Today we had lunch in our conservatory – me, Thelma, Dave and Hannah. It was the first visit of a member of my family since lockdown, and I had made a complicated salad. The salad was disappointing, but the small scale drama unfolding before us was a big consolation. Ironically it would have been a perfect nature-in-lockdown subject!

Thelma and I had several times over the summer seen a mouse, or it might have been a vole, scuttling across the paved area just outside the conservatory to get to a different, and presumably safer flower bed. Today, as we got started on the lunch we saw this: 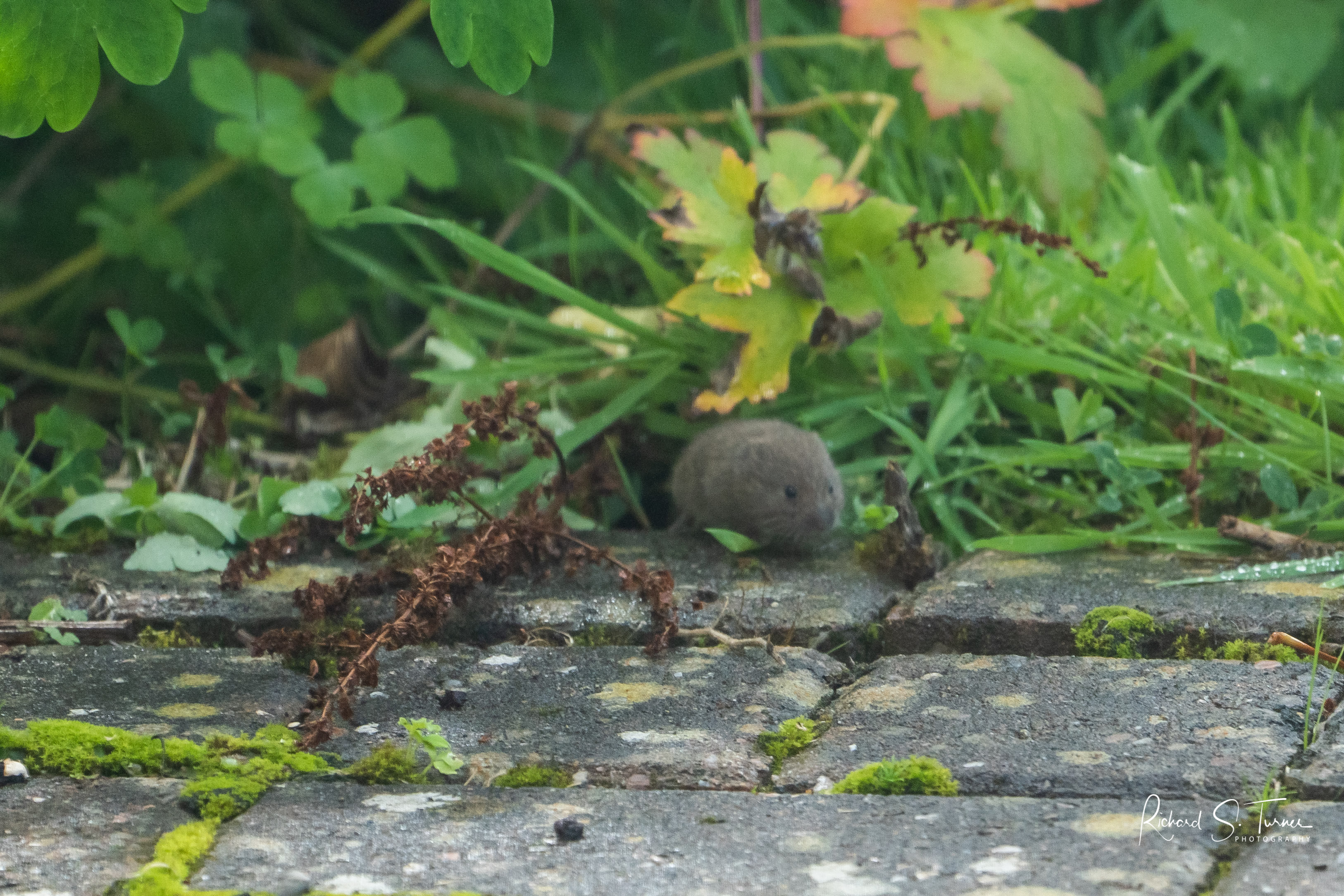 Before I go any further I must explain why this little creature is out of focus. The only way I could get the shot without scaring him off was to shoot through the double-glazed doors of the conservatory. The viewfinder shows a little square over the target which turns green when focus is achieved. I get the green square in the right place, press the focus button and then the shutter. I check the image on the screen and frown. I shot around 170 frames this afternoon and almost all were slightly out of focus. It took me a while to realise that I was shooting at an angle to the two sheets of glass which were about 25mm apart. What is going on, I think, is refraction. The two sheets of glass were bending the light before it arrived at the sensors in the camera. The camera/lens combination then drives the autofocus motors which adjust the position of the lenses inside the lens body so that the bit inside the green square is sharp – except that in this case it was not. Since the light was poor I had to use a wide aperture which gave a shallow field of view. You can see that bits of vegetation nearby are in focus but the animal is not.

Back to the animals. It became clear that this was a juvenile when the parent turned up. Seeing the bigger ears, I thought at first that this was a family of field mice, but then saw the short tails – they were Short-tailed or Field Voles and were obviously straying out of their safety zone. Here is Mum: 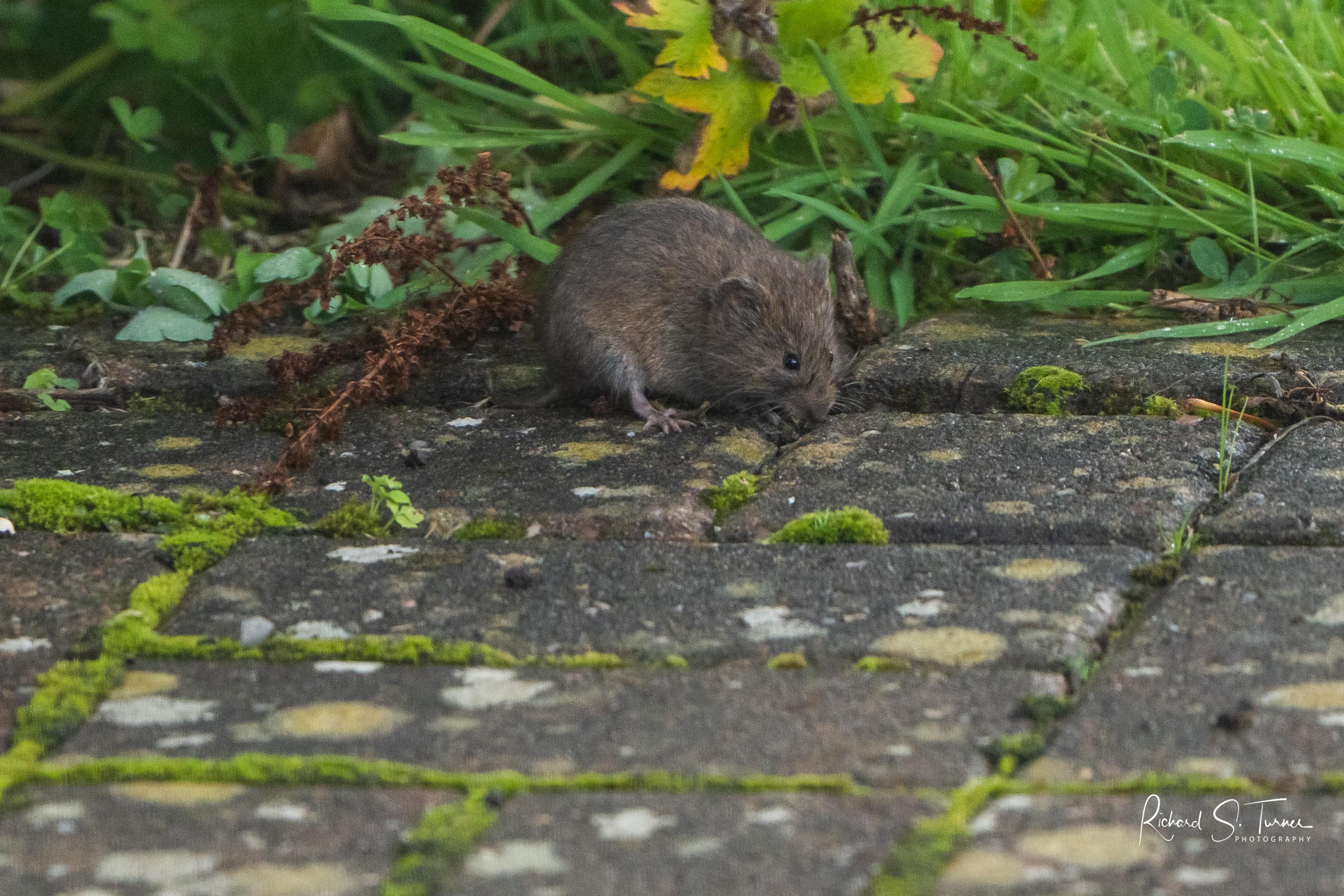 She dashed to and fro trying to get them to follow her but they retreated to what I assume is the nest hole. 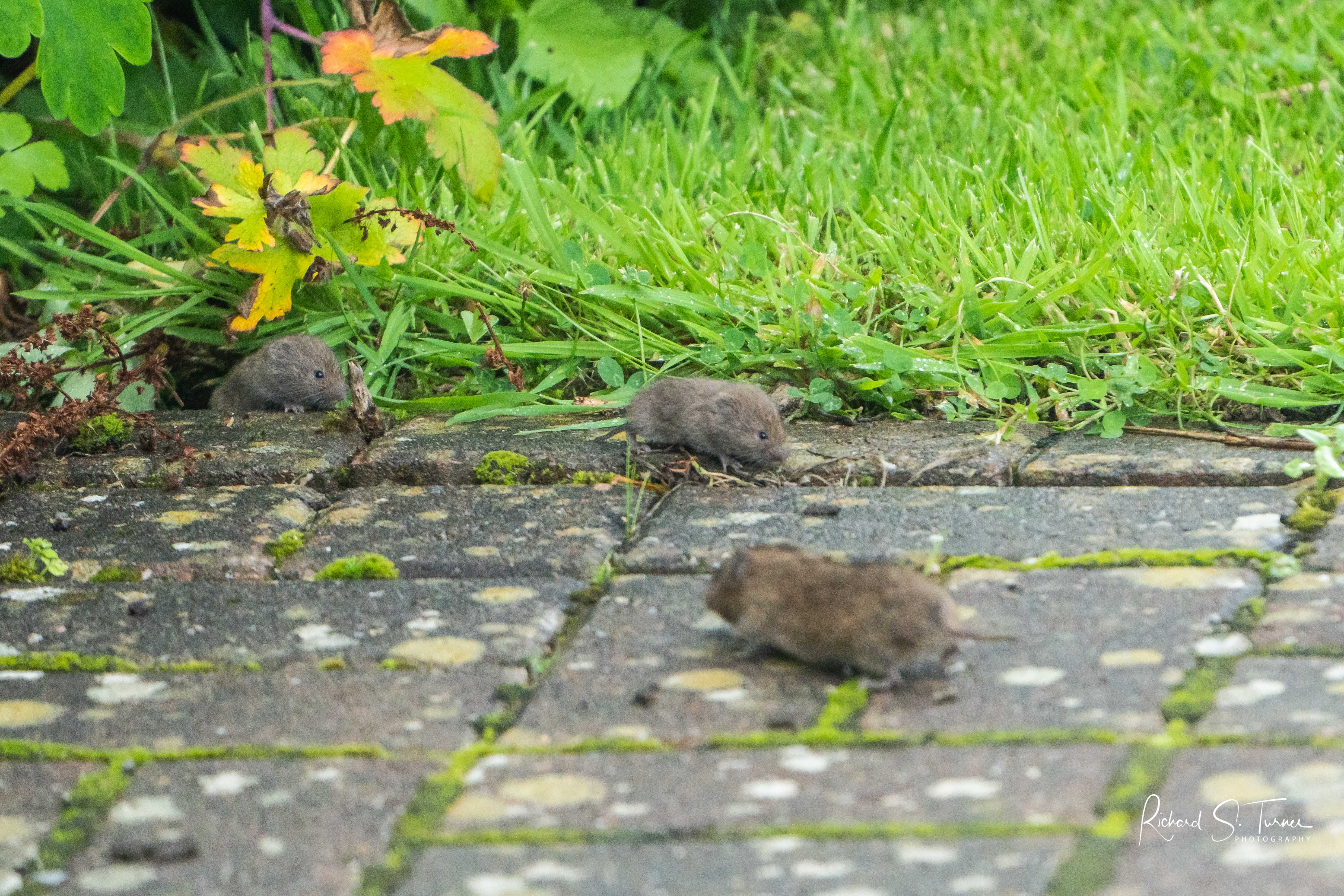 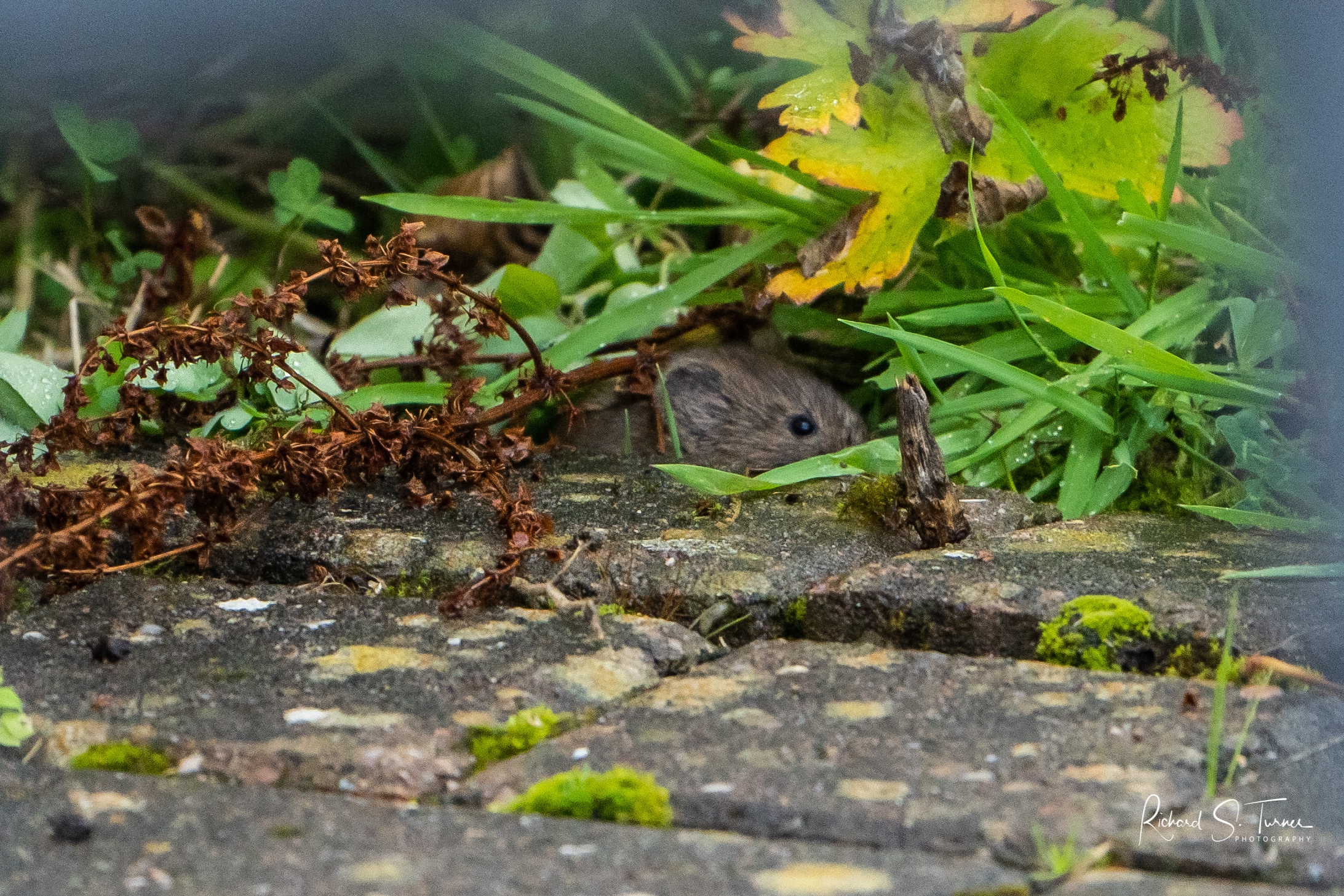 Poor frantic Mum then gave up on persuasion and resorted to force: 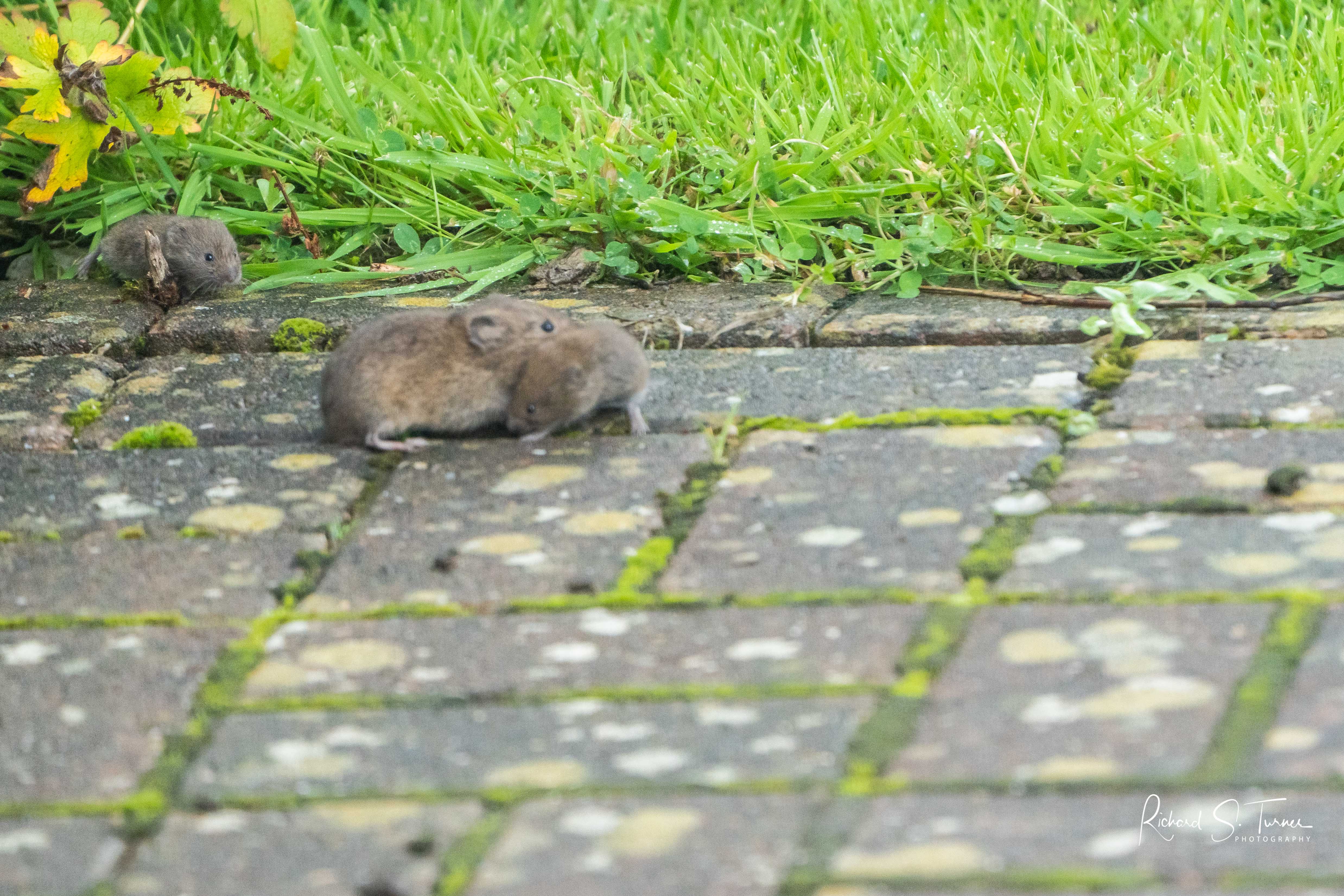 Imagine picking up a teenager with your teeth and carrying her 100 metres or so! These voles are strong, and that wasn’t the end of it. The same pattern was repeated as more youngsters appeared. I was too busy trying to get the autofocus to work so didn’t count, but I think she picked up three more. 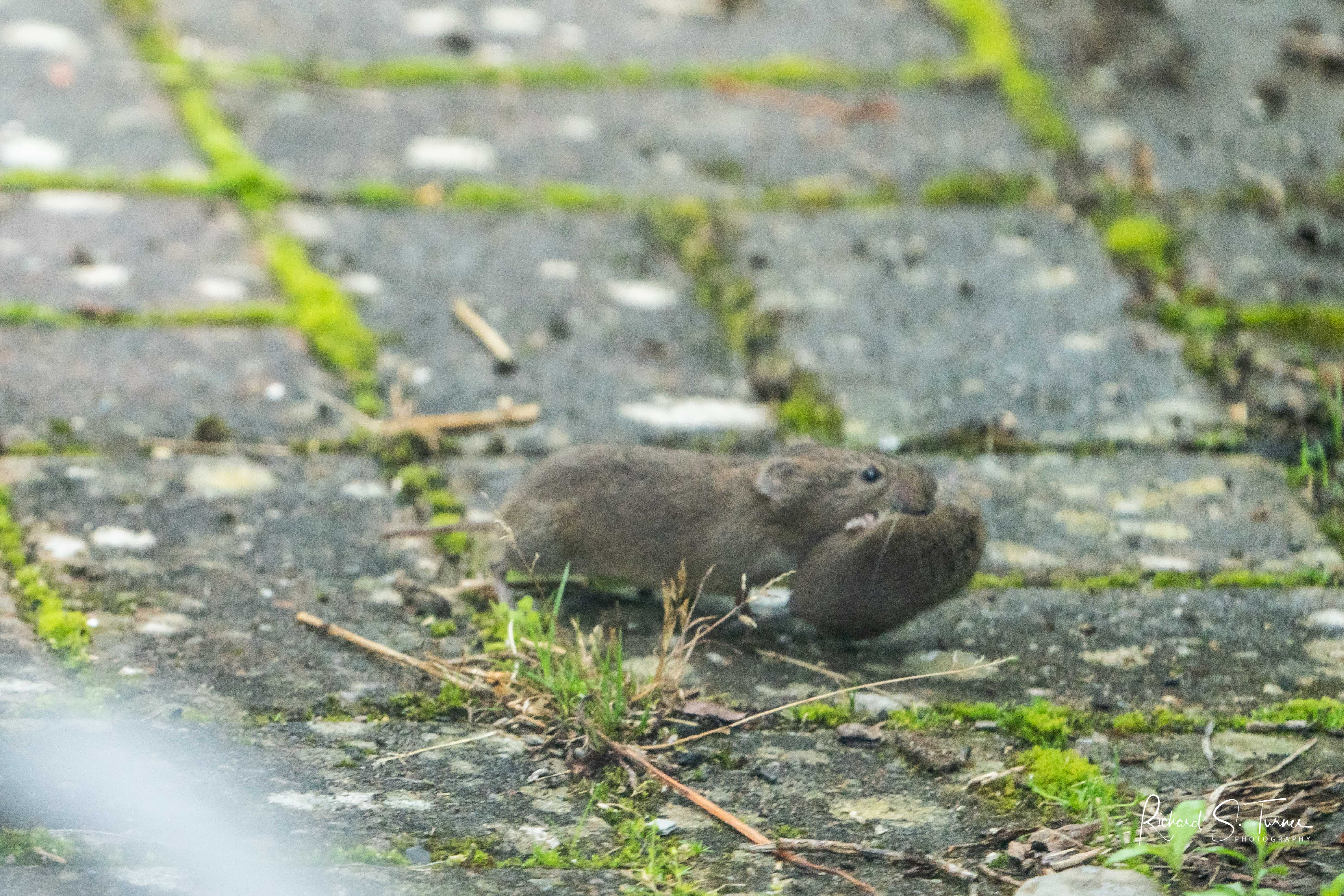 Forks were poised in mi-air as the drama progressed. It was difficult to tell if she was aware of the watchers. If she was it showed great courage to rush back into the danger zone each time. Perhaps though she was used to our presence and full speed ahead is the normal pace for voles. I have much to learn about these charming creatures. Start here if the same applies to you: https://en.wikipedia.org/wiki/Field_vole

8 Responses to A Family Drama