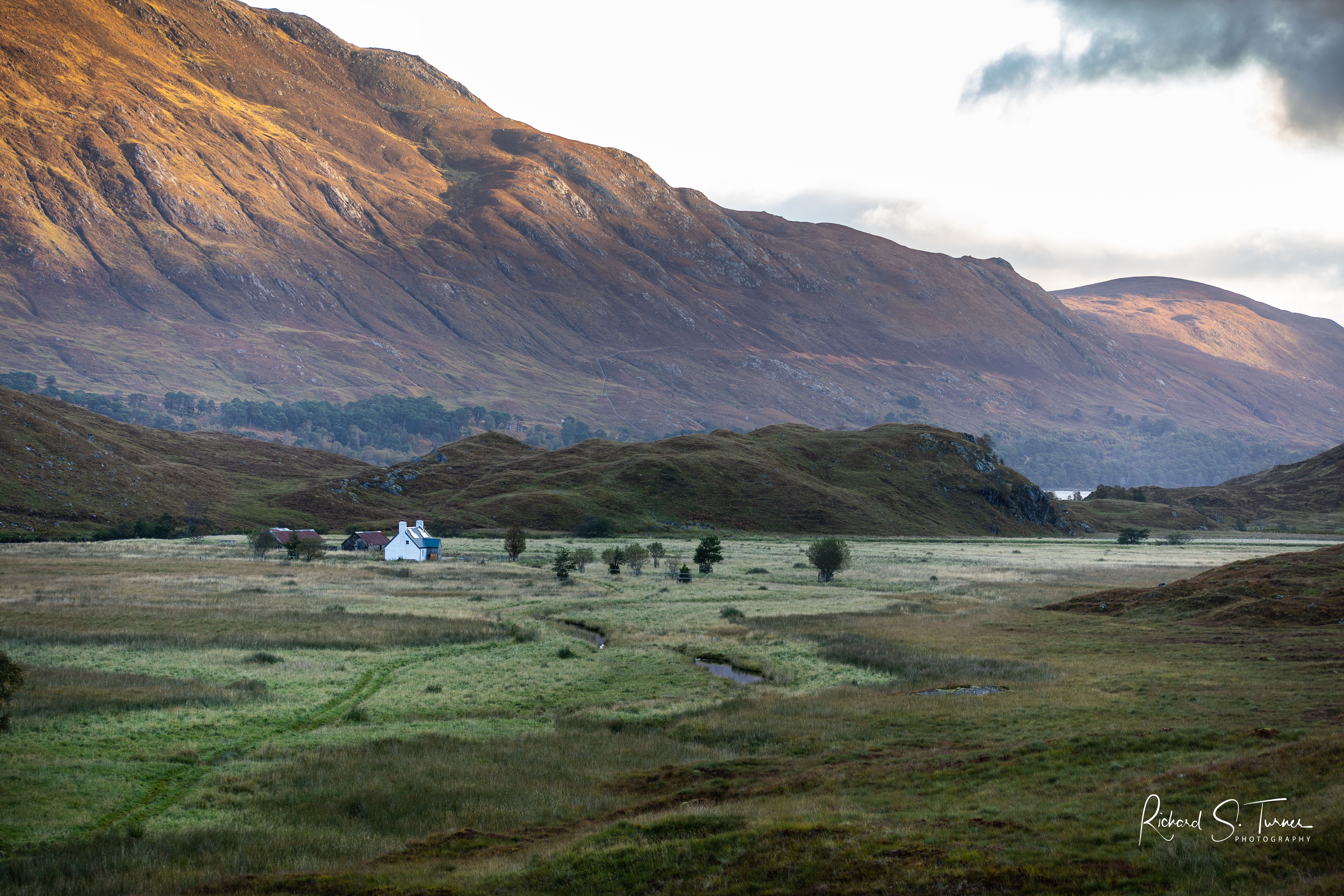 On the map it looked impossibly remote, but this is Glen Affric in the Scottish Highlands, one of the most popular tourist destinations in Europe, and  there are few times when there are not walkers, hunters, even vehicles coming and going along the very rough 5 mile track. 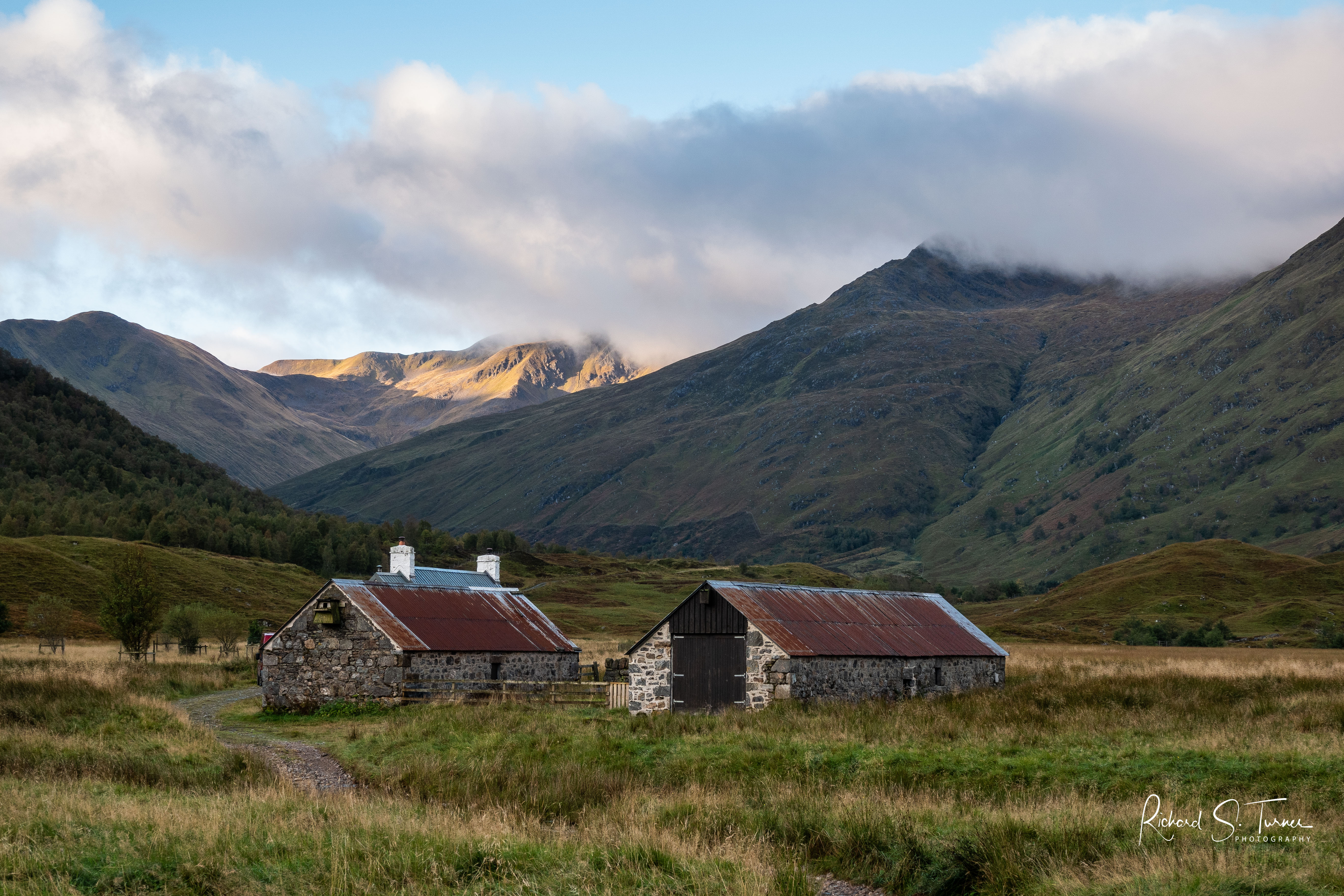 I’m here to plant trees for the charity Trees for Life https://treesforlife.org.uk/ who are one of the organisations restoring the ecology of this northern part of the Highlands. Together with the Scottish Forestry Commission, several private estates, and the RSPB, deer numbers are being rapidly reduced and native trees are returning. It’s inspiring, unless you  happen to be a traditional game keeper (see later post.) 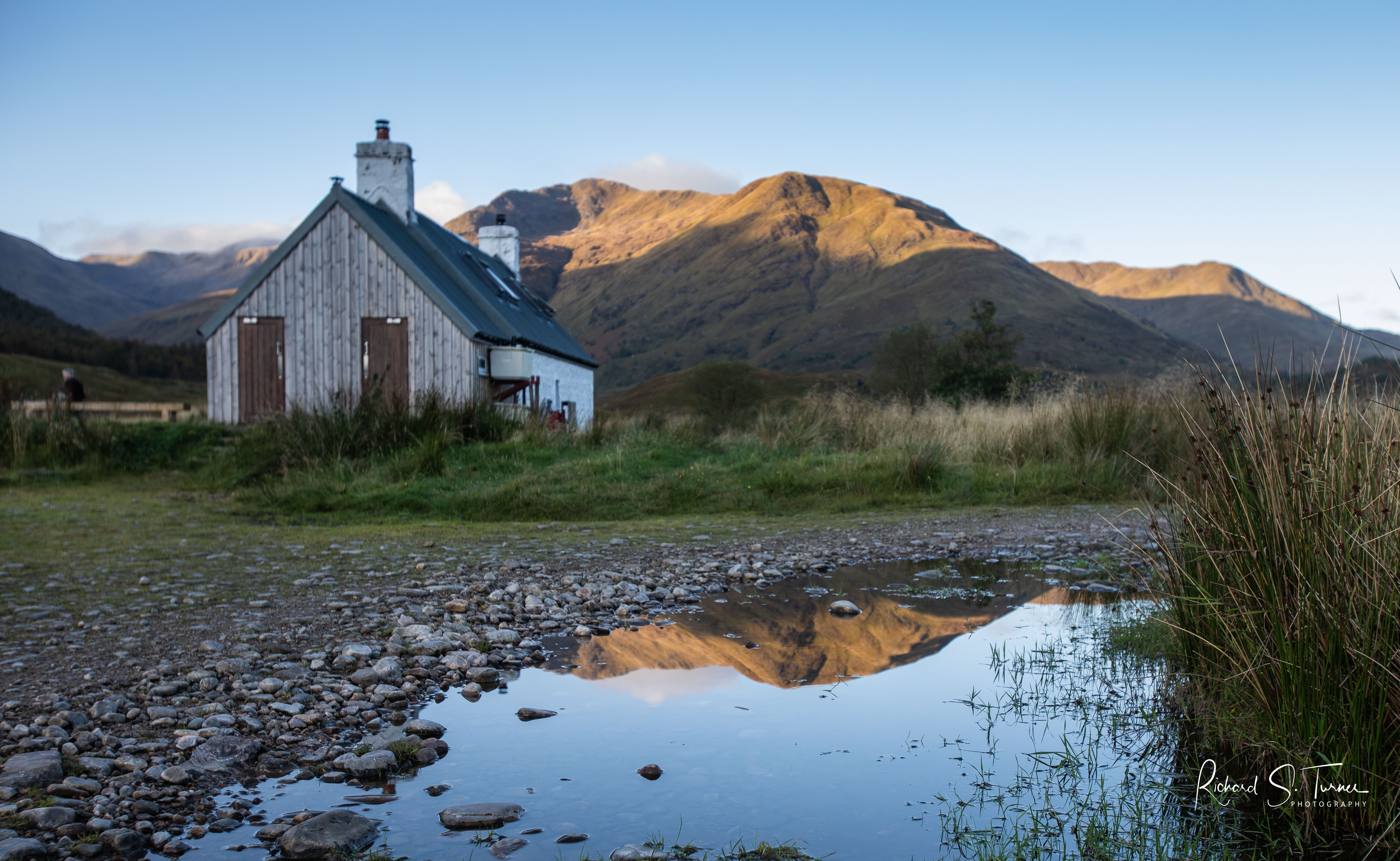 That little white building, once a rough walkers bothy is now very well insulated, has solar panels on the new metal roof, neat larch cladding round the extension. There are two rooms in the extension with two doors to the outside. One is a drying room with a wood stove, maybe two and a half metres square. The other, the same size, houses a single throne set grandly off the wall with a big empty space in front of it and a deep pit beneath it. Round the walls are a urinal, a shelf with rolls of paper and hand sterilizer, a bin for sawdust to throw on the crap, and that’s about it: no washbasin, no shower, no water.

There is a tap above the sink in the bothy, but it connects to a limited supply of filtered drinking water, and we are not encouraged to use it.

“We drink the burn water and it’s fine” Rachel tells us.

The burn water is only a few yards from the door, but has to be collected in black plastic buckets and carried in. It is certainly clear and tastes fine. The burn is, as you would expect, frigging cold, but this doesn’t stop the more competitive of our fitness freaks from washing and even bathing in it! I’m proud of my hot water supply and have not the slightest intention of washing, let alone bathing, in bollock-shrivelling water.

Cooking, and especially washing up, involves boiling up numerous kettles on the gas stove, supplemented by a big pot on top of the wood stove – a hefty affair with an oven on top of the big fire box. The bothy being tiny and very well insulated the stove rapidly heats up the main room to such a tropical temperature we have to have the door open. Only the hardiest can sit at the stove end of the group of tables we eat round.

From outside, you open the door to the porch and the ceiling LEDs come on: racks for boots and hooks for coats. Then another door and a passage with bunk room on the right, stairs ahead to the loft with two more bunk rooms, and main room on the left. it’s clean, bright, pictures, a mural of a tree, spotlights, wooden floor, several melamine tables which shuffle up together and lots of fold up chairs. There’s a built-in couch along one wall with cushions, and a narrow kitchen off to one side. Along the wall behind the kitchen cabinets are a row of buckets filled with water from the stream. We dip jugs into them to fill the big kettles on the gas stove and to wash up.

I had expected to leave the campervan in a car park 7 miles back up the track, but thank goodness I was allowed to bring it to within 50 metres of the bothy. How I would  have coped with getting up every 2 hours in the night for a pee – my usual problem – I don’t know. It was a welcome refuge, but another big factor (severe hearing loss being the main one) in my feeling of exclusion from the group.

I always intended to take interior pictures, but never got comfortable enough with such a large group in such a confined space. The pictures got postponed.

Seated around the tables are 11 men and Rachel. She and Dominic are the staff. He is tall, willowy, bearded with a long pony tail. Graceful of movement he makes eloquent gestures with his hands when explaining details of biology. Rachel is fortyish, attractive, friendly, articulate and cheerful. The other ten of us range in age from twenties to Nigel who is 2 years older than me even. They include 3 GPs, Nigel, Simon and David, a young Pole, Marius, just one Scot, Graham, Bob, a cheerful Yorkshireman in his sixties, Alan, a bright-eyed graduate, doing a Masters in Biology, and the inscrutable Tom, trendy stubble on head and chin, who says little but looks wise. Simon and David are both in their fifties, both slim and very fit, both good looking, both English. I’m horrified by the lack of female company, but they all seem OK. Will I manage to communicate with them? We shall see.

The atmosphere is cheerful. We are gratefully shovelling down plates of vegetarian Risotto prepared by Bob. It’s been a hard day and we are rapidly recovering from fatigue and a pleasant hunger.

The day began with a lecture from Dominic, a gathering up of tools and bags and long walk to the planting area. The walk, along a rough track, through bogs and streams, and with a few breaks takes two hours. 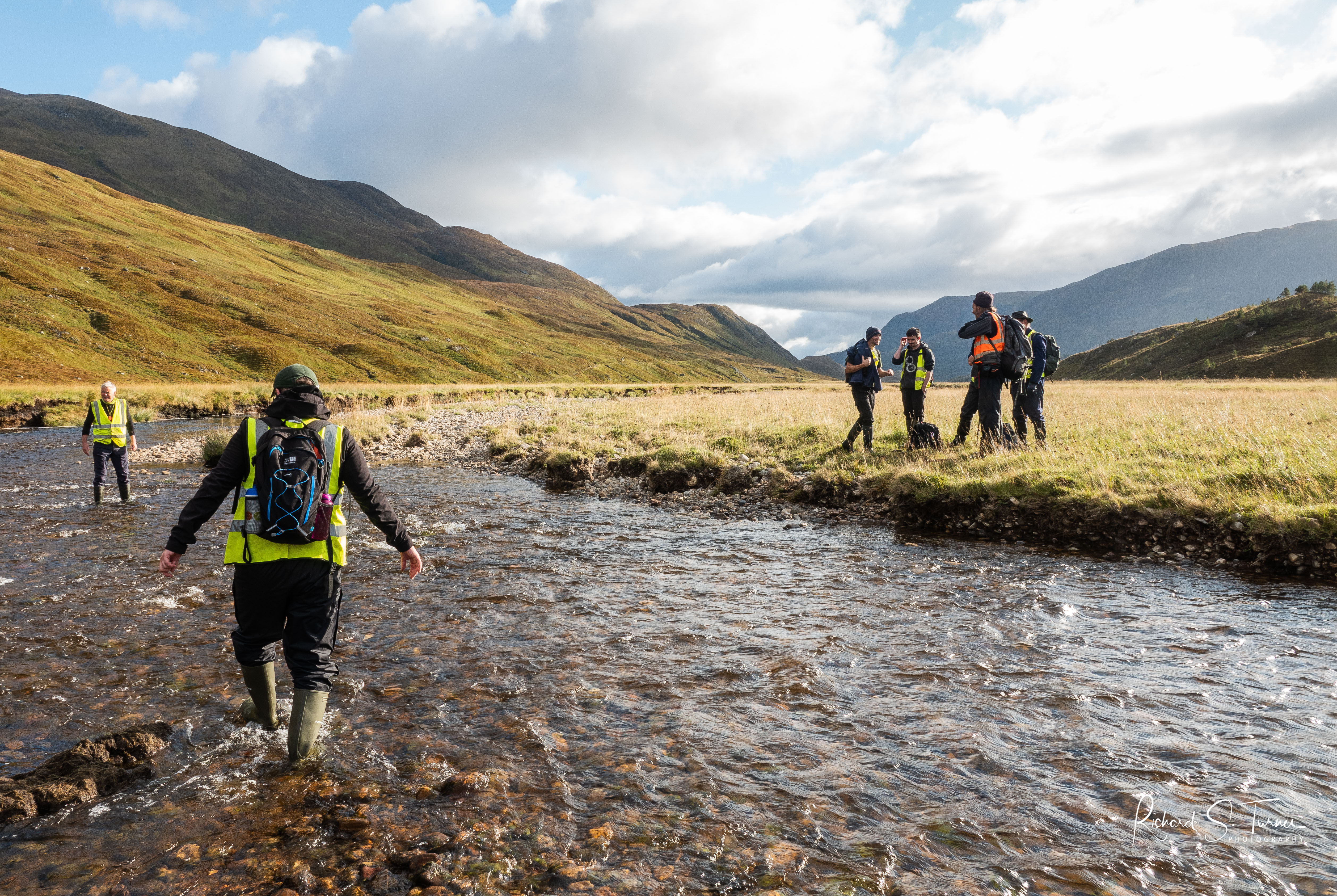 The trees we will be planting  – birches and willows in little plugs of earth – have been taken to within a few hundred metres of the gate to the “exclosure” a steep boggy hillside. An exclosure is an area fenced off against the Red Deer who roam the bare mountain sides and prevent any plant from attaining more than a foot in height.  We have to carry the heavy boxes of trees up through the bog to the gate. Then Dominic shows us how to plant them: very far from the simple spade in the ground, shove sapling in gap, firm it in and on to the next which I was envisaging. Each hole demands back-breaking work with mattock or spade to clear the stiff heather, moss, lichen and sedge before digging a neat hole, firming the plug plant in one corner, sprinkling with fertilizer, returning the sod upside down to the hole, and stamping all round. 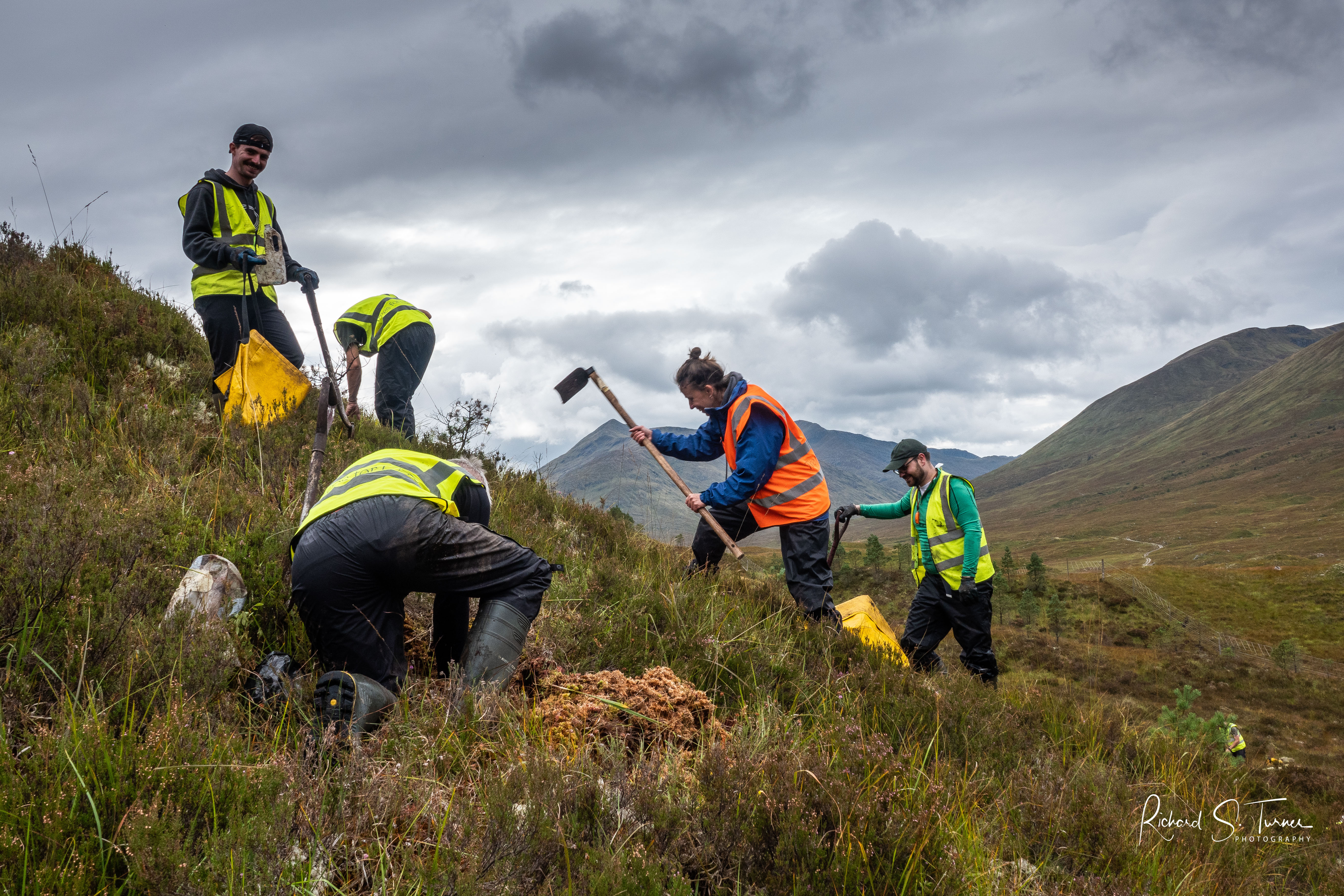 Somehow I get through the first day – a Sunday, but won’t pretend I’m not utterly exhausted when I get back to the van.