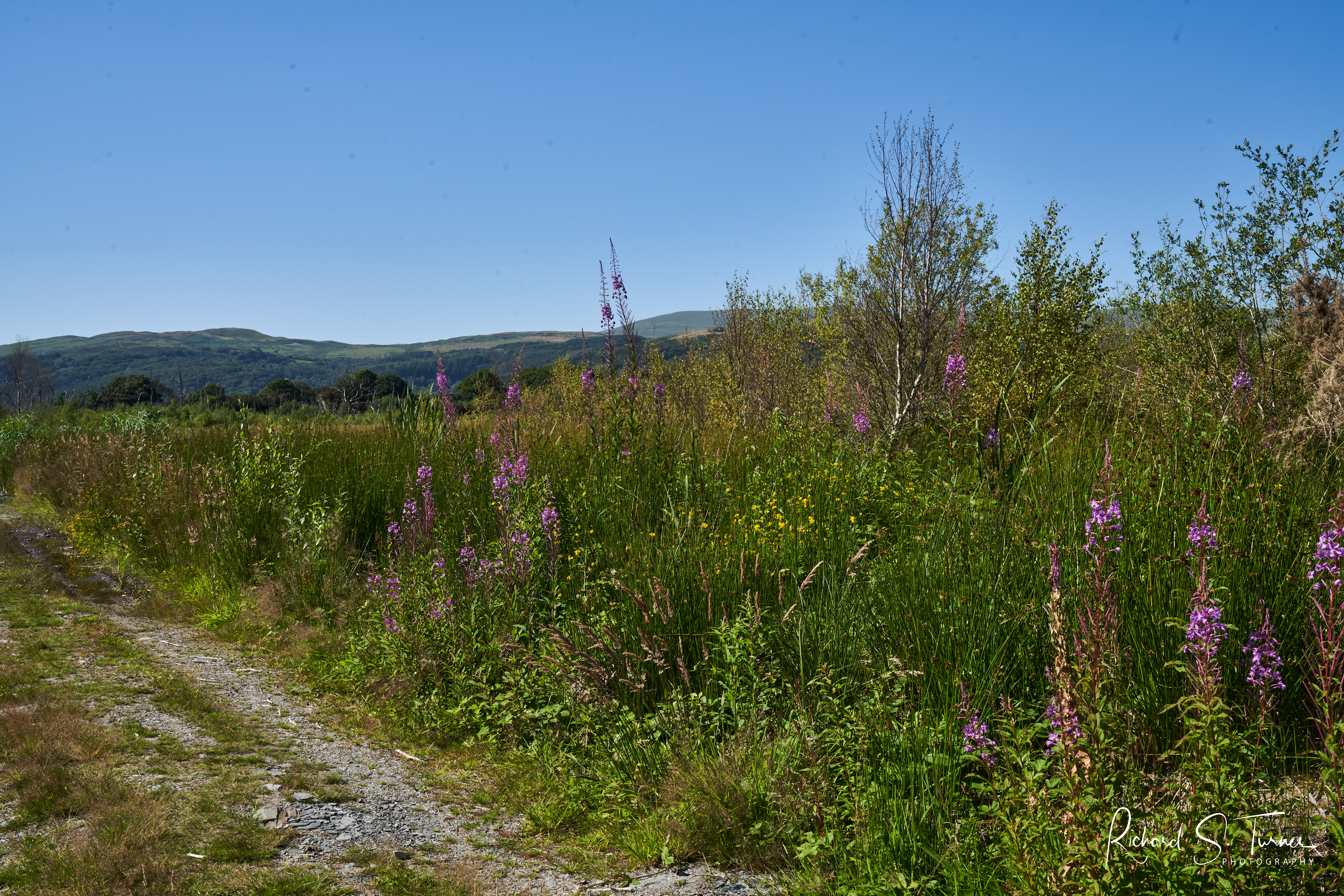 Hot weather for days on end in Wales – is this a taste of things to come? Do you love it or does it scare you? It must seem strange and exhilarating for visitors from Southern Europe to see how green everything is here. For these few weeks we  have the heady combination of temperatures in the high twenties and a landscape still green and growing. 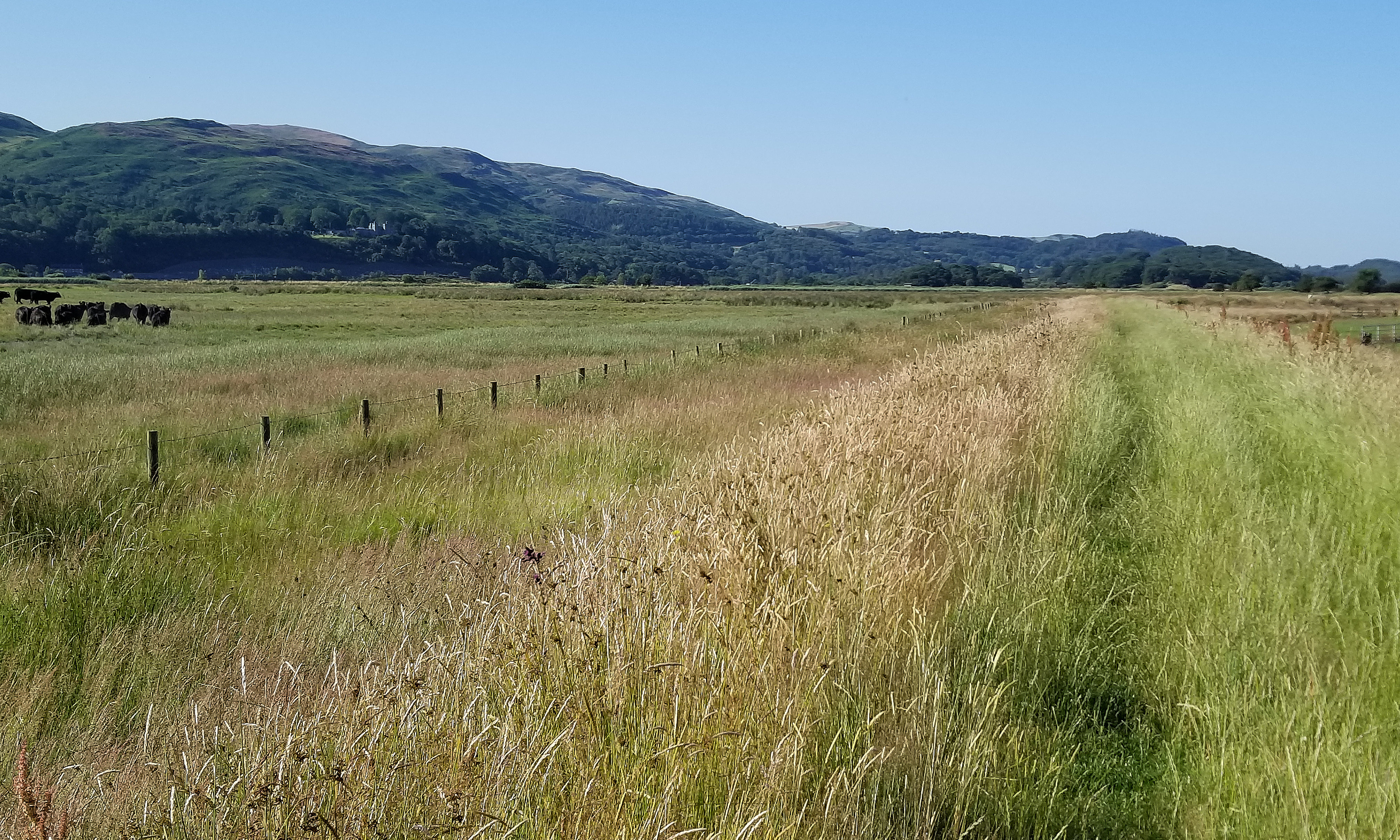 I spent much of my time this month trying out new lenses and new ideas in image making. One great delight has been capturing the faces and eyes of birds and animals half hidden by vegetation. This relies on the difficult technique of over-riding the autofocus manually and magnifying the image.  These were a Fallow fawn at Dinefwr Park, and a Sedge Warbler at the Dyfi near Machynlleth. 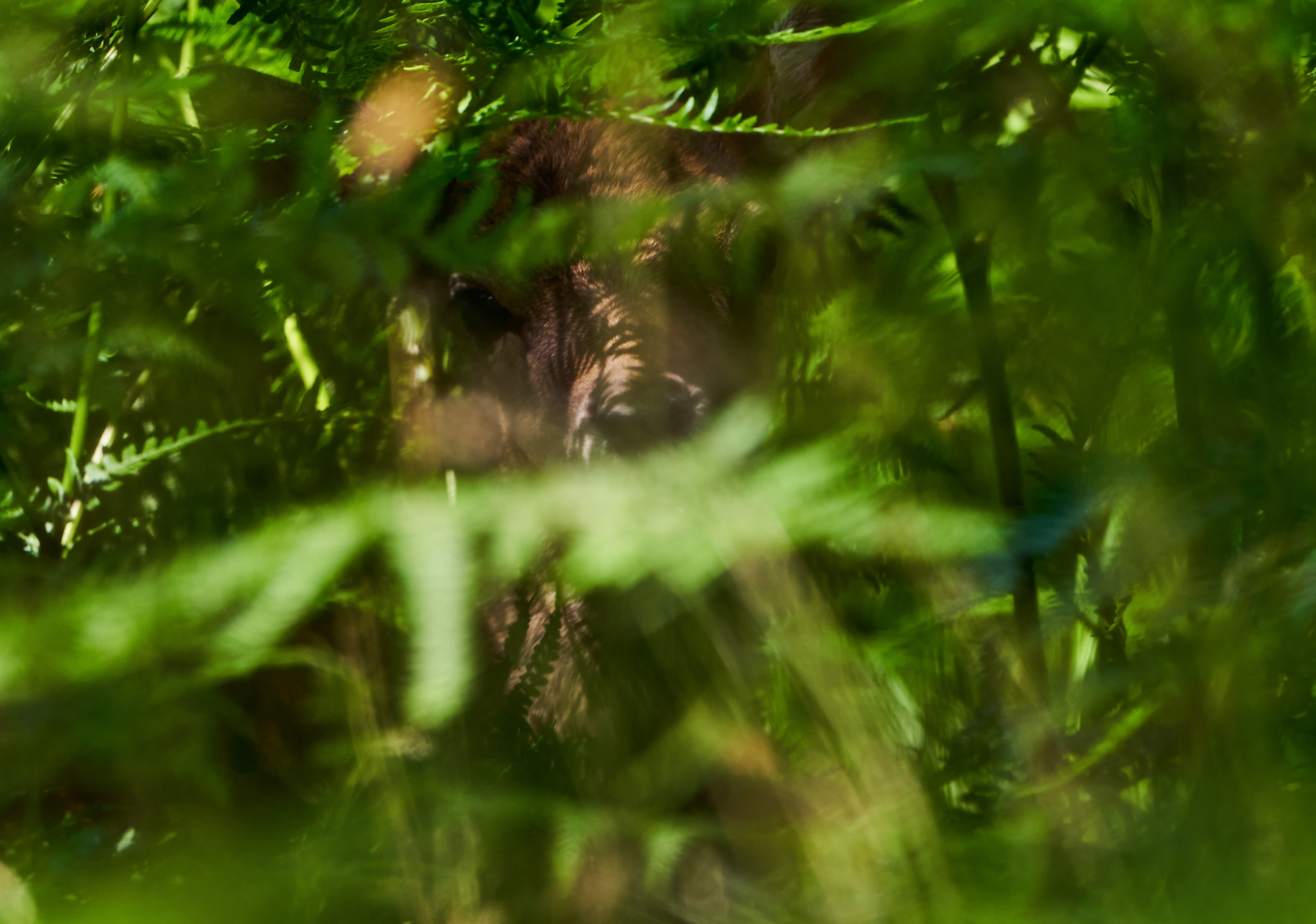 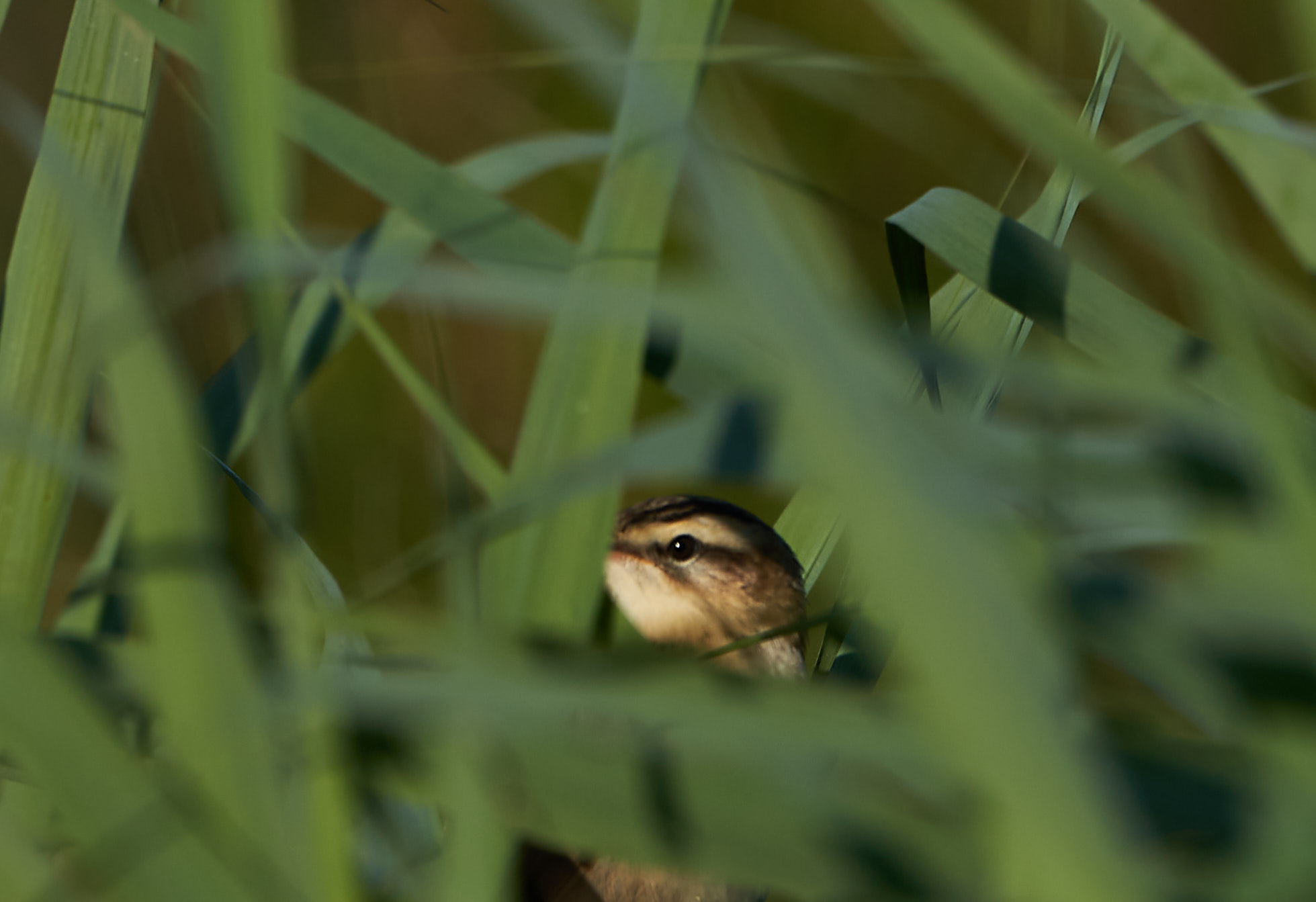 This month I finally finished our multi-purpose garden building – Summer House, Man Cave, Garden Office, Shed, Bird Hide, Photo-Studio – any other suggestions? I spent several evenings sitting on the deck enjoying the evening light and how it picks out the beauty in flowering grasses, the white, pink and purple wildflowers and the tiny insects which live on them. 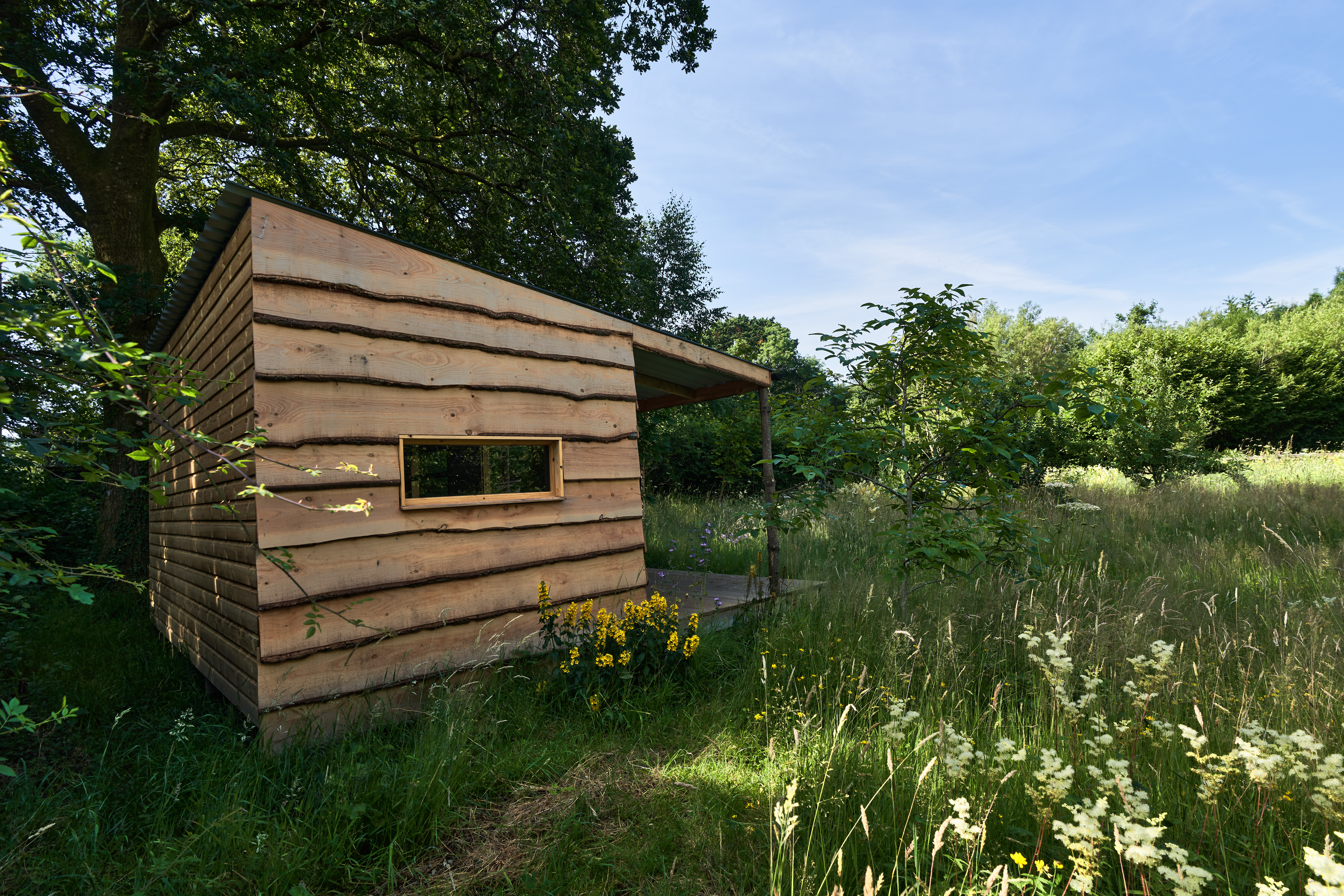 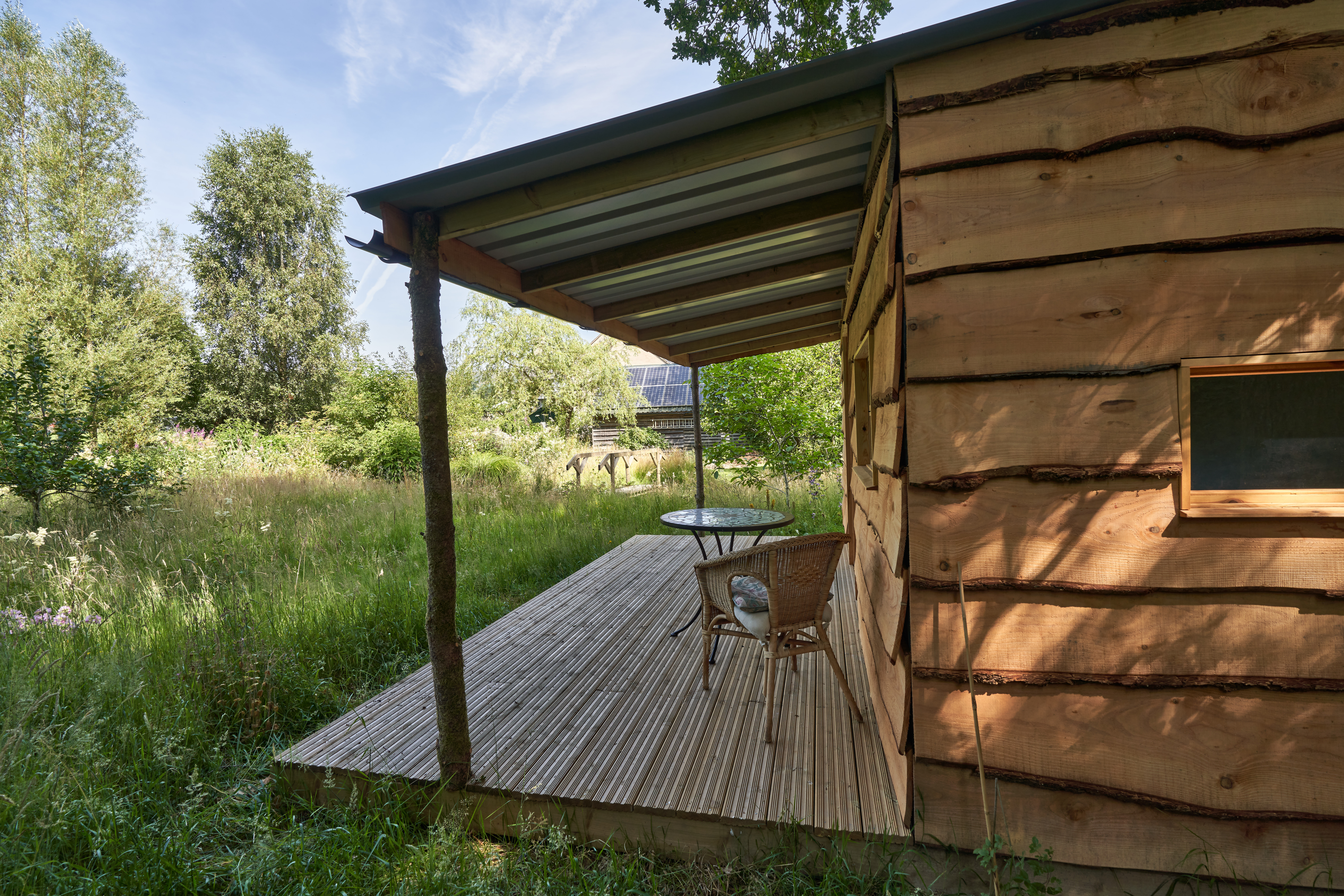 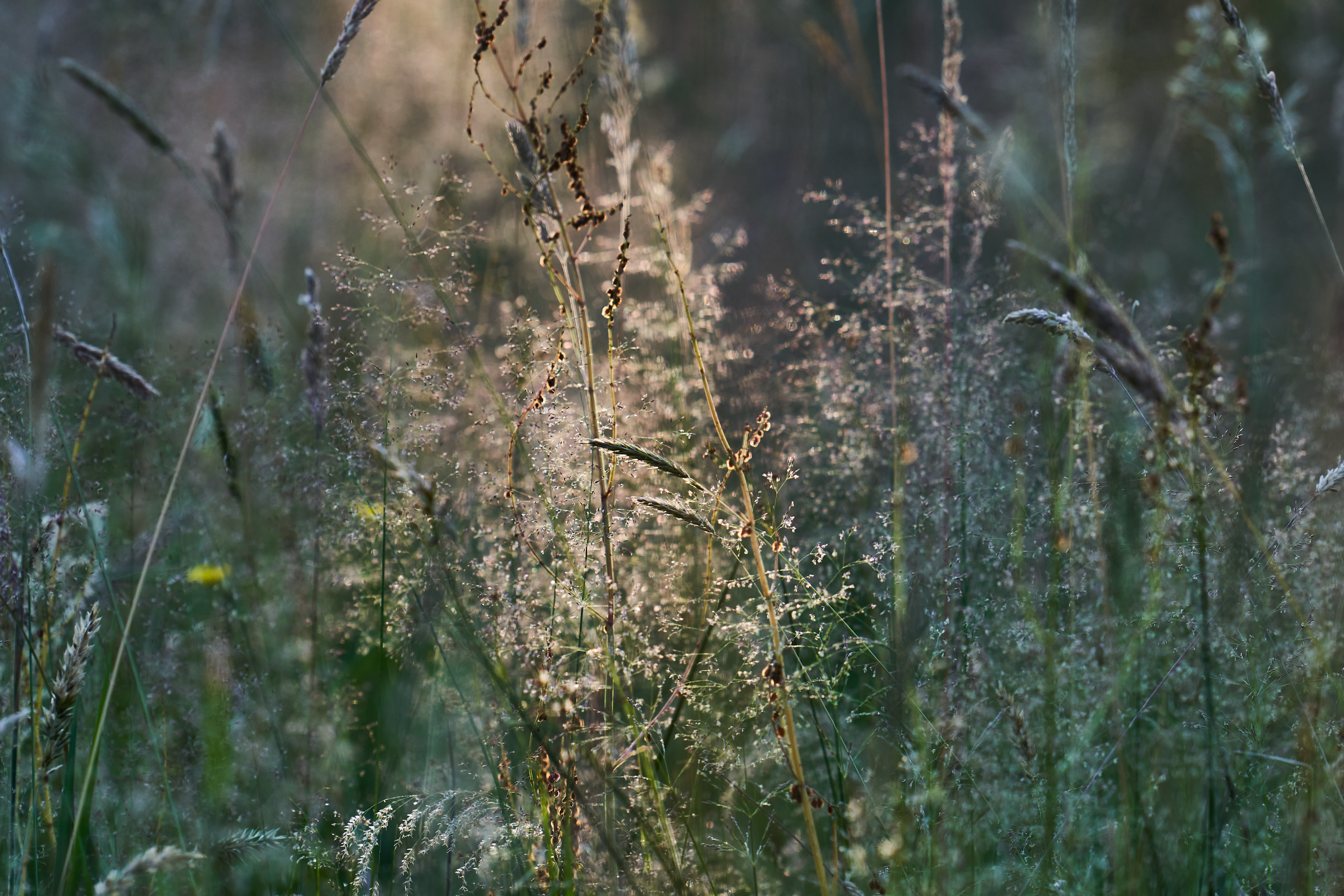 This is the aptly named Big Headed Fly, and below, a more familiar hover fly. 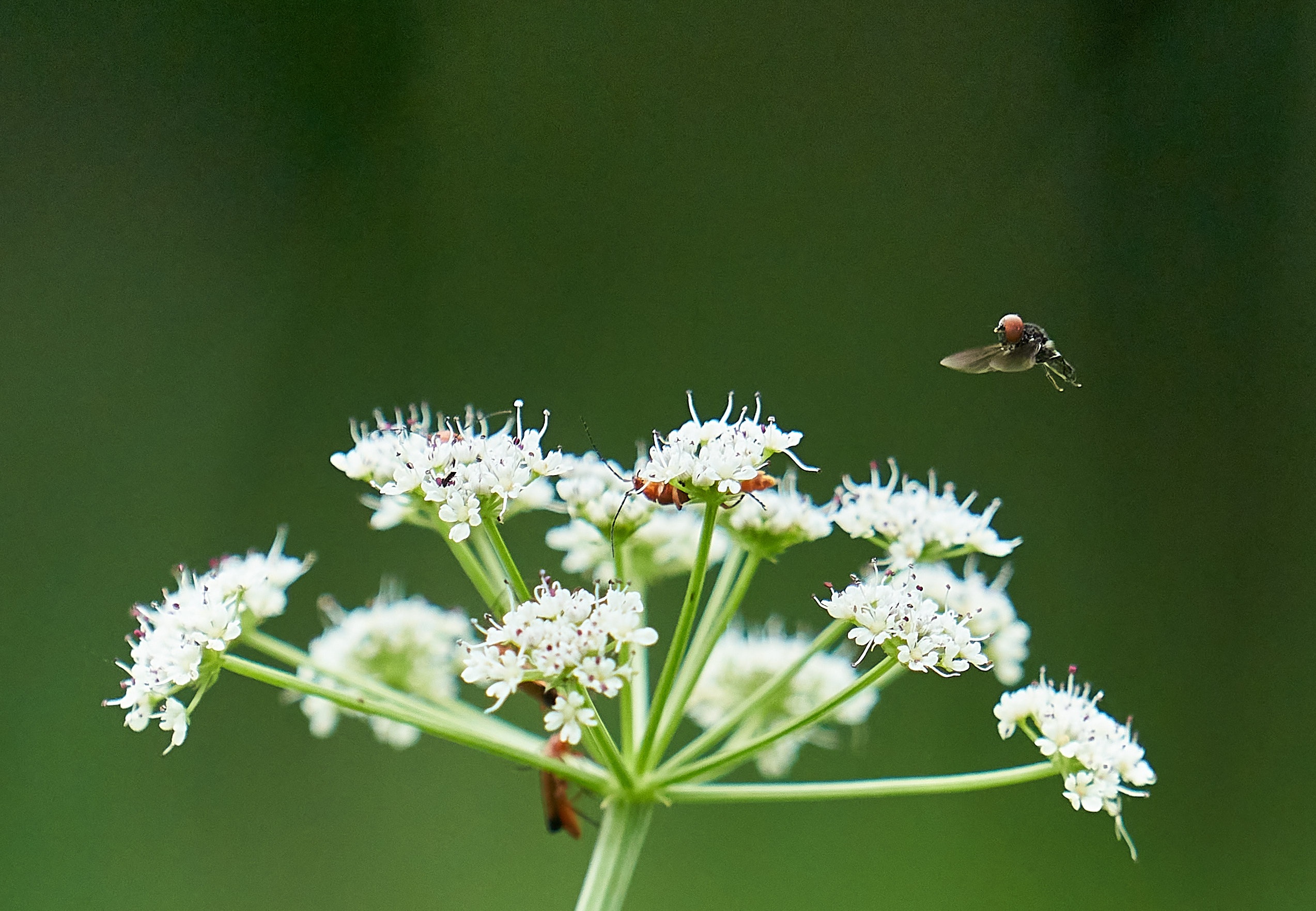 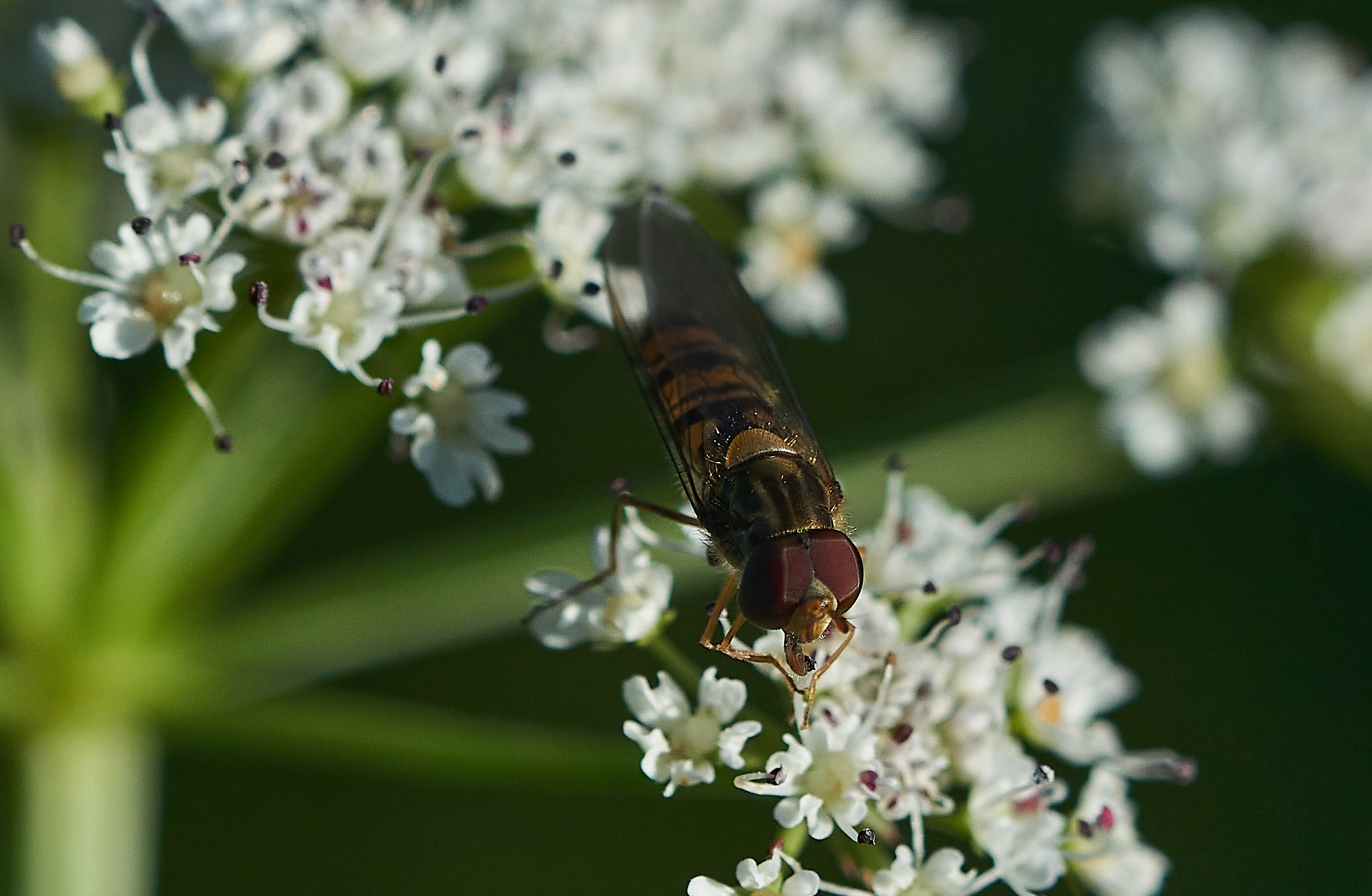 There seem to be millions of Soldier Beetles this year and I determined to try to catch one in their curious upright flight position – rather like sea horses swimming. 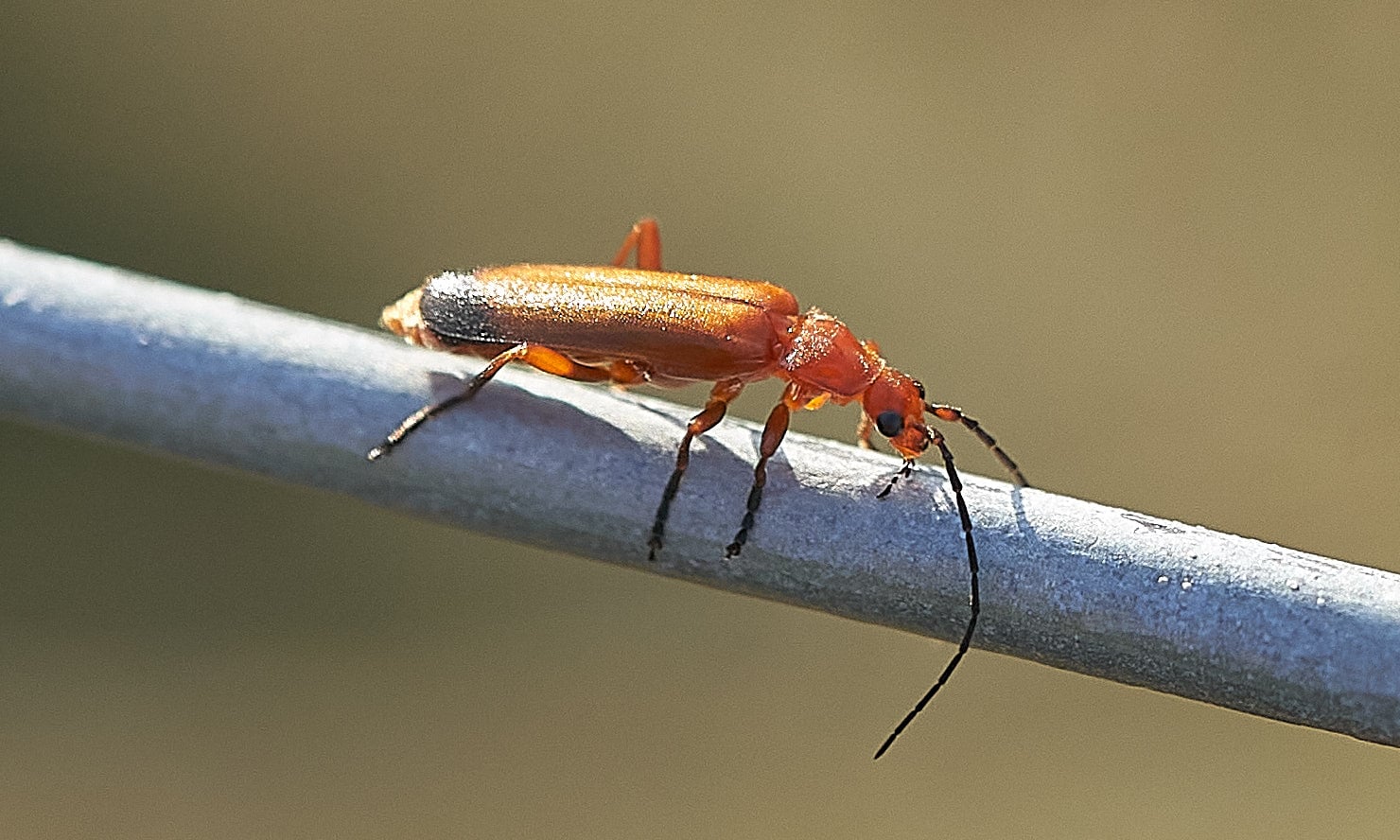 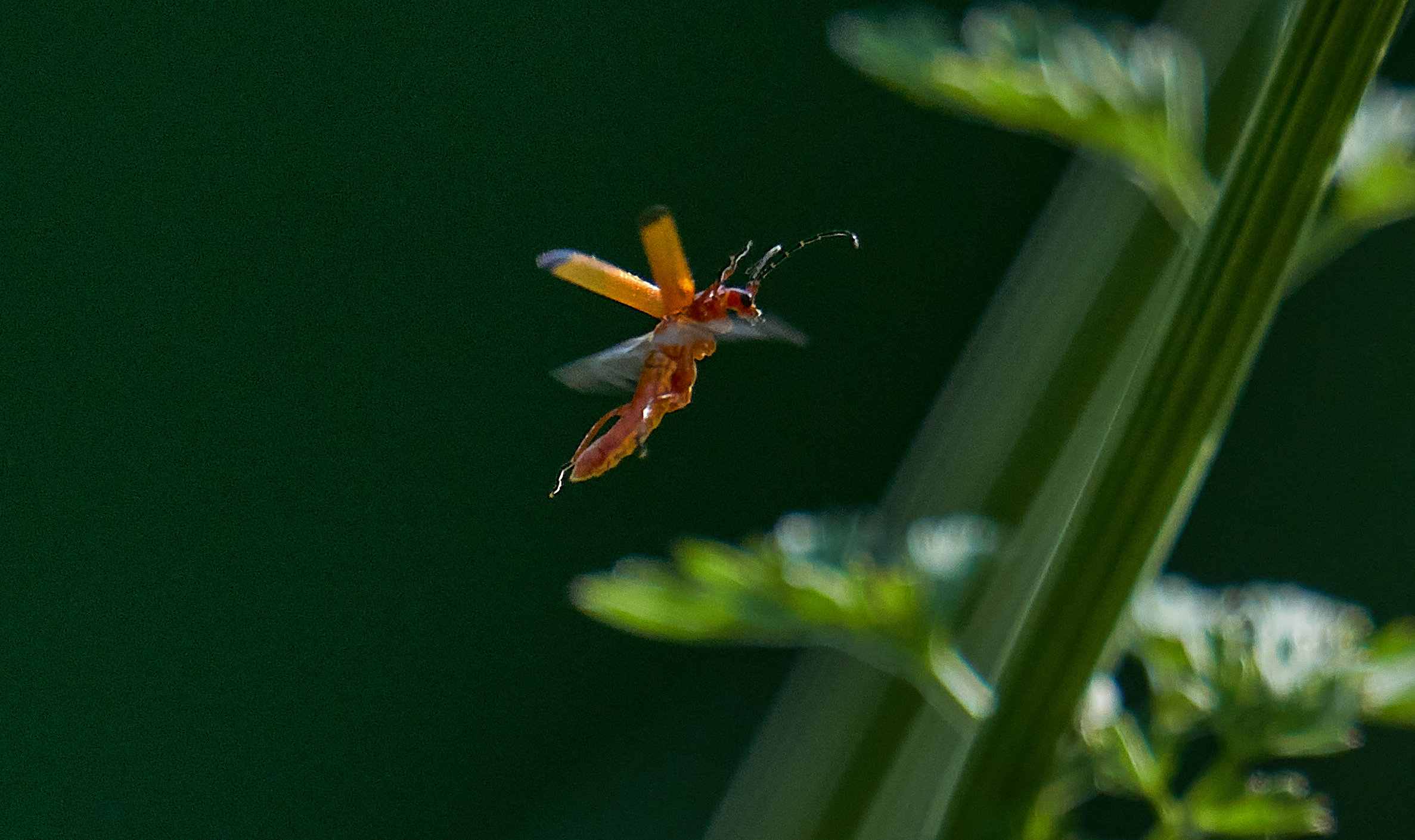 A walk through the beautiful Aeron valley from Aberaeron to Llanerchaeron and back  with family members Nina, Viv  and dog Louis went past some surprising allotments. 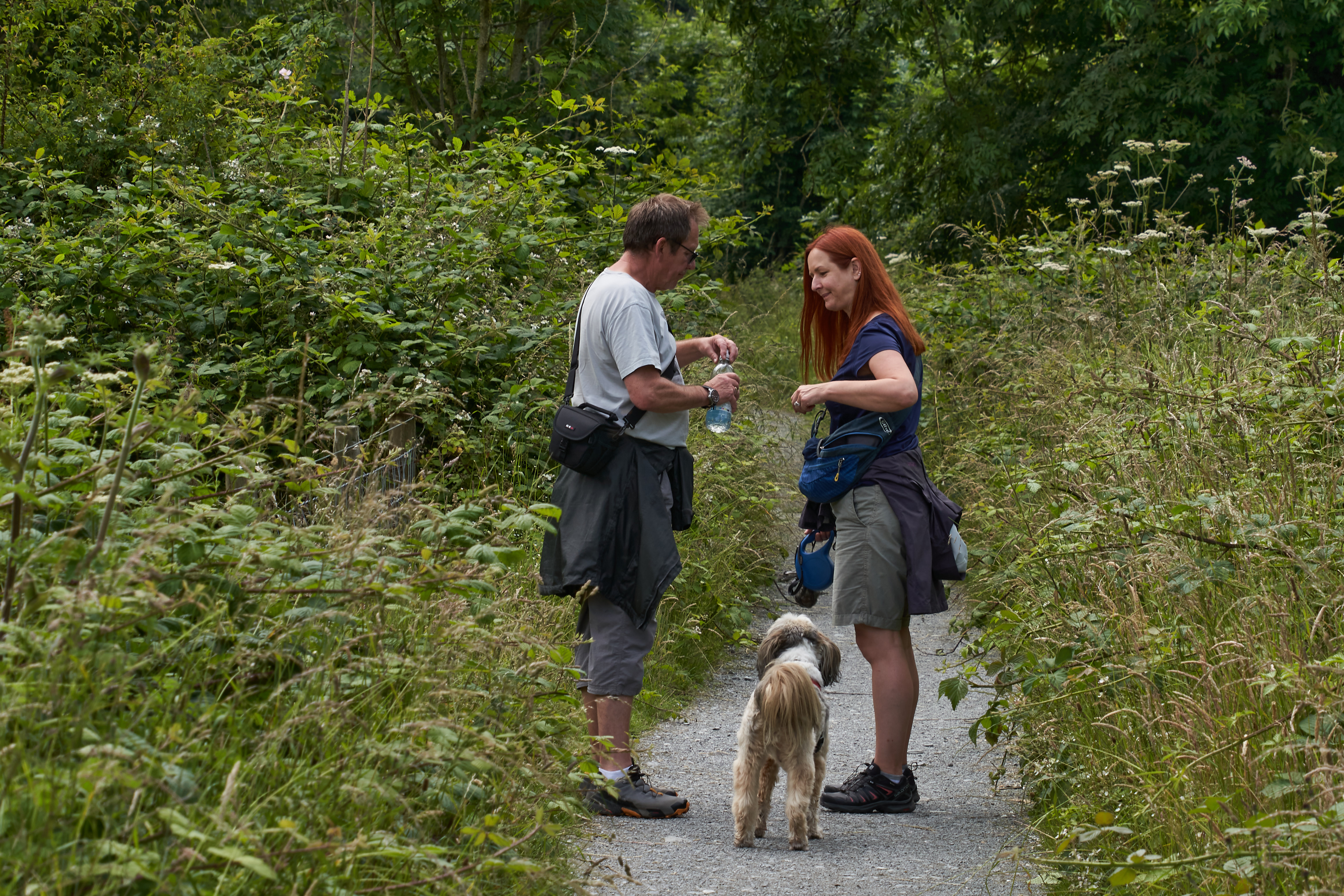 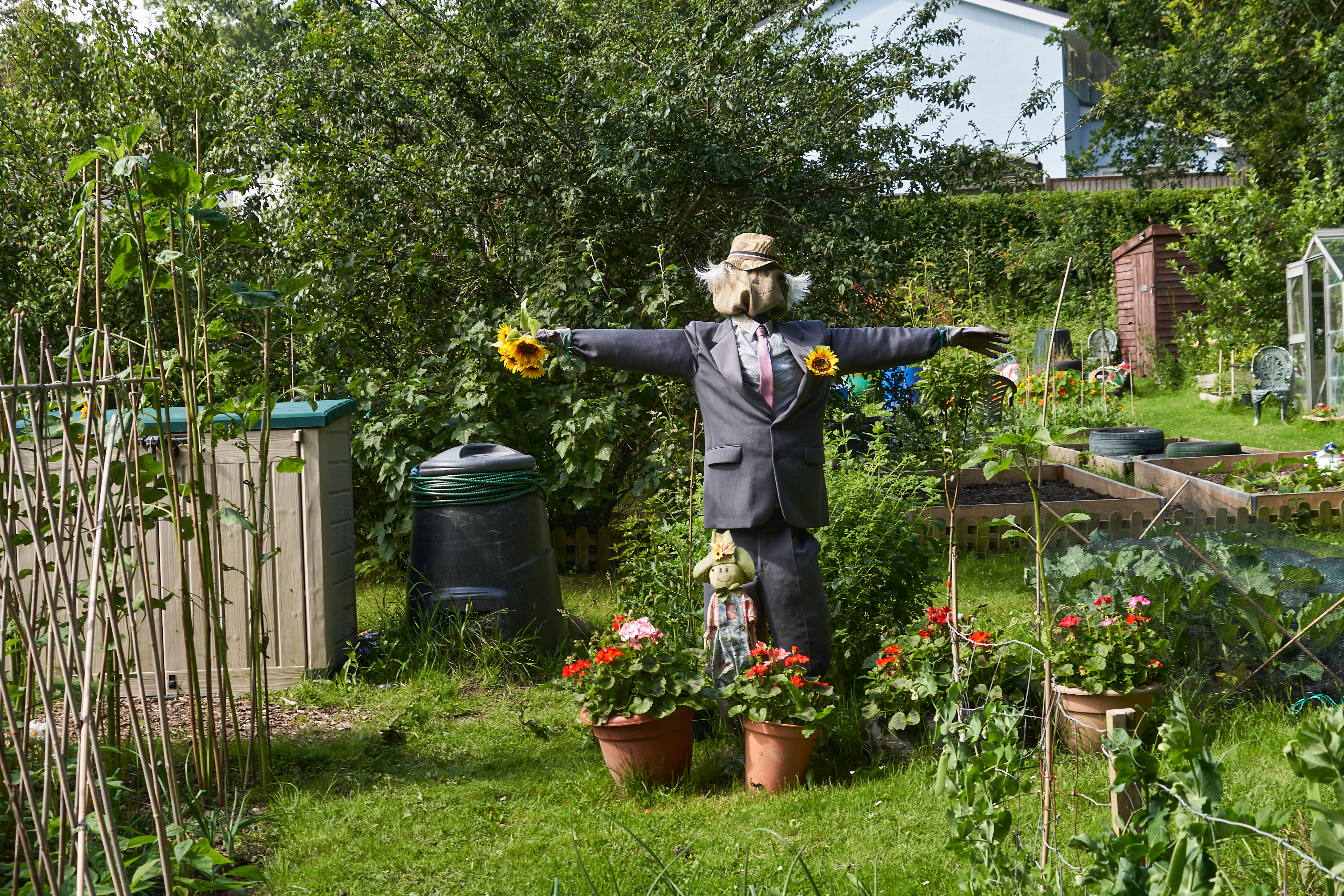 Landscape photography in Wales is always a challenge because typically everything below the sky is green. At the beginning of the month there were some glorious cloudscapes before the high pressure took over and cleaned up the sky. 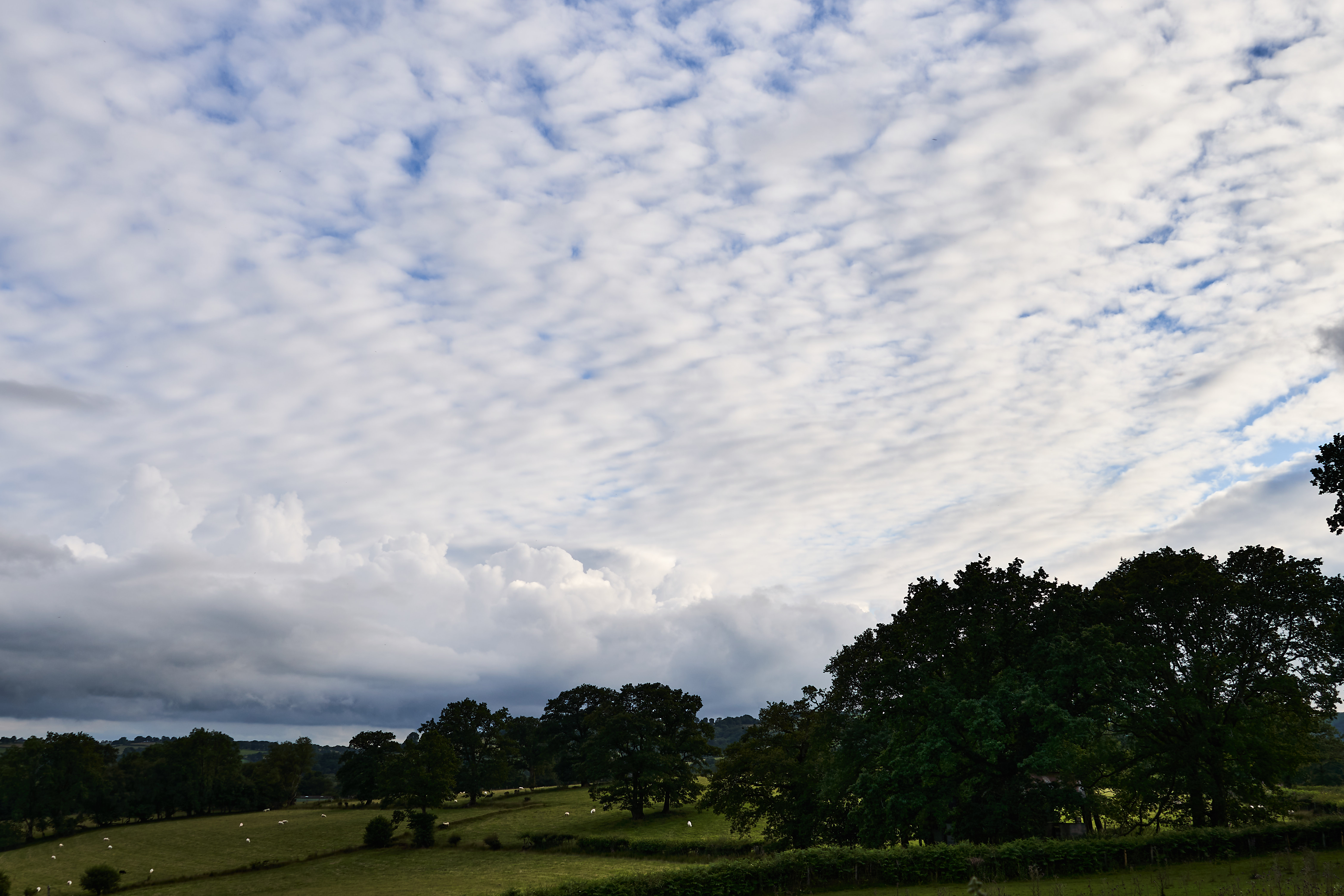 In high summer the land has a more varied palette and I captured something of the essence of the wonderful Ynyshir nature reserve on the Dyfi. 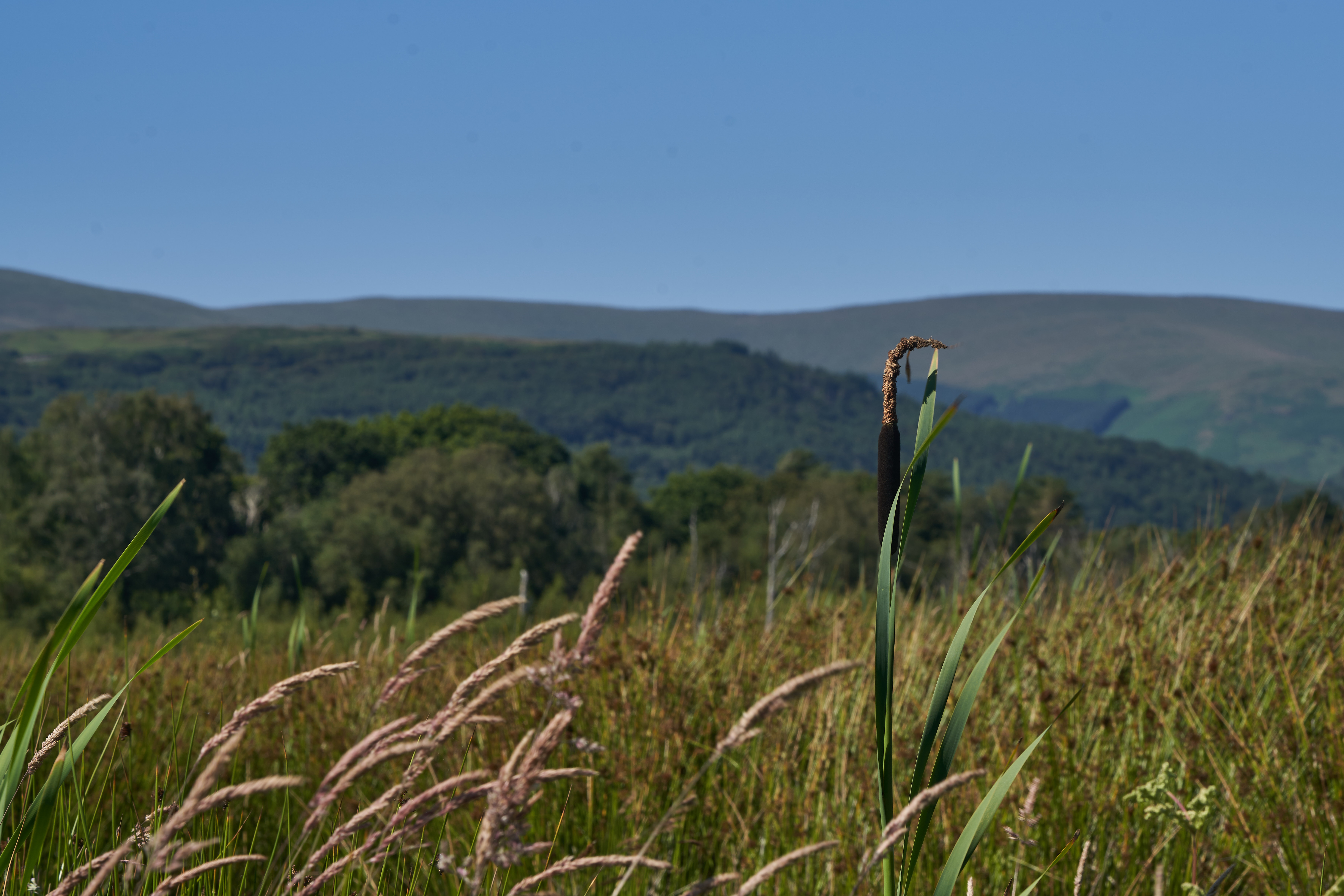 I was in the area for the Dyfi Osprey Project. These great birds were a joy to watch, but sadly my pictures, taken at a distance,  suffered from heat haze. These are some of the better ones. 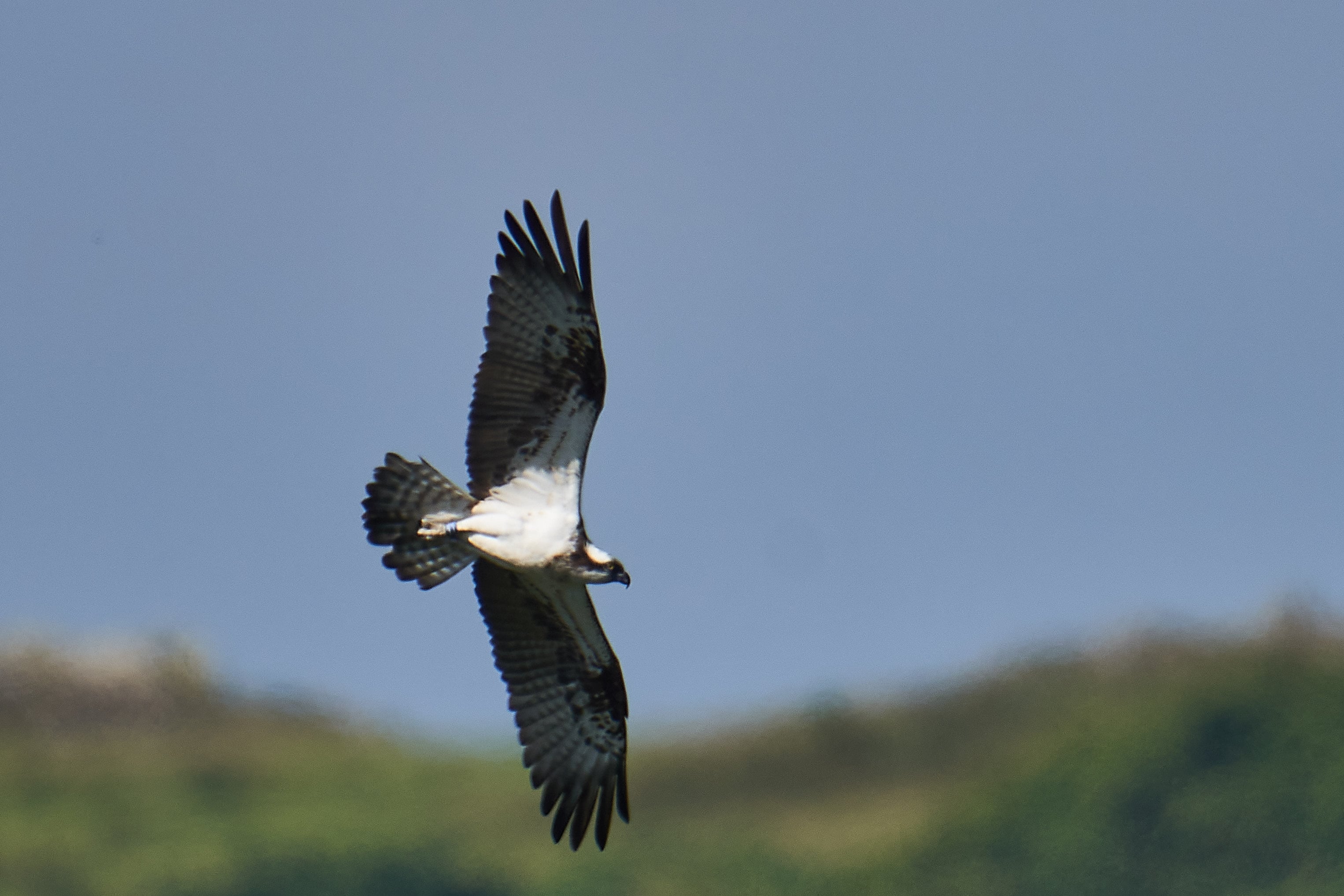 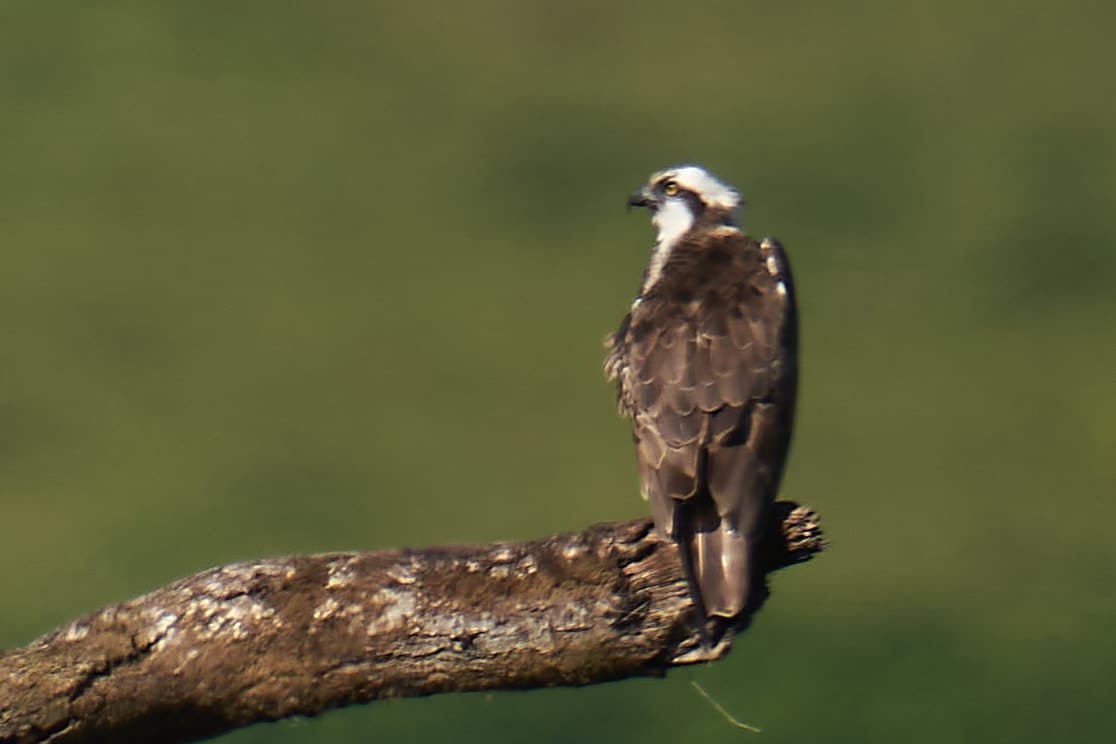 In the last week of July, driven by obsessive moods, as if trying to cram as much as I could into this untypical summer, I began trial shoots in the studio shed, cycled down to the old Towy bridge, and dashed off on a quick circuit of bird reserves – Llanelli, Newport and Slimbridge. I had little expectation of any exciting wildlife on our local stretch of the river, but was delighted to see a small family group of a bird  I had never seen here before – the introduced Mandarin Duck, which seems to be establishing itself in Wales now. 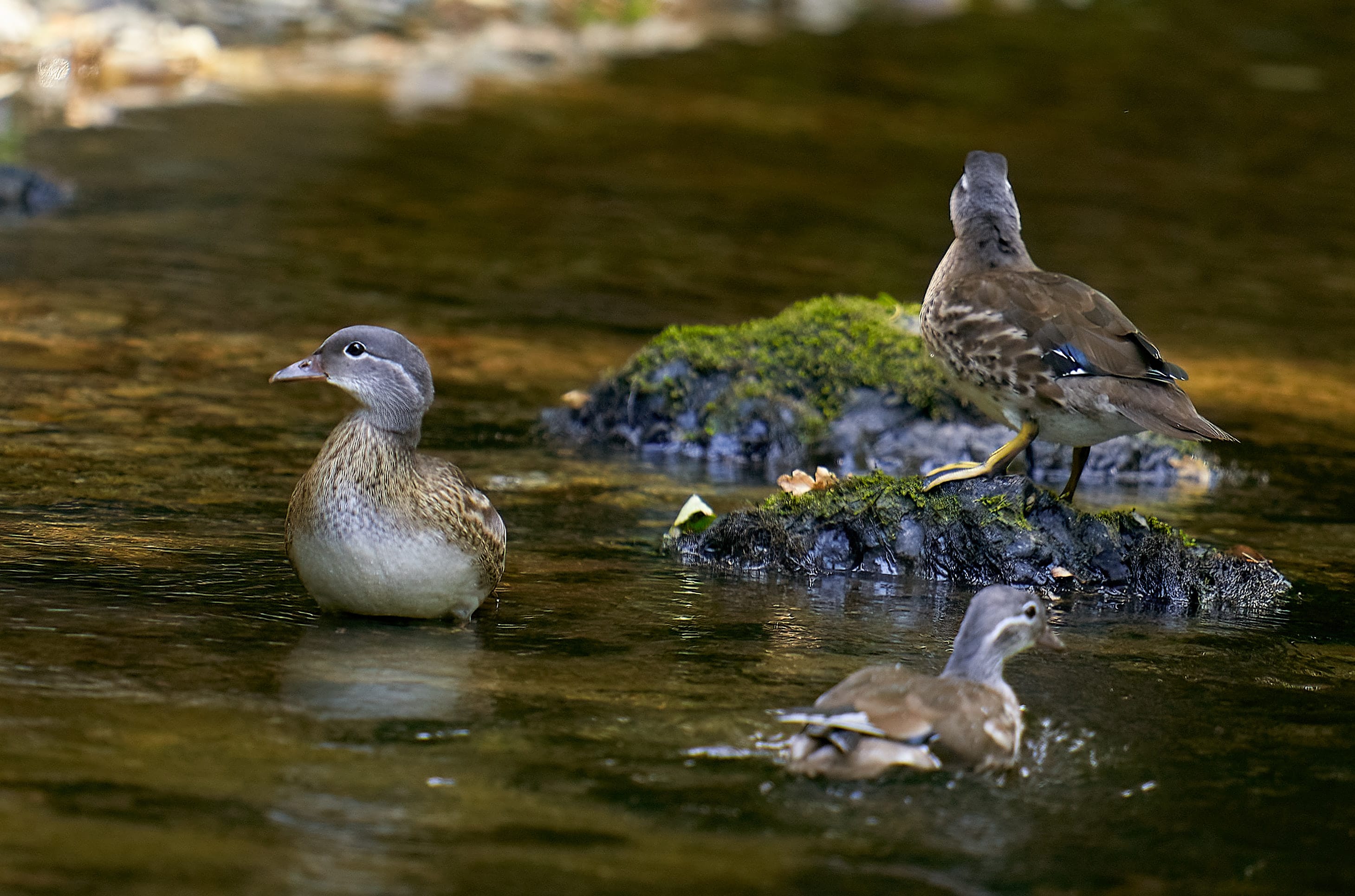 In the shed I experimented with studio lighting with a treasured example of one of daughter Hannah’s early models, and I took an early morning walk out of the village with just a few sheep for company. 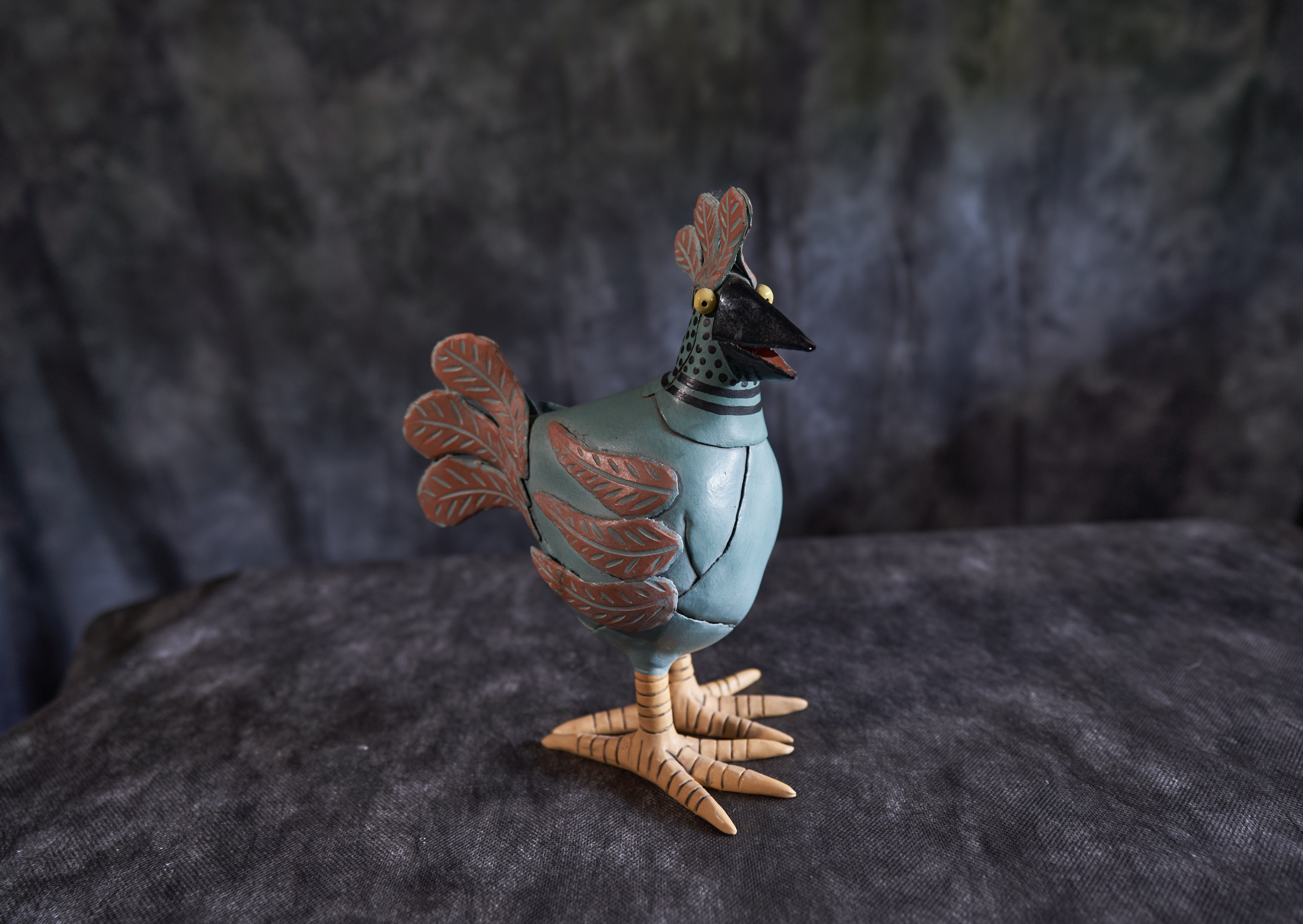 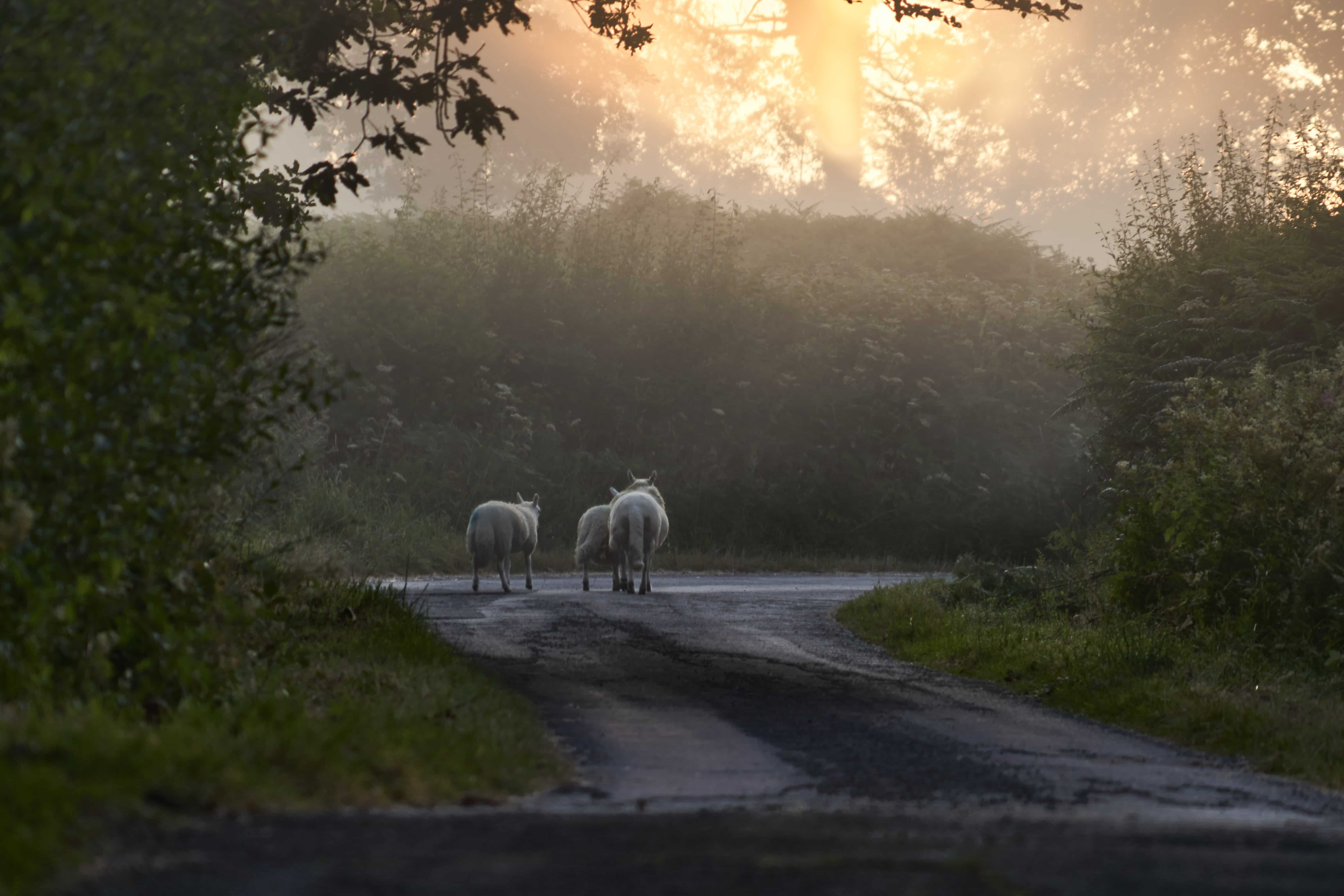 The bird reserves were almost devoid of birds, but right at the end of the month, in grey weather and grey mood I came across this delightful family of Great Crested Grebes. Things began to get better: 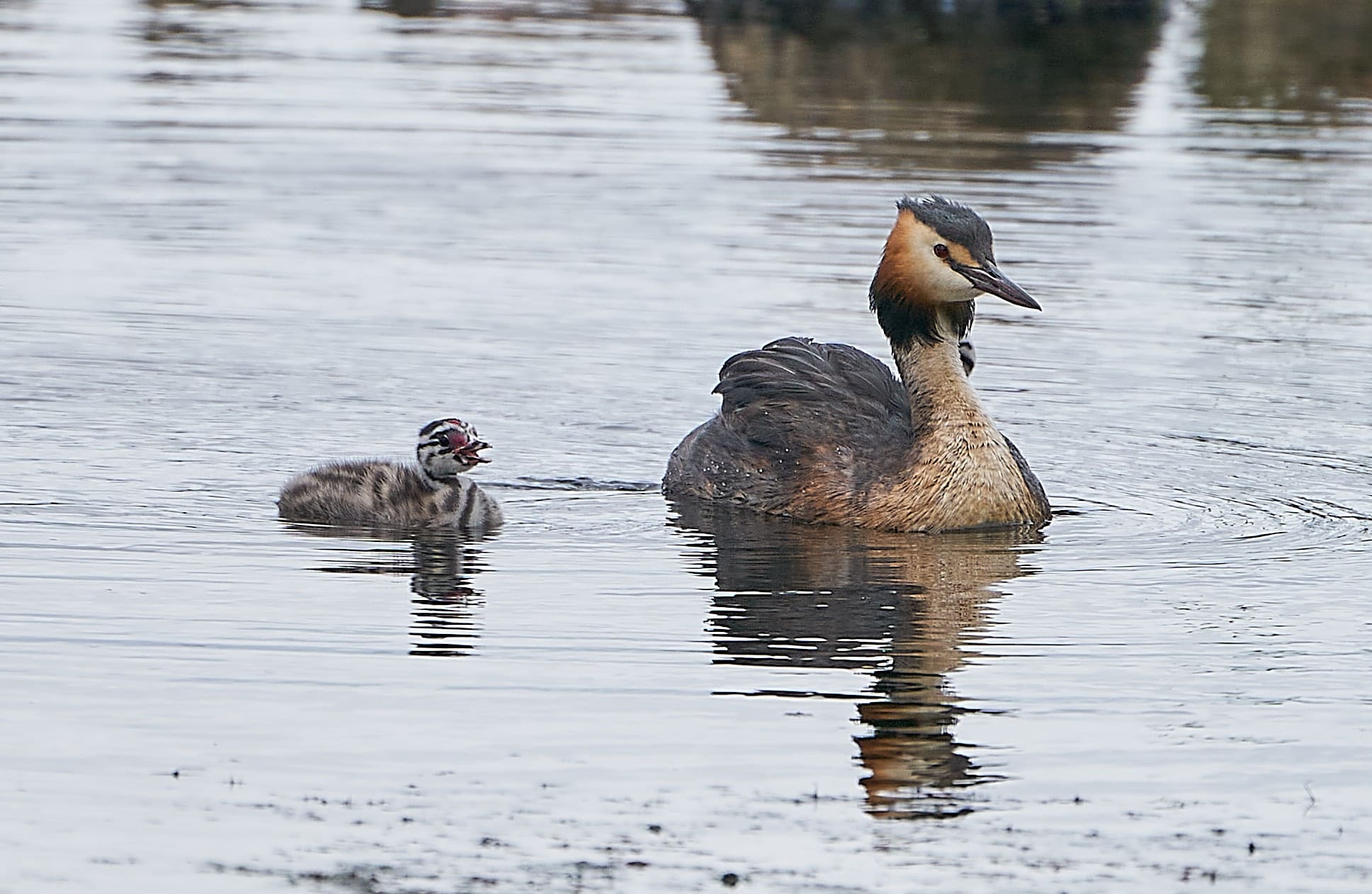 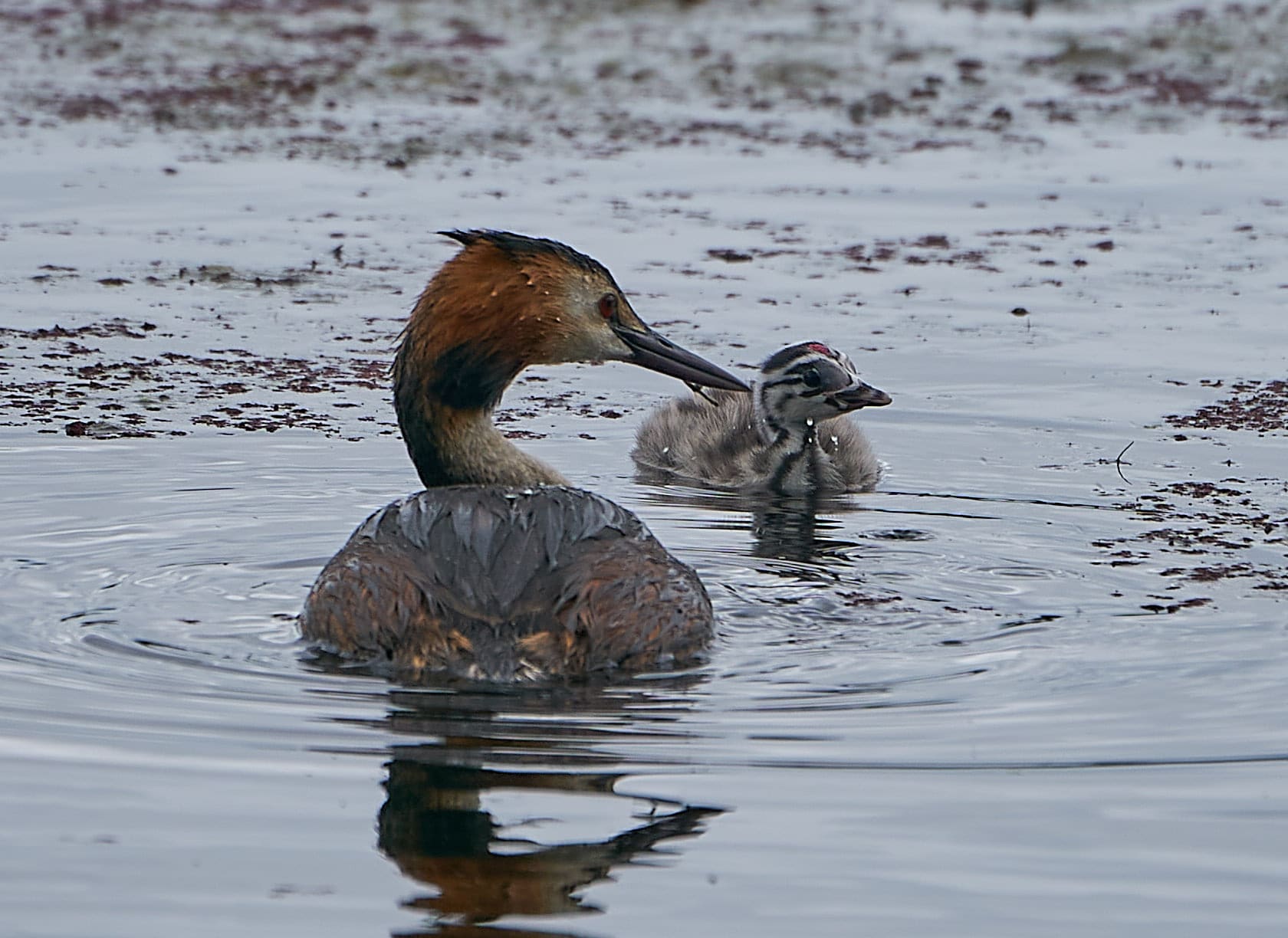 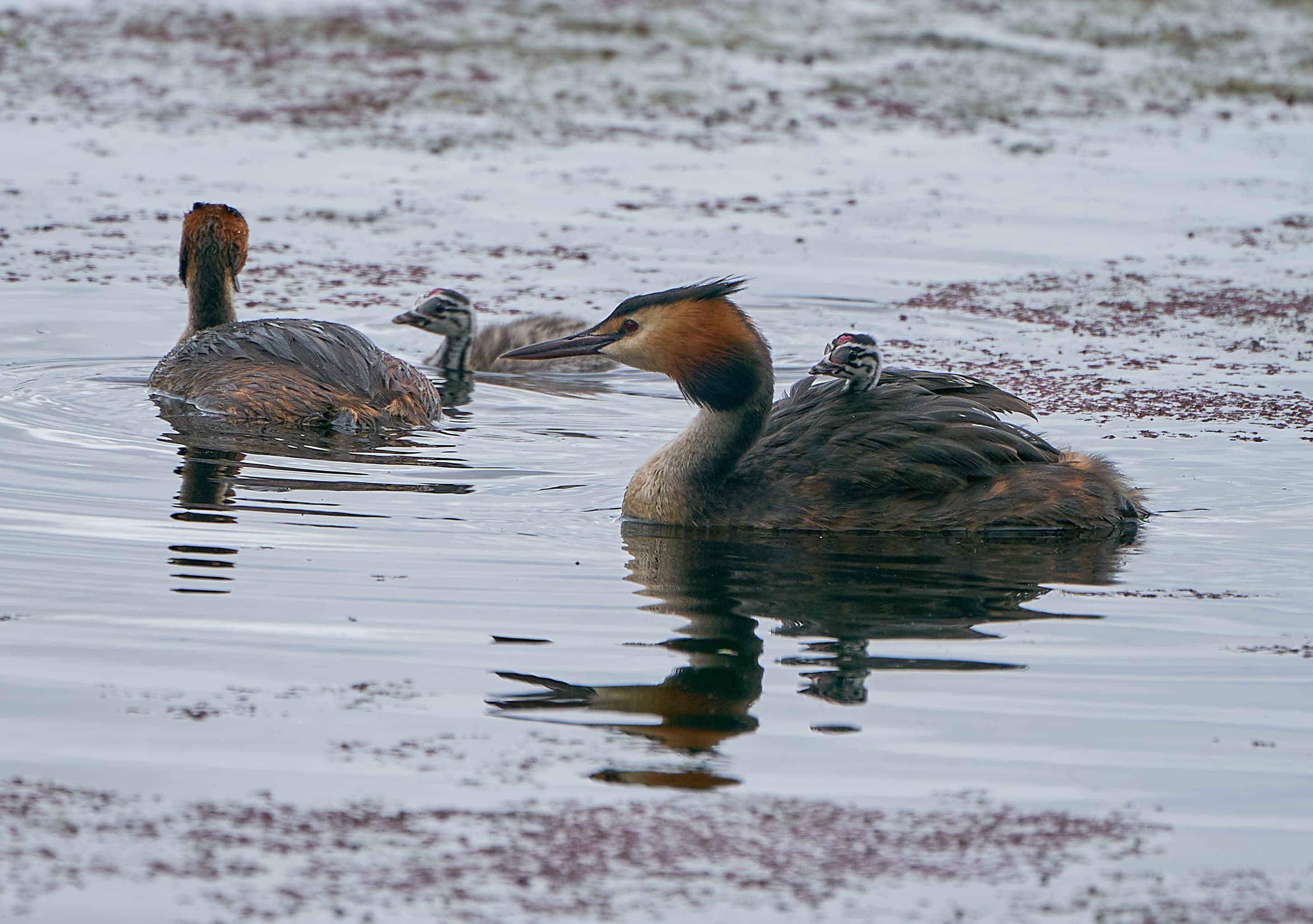 2 Responses to Best of July