Genoa: the noise, the dirt and the splendour

We arrived by train on Sunday, and it took a long time to find a toilet, which then charged us I euro each. How I miss the old French style pissoire: a simple shelter, a modicum of privacy, zero-carbon and free! We then had to find the underground rail line. My guess was the red letter M, but there was no other indication, so eventually we asked someone, who pointed to the red letter M. The ticket machine had an English version, but since the barriers were all open, and nobody seemed to bother with tickets, what we were supposed to do with them remained a mystery.

All this is no criticism of the Italian rail system, but an indication of how much of their world city dwellers take for granted. If you don’t know that the underground is called Metro, you don’t know what the M means. Eventually two weary rustics with luggage which seemed OK at Bristol airport but which was now far too  heavy, emerged into the harbour area – a mass of heavy traffic, bounded on one side by the massive slab sides of cruise ships and on the other by a steep hill covered in high-rise apartment blocks. It was very noisy and very dirty. We had the name of the street, but did not know which way to turn to find it. There’s a map on a bus stop which shows the street, but it’s facing the wrong way and I was too tired to work out how to reverse it, so we ended up going too far in the wrong direction. A kind man came with us all the way back and showed us the right way – just round the corner and uphill. 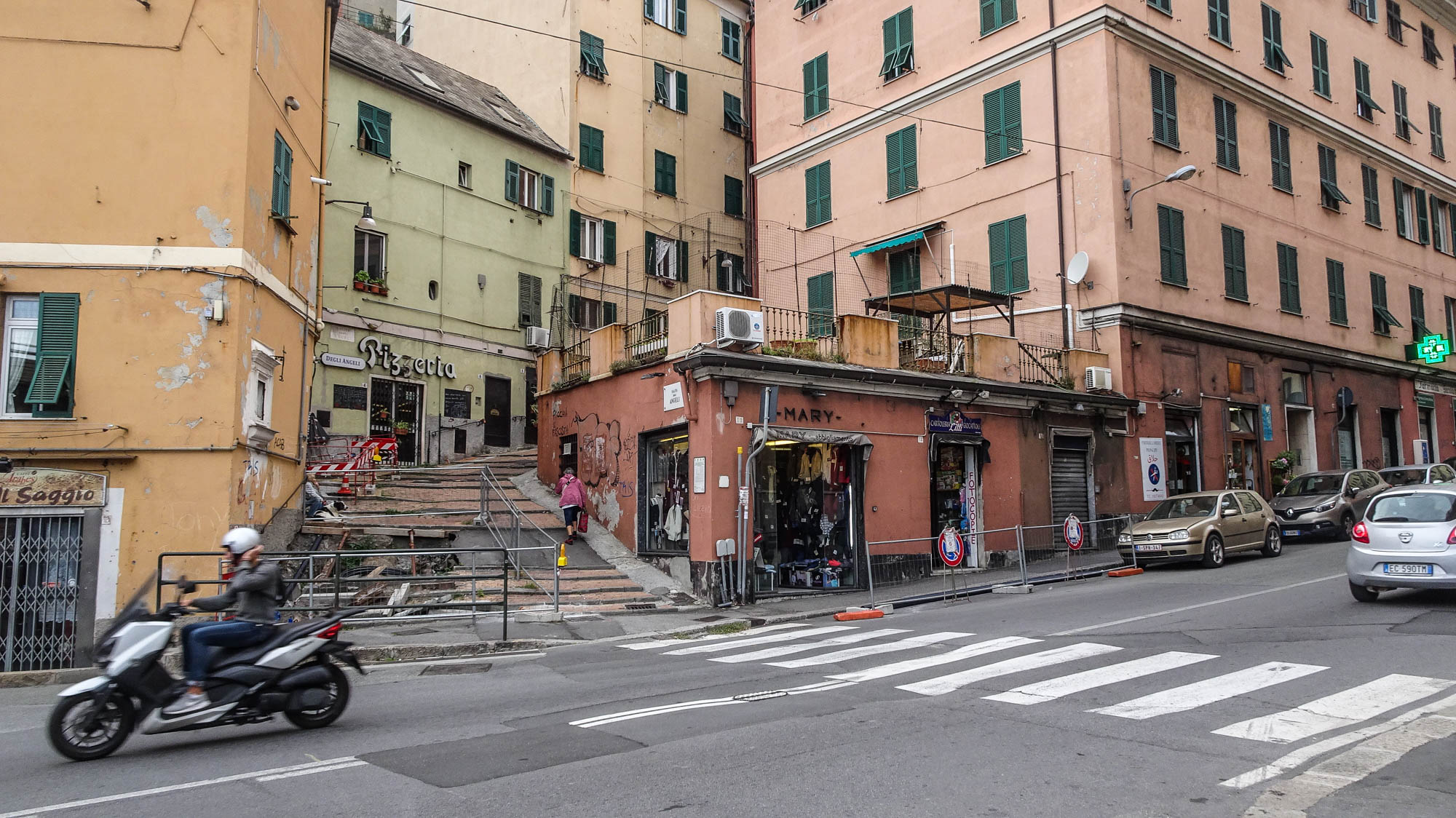 More dogged trudging past piles of discarded furniture  until we see a smiling but anxious looking lady beckoning us into an elegant entrance hall.  She is our Air BnB host, and she shows us into a strikingly modern and expensive looking flat with no discernible daylight. The table is crowded with decorations – candles, place settings, baskets, ornaments and best of all, two cake stands with delicious looking cakes.

There is actually an outside space – a little yard bounded by a sheer rock face and a tiny patch of sky five stories up. The yard has chairs and a table; even a parasol, so we worked out that it must get an hour or two of sun in the middle of the day, and in the hot days of summer might be quite pleasant.

When Thelma found the flat online, the idea of being by the harbour conjured up visions of Bristol Harbour, but Avonmouth would have been a better example. There are two major roads between us and the ships – one on stilts on top of the other. Then comes the huge ferry terminal with ferries going to places as remote sounding as Tangiers. Beyond that is the container port, all of which has its own magic in the early morning. 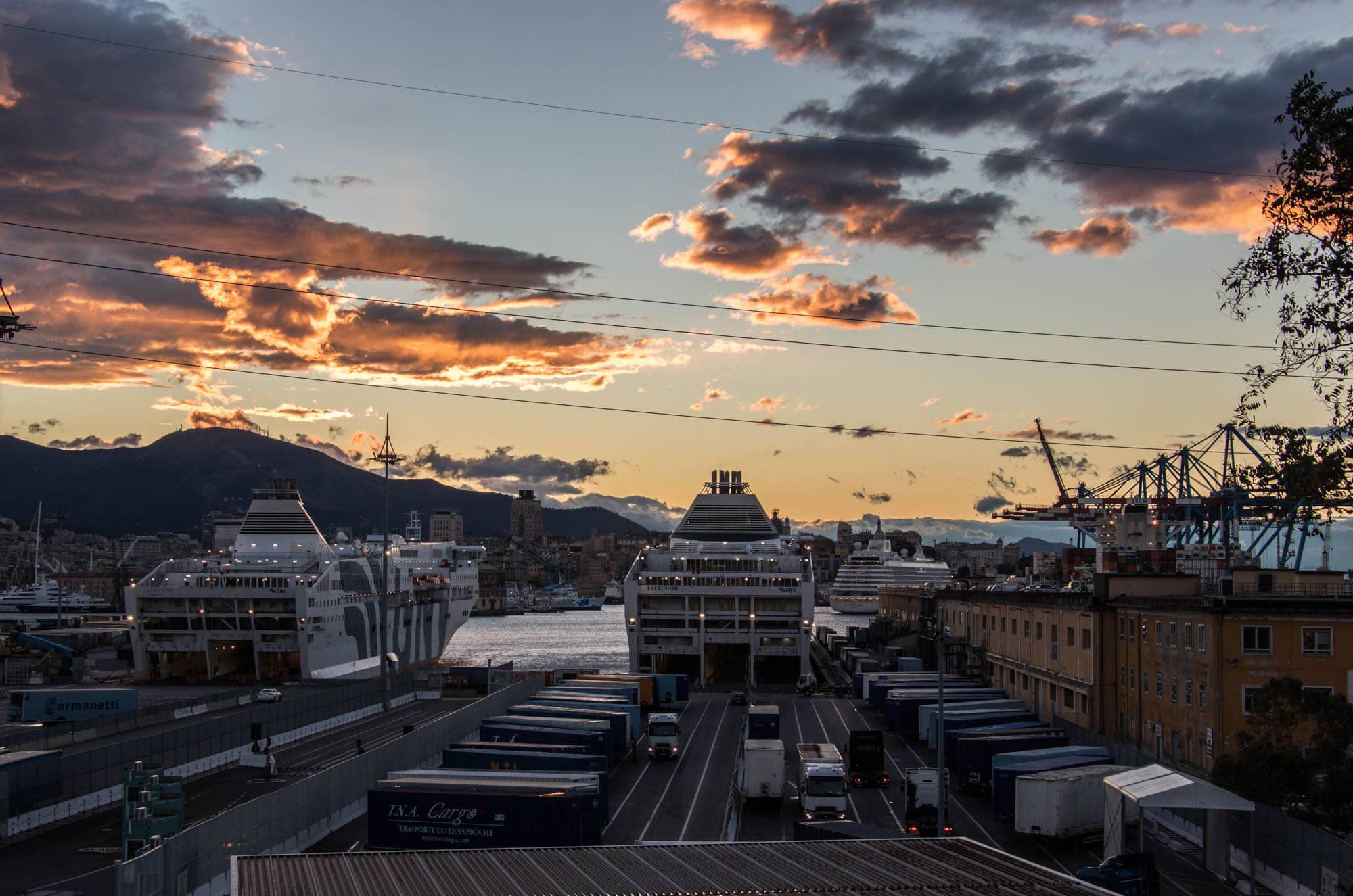 Genoa: noisy and dirty, population 580,000, is an industrial city, in contrast to Florence: noisy and clean, population 382,000. Genoa also claims the largest old city centre in Europe, a maze of little alleys and squares. The centre is only two stops on the Metro, and we step up into the old harbour with its film-set galleon. 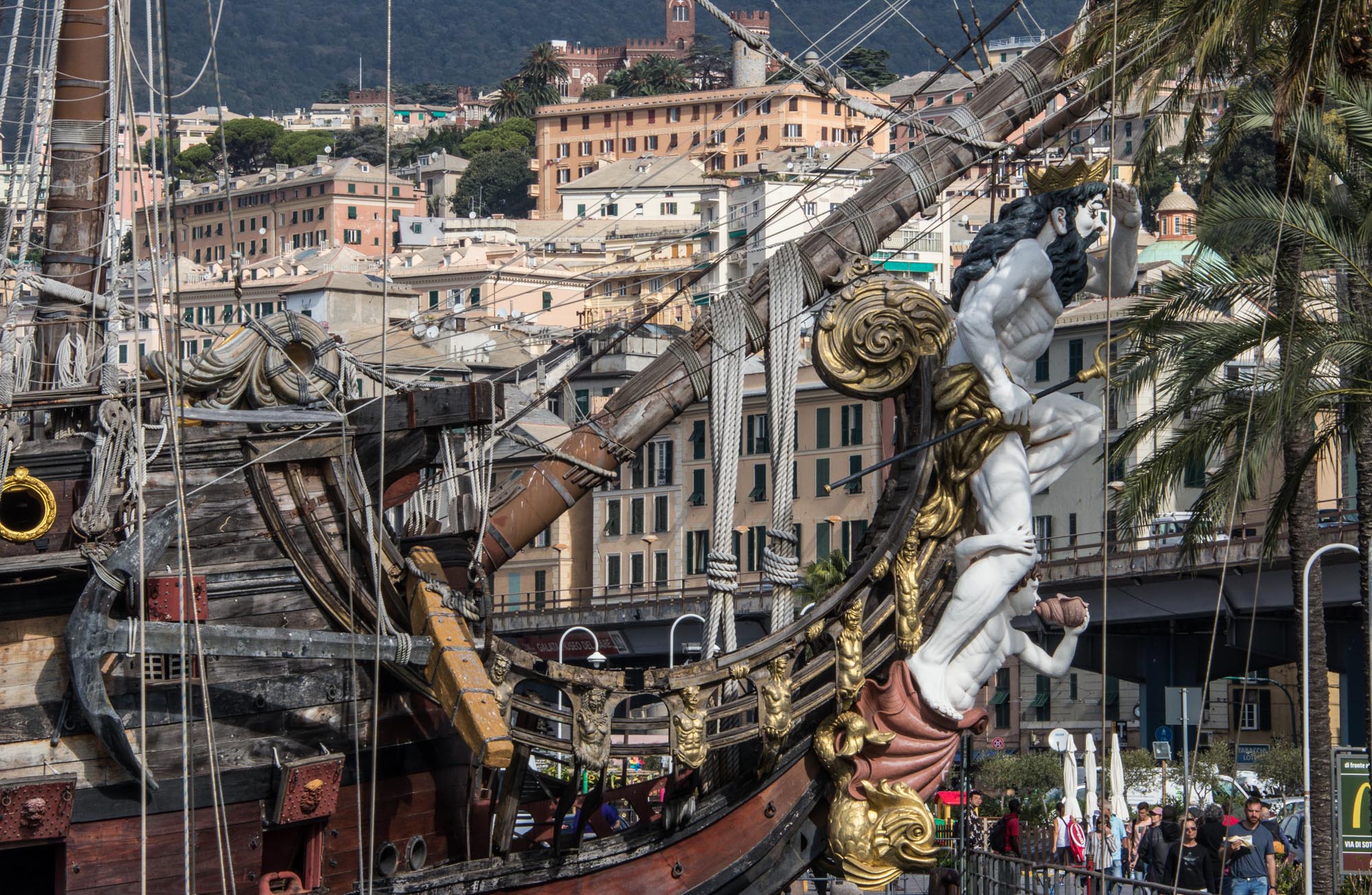 Heading inland, we soon find ourselves entangled in an area very different from  the equivalent in Florence. Here we are a minority: the alleys are alive with a very urban population speaking, as the TV subtitles insultingly say “own language”, in this case Italian. 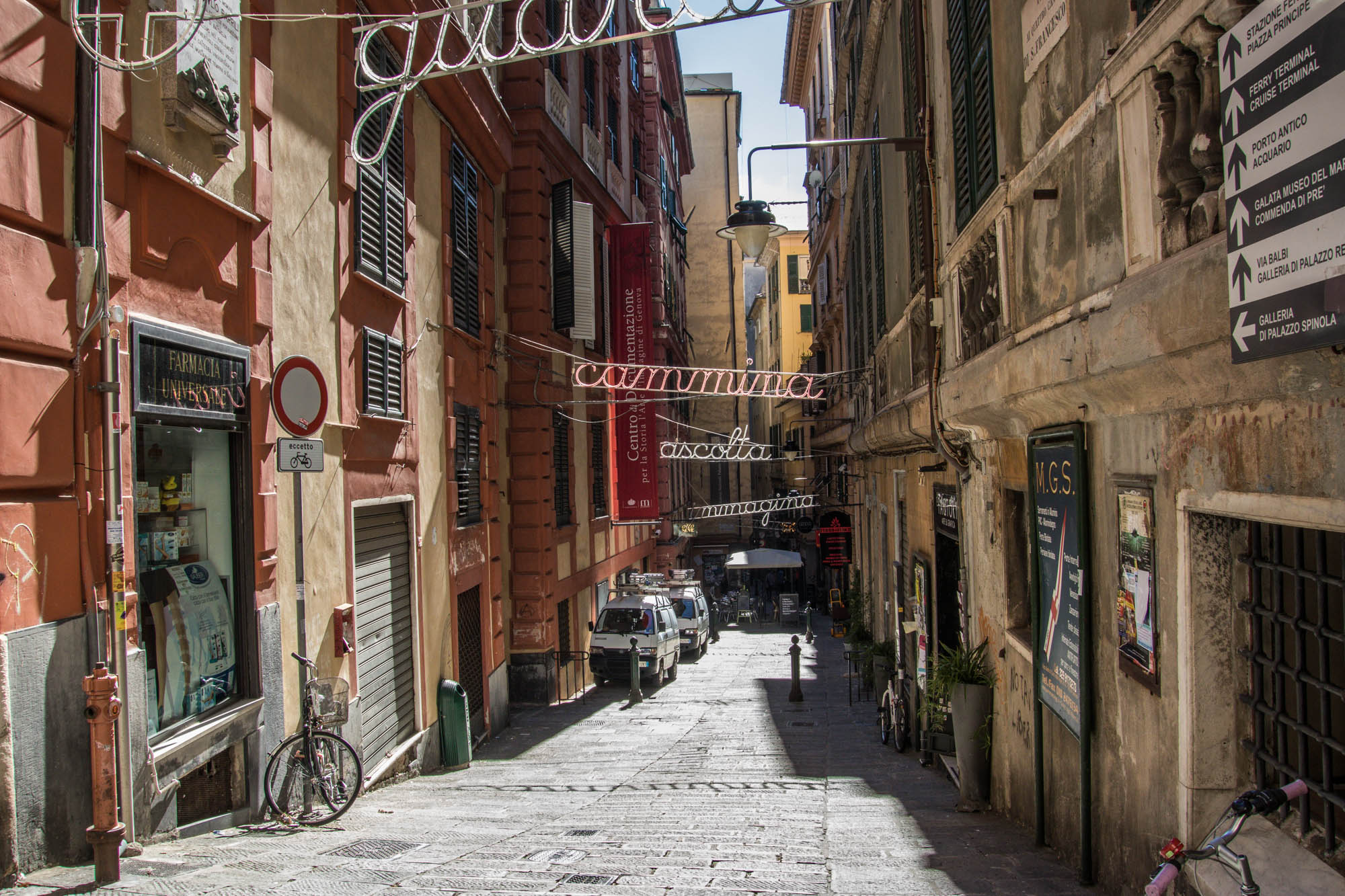 As you go deeper into the maze you come across young ladies with provocative clothing standing on the corners and eyeing the men. Did I instinctively move closer to Thelma? It is at the same time a rough area and a palatial one. Every little square has its palace and the Via Garibaldi is nothing but palaces. It seems the 16th C Genovese merchants vied with each other to build accommodation suitable for inclusion on a sort of Renaissance Trip Advisor, the “Palazzi dei Rolli”: 160 of them, all grand enough to host a state visit. Some of these palaces are now banks, some house city institutions, some are still privately owned. Most have sumptuous courtyards, wonderful frescos, columns, statues, putti, and stucco, but the only way to admire the roof line is to be in the fifth floor of the palace opposite. You can imagine these  obscenely wealthy merchants glowering at each other from across the narrow street. 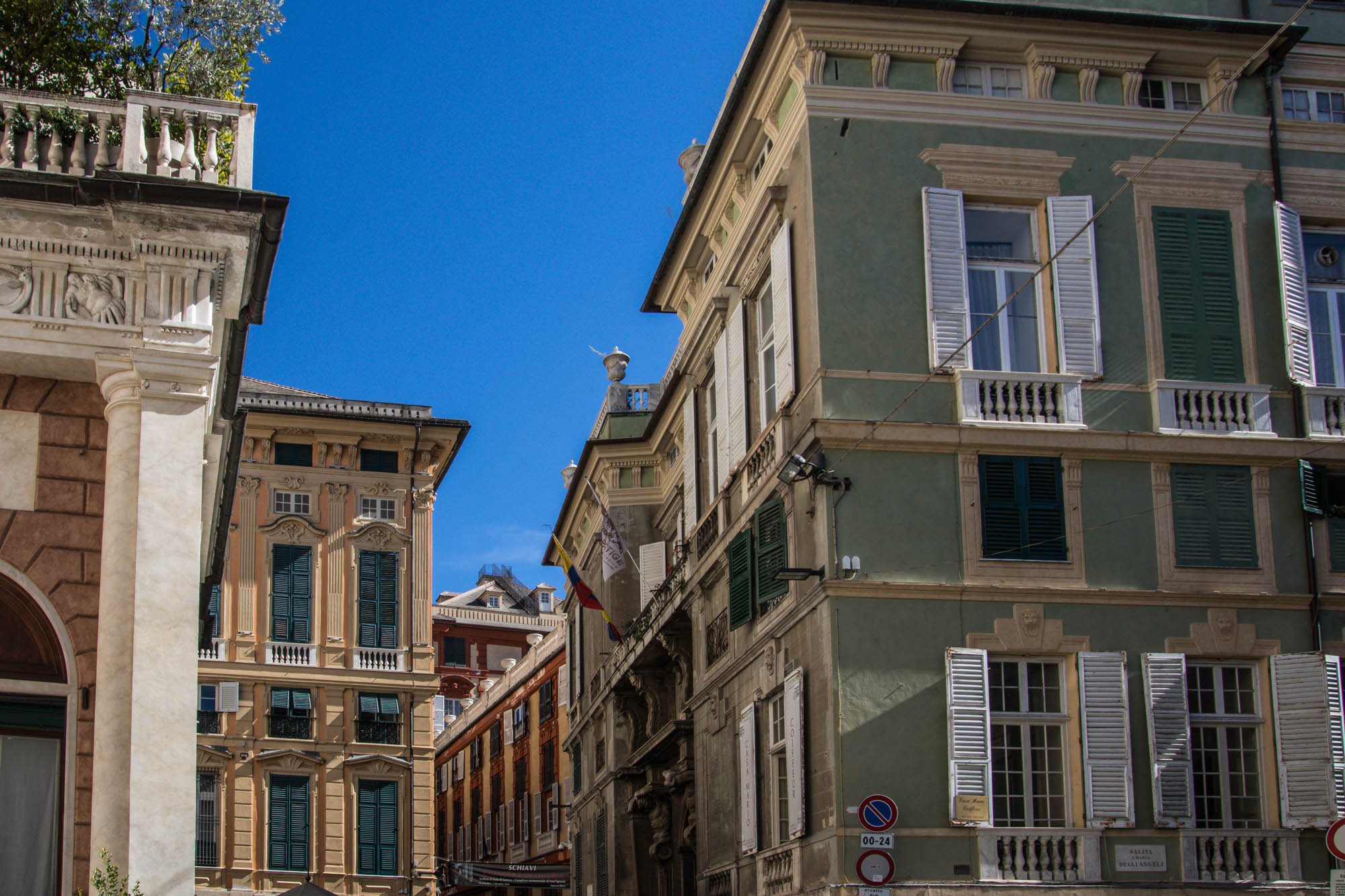 This is a city where the buskers sing arias and look like this: 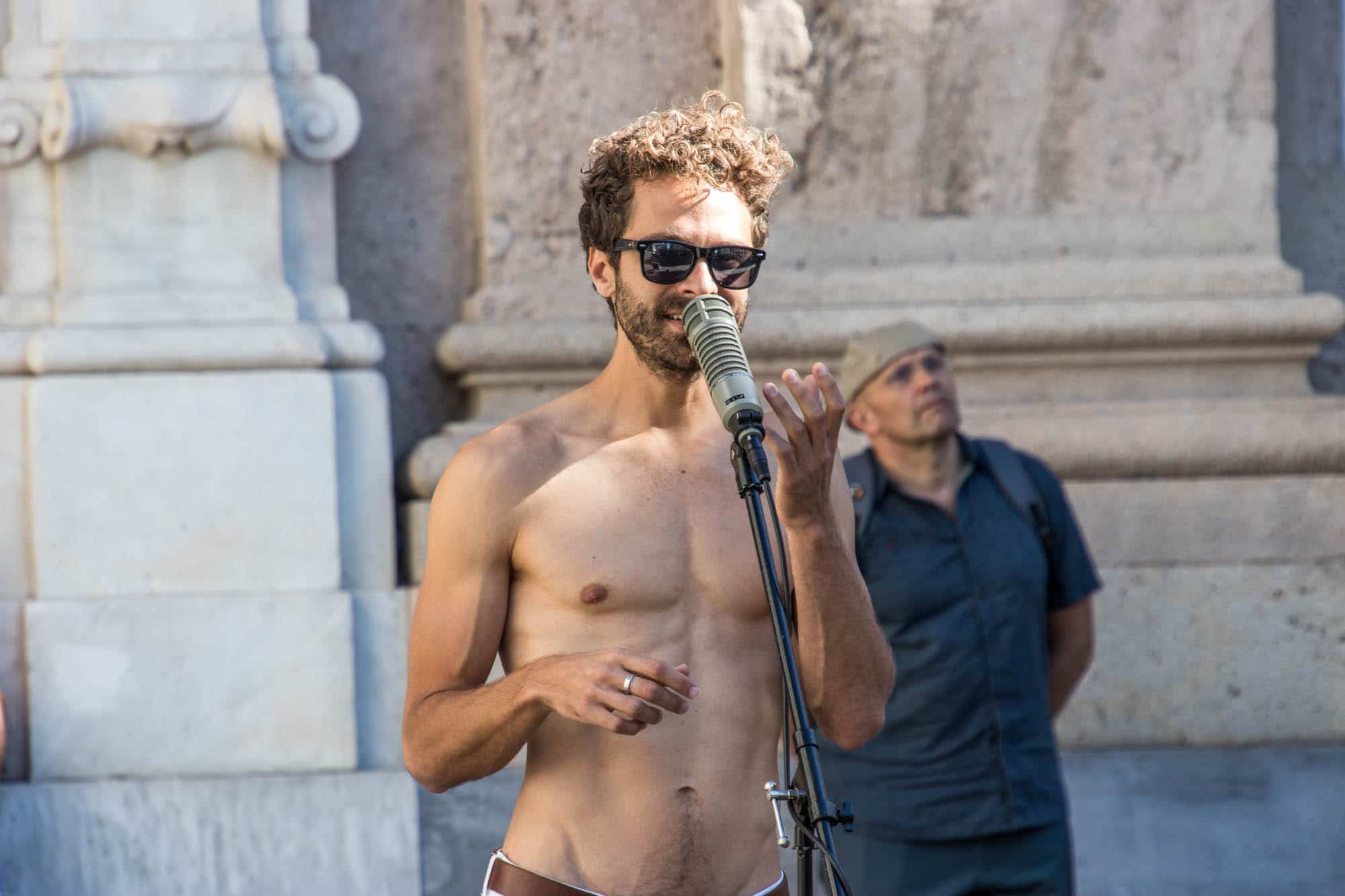 We spent two glorious sunny days out of the city. First a ride in the longest of the 5 funicular railways which are part of the metropolitan transport system: 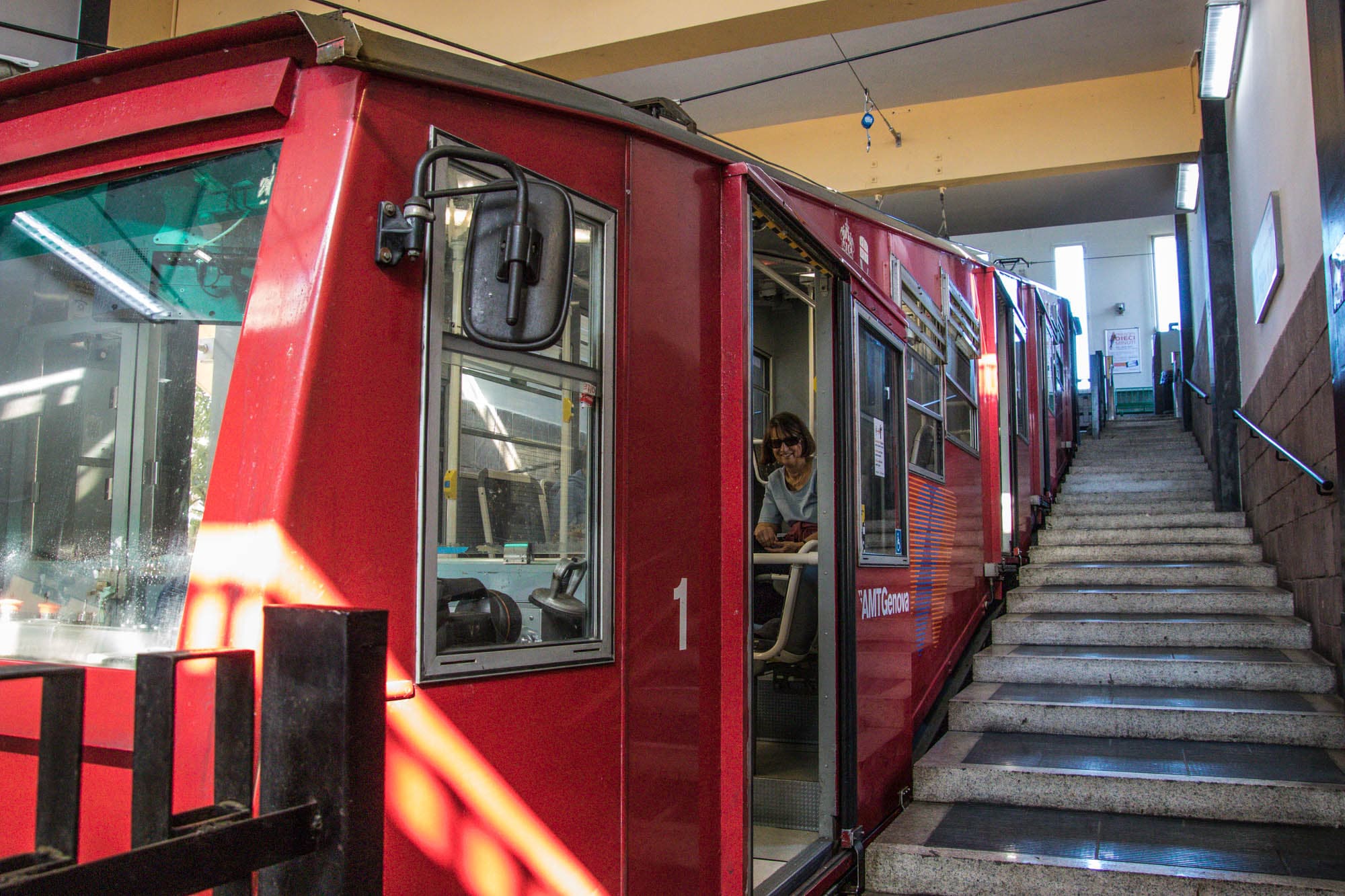 It takes us to a quiet road which follows the line of the astonishingly extensive outer city walls, up to a hilltop fortress, now ruined.  Here I am overjoyed to catch, after many attempts, a decent picture of a European Hornet: 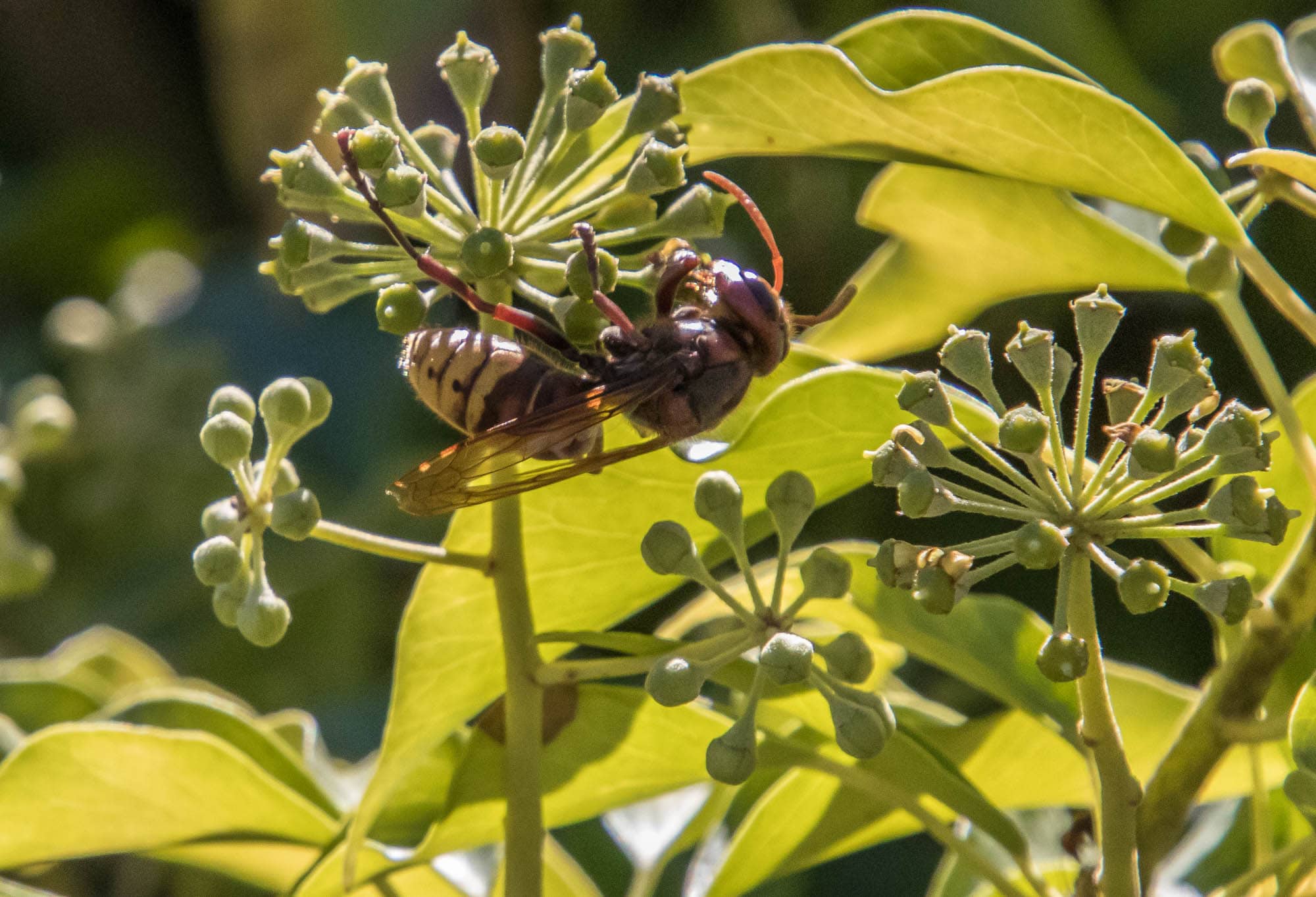 On another day we went to the glorious little resort town of Portofino: 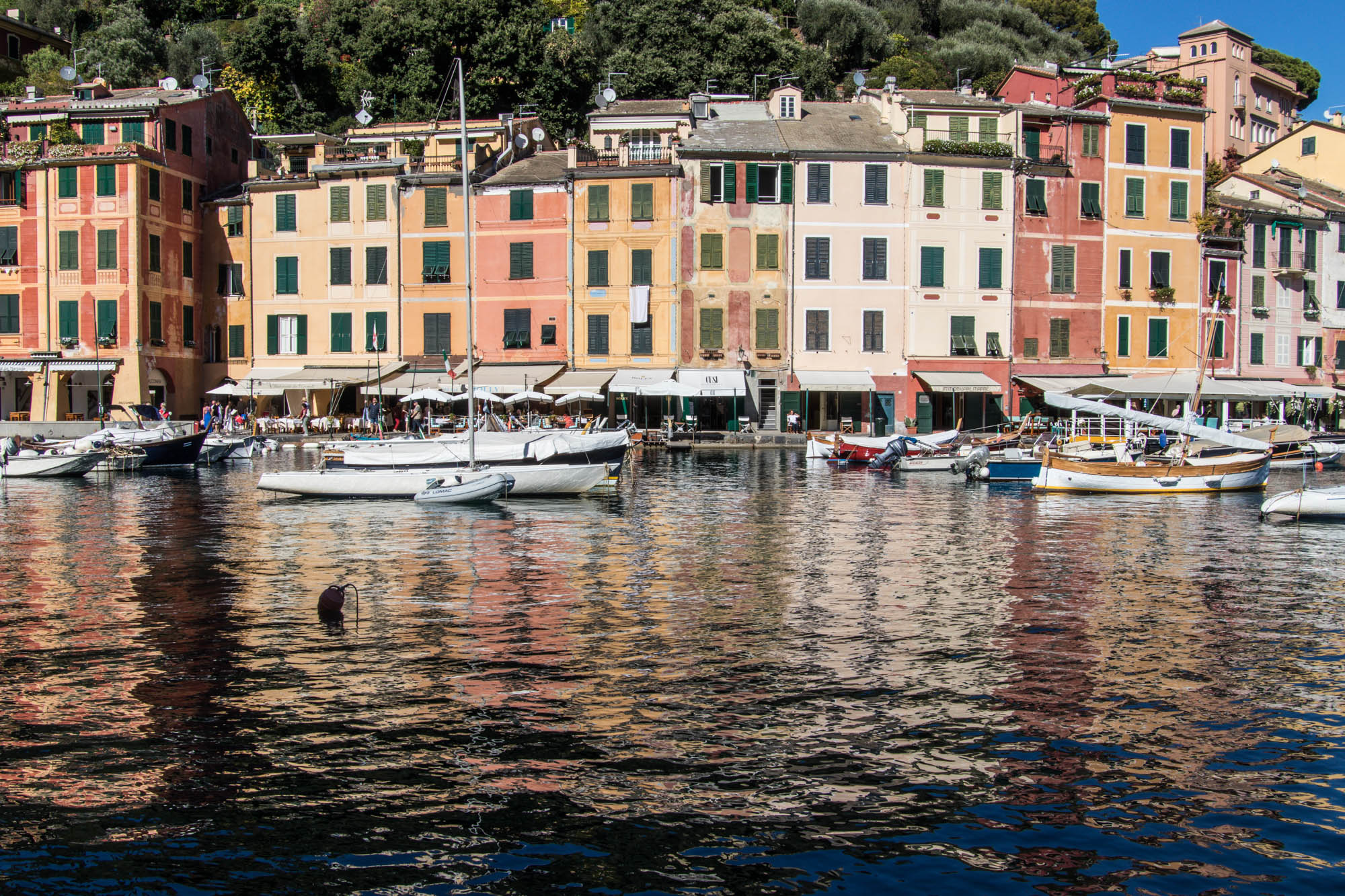 where we had the most expensive lunch imaginable in a perfect setting. 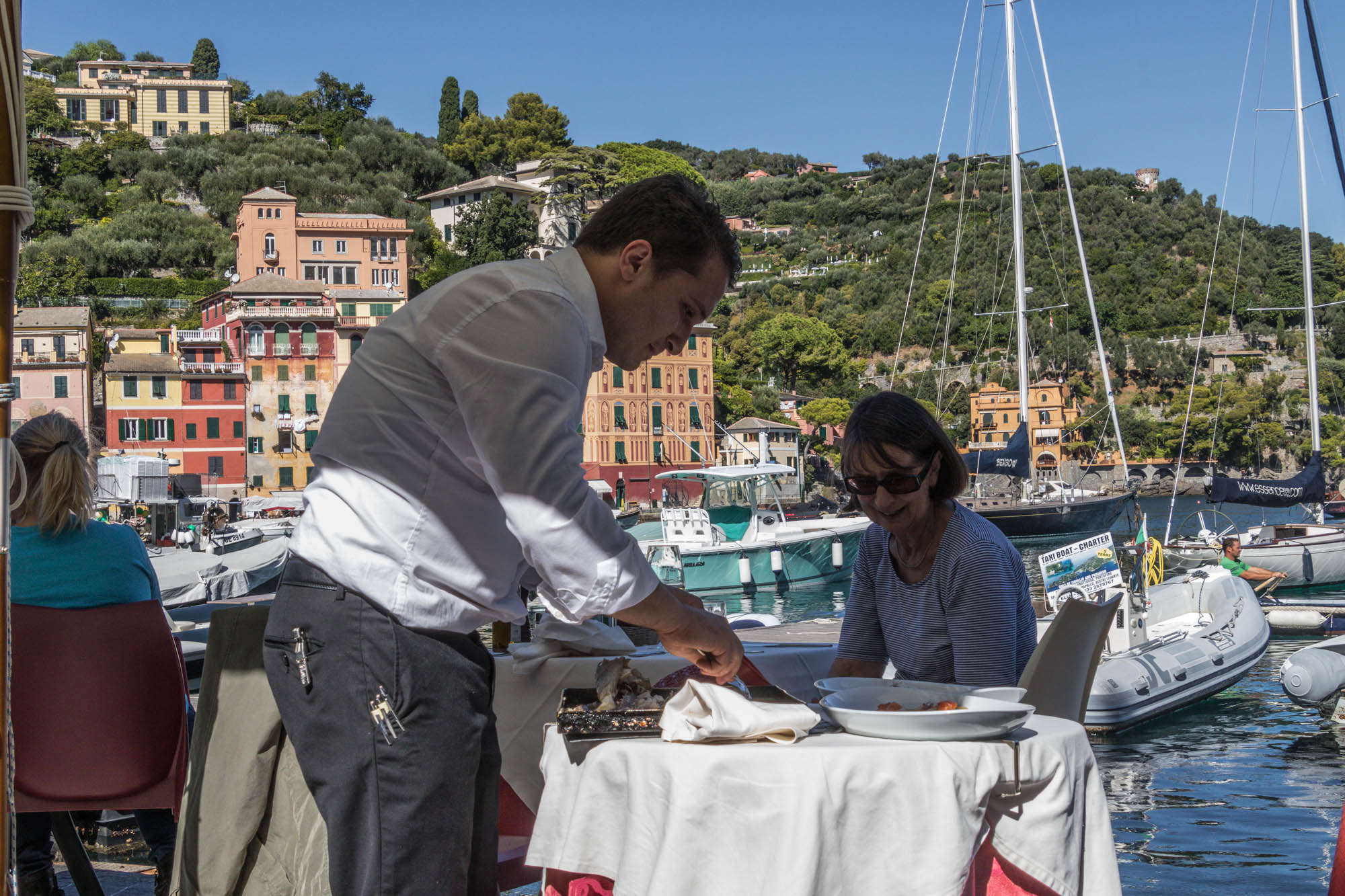 Three of the Rolli Palaces are open to the public and on our last day we spent several exhausting hours examining a series of huge and grandiose paintings. They chart the cultural trends of the late 15th to late 17th centuries, and the “revolutions” in style which marked each phase. 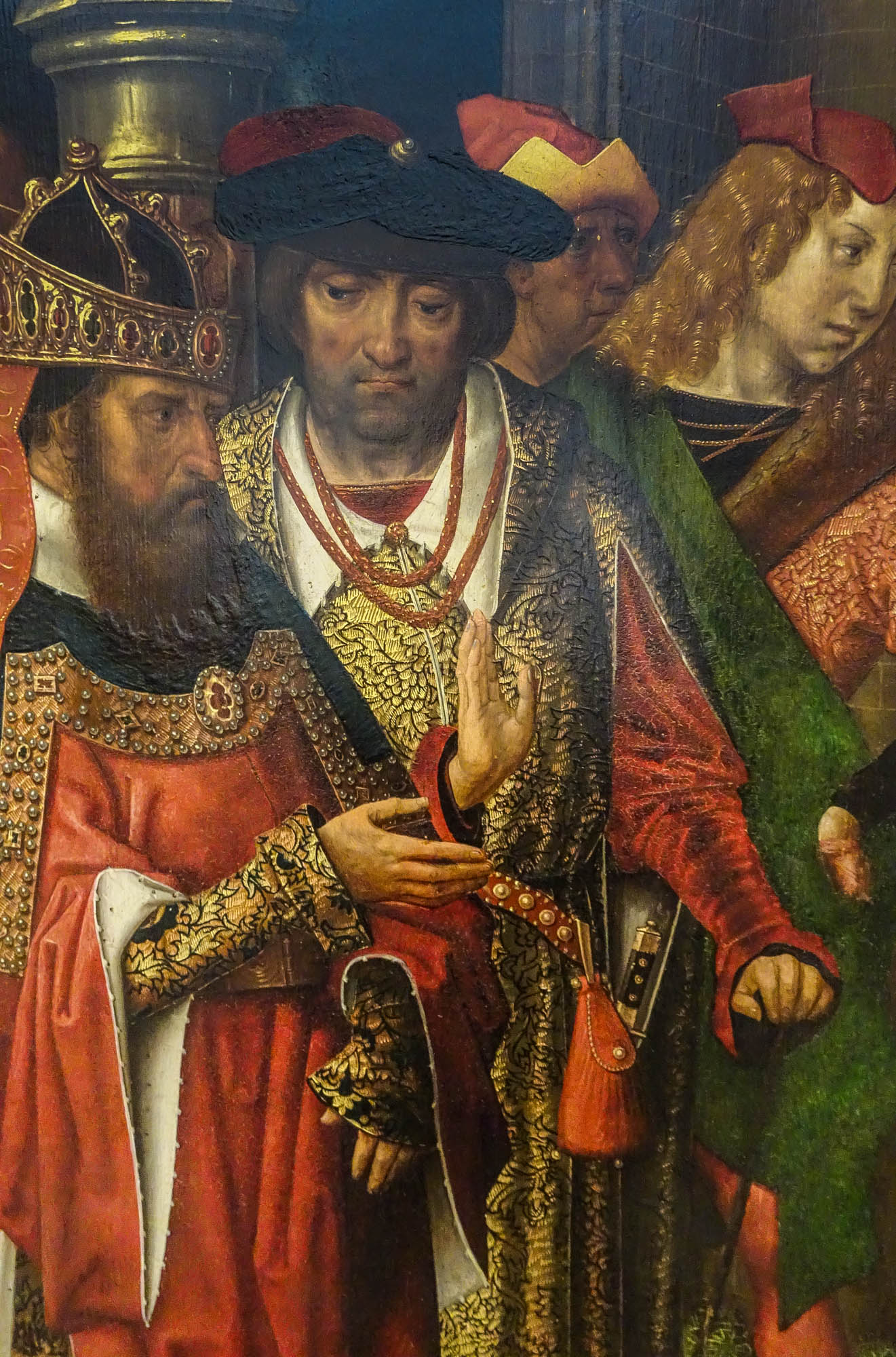 In the middle was a strong Flemish influence which brought a greater degree of realism and more detail, but that gave way to Baroque and then Rococco, both styles characterised by the same writhing half-naked bodies, the surfeit of cherubs, the same old biblical and classical themes that we saw in the earlier rooms and saw far too much of in Florence. I give up.

Exhausted, we indulged in coffee and cake therapy and then set off to walk through what turned out to be the African quarter, peopled by tall, elegant  young men looking poor but stylish, and some women in flamboyant African robes. It was a fascinating way to spend our last afternoon in Genoa. 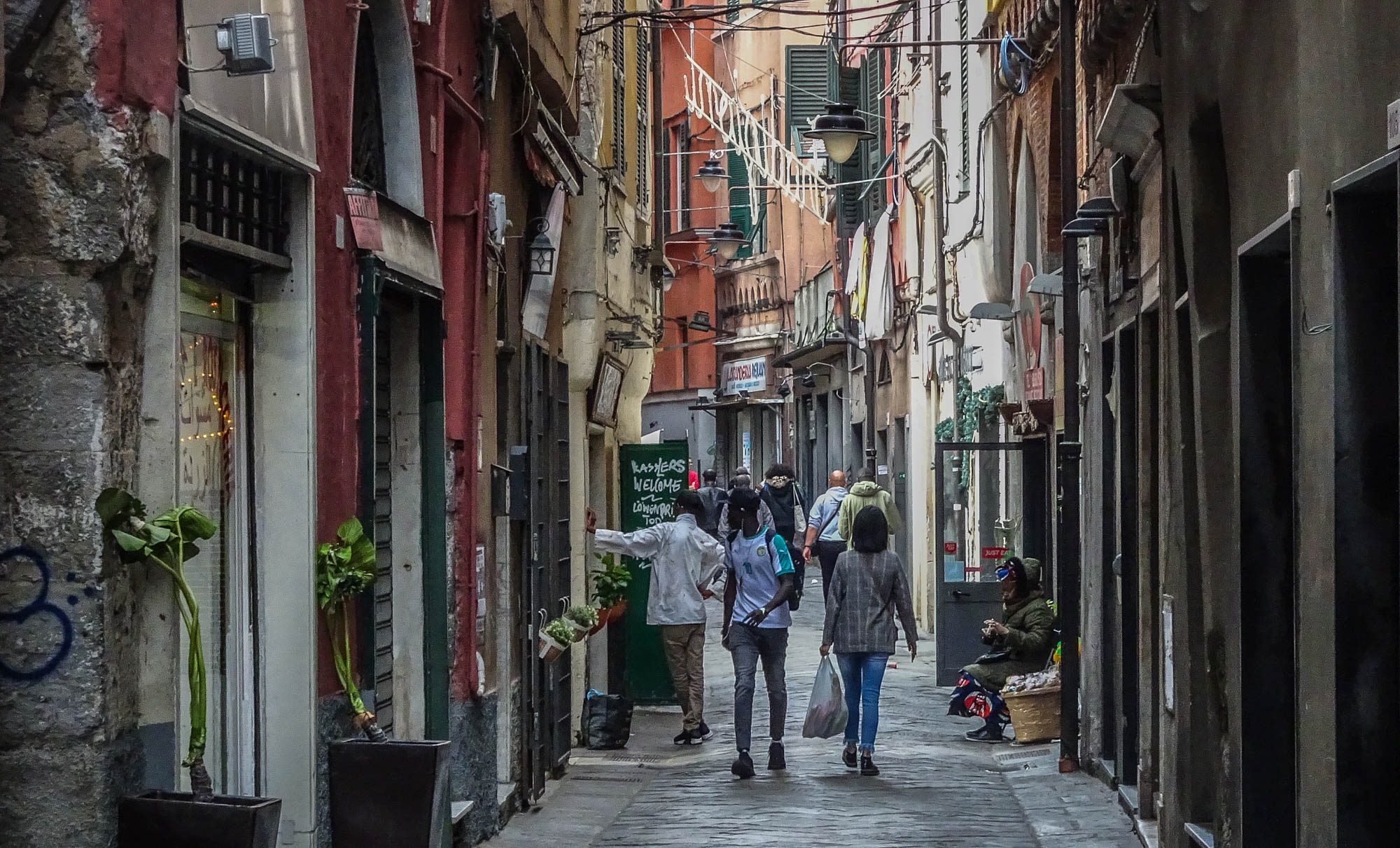 Final verdict: a place of extremes: great beauty and dirty streets, a place where vast wealth rubs shoulders with real poverty in a densely packed living space –  and has done for a good 600 years.

This entry was posted in Travel. Bookmark the permalink.

8 Responses to Genoa: the noise, the dirt and the splendour