I would like to offer my neighbour a drink, but I don’t think Curlews are allowed alcohol. 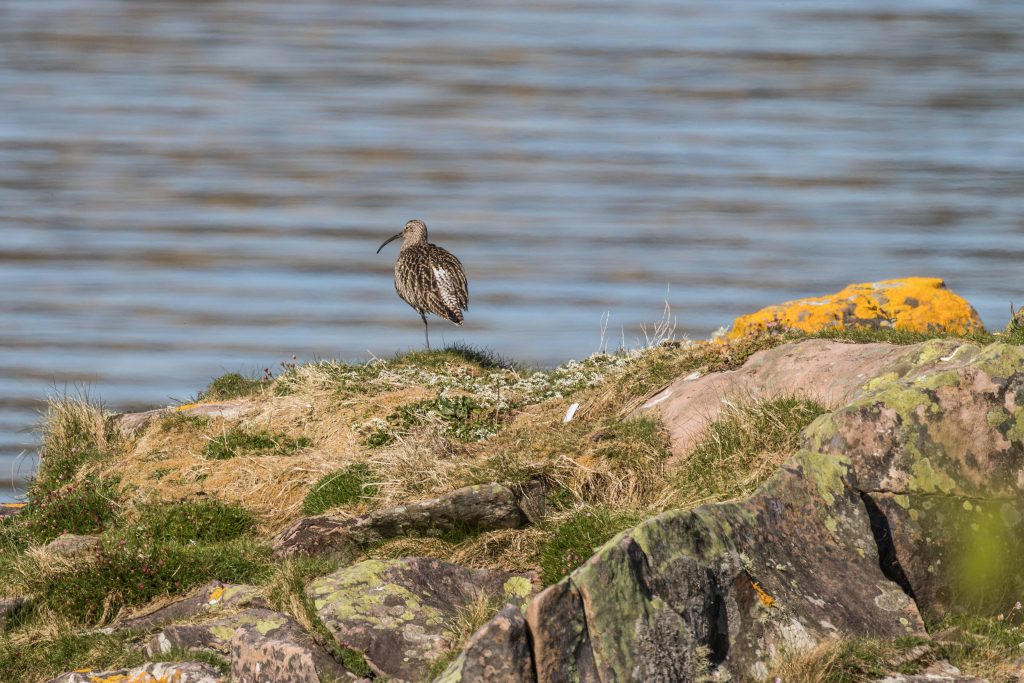 I’m recovering after what I think was the hardest day’s walking I’ve ever done. I set off at 8:00 up a very rough track leading to a place called Dibidil on the  south-east coast. I decided to carry the big lens in the rucksack, and have the Tamron multi-purpose lens on the harness with the binoculars.  The hope was that if I came across any eagles I would have time to make the switch. I also decided that in case it rained I’d better take the rain coat, leggings, and rain cover for the rucksack. None of these are heavy, so that’s OK. Then in case I found the perfect spot to watch eagles, I’d better pack the bag hide too. That’s not heavy either. The phone of course is essential, plus spare camera battery, hand warmer, spare phone battery . . . have I forgotten anything?  The pack is seriously heavy, but I can do it.

This is a path with a game plan. Its sole purpose is to put you to the test: can you tramp through bog after bog without the bog ending up inside your boots? Can you skip from rock to rock across fast flowing mountain streams? Can you find the best way round all these hazards and find the path again? It’s only 8.5 kilometers to Dibidil. That’s only a little over 5 miles.  Normal walking speed is 4 miles per hour, so I should be there and back by lunch time, but in case I  do find some birds to watch I also packed some lunch and a small bottle of water, neither of which weigh very much. 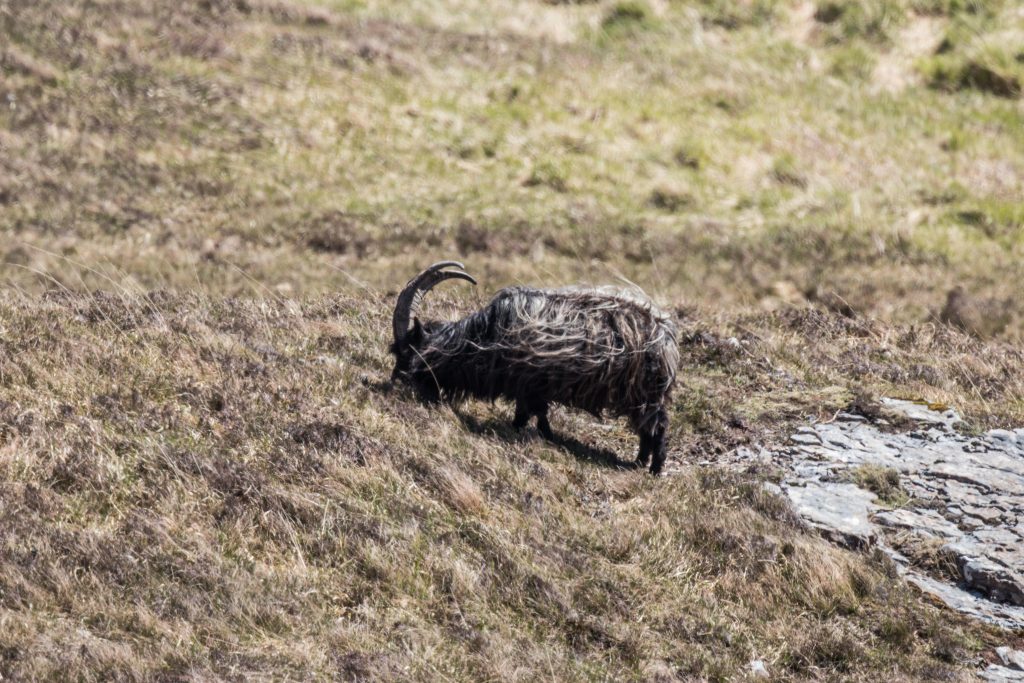 I stopped to catch a pair of wild mountain goats – animals for whom the word shaggy must have been invented. A little further on was a small green island. I had read about the “Shearwater Greens” here – places where the Manx Shearwaters have been nesting for year after year and changed the soil with their droppings. The Shearwaters only come out at night to avoid predation, but there were two birds I’ve been trying to find for ages – Shags: clearly identified from Cormorants by the crest. I ponder a joke along the lines of “I got a shag” but reject it. 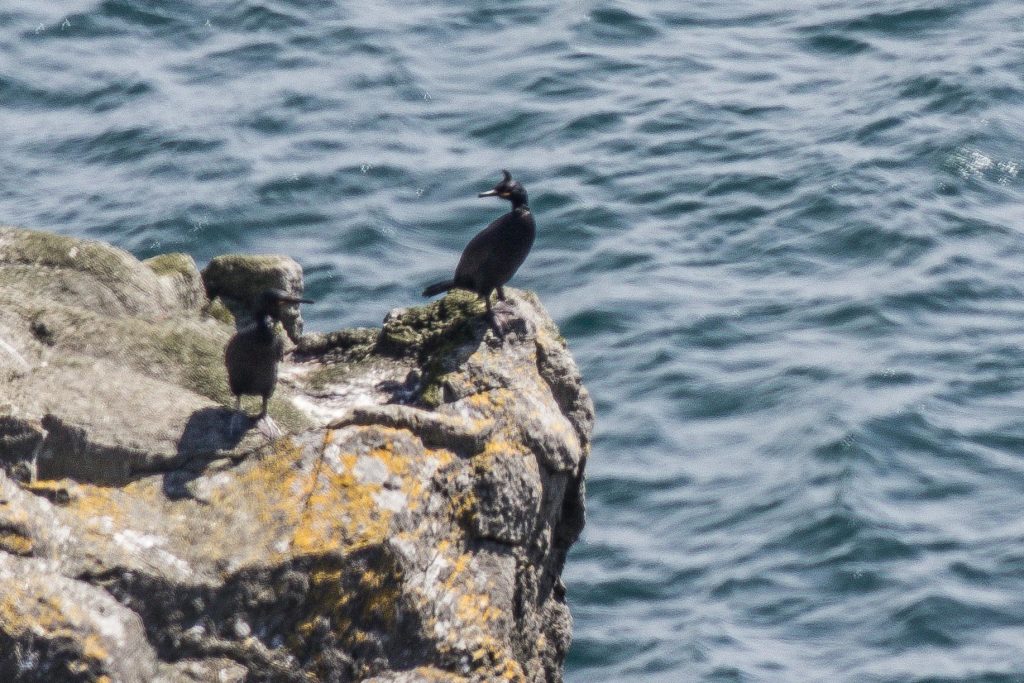 The eagle was just a shape, brown against the black rock. The shape evaporated. But something was upsetting the white birds nesting on the cliff face a mile away. Fulmars?  Kittiwakes? Must ask someone. They poured out from the cliff and spread out over the sea, swarming out and back, and then the eagle is there, white neck clear against the huge dark wings. From the first glance I know it’s a Sea Eagle. It flies behind the cliff. I wait, camera pressed to my eye, the weight of the lens hard on my arms and neck. It returns and it’s flying towards me across the brown grass and heather, but it turns again and goes back to scare the white birds, and a hoodie tries to chase it off. I know without looking at the results that it’s too far for any decent shots, but I still look at them, and it’s still too far. 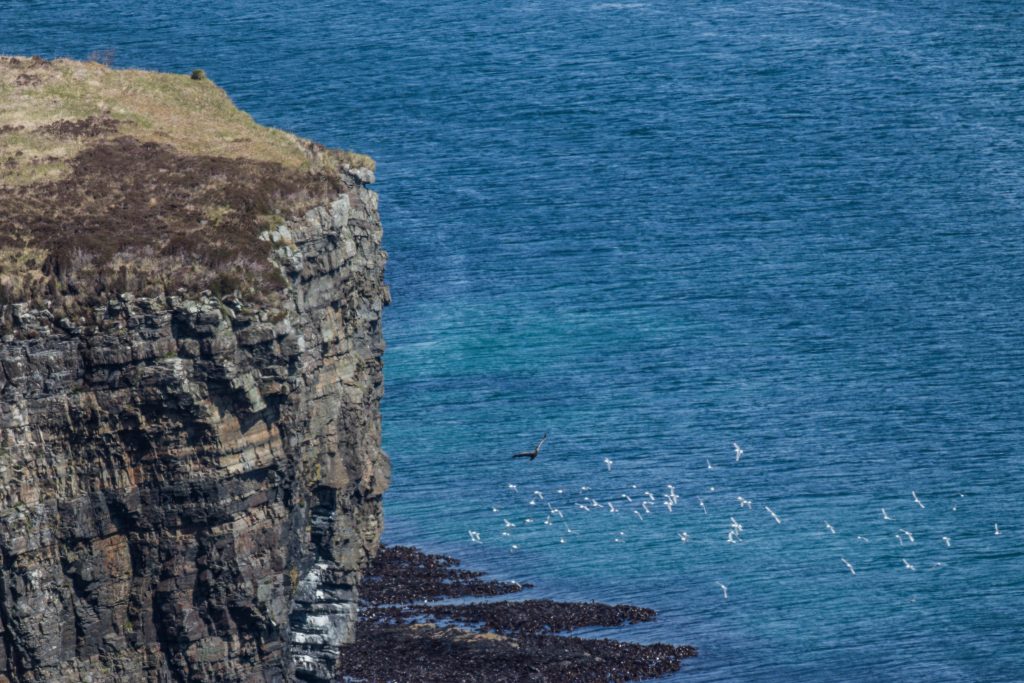 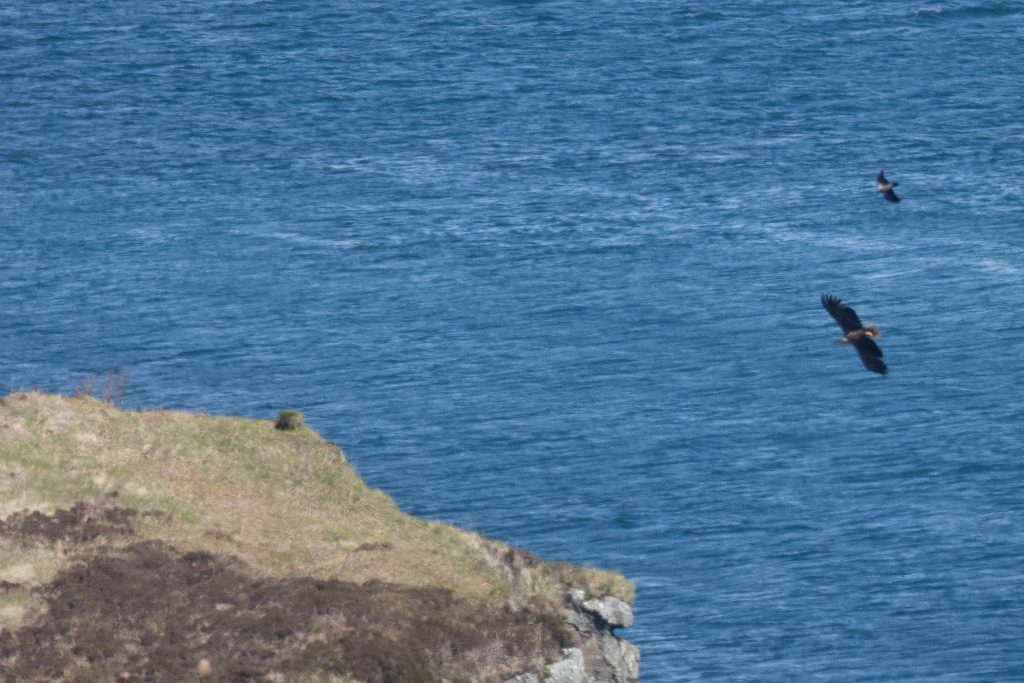 Could I get back here in the morning and get much closer? The ferry goes at 4:15. If I set off at 7 I should be OK, but there’s a bigger problem than mere exhaustion: the deer fence. This whole stretch of coast has been fenced off, presumably to allow the trees and shrubs to regenerate. I look for places where I might get over or through it. I do have the right to roam, and would only be committing an offence if the eagle is nesting there. They generally prefer trees, but it’s possible. It would take 2 hours to get there. If what I saw was a casual visit by a wandering White Tail, I could wait for hours, find out what the white birds are but miss the ferry. Not a good idea.

On the brutal track I could only average about 2 mph, and got back at 17:00. Nine hours on the hill, and at least 7 walking. My shoulders and hips still ache but I’m OK 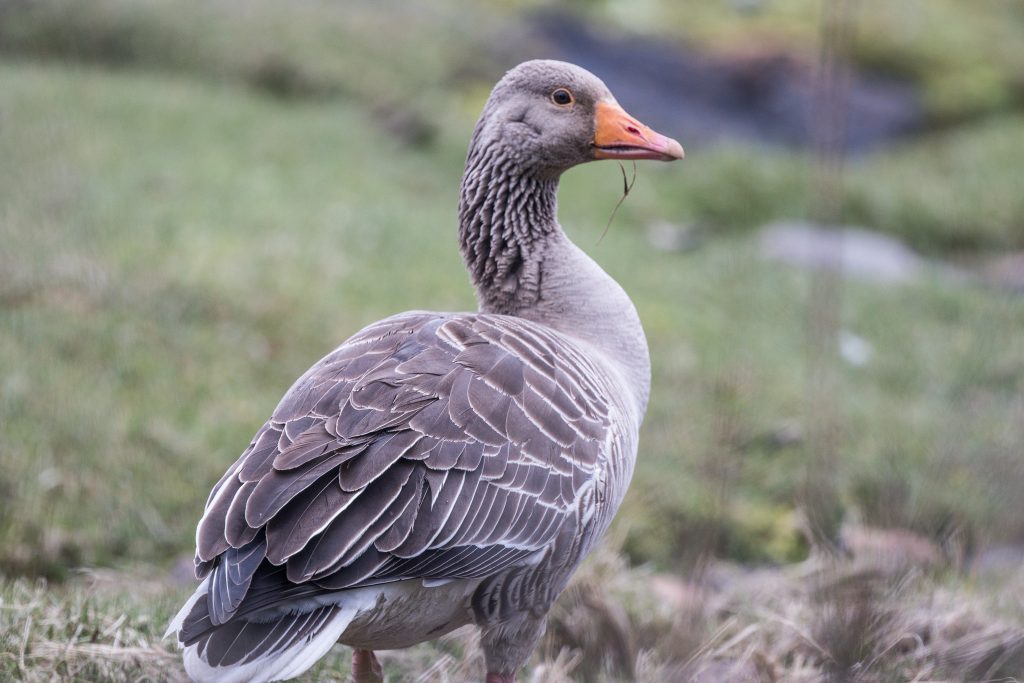 What a mean and scullery name is “Greylag” – a hunched old prisoner on kitchen duty. It’s a dull as ditch water name for such a bird of the wide skies and rugged coasts of the north.  There is nothing so evocative of  the change of seasons, as the contact calls of the wild geese flying over. When they land they shout out with the familiar honk of farmyard geese.  The greylag is the parent of our domestic goose, and there is always something a little domestic and fussy about it – certainly here where it has little fear of people and is a constant and amiable companion on the rough grassy patches between the road and the sea. The calls of the wild geese are at the very heart of the romance of the north. Whether they are calling each other to hail a departure or an arrival there is a mixture of sadness, aggression and joy in the sound.

2 Responses to Goats, Shags and Eagles