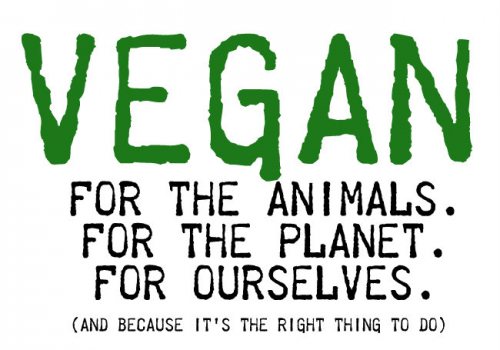 Having spent part of last week-end in an amiable argument with my daughter about her decision to cut out all animal foods from her diet, I decided to watch “Food Unwrapped Goes Vegan” on Chanel 4. I was shocked. Even the ads were shocking. What shocked me was not the topic, but the assumption that it’s perfectly OK to fly to California to “meet with” some expert who will explain something. Even more shocking was the assumption that becoming vegan meant buying processed foods which, it turned out, were more expensive than the meat equivalent because the processing wasn’t yet scaled up to the demand. Much of the programme was taken up with the quest for a vegan burger which, as a result of massively complex processing, was almost indistinguishable from the real thing.

In a programme full of stupid gimmicks which, like the horrible advertisements which punctuated it, gaily assumed that our world of over-consumption was absolutely normal, one report stood out, and I forgave Jimmy Docherty and his crew much for creating it: a graphic illustration which compared the amount of land needed to produce a kilo of vegan food with its meat equivalents. From the small square superimposed on a green field which represented the vegan food, the drone camera zoomed out to the larger chicken and pork squares until it reached the massive beef square. Even though I had a rough knowledge of the figures it still shocked me and seemed to genuinely impress the presenter. (I couldn’t remember the exact figures and couldn’t find them in an internet search – anyone remember?)

My purpose here is not to argue the case for animal food over plant food, but to challenge the assumption that it has to be “all or nothing” – that to save the planet we have to become something, subscribe to a doctrine or endorse an “ism”.

I suppose it gives the ego a hit to make a big life-changing decision: “I will not eat anything which comes from an animal”. It’s simple, easy to understand and gives you instant membership of a feel-good club of like-minded people. But real life is not that simple. Exchanging one kind of processed food for another may indeed enable more people to survive on the same patch of land but it does nothing to stop the damage done to our environment by the industrial production of, for example, soya and palm oil – two food industry staples. I’m not suggesting here that all vegans eat processed food, but there do seem to be a lot of foods engineered to replace meat and dairy products with foods which taste and appear similar.

Up against veganism  are strong but complicated arguments about marginal land use highlighted by the “rewilding” movement. There are, for example, great health benefits from eating pasture fed meat as opposed to grain fed meat, and wild meat such as culled venison or rabbit as opposed to farmed meat.

Then there’s sugar. There is no word for a diet which excludes refined sugar – latin fails us here. The sugar cane and sugar beet industries are arguably not as damaging to the ecosystem as the dairy and beef industries, but refined sugar has done great harm to many of us, especially our children, and has, unlike dairy products, no nutritional value.

The vegan members of my family are still the same intelligent compassionate people they were before making the commitment, and I absolutely respect their motives, but I don’t think joining an “ism” is the best way to achieve a healthy diet which reduces our carbon footprints. My prescription for the right diet would be focussed on “natural” and “sustainable” foods. It would use the word “avoid” rather than “cut-out”. Here are some examples:

There would also be positives such as:

In the crazy world of today’s politics joining an ism has much more clout than this kind of exhortation, but I hope in the politics to come that we might have a tax system that backed these principles. I would hope to see price penalties attached to junk food and price advantages to natural and sustainable foods. Watching “Food Unwrapped” though, it seems a long way off!

This entry was posted in Opinion. Bookmark the permalink.