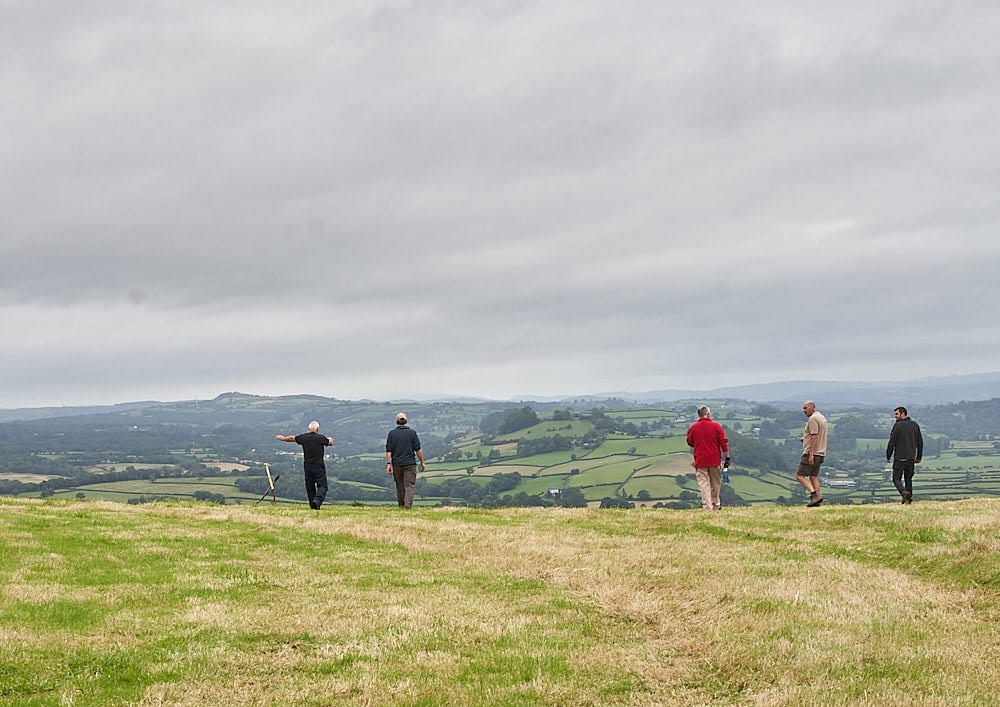 A few days ago I joined a group of National Trust volunteers and three of the team from Biophilic Wales in a sort of reverse hay-making operation. (BPW is a 3 year project with the primary aim of enhancing and restoring spaces where people can enjoy and be restored by the natural world.) Overseers were Stuart and Carol from the National Trust and Kathryn from BPW.

We were at Paxton’s Tower overlooking the National Botanical Gardens at Middleton, near Carmarthen. The tower is surrounded by traditional grassland and woods and enjoys spectacular views across the Towy Valley. 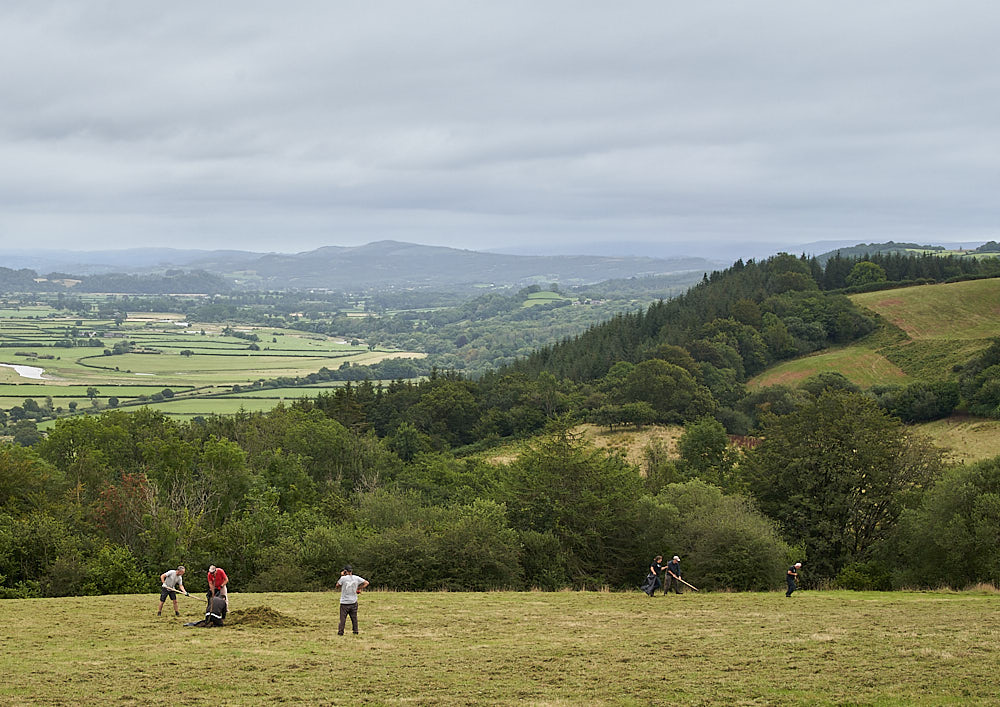 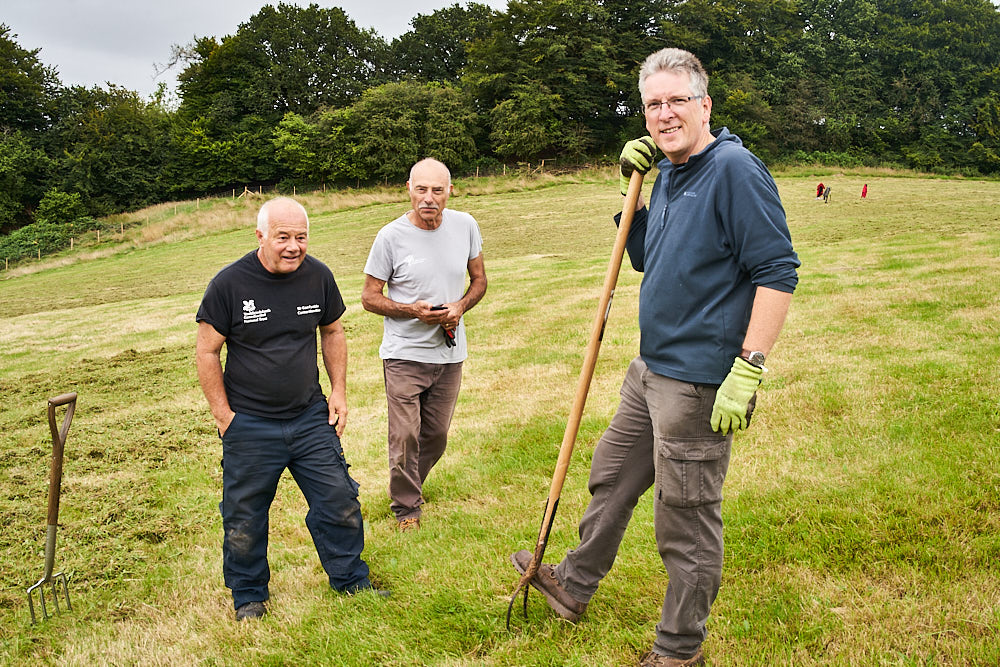 Here are Pete, Simon and Rob taking a short break from what must be one of the most bizarre operations in the arsenal of those trying to re-create a more natural environment. We were spreading “green hay”. The idea is to take freshly cut grass from a well-established flower meadow just as the seed is ripening, and spread it over grassland with much less diversity of plant life. It’s a natural way of broadcasting seed which not only benefits insects and the creatures that feed on them, but if subsequently managed properly, it regenerates the soil.   Oh, and it will look lovely! (Image from Carmarthenshire Meadows Group)

For me as a youngster, haymaking was part of life. A mower towed by a Fergie tractor with snickety to-and-fro blades and a swath board would leave a neat row of long grass as it moved round the field from the outside in. We village kids would stand around with catapults (and later guns) waiting for the rabbits trapped in the middle to make a run for it. After a day or two of drying, the hay was turned and when properly dry made into small oblong bales by a baler towed behind the same old tractor with its metal seat on a single leaf spring. We would follow the baler and stack the bales into small piles ready to be picked up by a trailer and taken to the barn. Once there they would be unloaded onto an elevator which lifted them up into the barn – our warm winter playground. It was a process which used a lot of man-and-boy hours but comparatively little oil-based mechanical horse-power. It was good healthy work in the open air surrounded by the glorious summer smell of drying hay, and something I looked forward to every summer.

Now the machines are much bigger with 200 horsepower not uncommon. The work is done by contractors who move from farm to farm with long queus of slow moving traffic behind them. Two men with two rigs will mow and turn a hundred acres, bale the hay into huge cylindrical bales, wrap the bales in plastic and finally use a powerful fork lift on a tractor to stack the bales in an outdoor dump site – a classic blot on the landscape.

What made the operation here so odd was that the Trust were using contractors with machines which towered over us to cut and deliver the grass.  We peasants with our pitchforks were working alongside mega horsepower in an operation which would be incomprehensible to the traditional farmers of my youth – all that work and no food to show for it! It was, Stuart explained, the first time they had done this at scale . There would be an opportunity to try different methods next year because the whole operation would need to be done again! 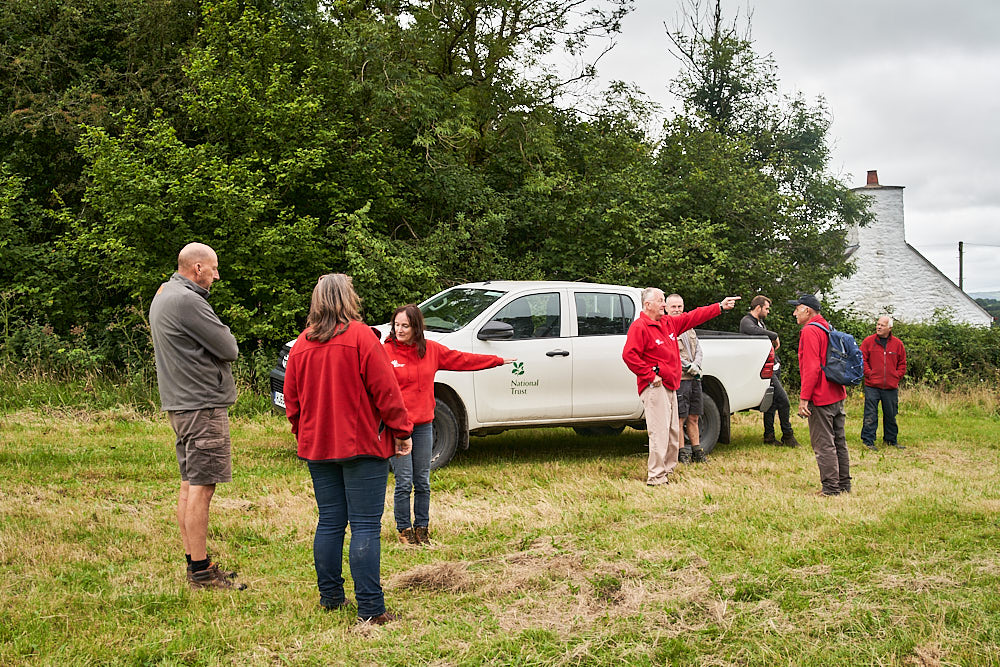 The horsepower kept us all waiting for an hour  then dumped 22 tons of grass, clover, knapweed, plantain, yellow rattle and lots more into huge piles which the peasants with their pitchforks had to spread before it began to heat up.

It was hard work. Stuart’s feet got hot and Ossian for one enjoyed lunch enhanced with two huge cakes baked by Carol. 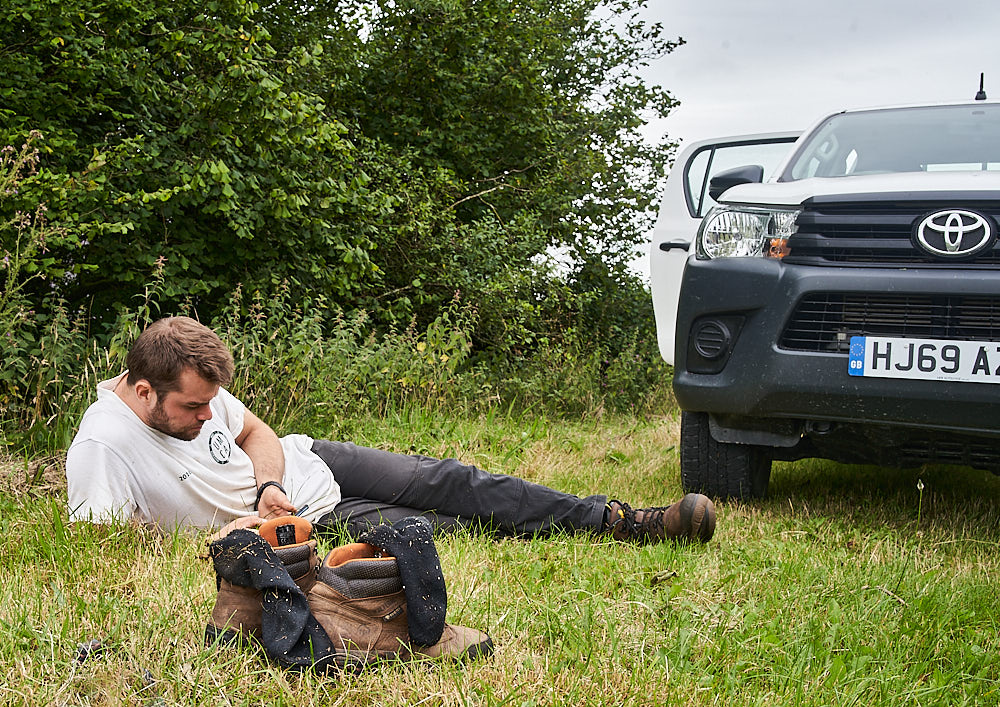 It takes a special kind of person to persuade a group of people, most of them well into retirement, to do hours of hard unpaid manual labour in steep fields and send them home fulfilled and happy; well done Stuart, Carol and Kathryn!