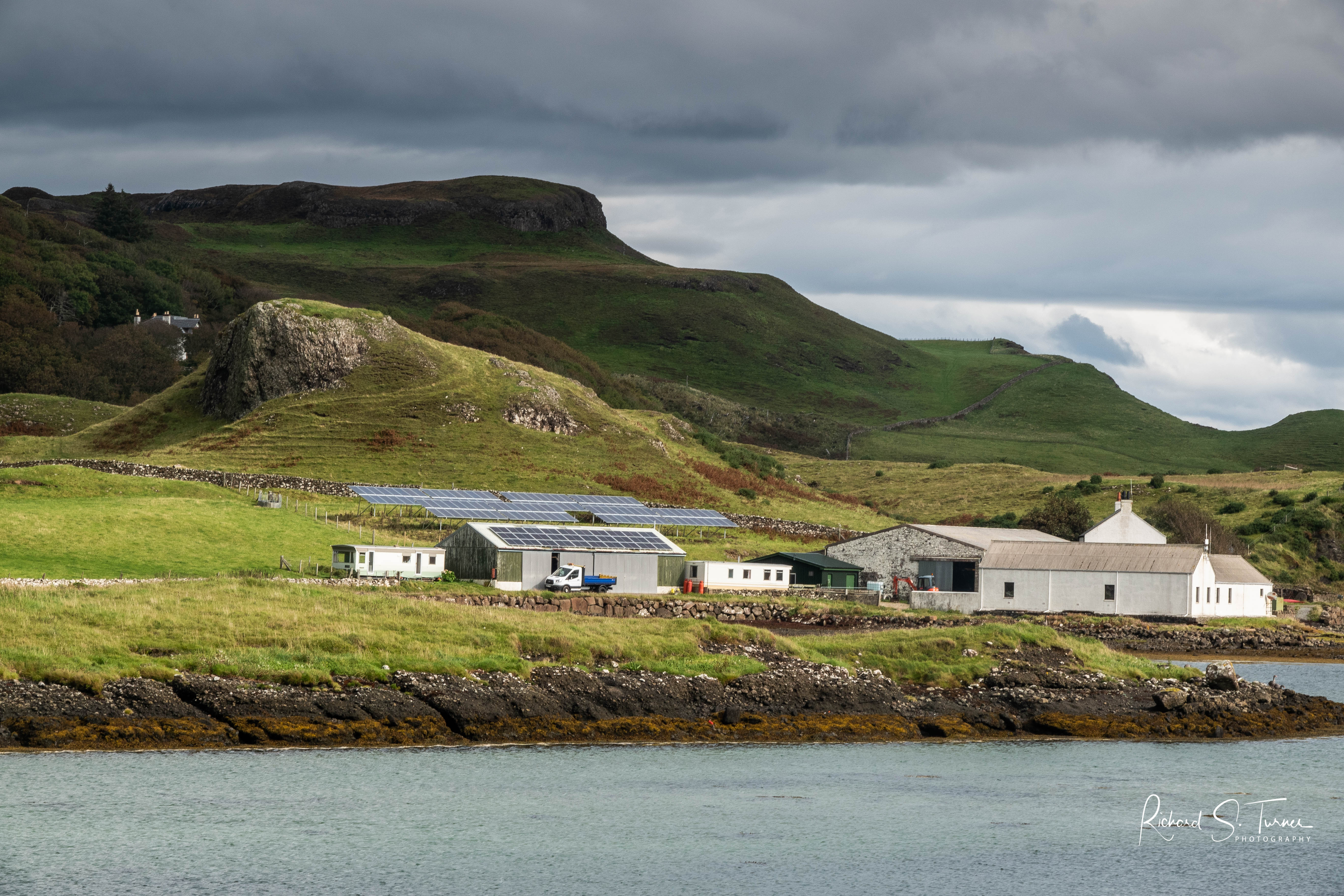 When I arrived yesterday, after a long, and at times rough, trip in a small ferry boat, things didn’t look good. I did have a choice though: a pod with no heating or cooking facilities, or a bunkhouse 10 minutes walk away. It had been a long crossing and I was feeling tired and anxious.  After I had carried the heavy bike bag and the two chock-full rucksacks the quarter of a mile of grass track up to the bunkhouse, I got a culture shock.

It’s a bothy – a primitive black house with mod cons grafted on with little regard for aesthetics. The floor is painted concrete, well scuffed; the furniture worn-out cast-offs; big damp patches on the walls; central overhead lighting. The bunks have no reading lights, and the two-bed room where I am billeted almost no daylight. There is a rusty coal/wood stove but no fuel or kindling.  But it does have this view: 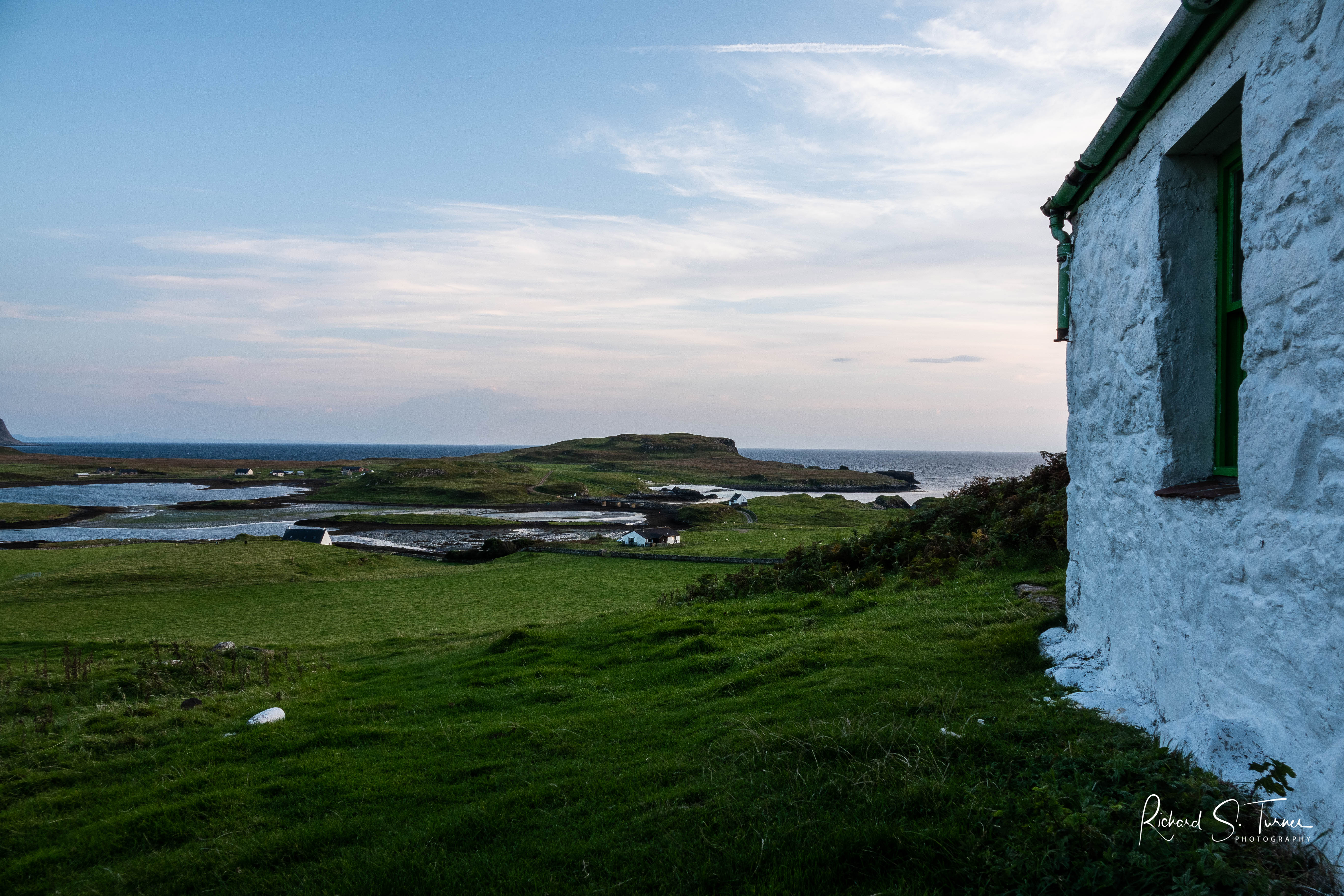 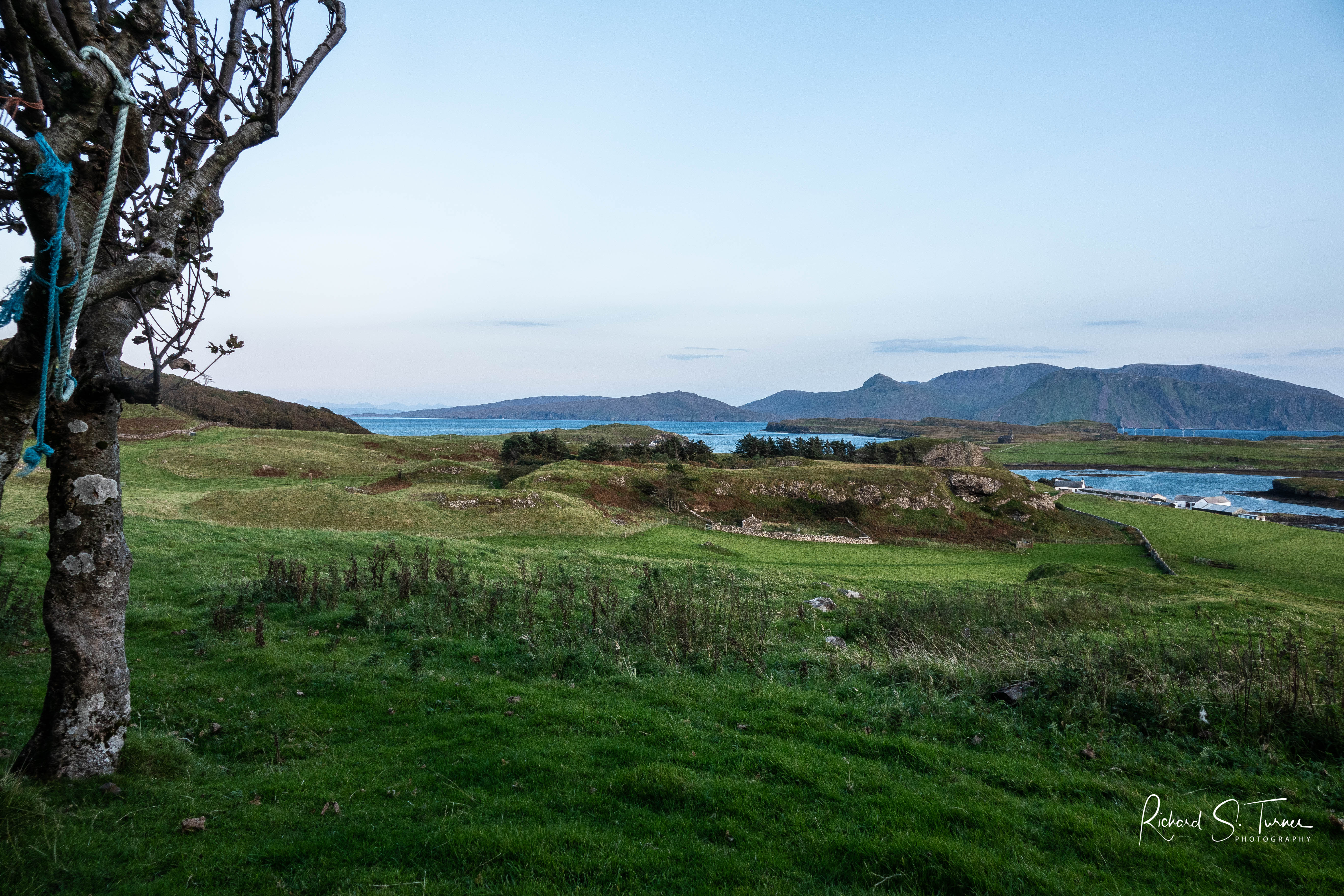 It also has a gas cooker, a fan heater, and points where I can charge the camera batteries and phone. It’s quite well equipped, and outside it is unseasonably warm – I left the door open to let some warm air in.  I sat outside watching the sea and listening to the calls of the greylag geese flying from one field to another.

“They’re pests” said Isebail, the campsite owner or manager, as she drove me here in her 4×4. “they eat so much grass”.  It seems our native strain has now gone feral, like the alien Canada Geese which you see everywhere. They’ve realised that being near to humans is good strategy, though they still don’t quite trust us.

Today after a fairly good night thrashing about in a sleeping bag, I have no milk, and I have to say that builders tea without milk or sugar is horrible. Muesli with hot water is OK. I have honey but no fruit, and black instant coffee, and I have a spectacular sunrise:

I went off exploring along the south coast, and followed some arrows to see where they went. The map said in gothic script “Souterrain”, (Underground), and there at the end of the arrow trail was something which looked like a badger set for humans, or houses for Neolithic hobbits: a large mound with two openings which were too big for badgers but small for humans. Human though they must be because above each is a carefully built stone lintel structure. 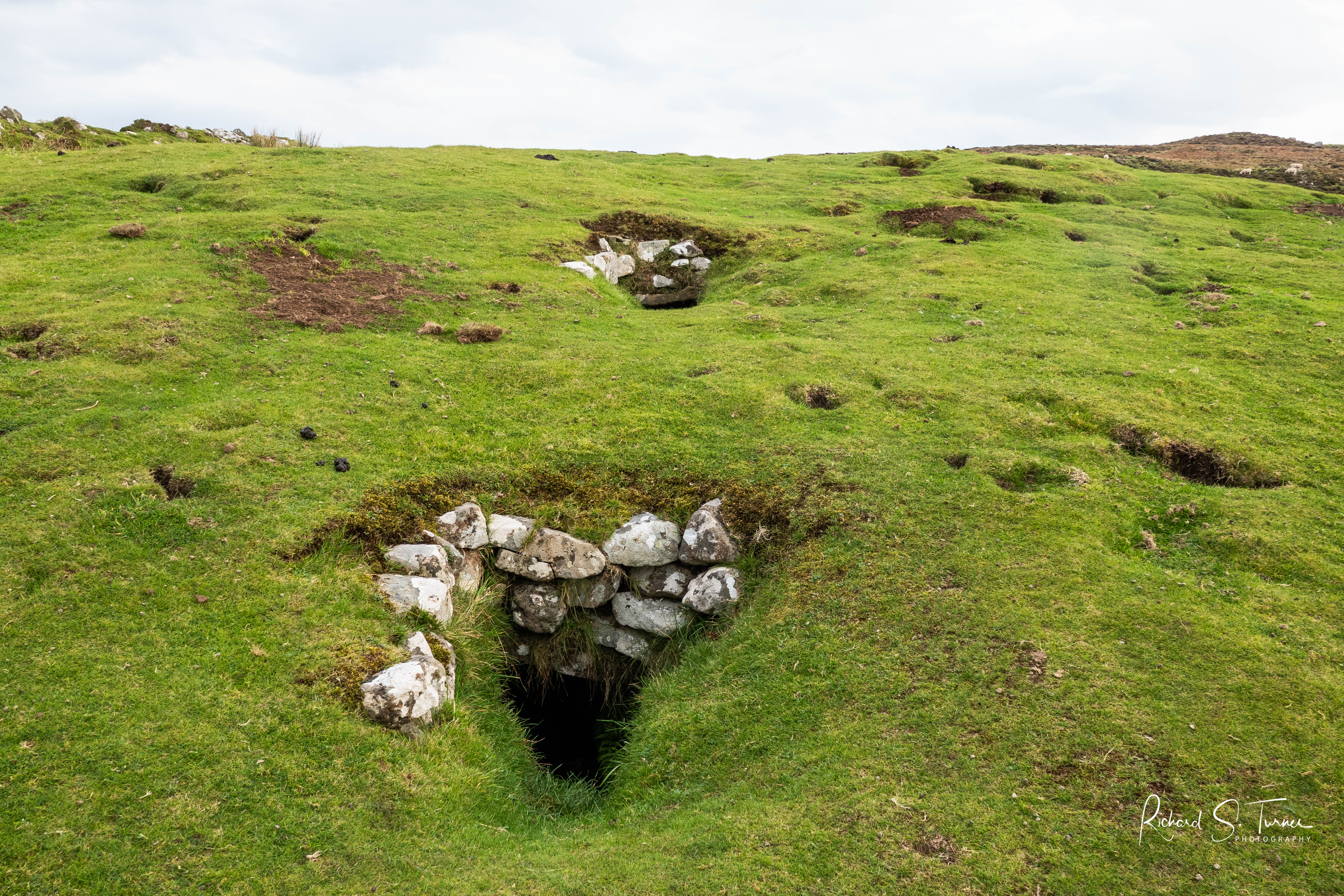 After a frugal lunch of packet soup and dried crisp bread rolls with cheese, I went to find Isebail to see if I could use some scrap wood outside to light the stove.

“There’s a problem with that. I didn’t know until just now, but the old stove is being removed today. If the wedding guests have gone, we can move you to the caravan”

The thought of moving all that stuff again! I said I would use the fan heater, but on the way up to the bothy I met some of the workmen and it turns out they will be doing a lot more than just taking out the old stove. They are putting in a new one with new register plate and new chimney , but they offer to move my stuff for me. They are pleasant and friendly, and one of them asks if I am coming to the party tonight?

“I thought that was last night – the wedding”

“No it’s the end-of-season closing night of the cafe – 6 o’clock. There’s a free meal too!”

So, this is it: a do or die chance to get to know some if not all of the local residents. I will have to go.

In the afternoon I walked westwards and found a strange ancient fortress and beside it a ruined house or barn, just a few metres from a small beach. For the first time in many years I felt the old romantic longing for a tumble-down cottage to be brought back to life in a perfect setting. Dismiss the thought! That’s the last thing  you need to be doing in the next few years. 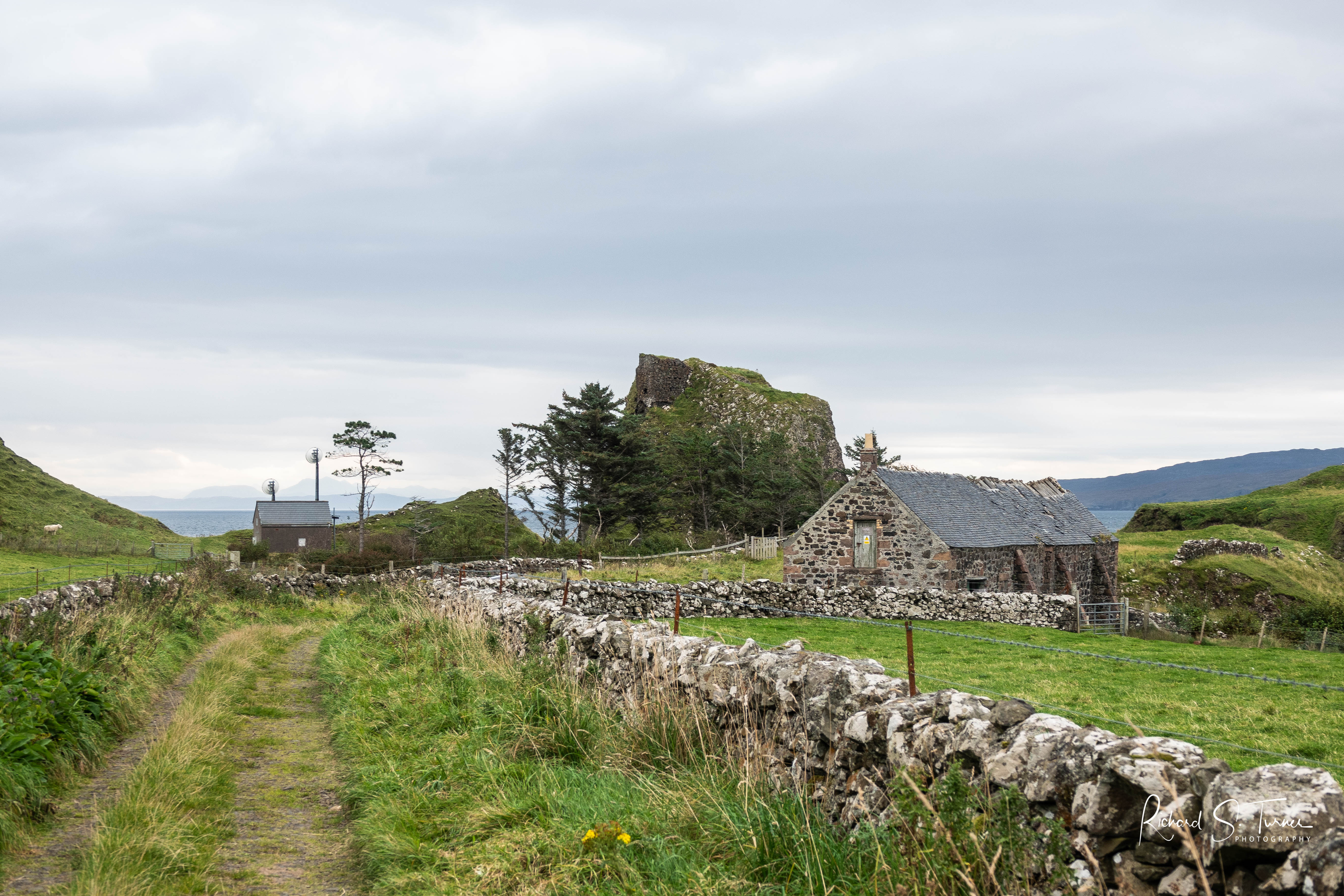 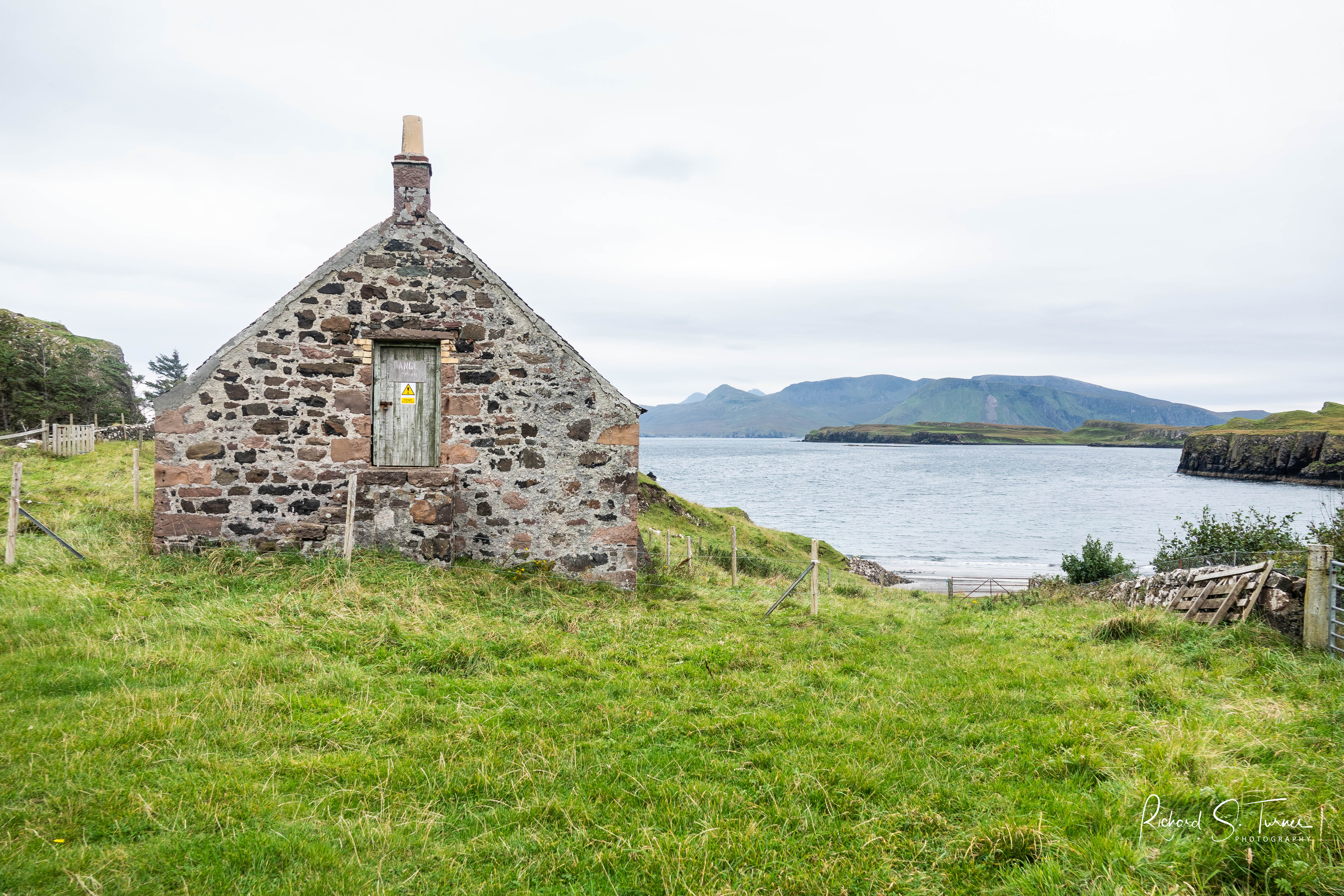 I didn’t get the meal, and I only met two of the locals, but I made a new friend who, in an amazing co-incidence knows Steven Pocock, from our village – the man who inspired me with tales of the Highlands. His name is Chris Fraser. He was at school with two of Steve’s brothers, in Inverness, and his sister knows Steven. He works as a contractor for National Trust Scotland. The problem now, back in the bothy, is that chatting to Chris involved drinking two pints of a wonderful local brew which, on top of the Scotch I had before leaving, and the walking to and from and the other two walks I did today, means I am nodding off. Writing now is too difficult. Time to wrestle with the sleeping bag.

This entry was posted in This Wild Life, Travel, Uncategorized. Bookmark the permalink.

2 Responses to Isle of Canna