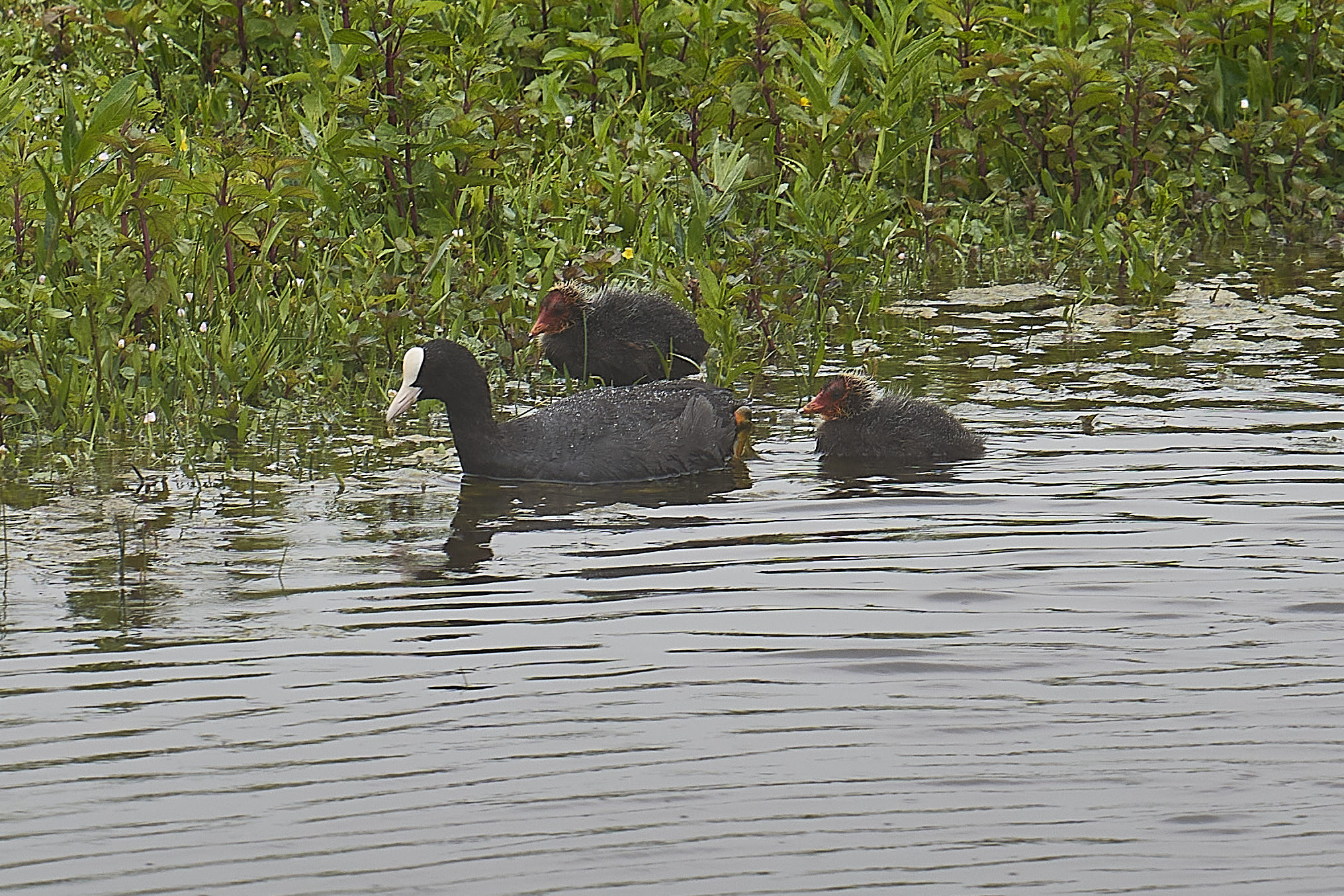 Tuesday: I’m in a rather grand “Observetoire” in the  marshlands near Carentan in the Cherbourg peninsula. I’m the only person here. It’s raining, and has been all day, which means the light is poor and I need the big lens, which I brought here in my backpack.  I’ve kept everything dry and I’m just enjoying this Coot and her chicks when I see a large mammal moving about on the bank. Could it be a beaver ? They are out there in France. 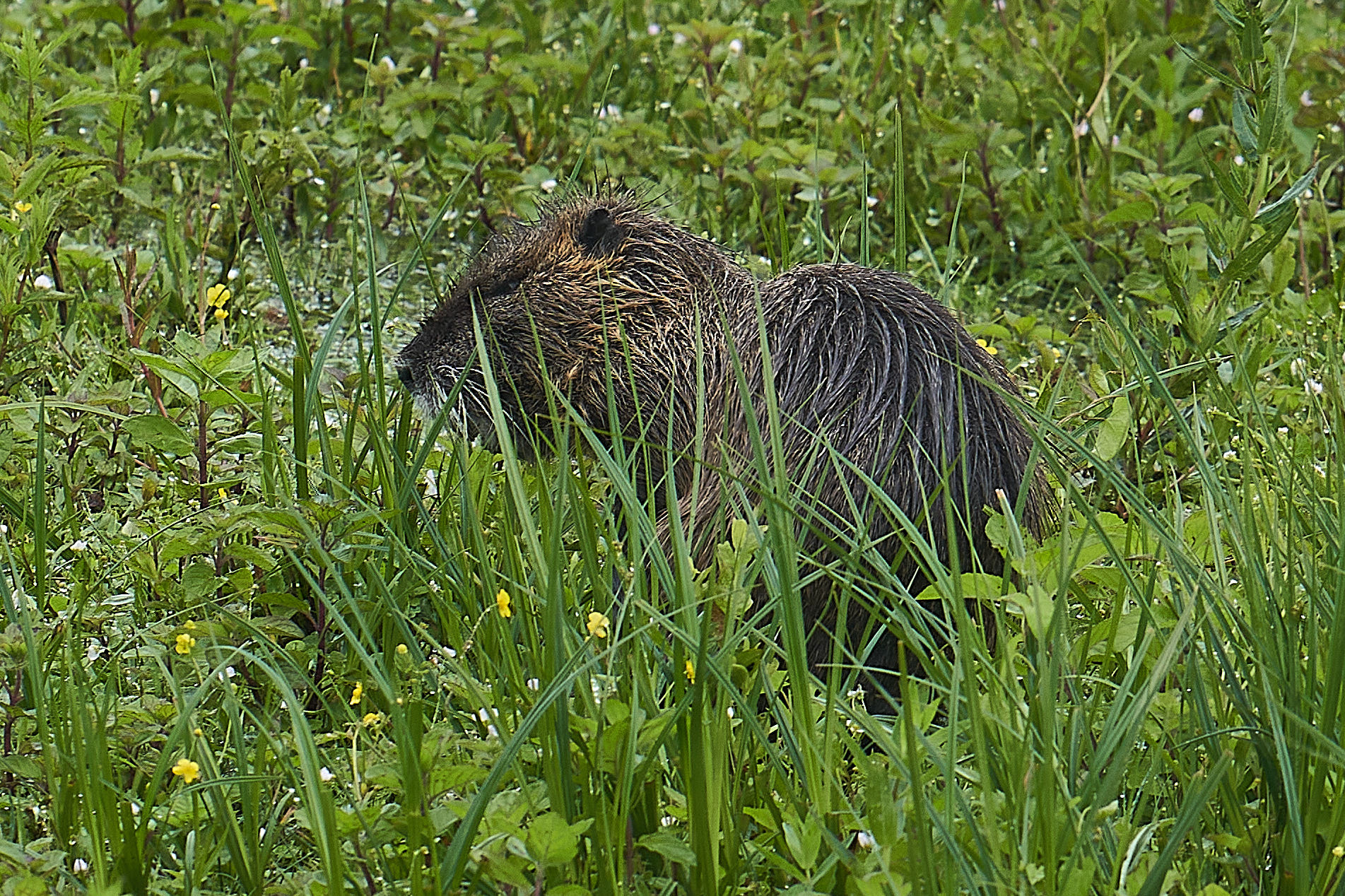 No it’s the wrong shape – too squat and heavy. It’s the invasive Coypu or Ragodin. They may be a pest but I’m thrilled. I’ve never seen one before and there it is in easy range of the camera.  Then another turns up and a battle ensues in which one was chased, terrified, round the lake. (The one being chased is mostly underwater )

My eye is drawn to a group of white birds on an island in the lake. They are all members of the heron family, and they are all immigrants. Little Egrets have been colonising for 20 years or more, but the Great Egret is a newcomer, the Spoonbill a more recent newcomer, and the Cattle Egret the latest of these white invaders. In the first picture I can see what at first I take to be a Great Egret’s chick but then realise it is a Cattle Egret, so that’s two species. Then I realise that one of the big ones is a Spoonbill, and tucked away behind the big one is a Little Egret. Although I could never quite catch all 4 in one shot, I could see we had a strange phenomenon – 4 species similar in genetics, shape and colour seem to enjoy each others’ company. 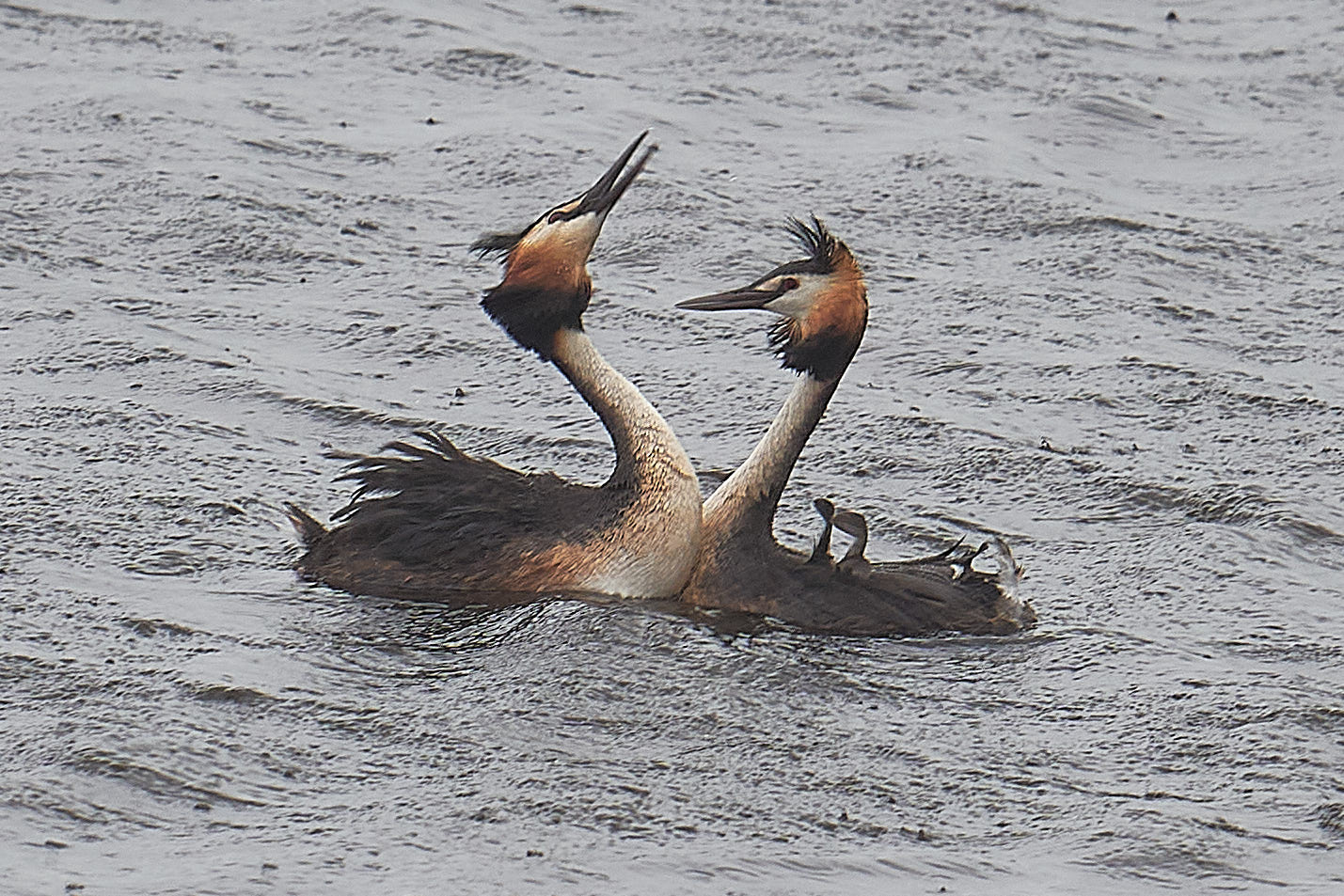 I watched two Great Crested Grebes launch into their extraordinary courtship display. There’s a lot of bobbing and head-banging, but the climax is a series of head shakes. There is a rhythm to it; it’s a dance.  First one bird does the shake, then the other in the opposite direction. 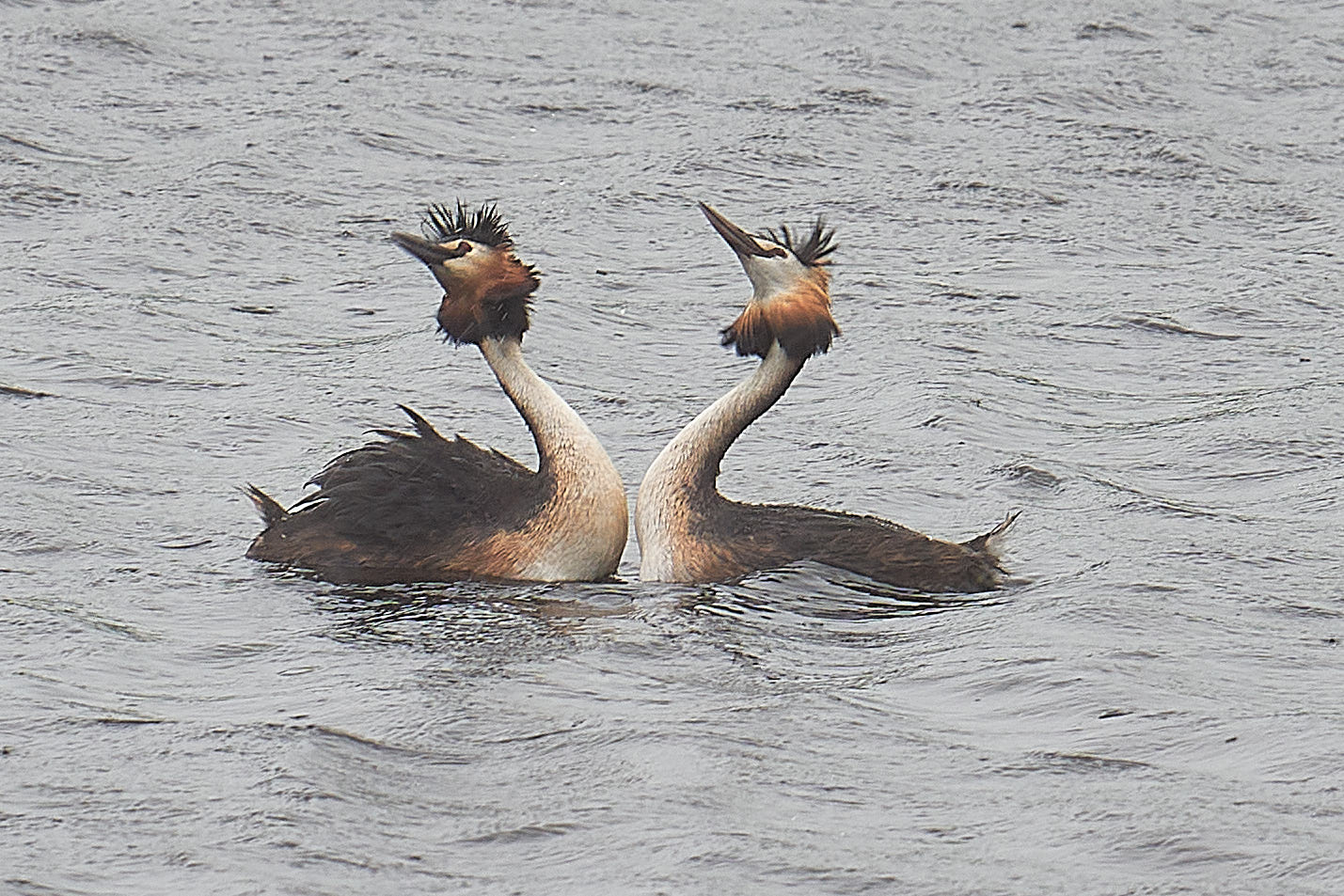 Calm descends again; more rain. Damp but happy I trudge the 1k back to the visitor centre, alone again and intrigued to see a stork’s nest on the horizon.  The forecast for the next day is good so I decide to stay nearby and come again. 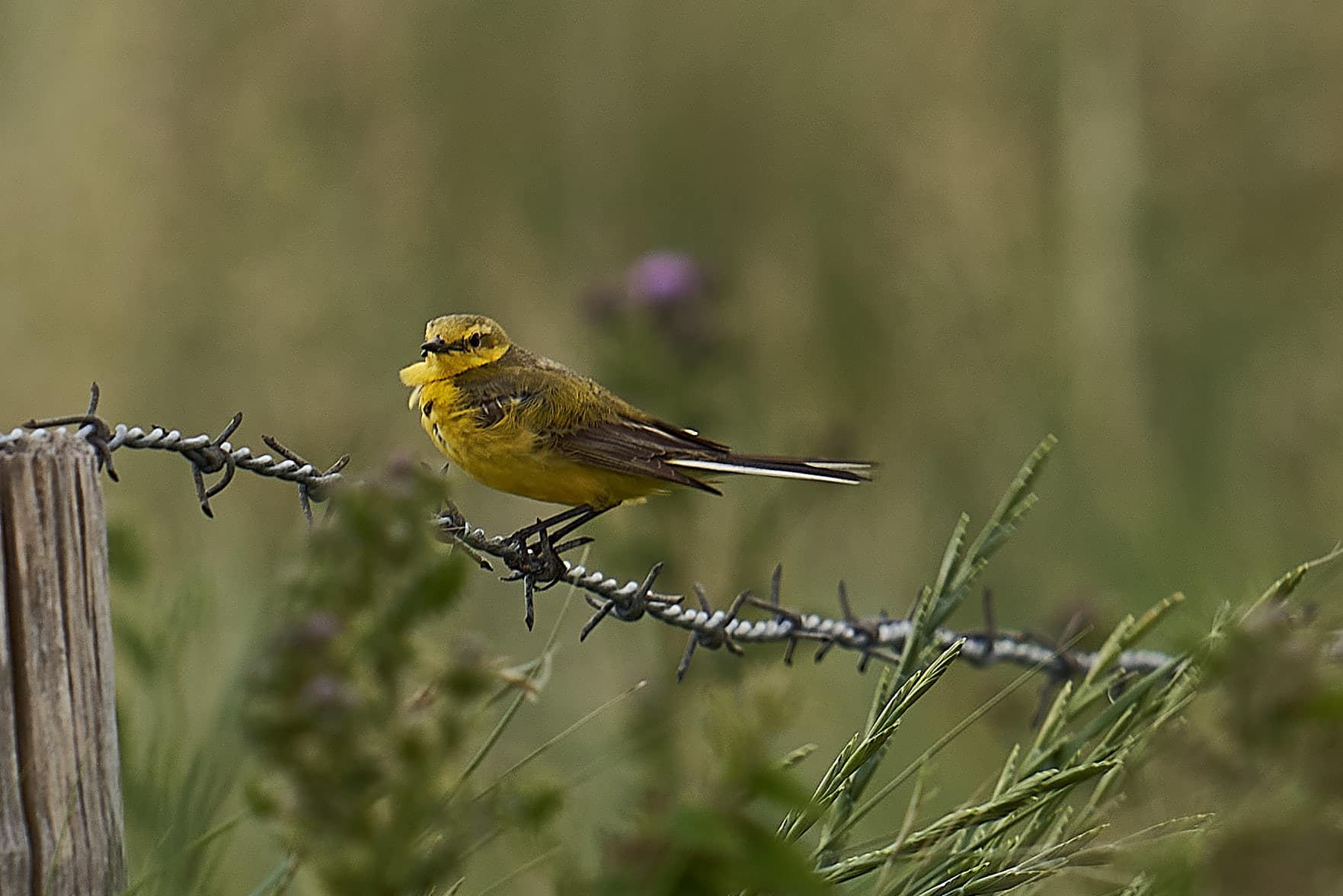 Before the reserve opens I make a trip to the coast and find another bird I’ve never seen before: the Yellow Wagtail. There’s nothing much happening at the lake so I decide to go in search of White Storks. This spectacular bird has recently nested in Britain for the first time in 600 years, but they are fairly common in continental Europe. This time there are a few more watchers and one other photographer. I manage to explain to him in French about the 4 species of heron-like birds together. Nothing much has changed but the light, so, alone again,  I walk up a lovely undisturbed track towards something called the “Travellers’ Rest”. I can see the huge stork’s nest up ahead, and manage to get quite close. 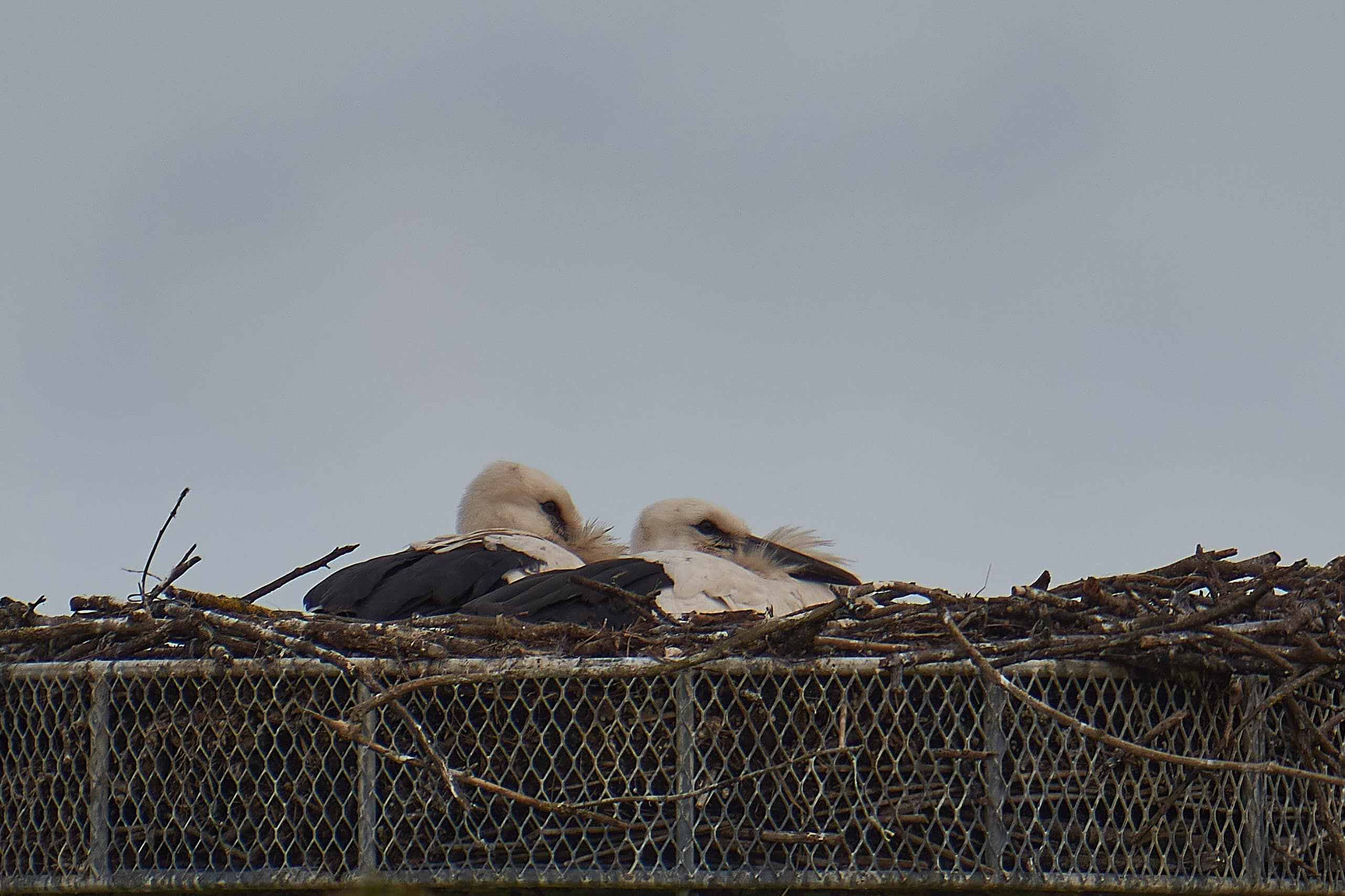 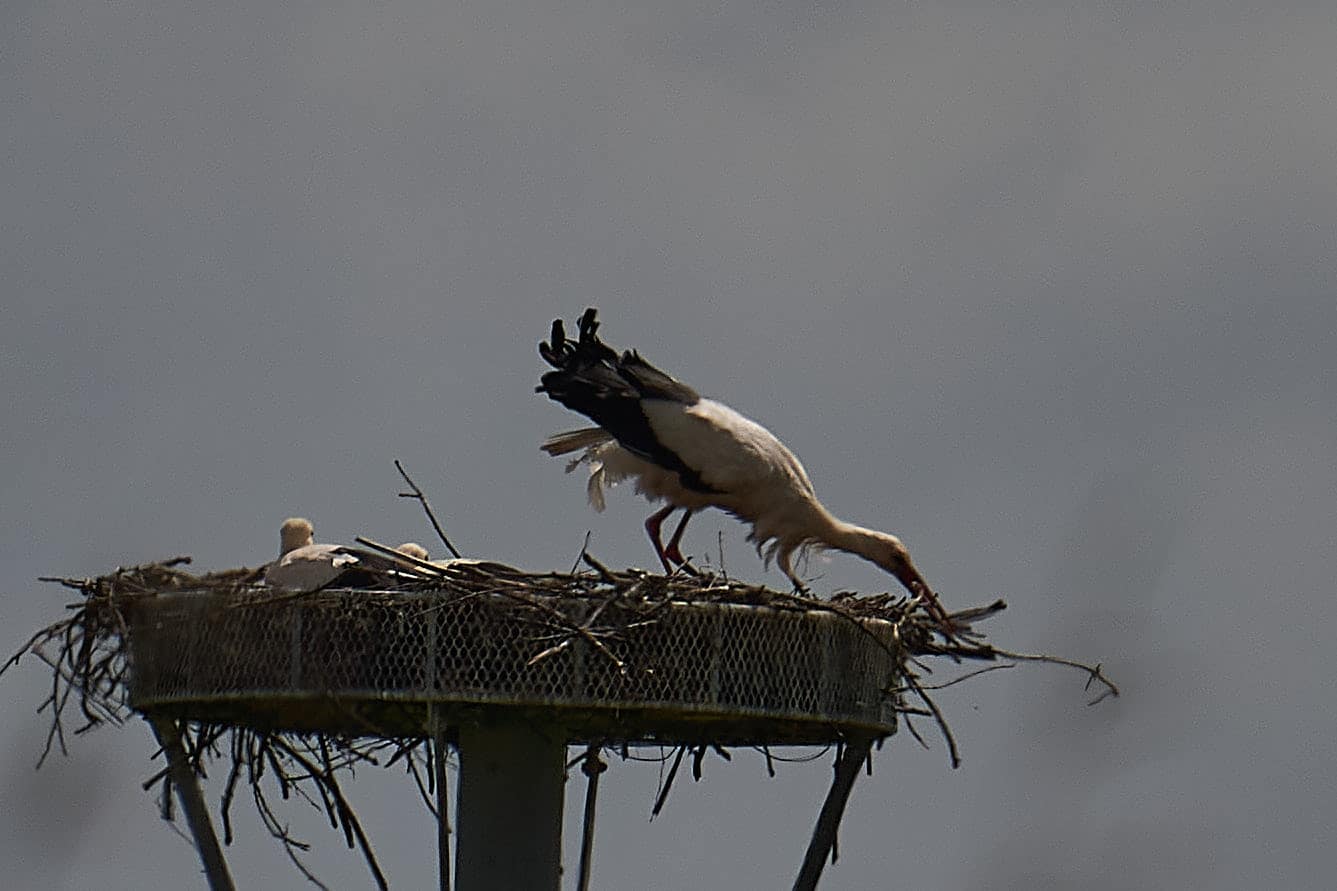 A little further on and I reach my destination. This is what I find: 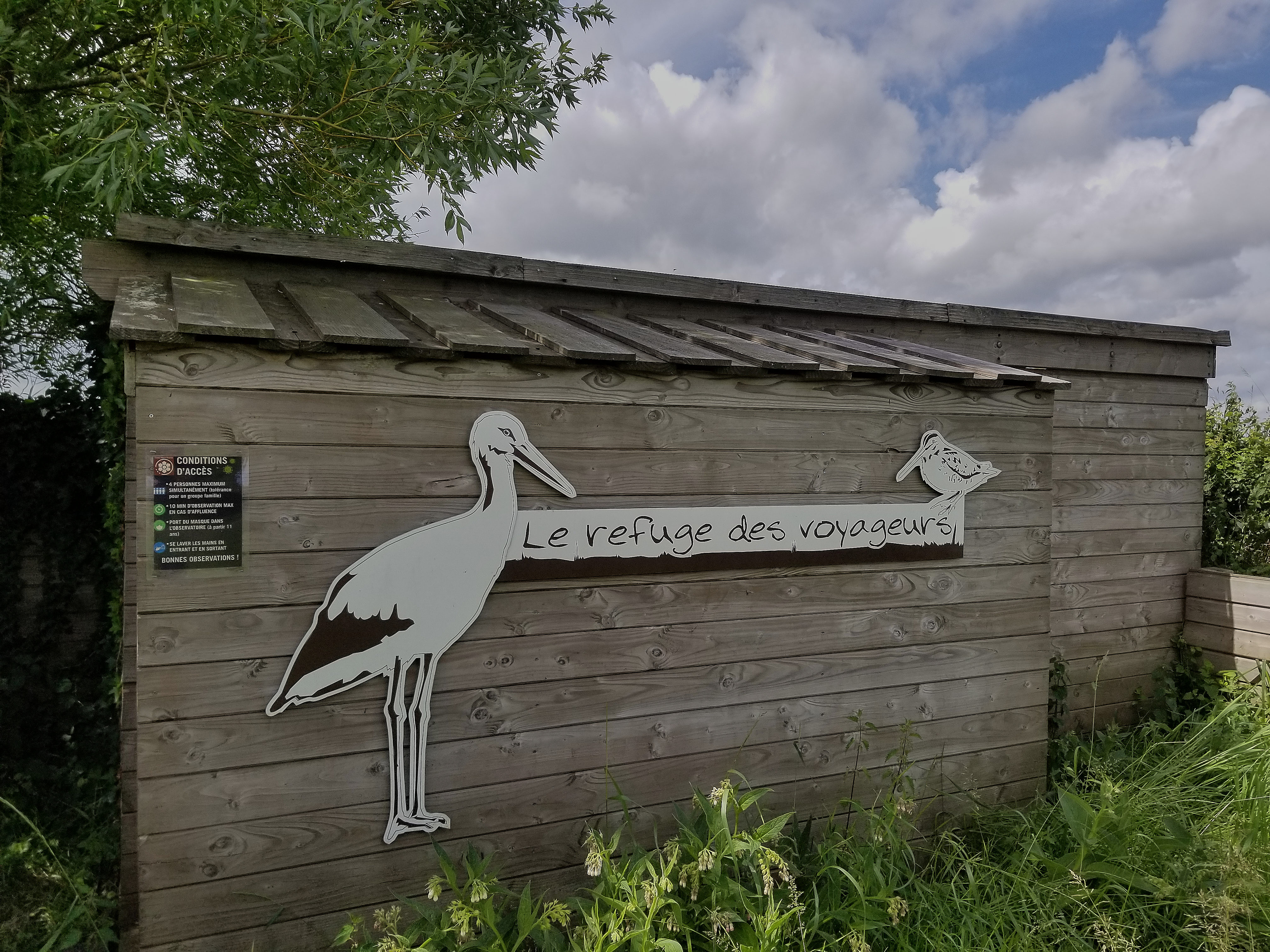 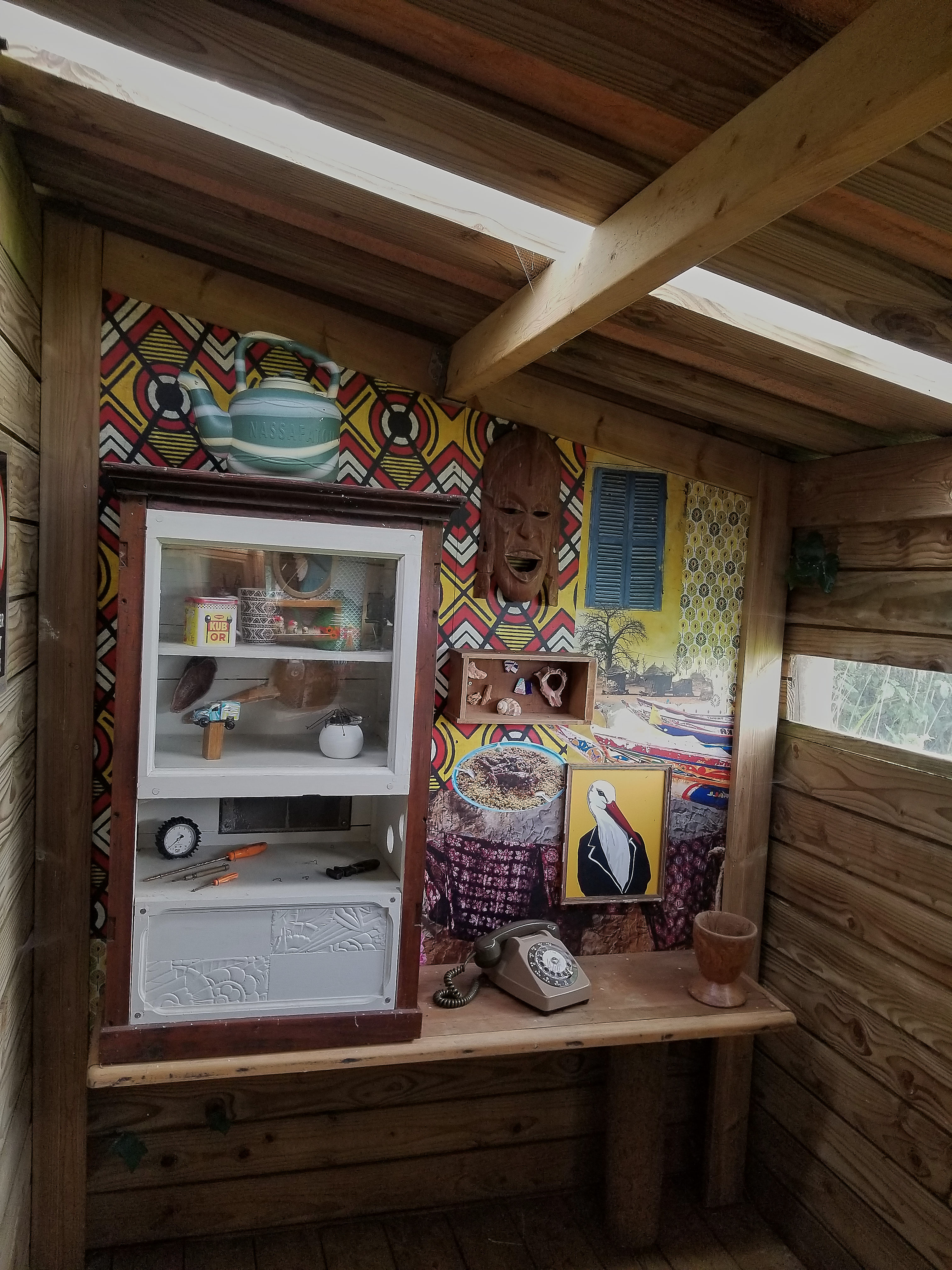 I’m overcome by the sheer niceness of it – only in France! Not for too long though, It took a long time to get here so I set up the camera and watch the rough grass beyond. I didn’t have long to wait: 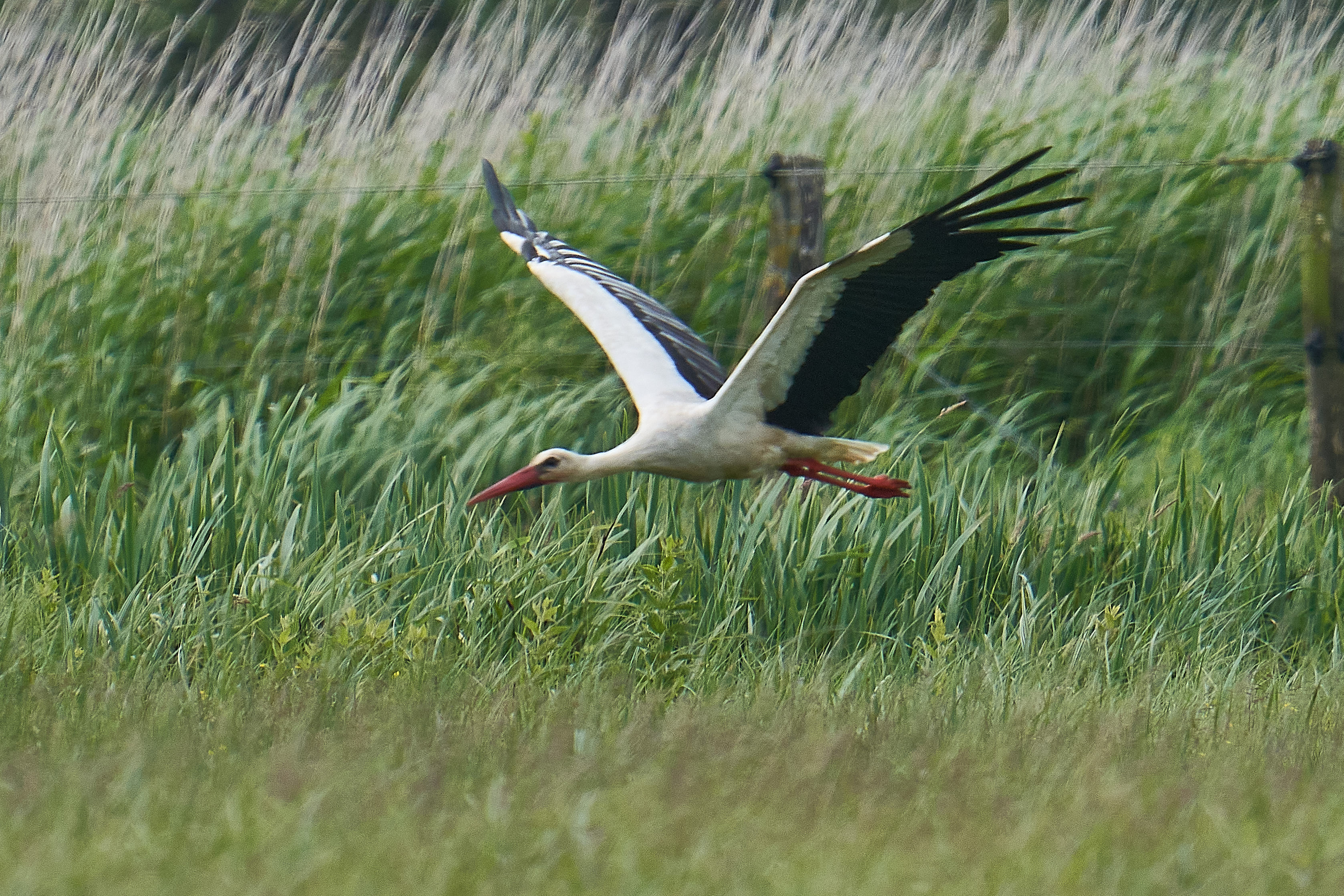 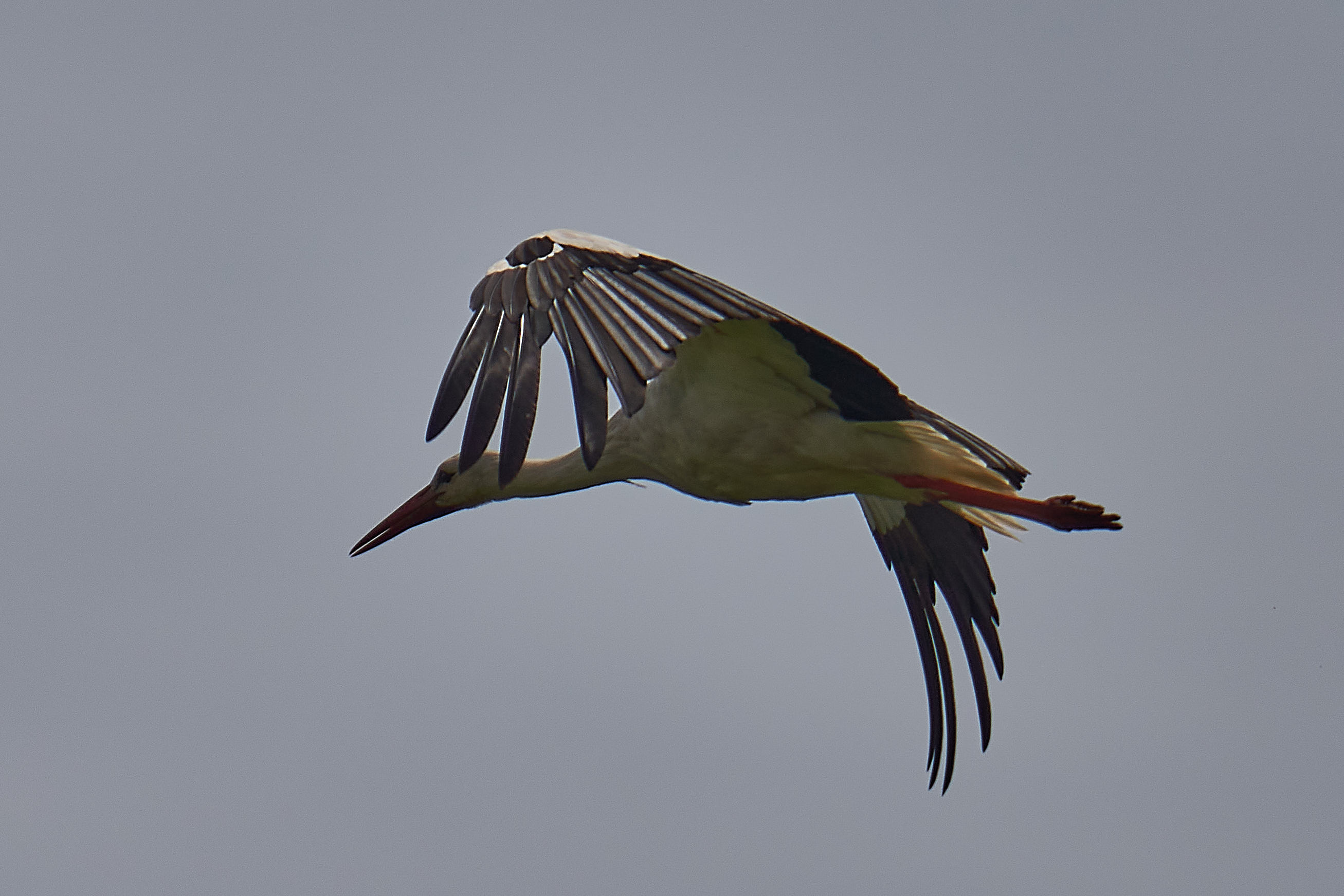 2 Responses to Nature in Normandy