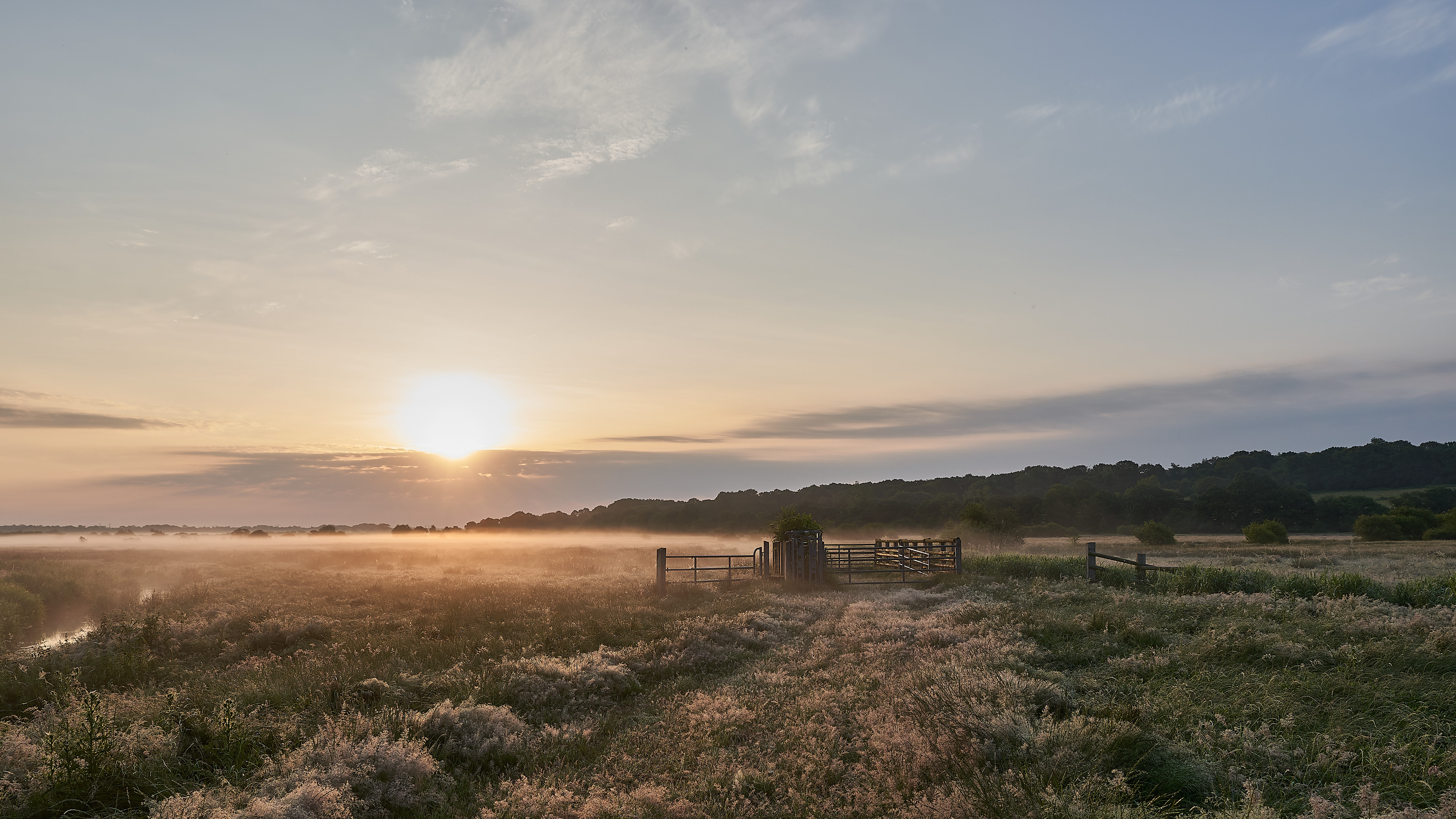 The “Regional Park of the Marshes of Cotentin and Bessin” takes up most of the central part of the Cherbourg peninsula, and I’m keen to explore as much of it as I can while I’m here, despite the fact that this is the low season as far as wildlife watching is concerned. The French word which translates as “Marshes” is “Marais” and it seems to have different connotations here. I’ve seen huge flat areas of uncut grass with occasional ponds or lakes, but as far as I can understand from the “Paths of Discovery” the park authorities are slowly raising the water table and expect these huge hay meadows soon to become more like marshes.

I follow the recommendation of a girl at the visitor centre and drive to the other side of the peninsula to a large area of Marais. When I get there I find there are no paths, the grass is long and wet and it’s evening so I find a nice place to park up and catch the sunrise next morning, with the low light picking out the wet cobwebs and plants. 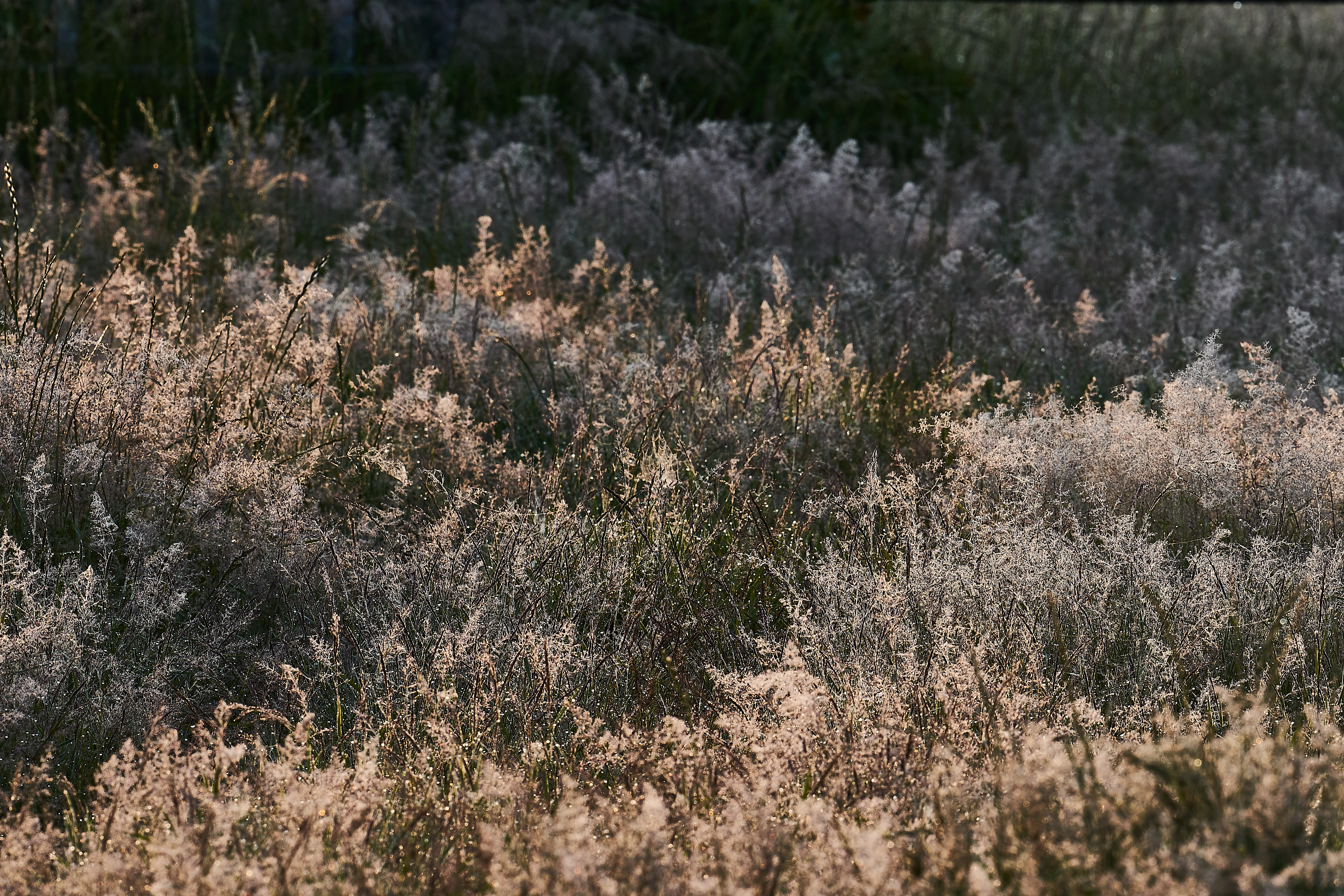 It’s wonderful, but apart from the snout of another Coypu, there are only cows to be seen, so I head for one more Marais, the largest,  on the way towards Bayeux and the ferry to Portsmouth. Here there is a long walk laid out, though the signposting is so erratic I depend on a French mapping app to find my way. The big beasts, the Harriers, Owls and Deer are conspicuously absent but there are compensations.

If you start with low expectations you’re not going to be disappointed, and I greatly enjoyed the tranquillity of these lovely places, doing my best to identify birds which were half familiar. These I think are juvenile Yellow Wagtails, and the bird in the bush a Reed Bunting, but any other suggestions would be welcome. 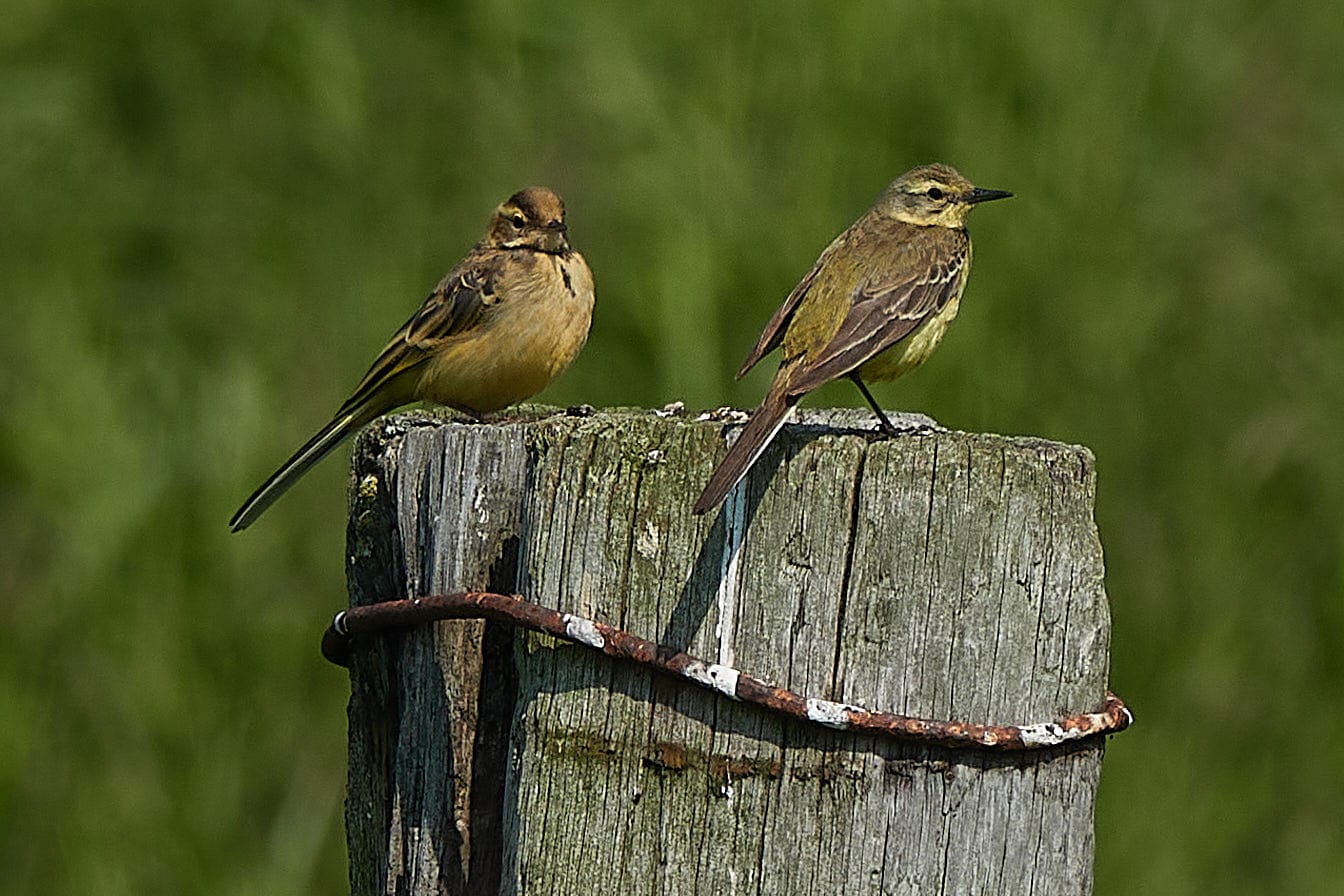 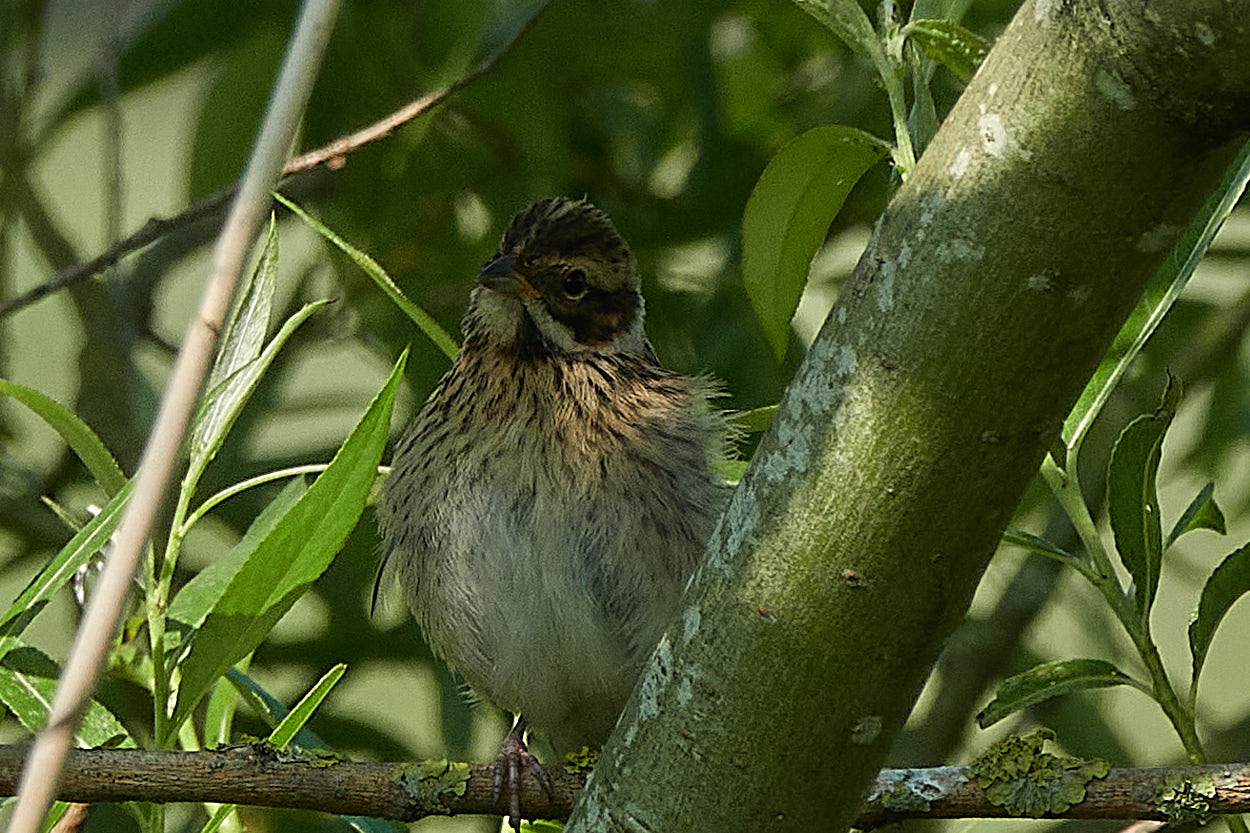 It was not until I got to the first of a string of hamlets I would need to walk through to get back to the van that I saw a pond – no fence, just grass all round it and almost no birds. Almost: there were a few brown ducks and there was something odd in the distance. It looked like a white bird with very black wings. Curious I moved slowly closer, taking pictures on my all purpose camera as I went (Sony RX10 mk4). 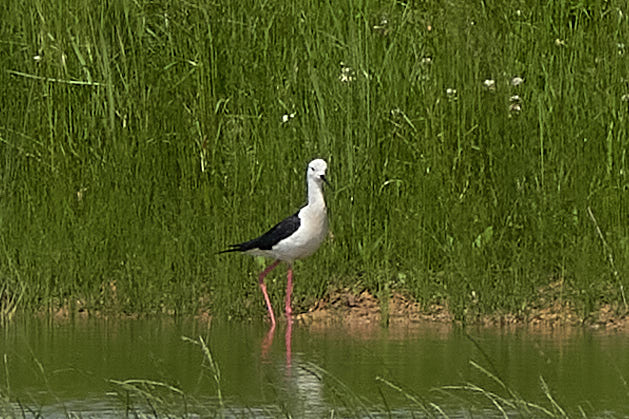 Yes, no doubt about it, this was a Black Winged Stilt, a very rare bird in Britain and hardly common in France. I didn’t try any closer  for fear of it flying off, but as I walked back I began to wonder if I could bring in the heavy artillery. First though there was another Stork’s nest: 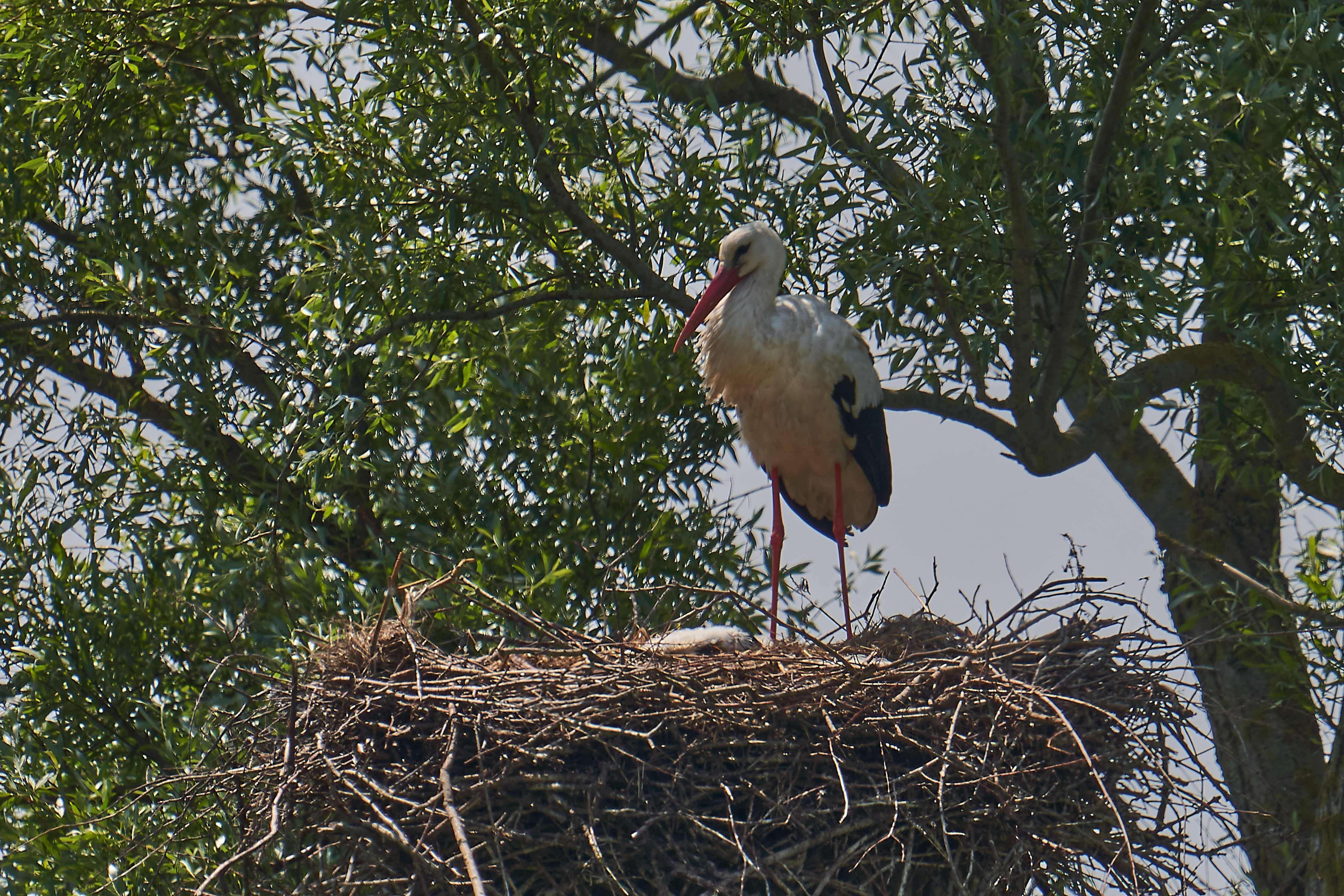 Back to the Stilt. The track was driveable. It was lunch time and there was no sign of human life in the whole area, so with no great expectations I drove back to the pond, got out the big lens, camera and tripod, and walked up. It was still there, but meanwhile a heat haze had developed and the Stilt was clearly more interested in sleeping than walking about on those amazing legs. Still, it was worth the effort, and the dragonfly was a bonus. 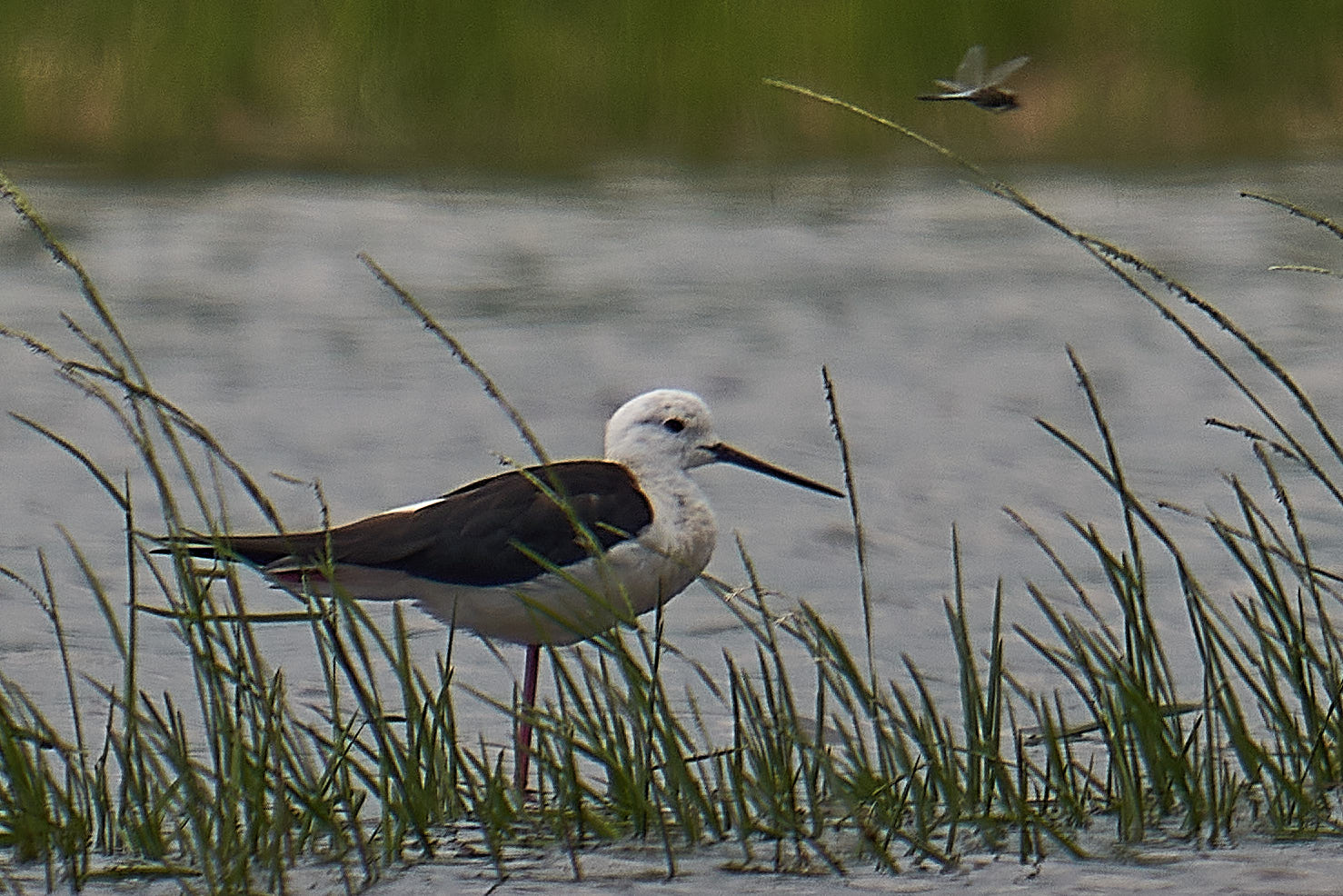 (For the technically minded, the last two pictures were taken with the “heavy artillery” – Sony A7R4 with Sony 400 f2.8 and a x2 extender.)