Ann and Stuart, a couple in, I would guess, their late sixties, seemed to spend all summer travelling round – mostly Scotland – in a fairly new van which Stuart has converted in very minimal fashion. I was fascinated by their way of life, and looked forward to learning more about them in the morning, but when Tuesday dawned, cool and wet, they stayed in their van until about 9:30. I had already walked down the road to the viewing point at the Sea Eagle’s perching site. I saw no Eagles, but did learn from another couple – from Somerset – that the gulls nesting on the little peninsula on the beach, were the misnamed Common Gulls – rare in southern Britain. They have the dainty look of the Kittiwake, but with black and white wing tips. 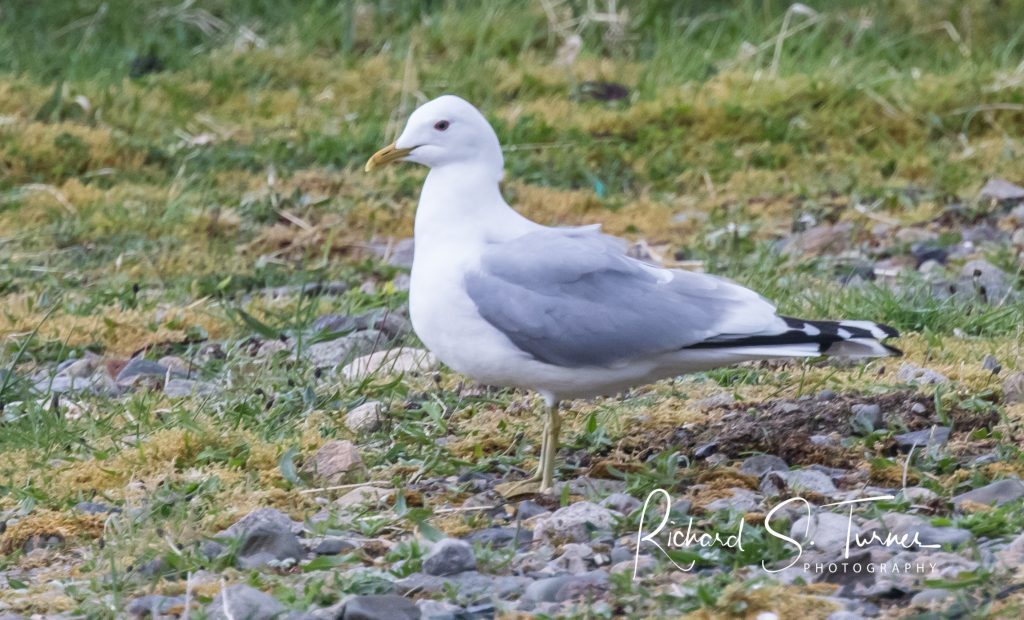 My next plan was to do a fairly long walk to a known Sea Eagle  site on Loch Ba – and no, there weren’t an exceptional number of sheep there. It was cold, cloudy and intermittently wet. I drove the van to near where the track begins, and spent ages sorting out what I was going to wear and carry in the rain. It would be the new heavy duty leggings, new rain coat, fleece, down gilet, small rucksack with Tamron all-purpose lens, both extender lenses, mini flask and a snack. Slung from the harness would be the binoculars and 80D camera with 400 lens and rain cover. After about 15 minutes walking along the road I checked my online map and found I still had about the same distance to go. This was puzzling and when I came across a young woman exercising 3 dogs I asked about the track which was just after bridge over the river.

“The bridge is back that way” she said, but she must mean a different bridge, surely. I told her I had the route on my online maps, so set off walking again. I had done another 10 minutes when I saw a sign up ahead: a brown one. One of those heritage signs, and it said National Trust of Australia, the McQuarrie Mausoleum. I’d seen this sign before and wished I had photographed it to send to the relatives down under. With sinking heart I realised I had spent a good 20 minutes walking in the wrong direction! I did feel the need of some exercise, but this was ridiculous.  At least I could now photograph the sign. When I eventually got back to the van I didn’t stop but walked for about 2  miles along the shore of the loch, accompanied by sandpipers and  pied wagtails. A trio of slowly-walking bird watchers told me there was a White Tail in the mountains across the loch, but despite spending a good half hour gazing at the opposite shore, sipping coffee, eating my biscuit and noting the birdlife – which included nesting lapwing, courting mergansers  sandpipers, sand martins, swallows and a single grey lag goose swimming – I saw no eagle. The poor goose turned out to have a broken wing, so probably didn’t have long to live. 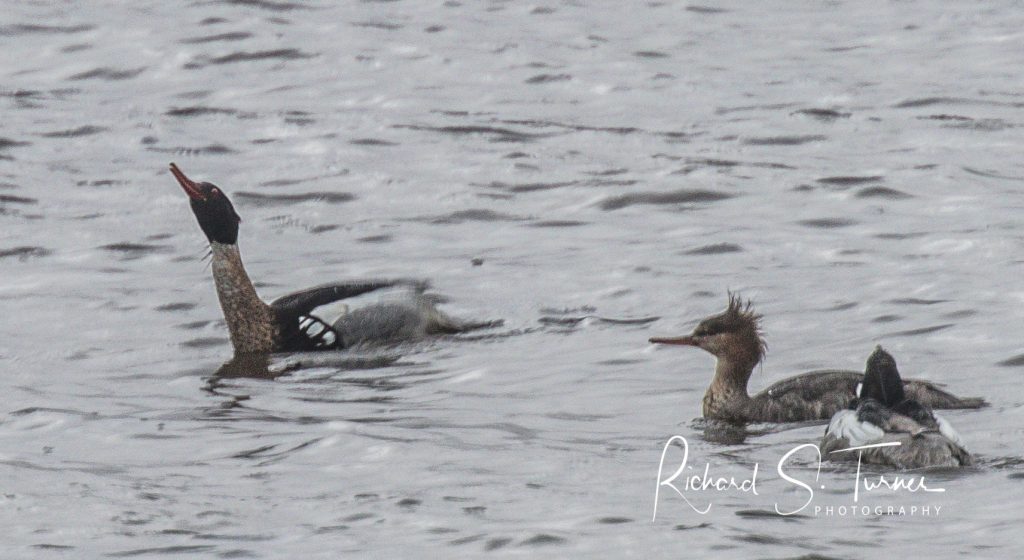 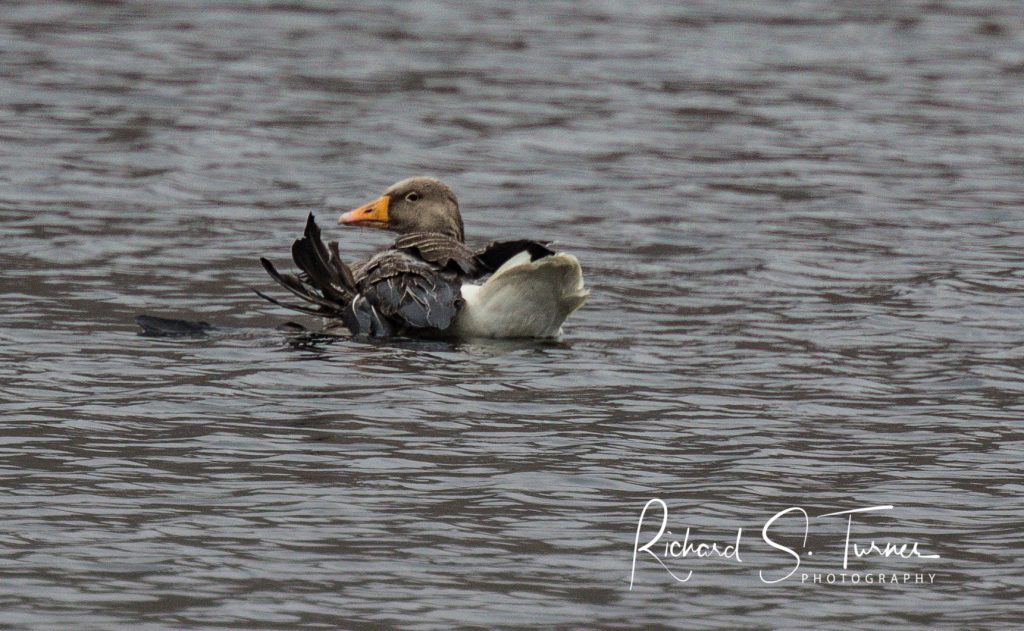 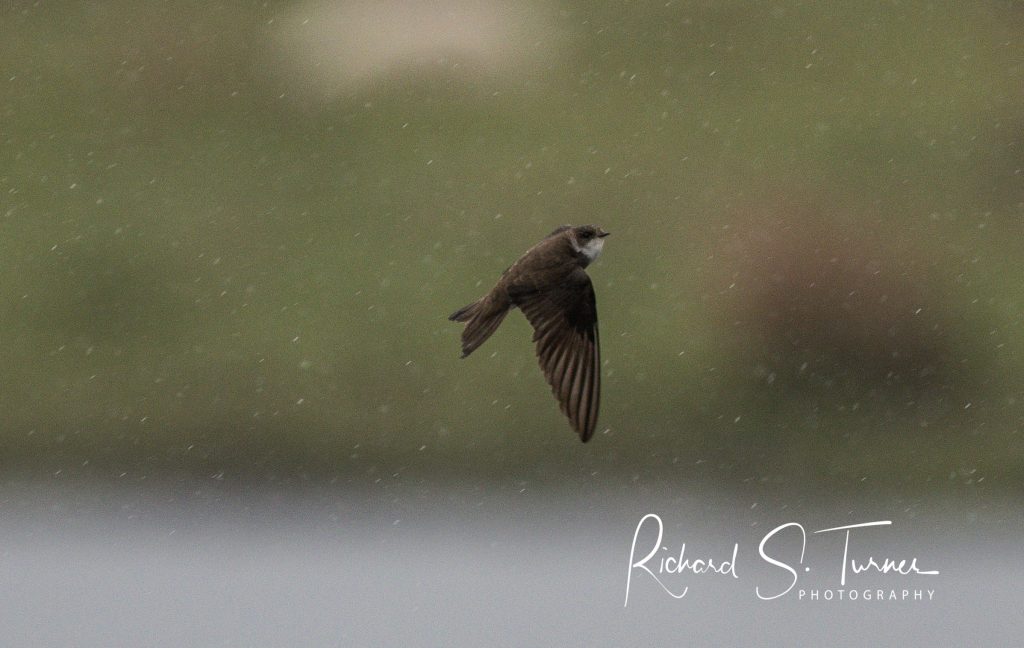 Back at the van it was nearly 3 o’clock. I was tired and dithered about the next walk. In the end decided to retrace the steps I took pedalling on the bike 4 years ago. Since then I had learnt, both from Ann and Stuart, and from the books I had read, that there were two possible Eagle sites at the head of Loch Spelve in the south of Mull.

I was feeling irritable when I got to the area, though the sun had come out and the fresh new leaves on the sparse oak trees clothing the valley looked wonderful. There was no-where to park close to where I wanted to walk, and it seemed there were no paths either. I stopped at the head of a short muddy track leading down behind an outcrop to the shore. Curious, I got out and walked down the track. It led to a slipway with a flat concrete area tucked in out of sight of the road. Could I drive down the muddy track? I decided that the mud was superficial and the base was firm so here I am, looking out over a classic bit of Mull scenery. 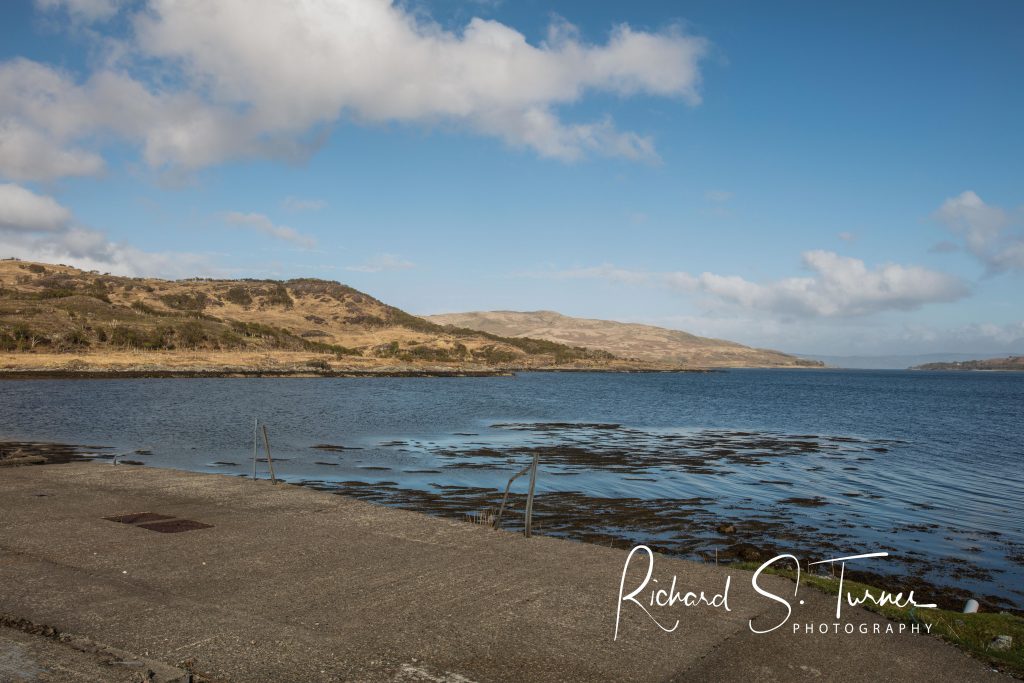 I turn the van to have the sliding door facing the water. The area where the Sea Eagles are supposed to be nesting is a wooded hillside on my left. Sitting on the step I scan the area with binoculars and almost immediately see two eagles flying towards me on the left. They are Golden Eagles – or are they? General rule: if it looks like an eagle but you are not sure, then it’s a buzzard! I set up the telescope to get a better view of the area. Within a few minutes I spot an unmistakeable White Tail flying across the water from the right. There is no way this bird can be a buzzard – the wings like 2 barn doors, the gleaming white tail, and the stumpy body. As soon as I take the scope off it I lose it, but before long I see a pair of them above a little promontory. A black lump at the top of a small dead tree moves. It’s a long way off, but certainly looks like an eagle so I hastily set up the camera with the x2 extender. I get some shots and notice it has bright blue wing tags so when I can get online I will be able to at least partially identify it. 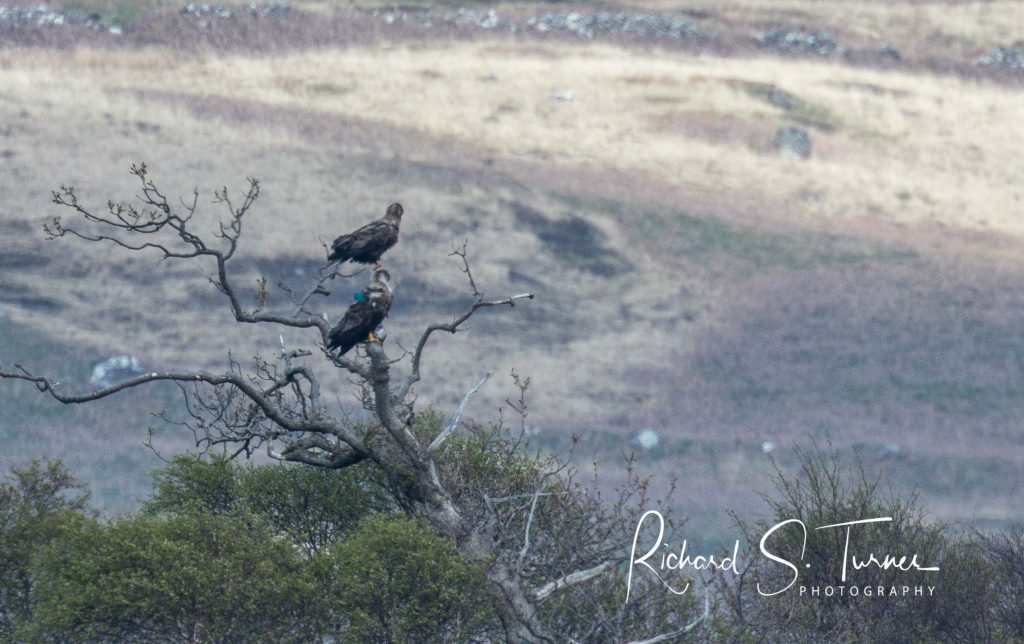 When the second bird joins it, things get altogether too exciting: they are flying! I track them, firing off shots whenever I seem to be in focus, but the autofocus doesn’t work well with the x2 extender, so it’s hit and miss.

When I see the frames on the computer I realise that the x2 was a fatal error. I cannot track a distant moving subject with the x2. It’s for stationary subjects only.

It was disappointing to have to delete what could have been some excellent flight pictures, but  I have a few reasonable ones and I’ve enjoyed the privilege of seeing one of Britain’s rarest and most charismatic birds in its natural setting. Checking distances on the map, it seems that with the kit I have, 500 metres is the limit for acceptable pictures. 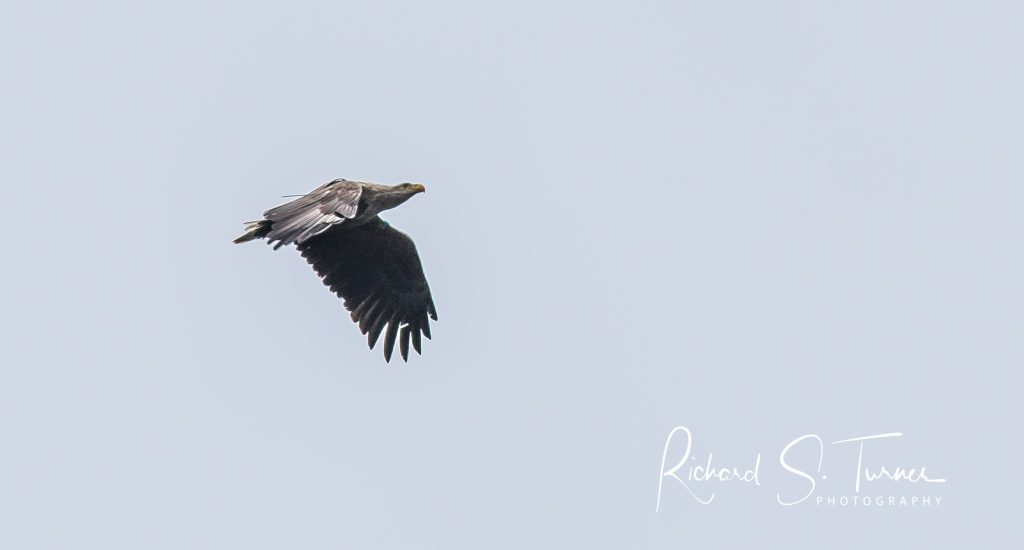 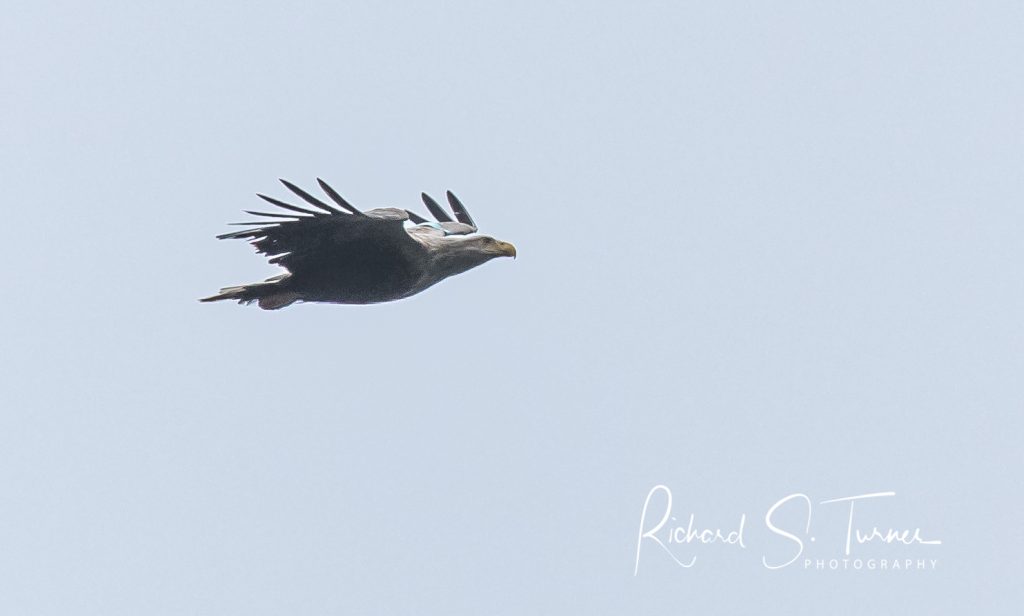