Skokholm is the smallest of the three islands off the coast of Pembrokeshire. There is another further out – Grassholm – which has no landing place, and is home to 40,000 Gannets.  I spent a few days on Skokholm 2 years  ago, so I know it’s not for the faint hearted, or for the internet dependent. It’s difficult to get to, the rooms are unheated, power is only available when there has been some sun – and this is Wales we are talking about. Worst of all we men have to sit down to have a pee – on a composting toilet which separates the urine from the crap!

Actually it’s magic,  but with only an intermittent phone signal, keeping a daily blog is too difficult, so now that I am back I will post my thoughts and pictures in roughly chronological order and in three episodes. Here’s the first:

We are an odd looking bunch. I know full well that my first impressions will change – almost certainly for the better, but as I look round the boat, heaving and swaying in the moderate wind as it lurches towards the island, my heart sinks. For one thing there are too many of us for comfort, and I’m always uncomfortable in groups of people who are like me, especially when the common factor is age. I feel I don’t belong with these old people, even though I am one, and I suspect many of us feel the same. We become invisible as we age, no longer relevant to the young, and so ignored. Life’s great paradox: we all want to become old but nobody wants to be old. 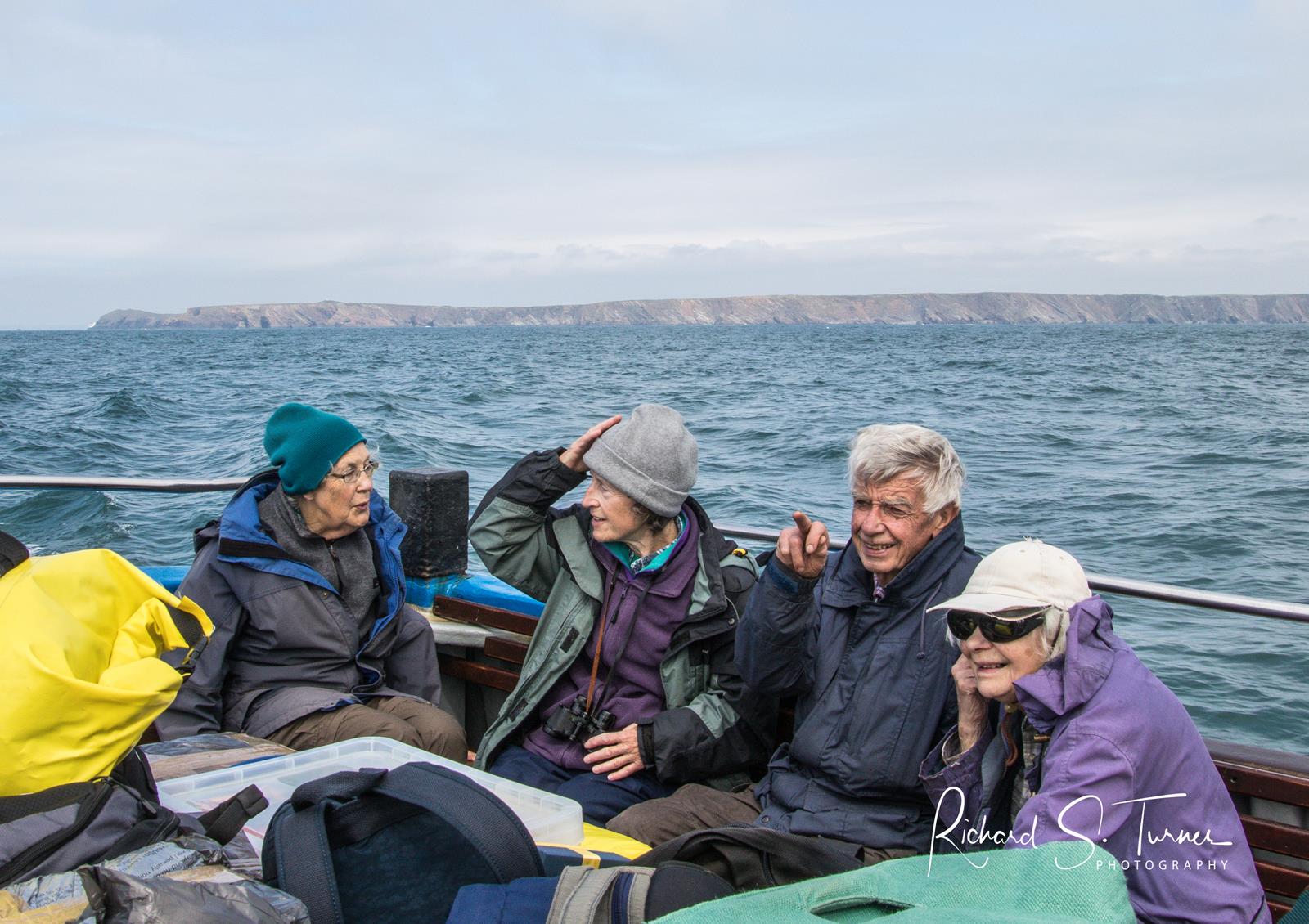 Unusually, there are more women than men, and all seem to look a bit like retired academics! From the left they are Liz, Dorothea, John and Norma. There is a younger couple: Dave who is friendly and chatty and Mo who looks cross and says little. Here they are later searching for an elusive Wryneck: 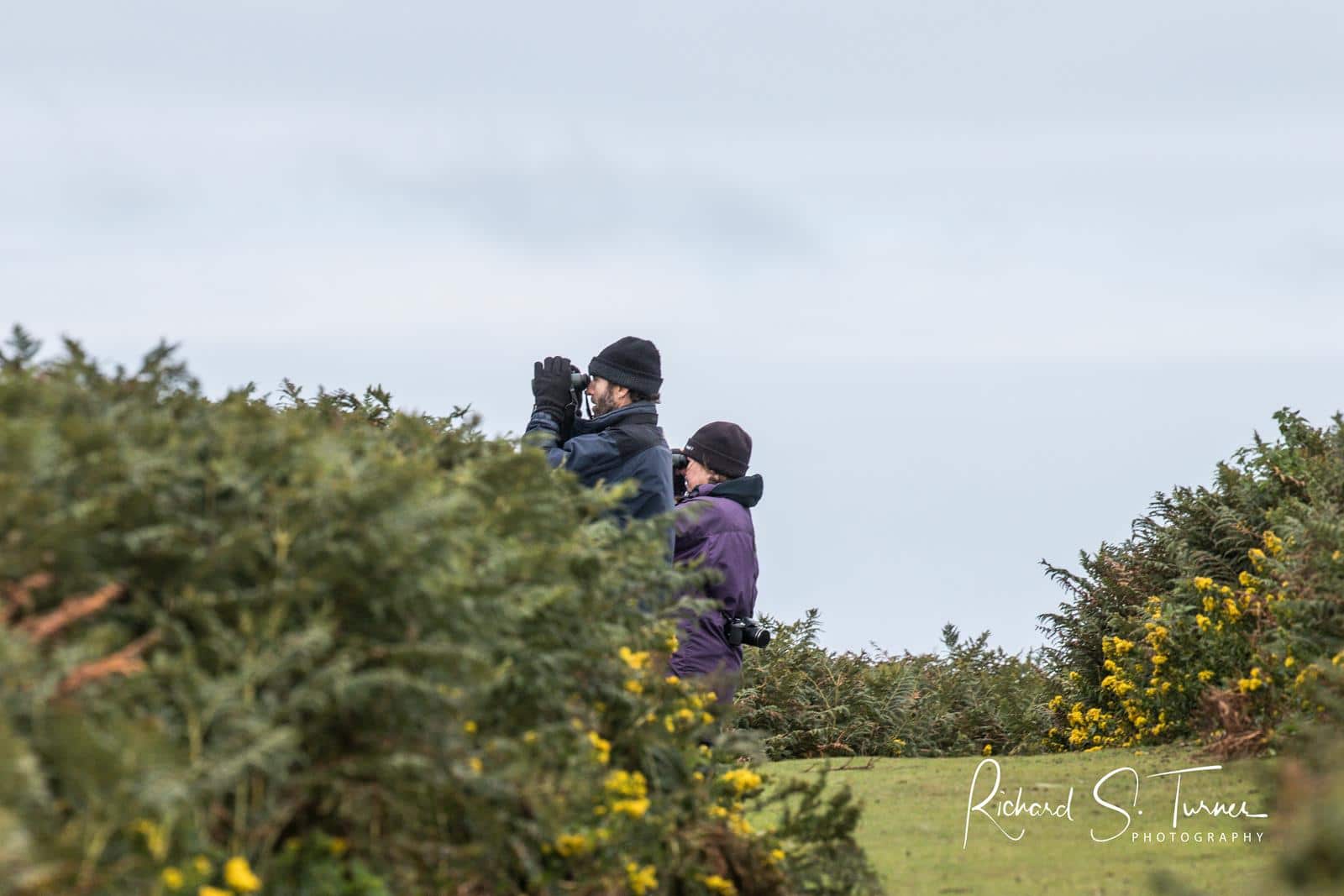 Howard, the second one I met as we worked together hauling luggage up and down the path to the boat, is grizzled and tough looking and at first I thought he was one of the boat crew. This is him with Jessica (not her real name) of whom more later. 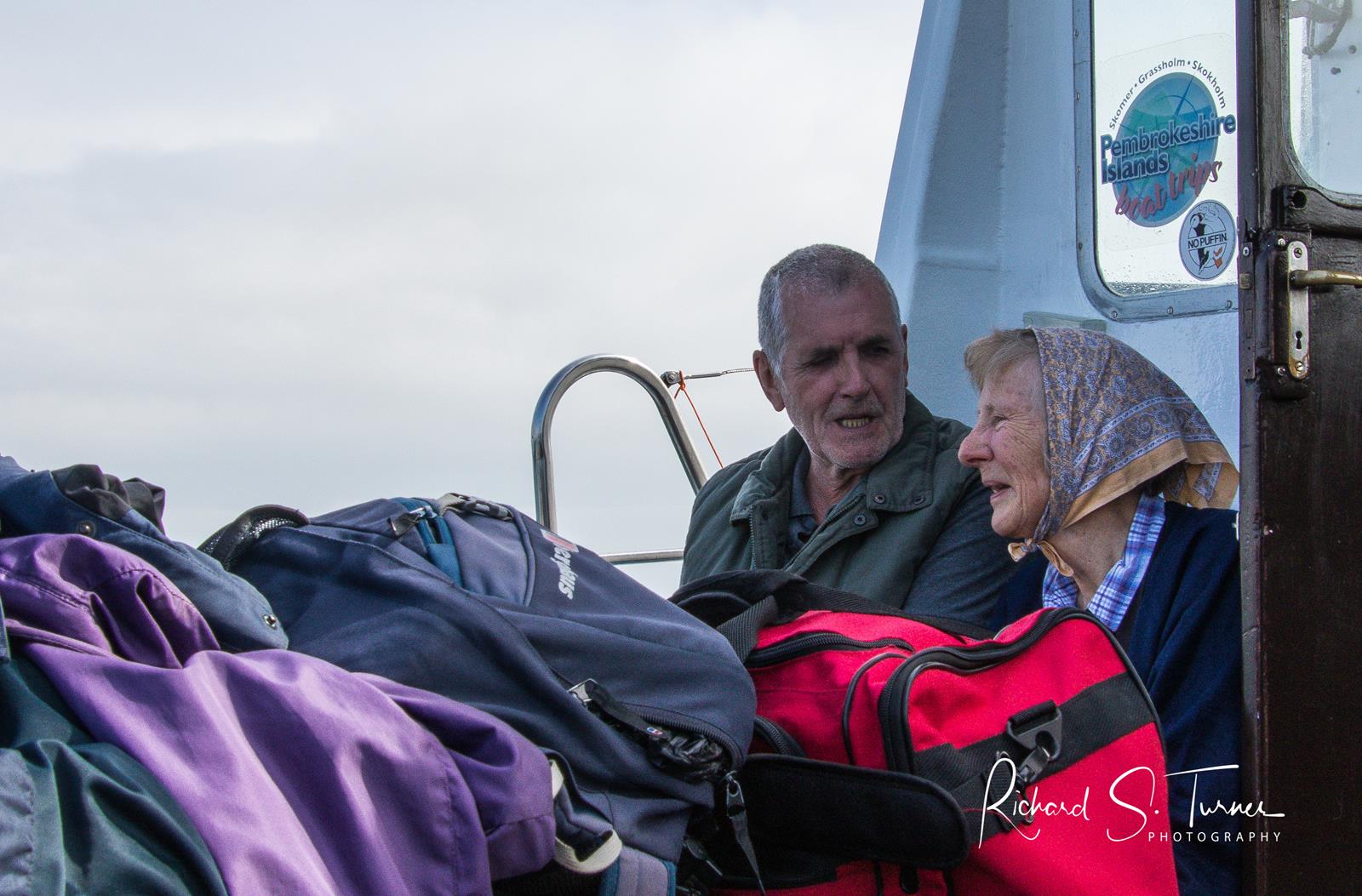 Before we embarked I caught this blissed-out seal pup in the harbour at Martin’s Haven. (for the word freaks I apologise for the tautology.) 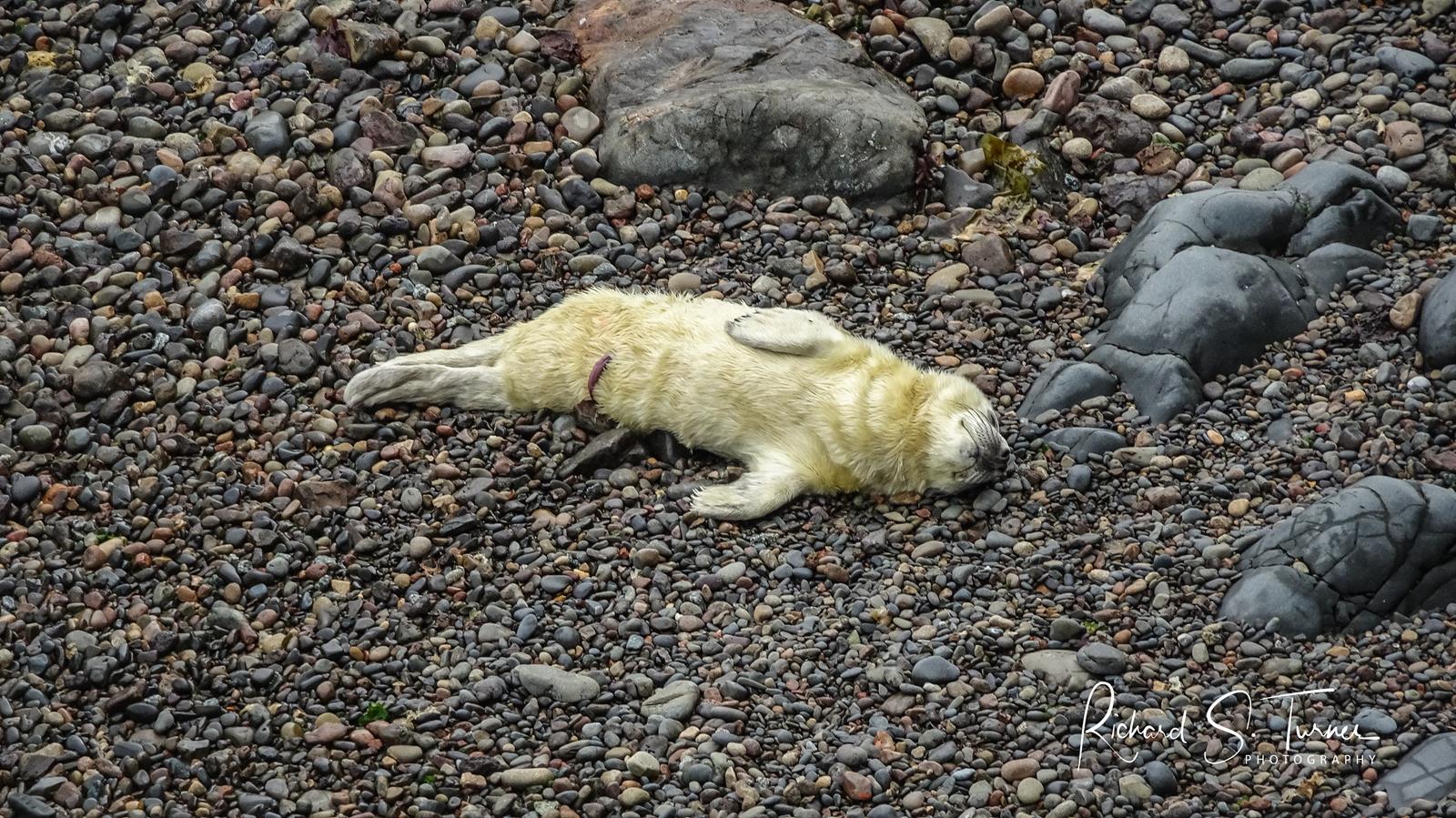 Once all the huge pile of luggage is on shore and transported up to the farm buildings by dumper truck, we gather at the outside table sheltered by the group of old buildings. There we are given cups of tea and wait for Richard, the warden, to give his welcome talk. I am opposite him, but it’s a big table and I miss most of what he said. Slowly but surely I feel my gut reacting. It’s my old enemy, the malign mini-brain in my gut, also known as Irritable Bowel Syndrome, which tells me when it thinks I should be stressed. Once set in, the ache in my belly is hard to shift. I take a tablet which is supposed to calm it down but it’s there with me for the rest of the day. I won’t let it spoil my afternoon though, and get some nice pictures of a water rail from one of the micro-hides placed round the island. 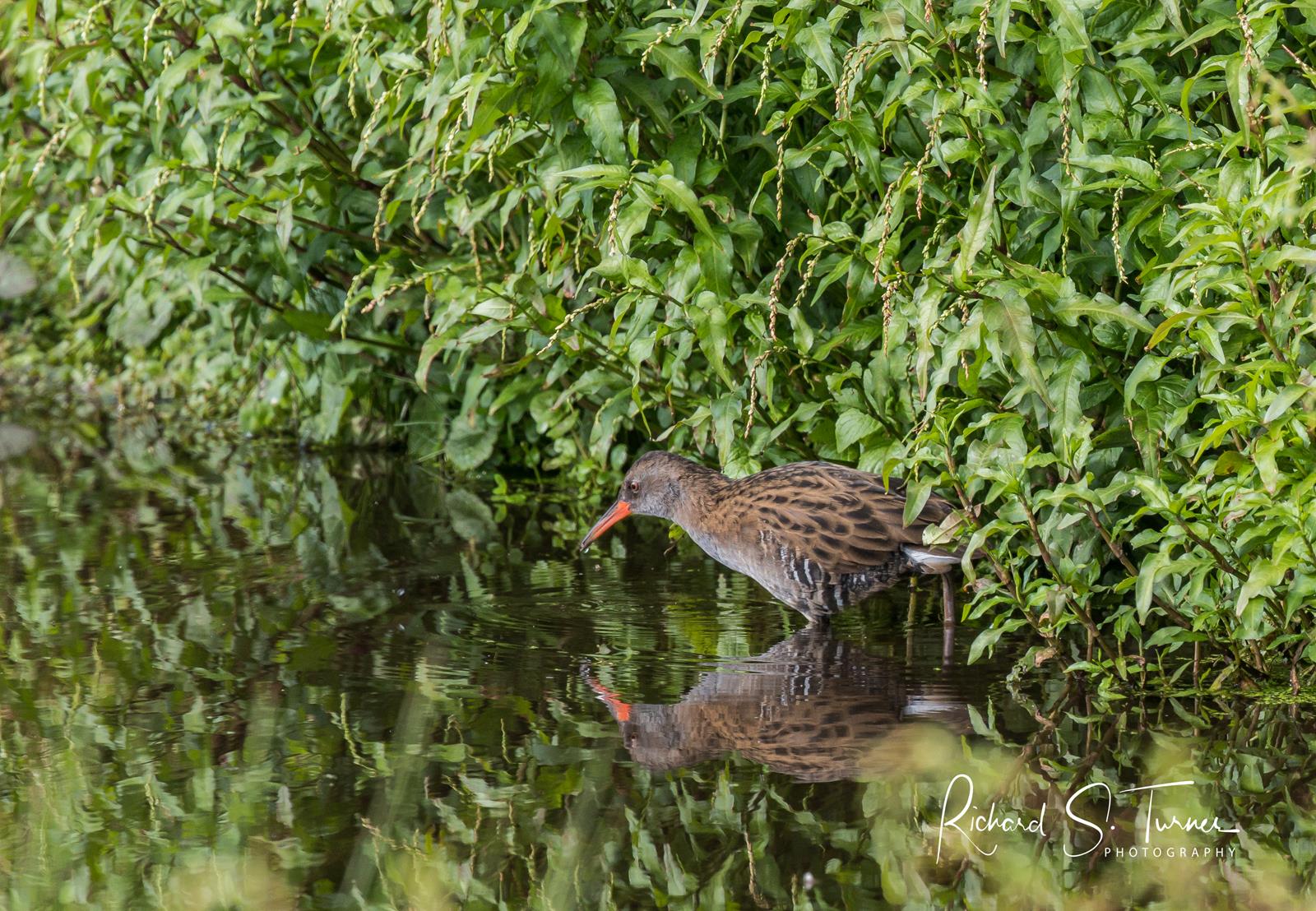 The sun comes out and there are lots of Red Admiral and Painted Lady butterflies patrolling the paths. 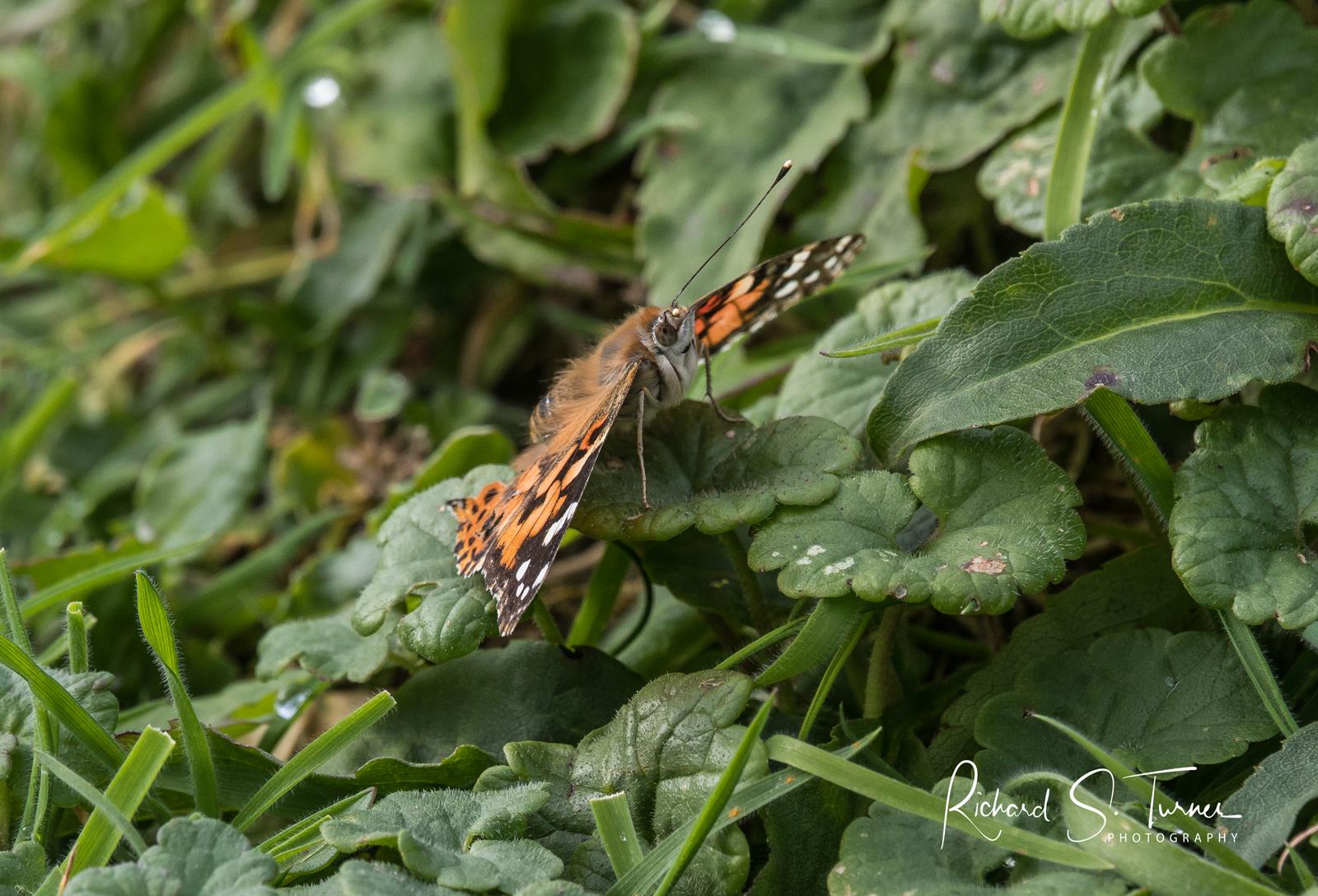 I was looking forward to the evening meeting where we all report what we have seen during the day. The common room is in the cottage where my bedroom is. Come nine o’clock, the wood stove is lit and, in what must seem like a weird ritual to normal people, we all sit round on sofas and chairs waiting for the boss. Richard and Giselle are joint Wardens, but it’s Richard who keeps the records and writes the Skokholm Blog. He goes through a list of the main species of birds seen plus a short list of anything else that moves –  animals, insects, seals, slow worms.  I keep records, 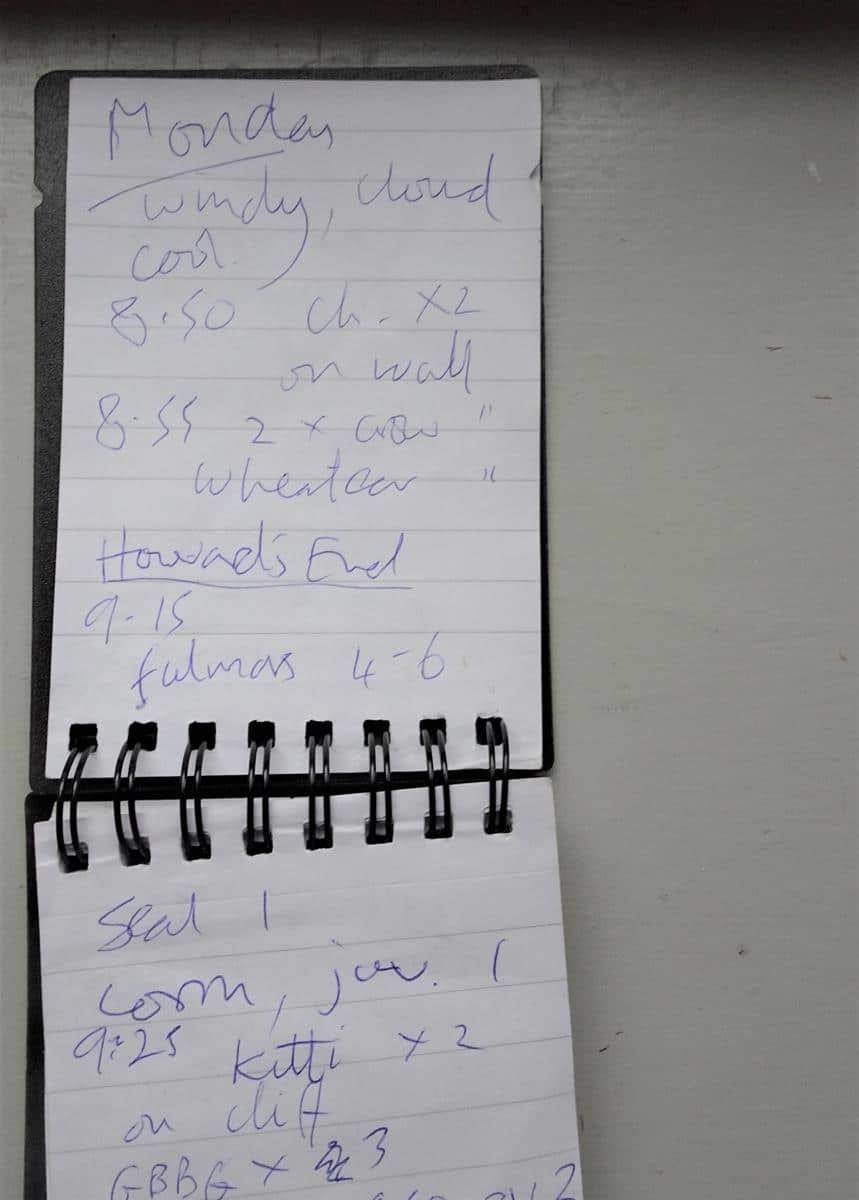 and try to join in, but it’s torment. I feel like an alien trying to understand what is being talked about. The gut gets worse.

22:00 The meeting is over, but it now it seems most of them are going out in the dark to look for storm petrels – a charming little bird seldom seen on land or in daylight. The group of ringers are bustling about; some carrying chairs, another pushing a wheel-barrow with what looks like a guitar amplifier amongst other bits of kit. We set off like a group of miners each with our head-torch, until we get to some sort of stone shelter and are told to sit there and wait.  The birds will be brought to us. Sit! Scrambling helplessly around are a few of the thousands of Manx Shearwaters to fledge on the island. They have to shed some weight and gain some muscle before they can fly to their real home – the open sea. 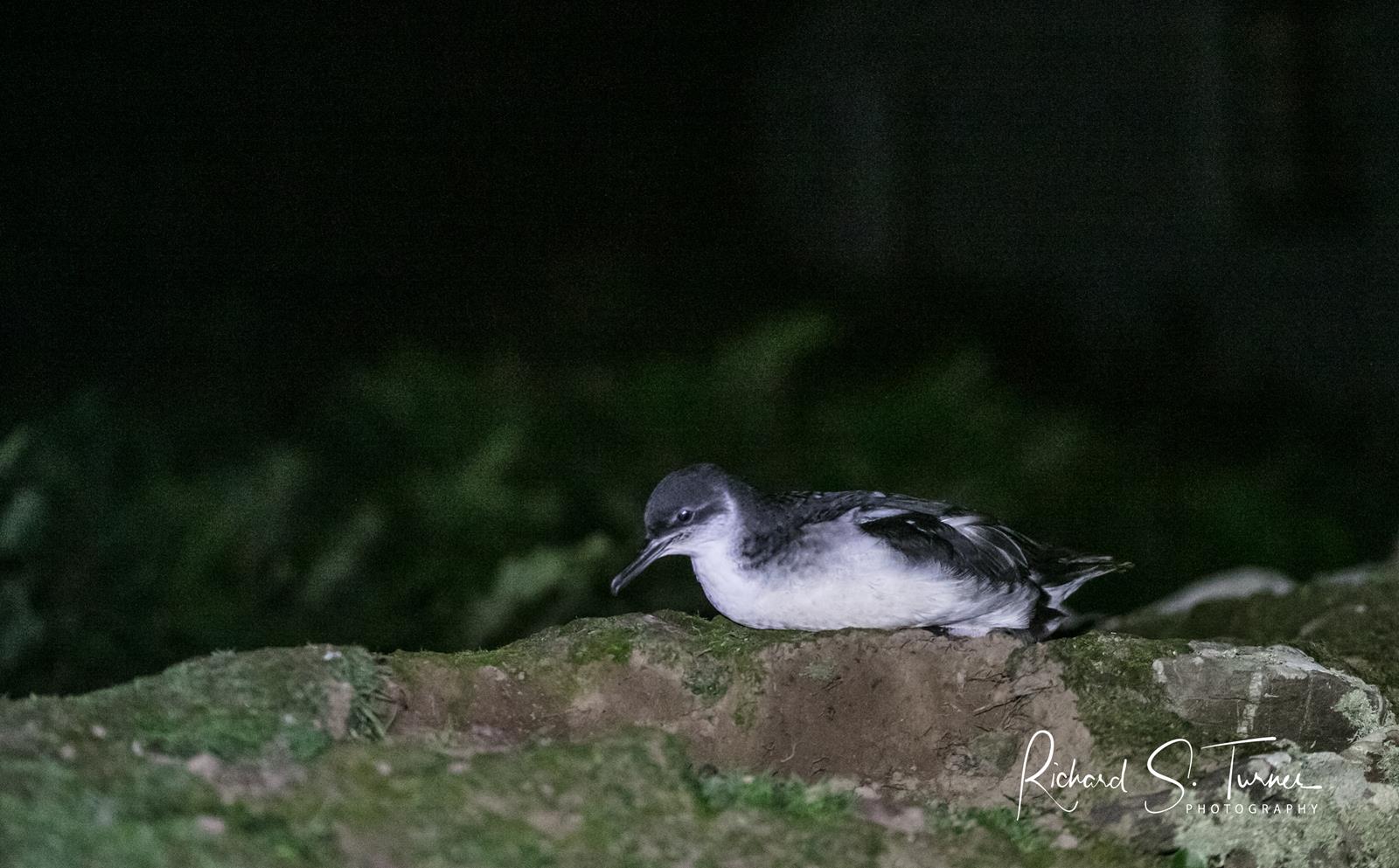 We are asked to turn our torches off and the darkness wraps itself round us, with only the faint glow from the mainland showing the paler sea. The only sound is the eerie calls of young “Manxies” on their first flights, passing like waifs above us, showing briefly in the torchlight and then being lost in the blackness.

It’s wonderful, magical – and so it was until the noise started. It’s hard to describe the recorded sounds made by storm petrels when looped and amplified to the volume of a rail station announcement https://sounds.bl.uk/Environment/British-wildlife-recordings/022M-W1CDR0001409-0600V0 – grinding, screeching, wailing, croaking, barking, over and over again. At first it was fun in an outlandish way, but it went on and on, while we waited patiently in the dark. Forty-five minutes later I’d had enough and set off back, gut rumbling.

At least I thought I had set off back, but quite soon my torch showed unfamiliar rock formations. I was lost. I looked all round – nothing but darkness. Stop. Don’t panic. There’s a faint glow from the mainland. That’s east, and I need to move northwards to find the farm. I can see another light moving around, but it’s not in the right direction – I think. After 5 minutes I find another track going in what seems like the right direction, and five minutes later I see the outline of a building. I’m back, gut still bad but glad to be in bed, safe.

2 Responses to Skokholm as in Stoke ’em (Part 1)