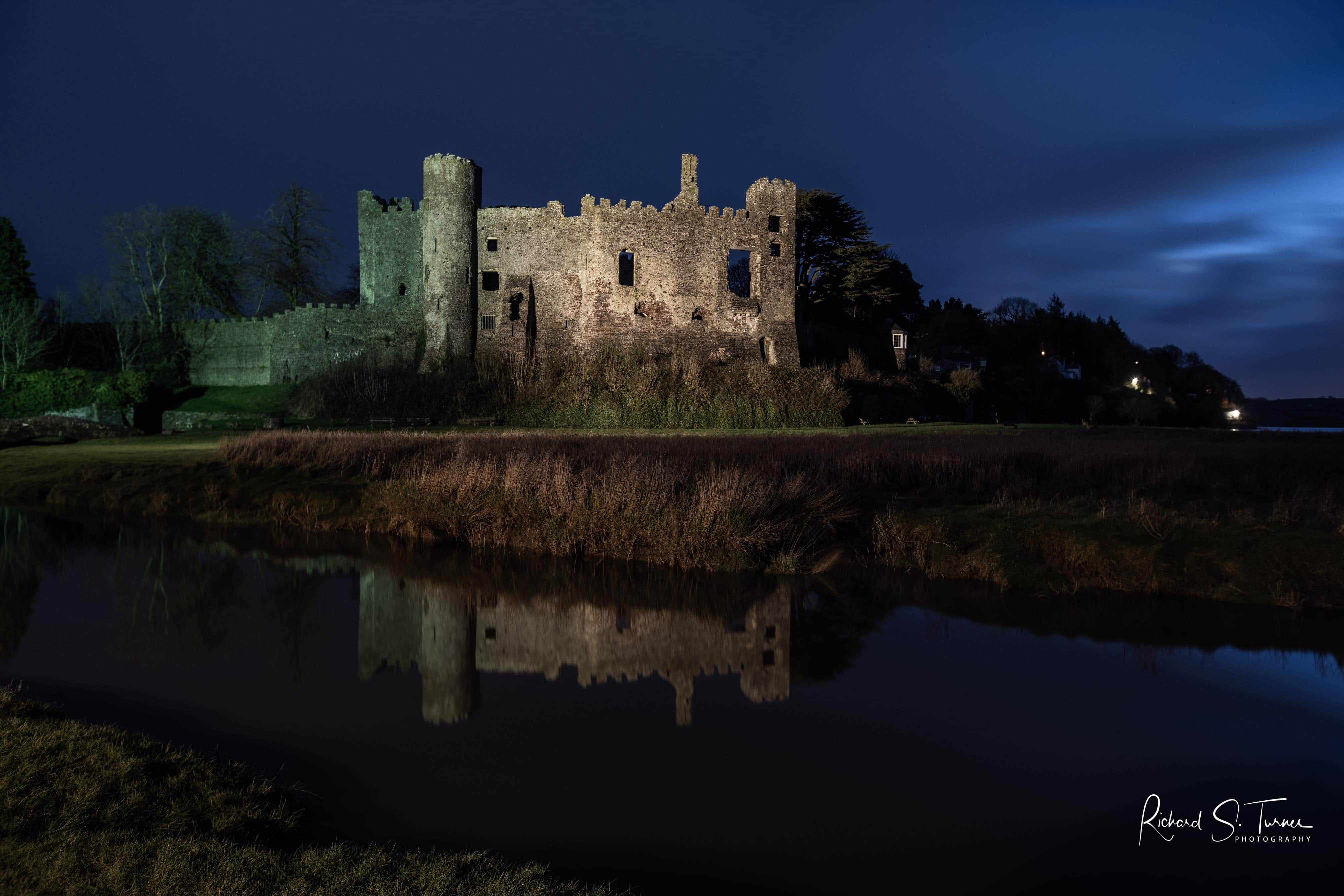 February 11, 6:15 am; a faint glow in the eastern sky the other side of the estuary, but the sky is blue-black, dark clouds and a few faint stars. To my left the town rises in a dark mass behind the castle its shape dotted with lights glowing faintly. The Castle is a huge presence, towering above the estuary. It is lit from two lamps above me in the car park. One is slightly green, the other slightly brown.

Today and tomorrow are Spring Tides, the highest of the winter, and in an hour or two the water will cover the car park and seep into the town. I set up the tripod and camera: Canon full-frame 5D4 with 16-35 f2.8 wide angle lens, 10 second delay on the shutter to still any movement, and the slowest shutter speed –  30 seconds. I press the button and the ten second delay counts down. The a red light comes on as the shutter is opened. Half a minute later the picture is done and it looks good, but the tide is still out and that shimmering sheet of water I am hoping for seems a long way off.

I was here yesterday late afternoon when the tide was right out, but there were Black Headed and Herring Gulls, Redshank, Curlew and 20 or 30 bustling Teal who suddenly took to the wing in a group. My skills at catching birds in flight are rusty from dreary months of rain and sickness, but I get a few good shots. What a joy to be doing what feels like the best thing in my narrow life. 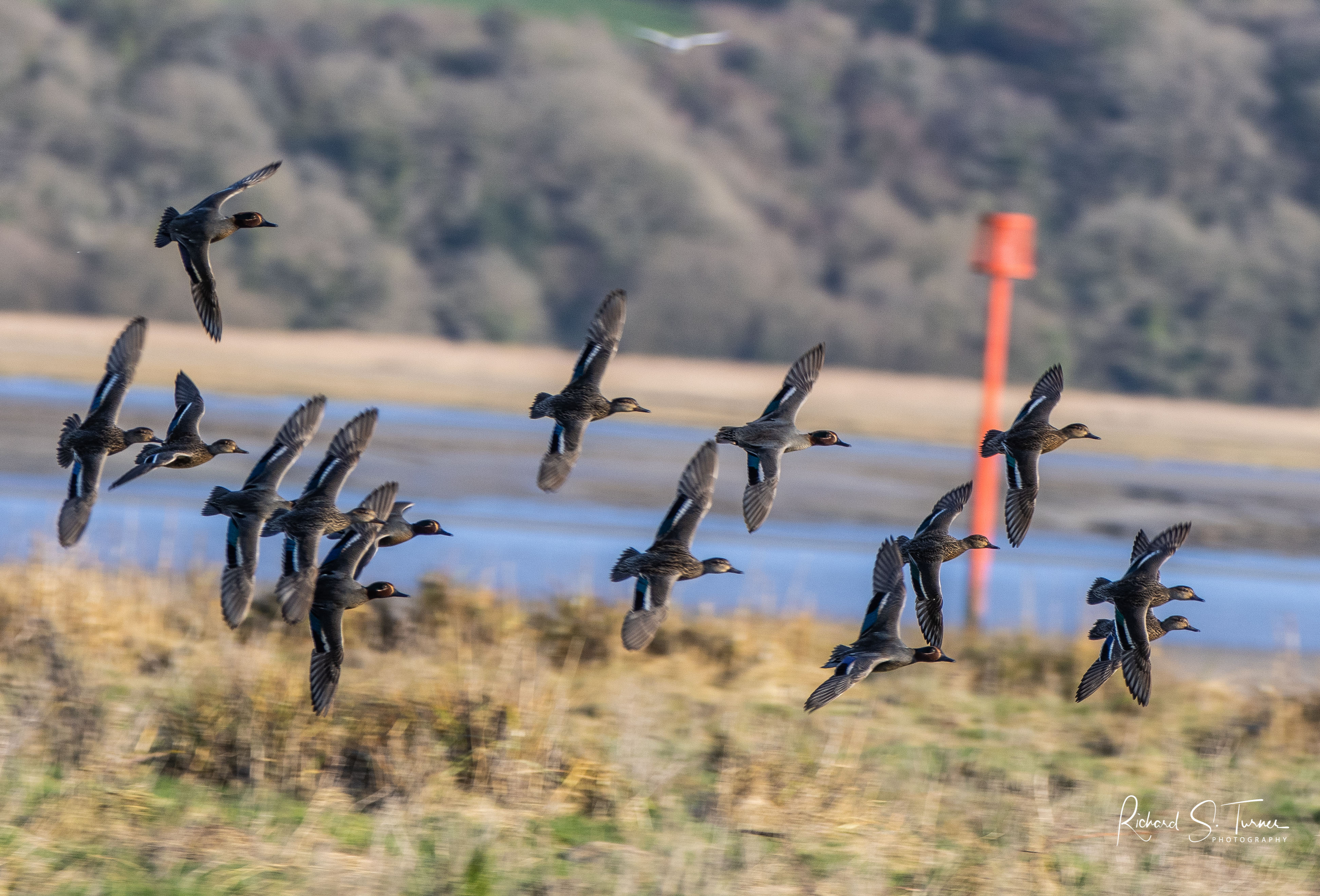 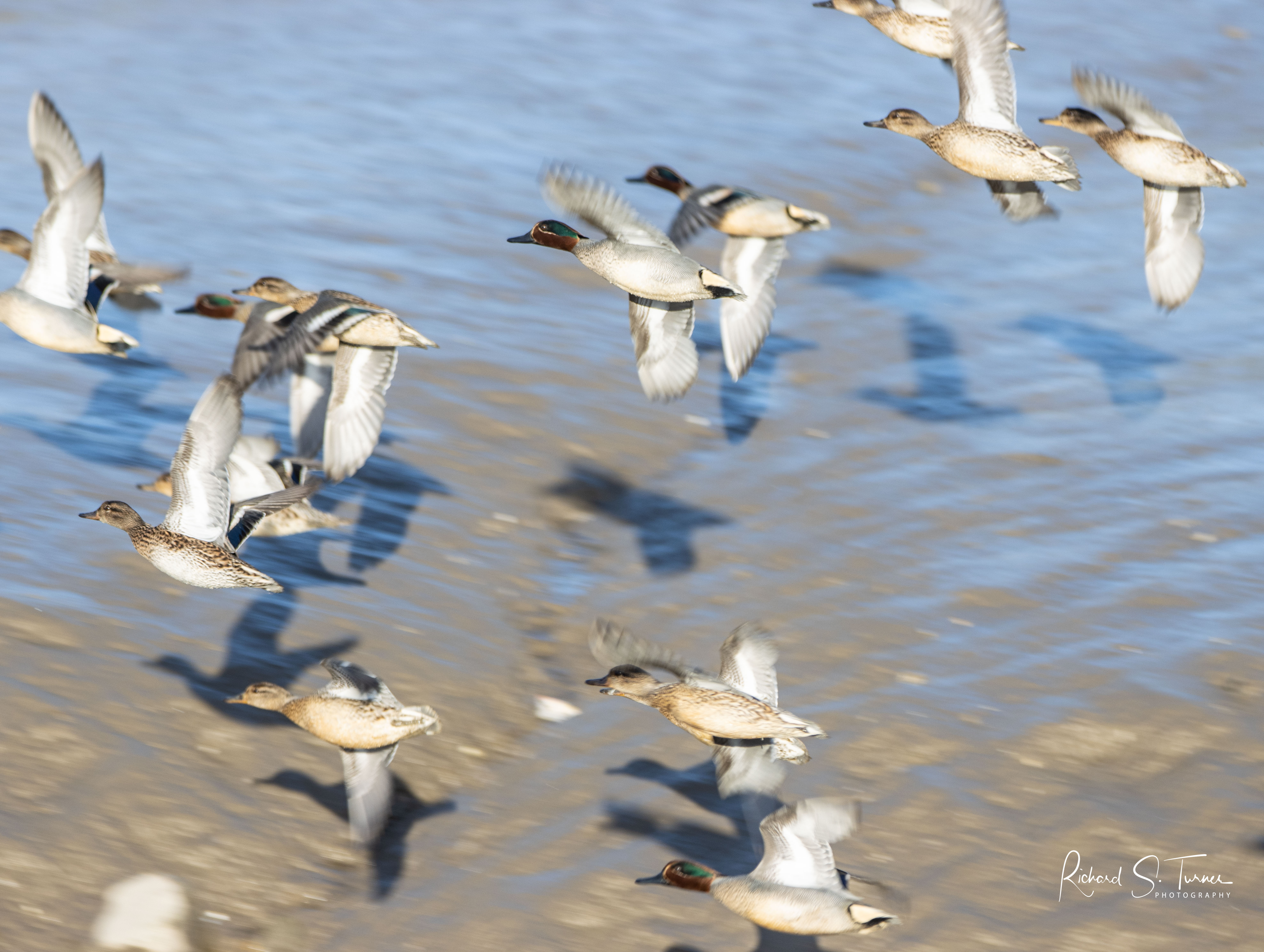 I was here too in January 3 years ago doing much the same, but I got the exposures wrong and always hoped to come back. It’s a difficult window to catch. The tide will be highest for only 2 or 3 days, and I need it to be near its peak at dawn. Not only that but it has to be clear and dry, and this winter has been exceptionally wet. Every day in the week before the event I check the forecast. A huge storm crashes into northern Europe at the week end, but a brief ridge of high pressure is forecast for exactly the two days I need, and here I am, nervous, cold and excited.

Slowly the light builds and the first birds begin to call: not the blackbirds and robins of the inlands but the evocative calls of Redshanks and Gulls and Curlews. The little stream which half an hour ago was running swiftly towards the sea has stopped moving. The water is rising. A few snipe and Redshanks are desperately trying to find some dry ground where they can hide, but most of the grass and rush is under water now. 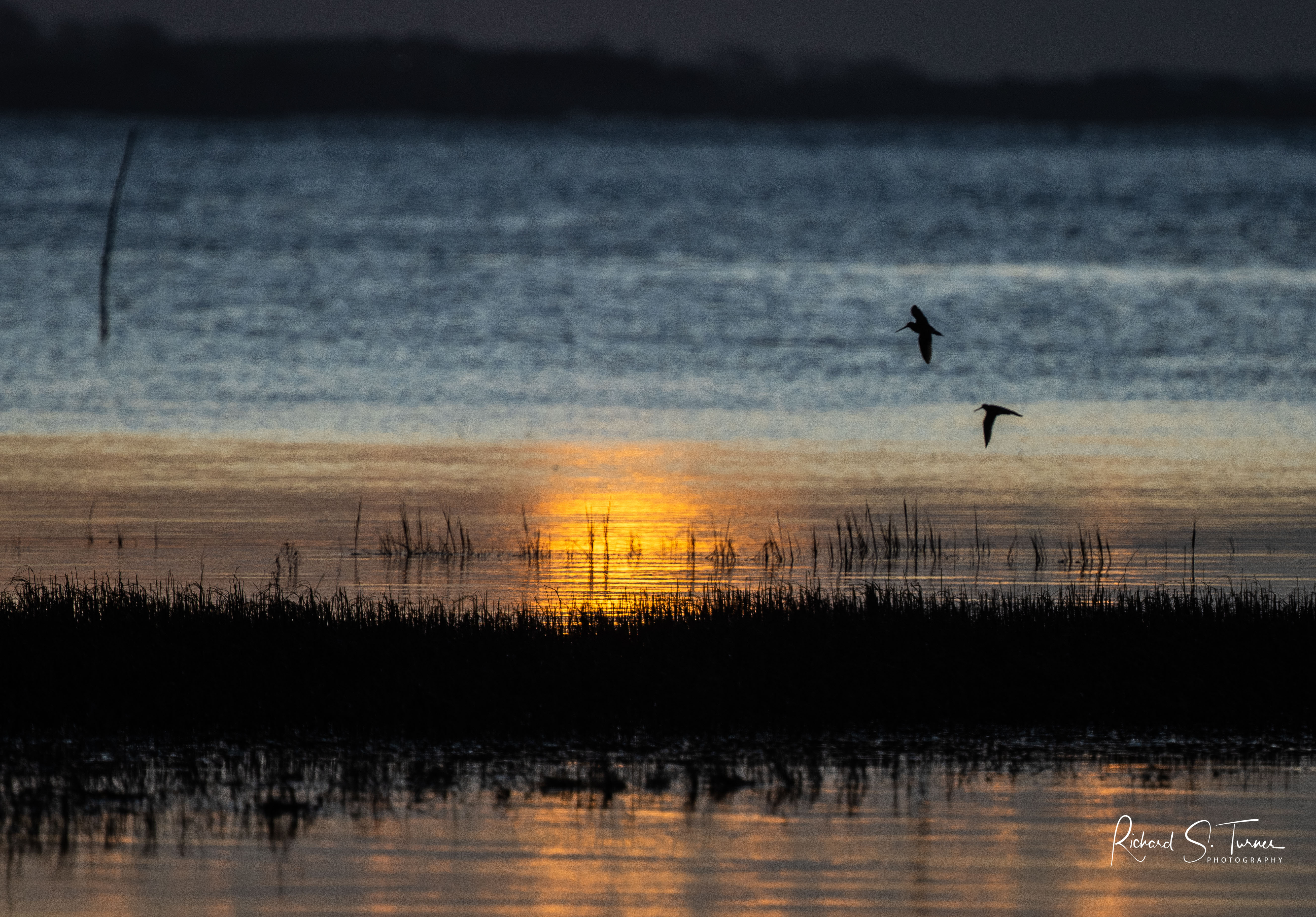 I take more long exposure shots, but the light is increasing and the birds are moving. Thirty seconds drops to 15 and soon I will no longer need the 10 second delay. Now the water’s getting close to where I’m parked so I move the van to the highest point in the car park. I’ve never seen tide come in so quickly, and it’s still not fully daylight. I walk further down the track away from the car park to catch the parties of teal busy amongst the rapidly disappearing saltmarsh grasses. 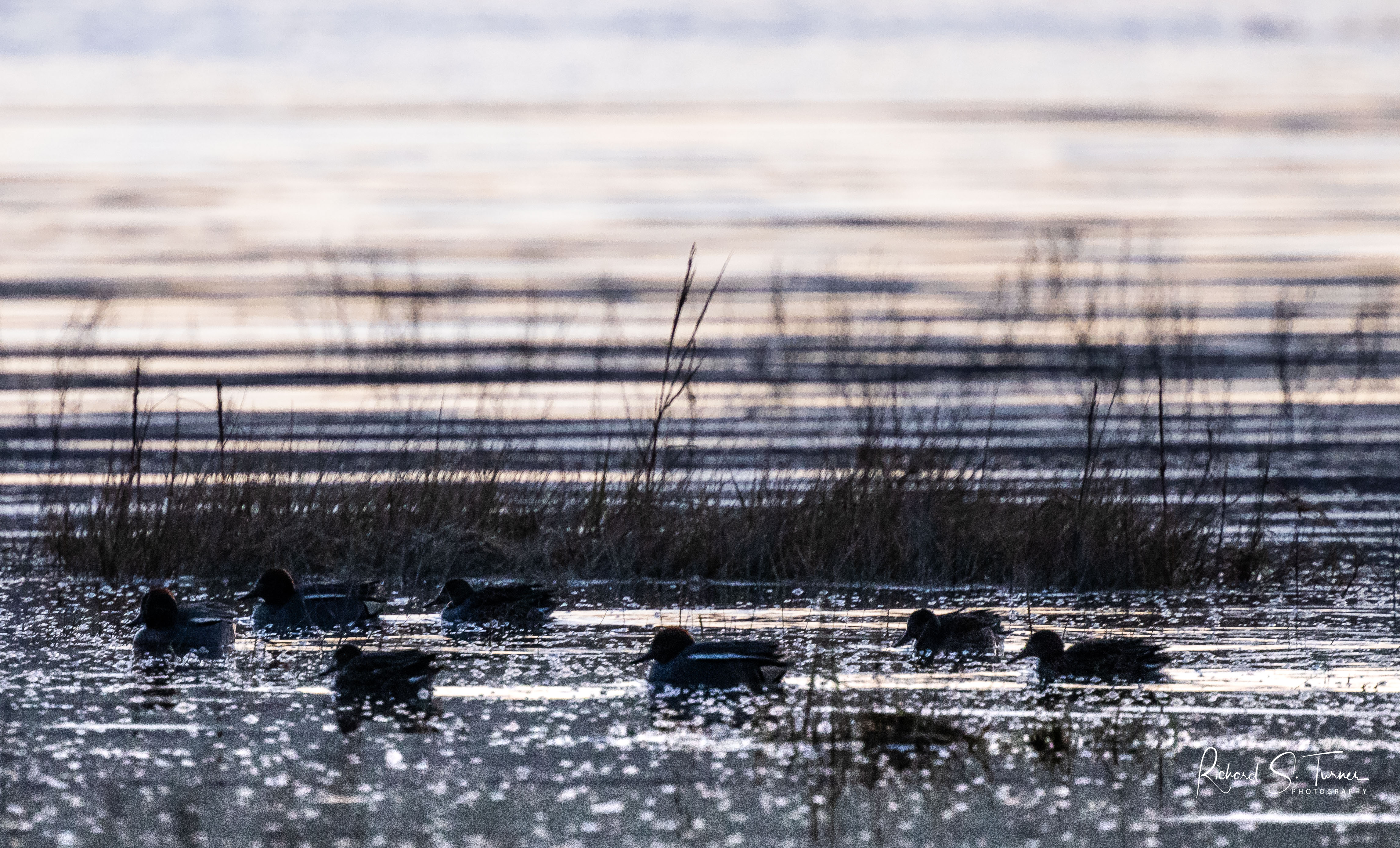 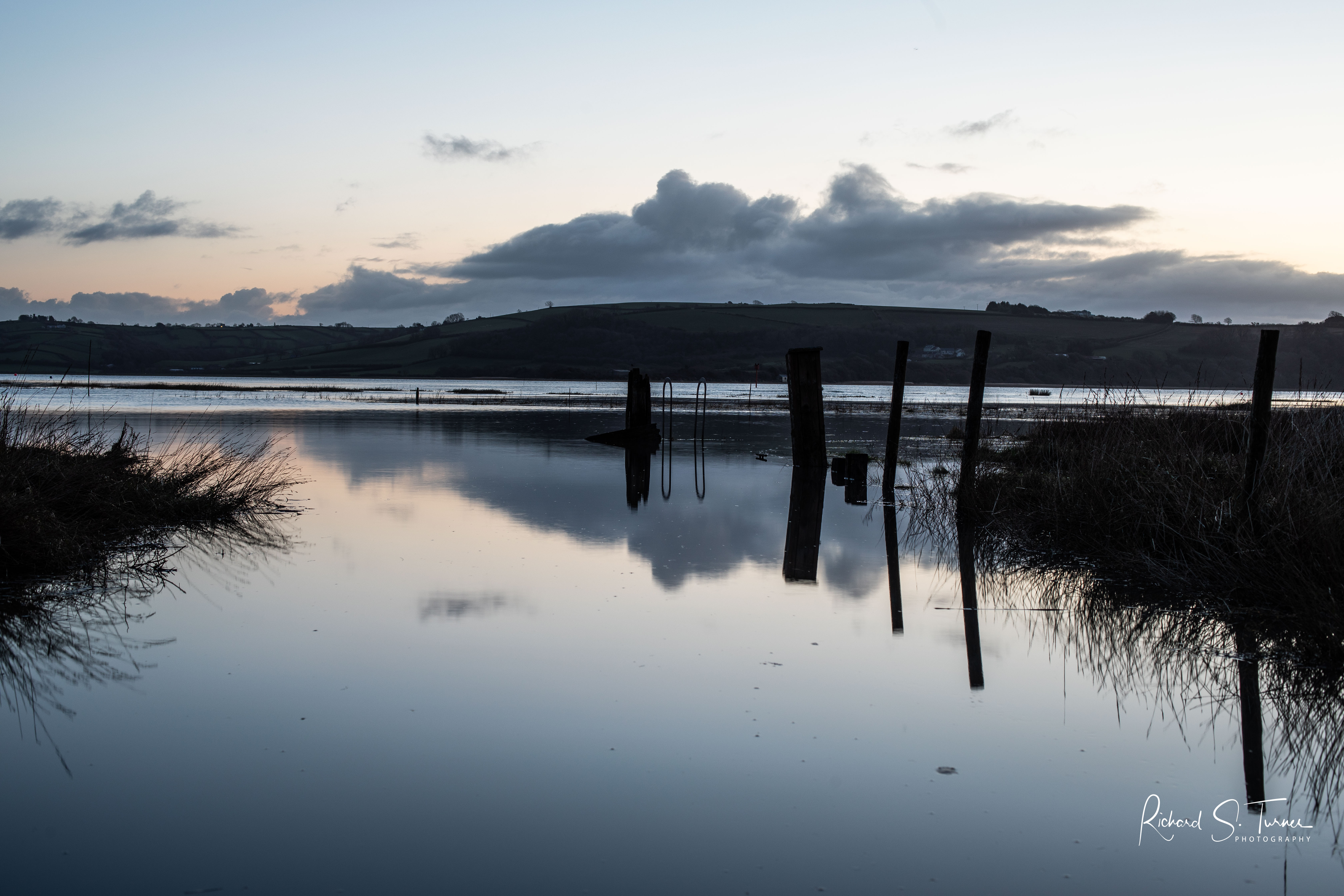 I’m lost in the joy of picture creation until I glance to my left and see part of the track already under water. If I don’t move quickly I’ll be cut off. I manage to wade back to the edge of the car park, but can’t get round the corner of one of the buildings. Fortunately there is a footpath between two houses leading up to the road from where I can get round to the van. A few minutes later and I would have had to take a long detour through the woods to get back to the town. With a sigh of relief I set up in a little raised park and watch a wooden bench disappearing – you can just see the top of it between the posts on the right. 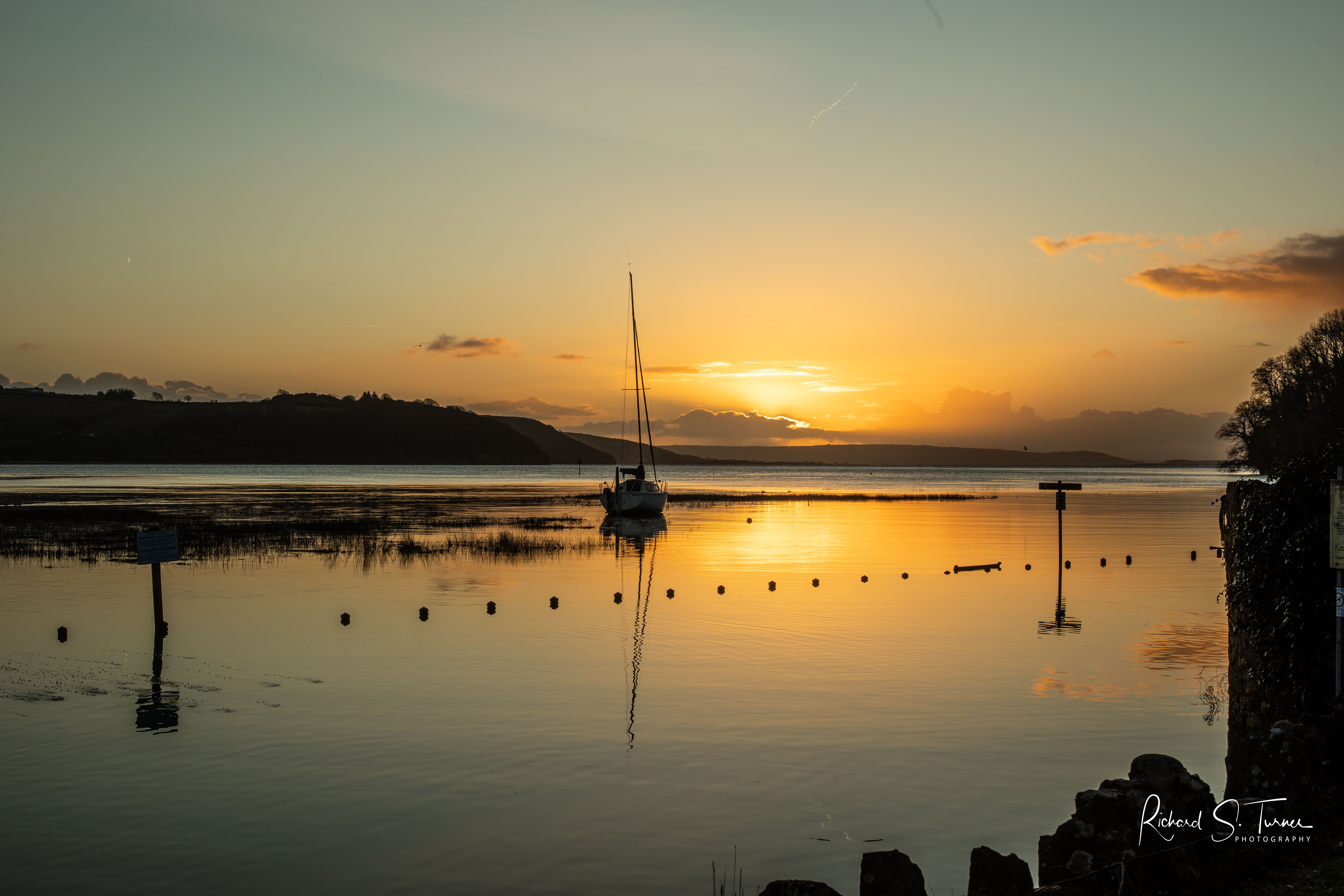 Now it’s full daylight and time to leave, but I snatch one more picture of the castle with its new moat: 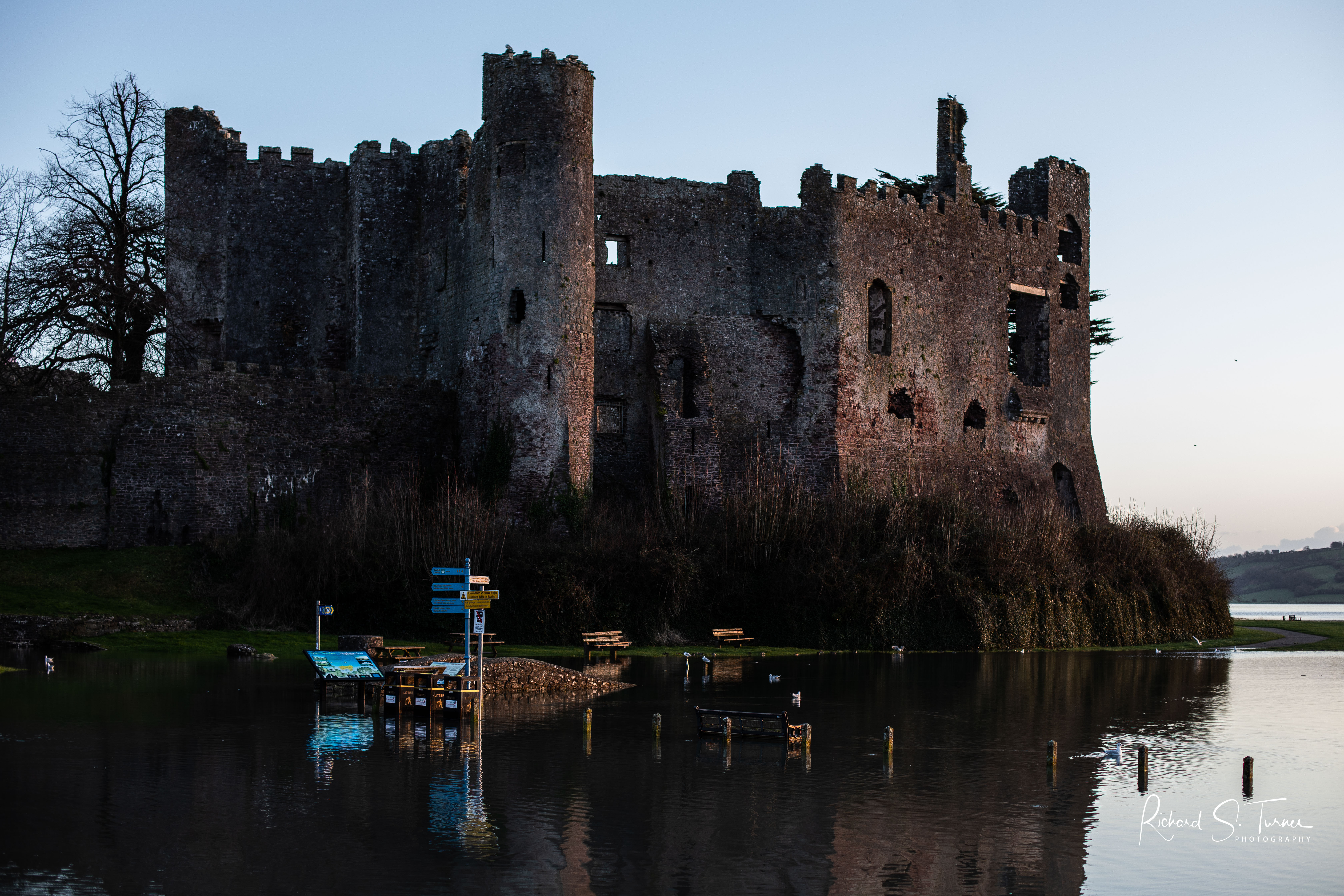 My plan was to spend most of the day at Ginst Point, a bleak and wonderful patch of wilderness which is part of the Pendine military area. The one variable on this trip I didn’t check was the times when the access road is closed, and my luck ran out. It was closed until Saturday, but the rain was due to return tomorrow. I decided to make use of the last fine day for a while to explore a bit of the Cleddau estuary up from Pembroke dock. On the way I stopped at Pendine. It’s an ugly little holiday village with a rich history and today it was being pounded by the high tide. It was a good opportunity to try out my new 50mm f1.4 lens and it did not disappoint: 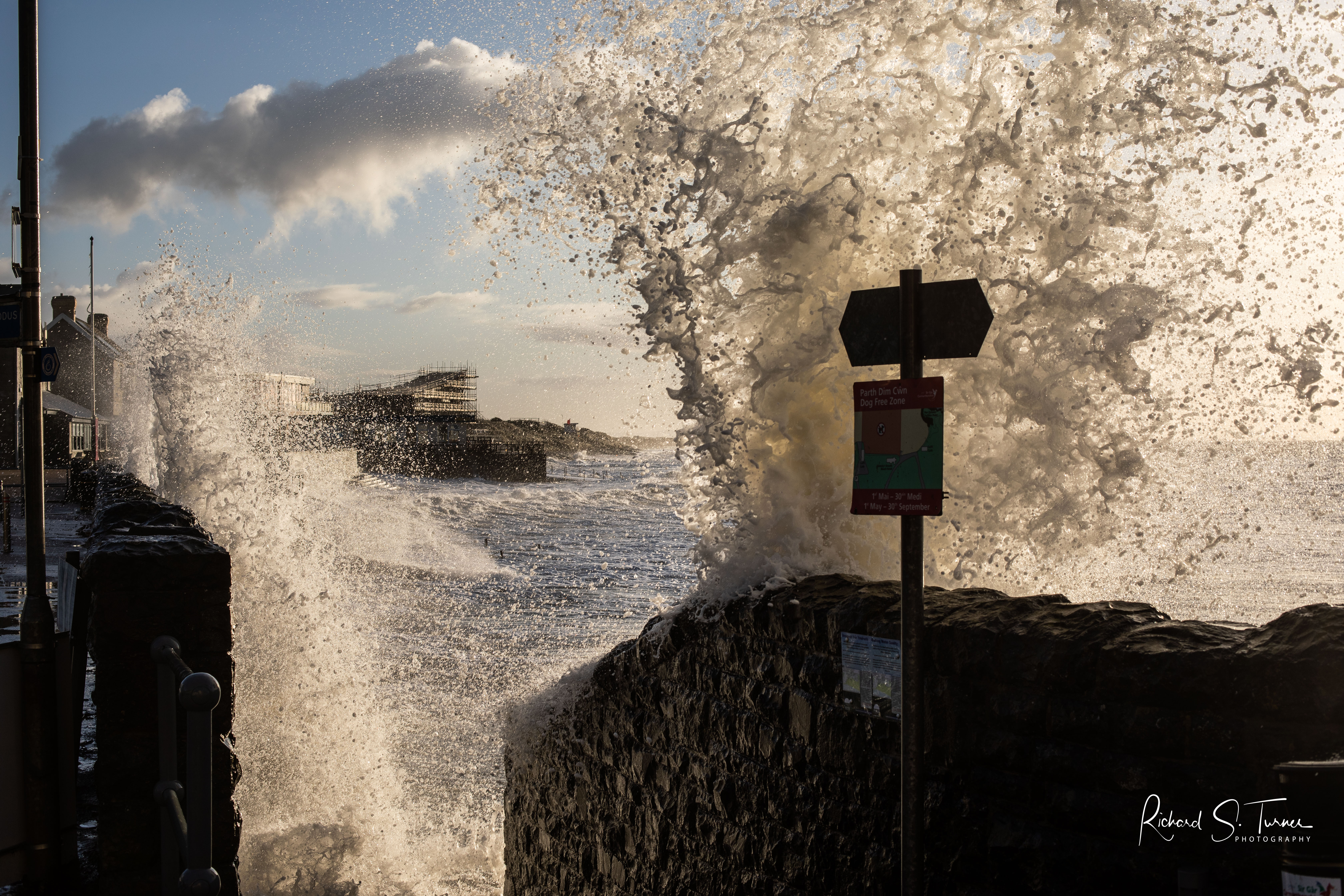 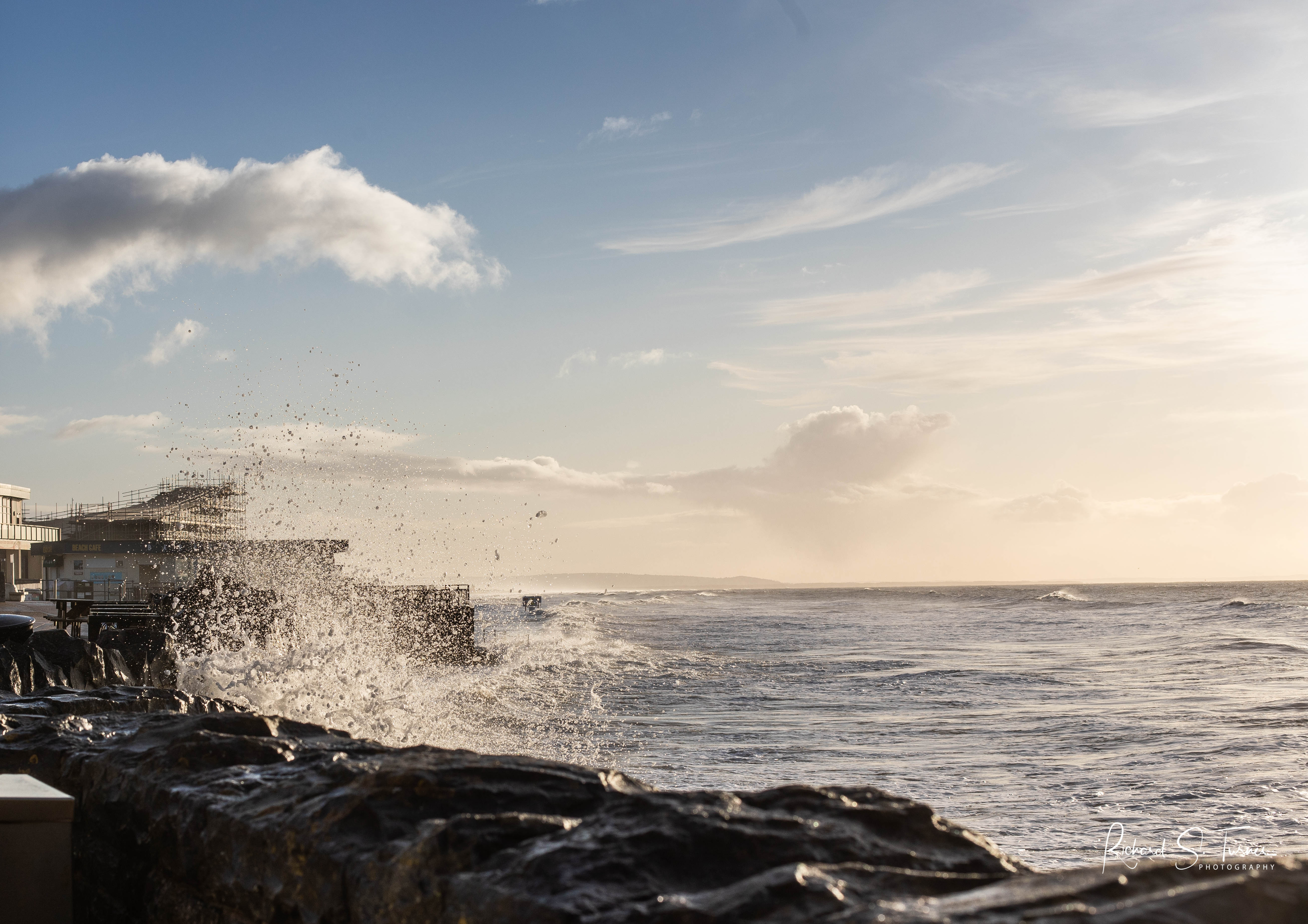 7 Responses to Spring Tide at Laugharne