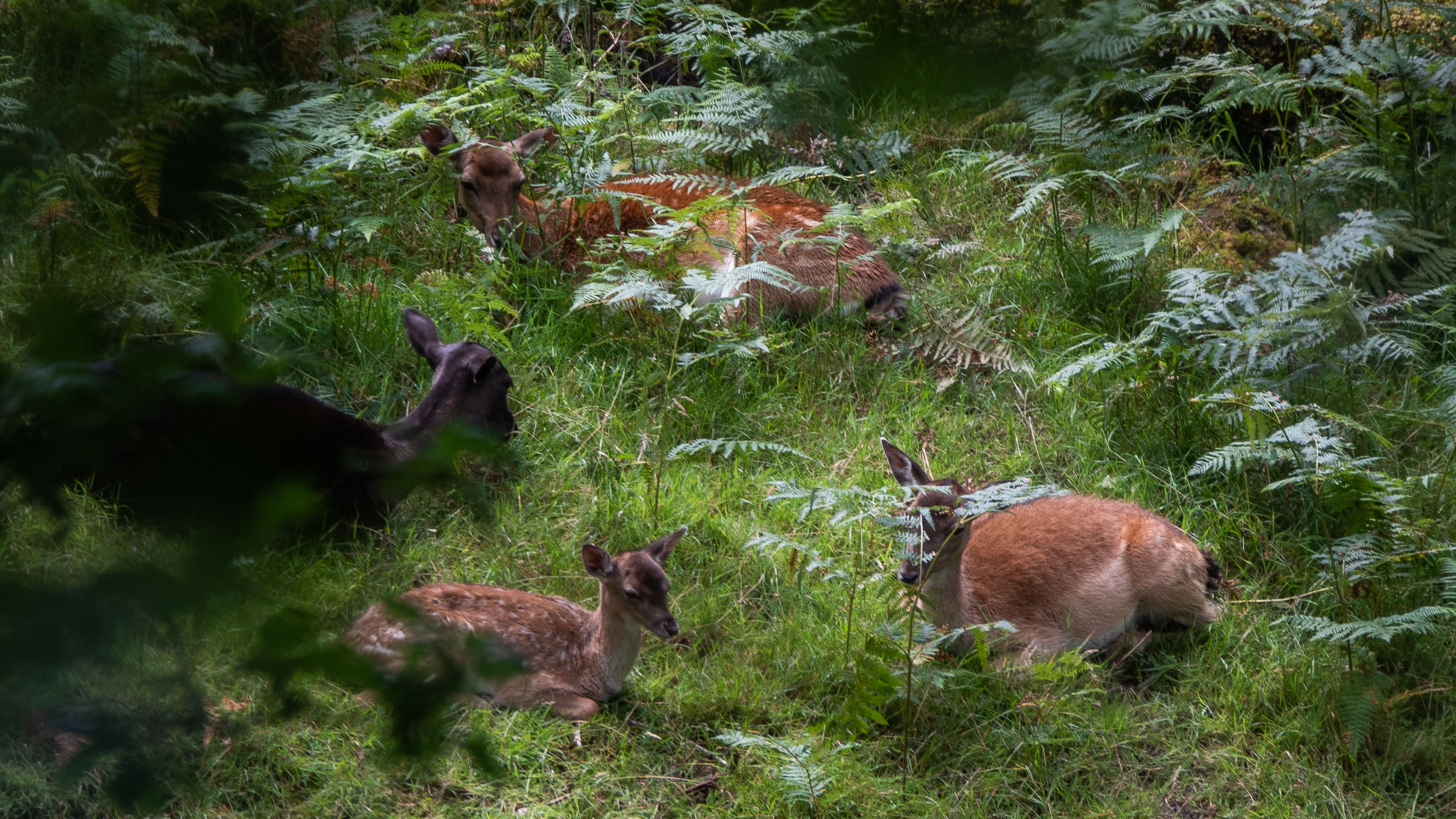 I have written before about my volunteer job at Dinefwr Park, just outside Llandeilo in Carmarthenshire, and half an hour’s drive from my home in Cilycwm. This piece marks the beginning of a regular series of posts about the wildlife and ecology of the park and the records I keep, and I will start in mid-August.

Monday the 12th of August was cool with a mixture of cloud and sun. I have a routine, and I’m a little embarrassed by this, but birds and animals have routines too. They tell the time by the sun and for most of my adult life I never wore a watch to encourage that natural ability we all have to know what time of day it is. Now both my internal clock and my external watch tell me when it is time for coffee (10:00), lunch (12:00) and if I am still here tea (15:00).

That Monday I began early, before the park was open, because I wanted to take some early records from the big ox-bow lake in the Towy flood plain which is overlooked by the Castle Woods bird hide. There was an exciting new development. (Look, don’t get carried away. I’m talking bird here, not world events.) For the best part of two years there has been a single great white egret present almost every time I have recorded the birds. In mid July for the first time there were two! The GWE is one of the most recent immigrants. They are spectacular and beautiful and a very welcome edition to our resident fauna. 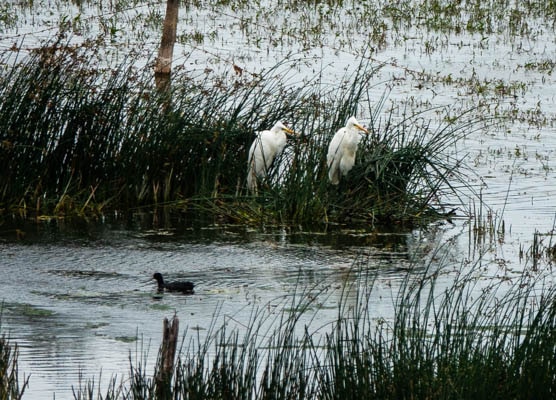 They were still there and I also recorded:

8:45 1 Little Egret, 1 Grey Heron, 2 Mute Swans, 1 Kingfisher, 19 Coots, and 3 Moorhens. I took some video of the egrets and found when viewing the clips that there was a single Ringed Plover amongst them – more excitement. This is the first time I have recorded a wader here!

The deer park opens at 10, and for the next two hours I will be moving slowly through the park watching and recording the deer and checking the condition of the boundary fence. The geography of the park is spectacular, owing largely to the landscape design of the celebrated Capability Brown in the 18th Century. From the lawns of Newton House, a  long grassy valley sweeps away to the south, separated only by an invisible ha-ha ditch. To the left the ground rises to a wooded knoll known as Caelan, and the grassy valley meanders eastwards below the knoll where it merges with a steep grassy bank covered with thousands of ant-hills. 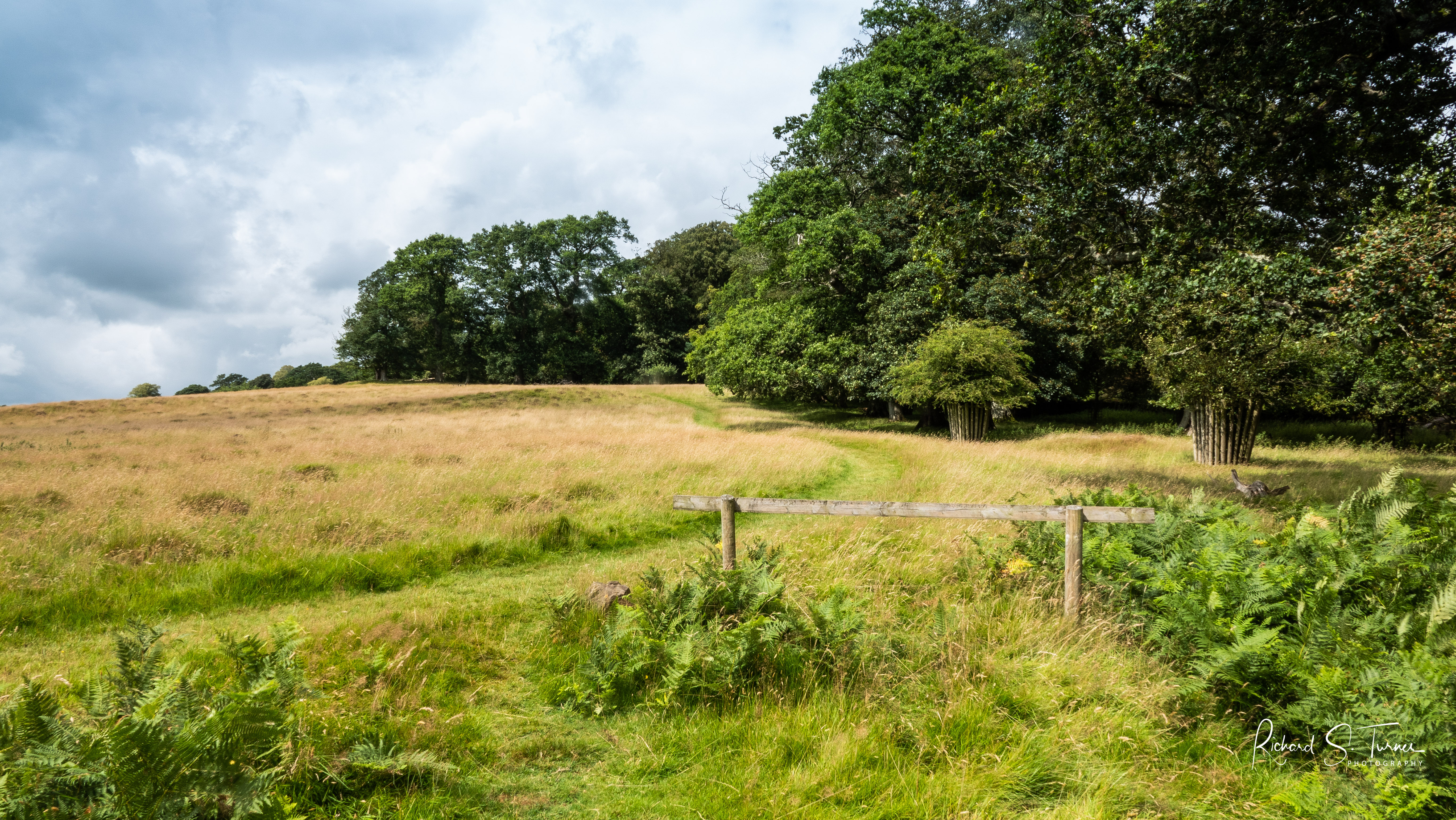 To the right the ground right rises again to the long steep ridge known as Rookery Ridge, also clothed with huge mature trees.

A beautiful path known as the Brown Walk in honour of the great man, winds its way along the east side of the ridge, but the crest and the land to the west is part of the sanctuary area and closed to the public.

At this point I should say that for large parts of the year, there is plenty of opportunity to watch the deer from this path. I am able to move beyond it only because I work as a volunteer.

The north-western and western boundaries of this are formed by an ancient wall, covered in mosses, lichens, ferns and even bushes, and I normally start my boundary patrol at the northern end of this wall. The wall takes an obtuse angle turn half way along its length and then plunges down into two very steep little valleys clothed with widely spaced ancient trees – mostly oaks. In winter this is an open landscape, brown and khaki, but now in high summer it is smothered in head-high bracken, interspersed with nettles,  and very difficult to negotiate. 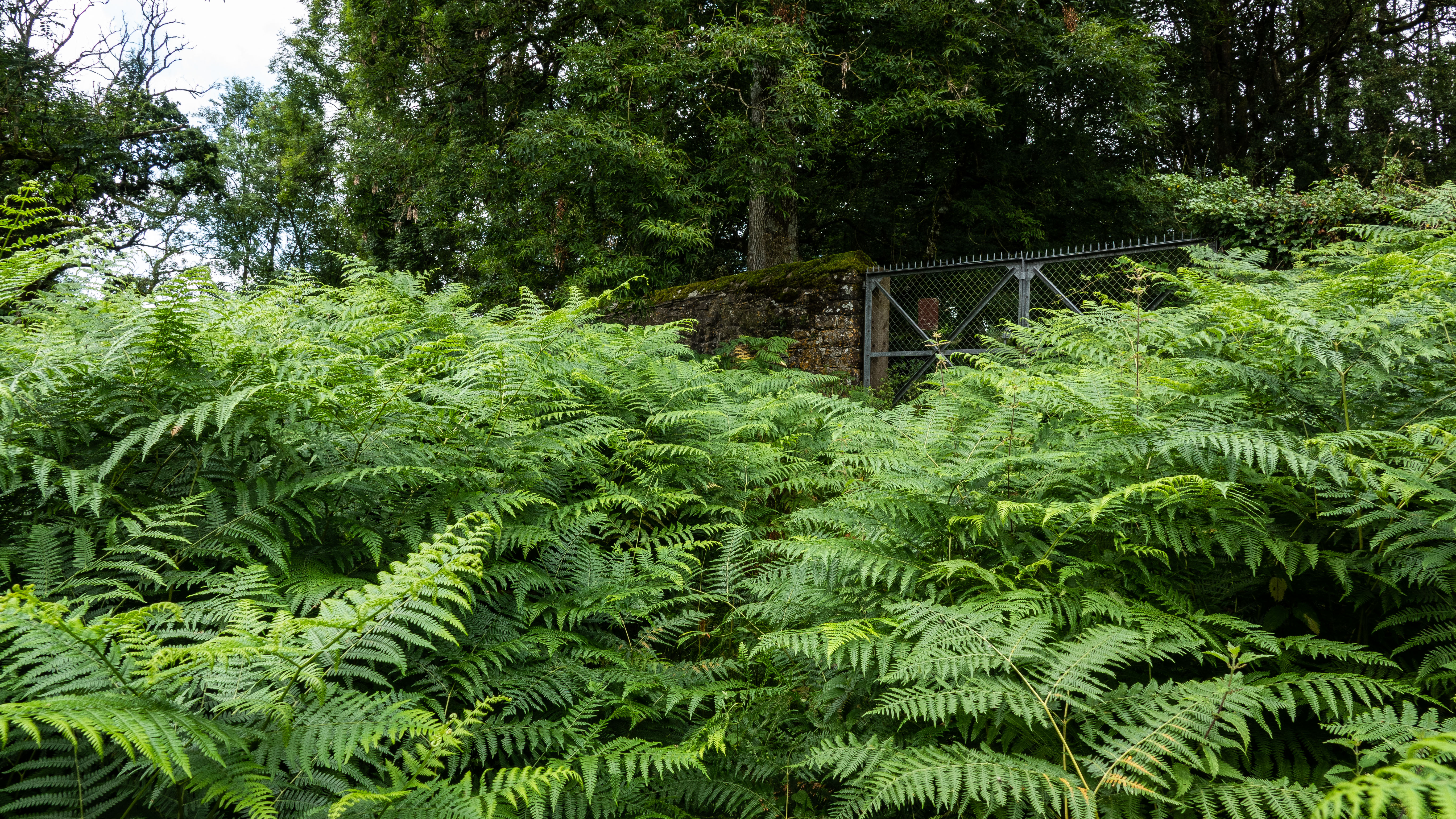 I walk slowly because I have been learning how to avoid frightening the deer. These are not domesticated animals and have a well-founded fear of humans based on centuries of hunting and culling. I’m getting pretty good at it. At first I would try to follow the stalkers’ advice to keep always to always to windward – to have the wind in my face. They have a keen sense of smell and this is certainly good advice, but I have found that their eye for the slightest movement is even more acute. Sound too is important. Any one of these three stimuli can cause all the heads to shoot up, the huge ears to scan the sound spectrum and the great round eyes to fix on the point of movement. Stay stock still and the chances are that after a few minutes the heads will go down again and you can move very carefully into cover. 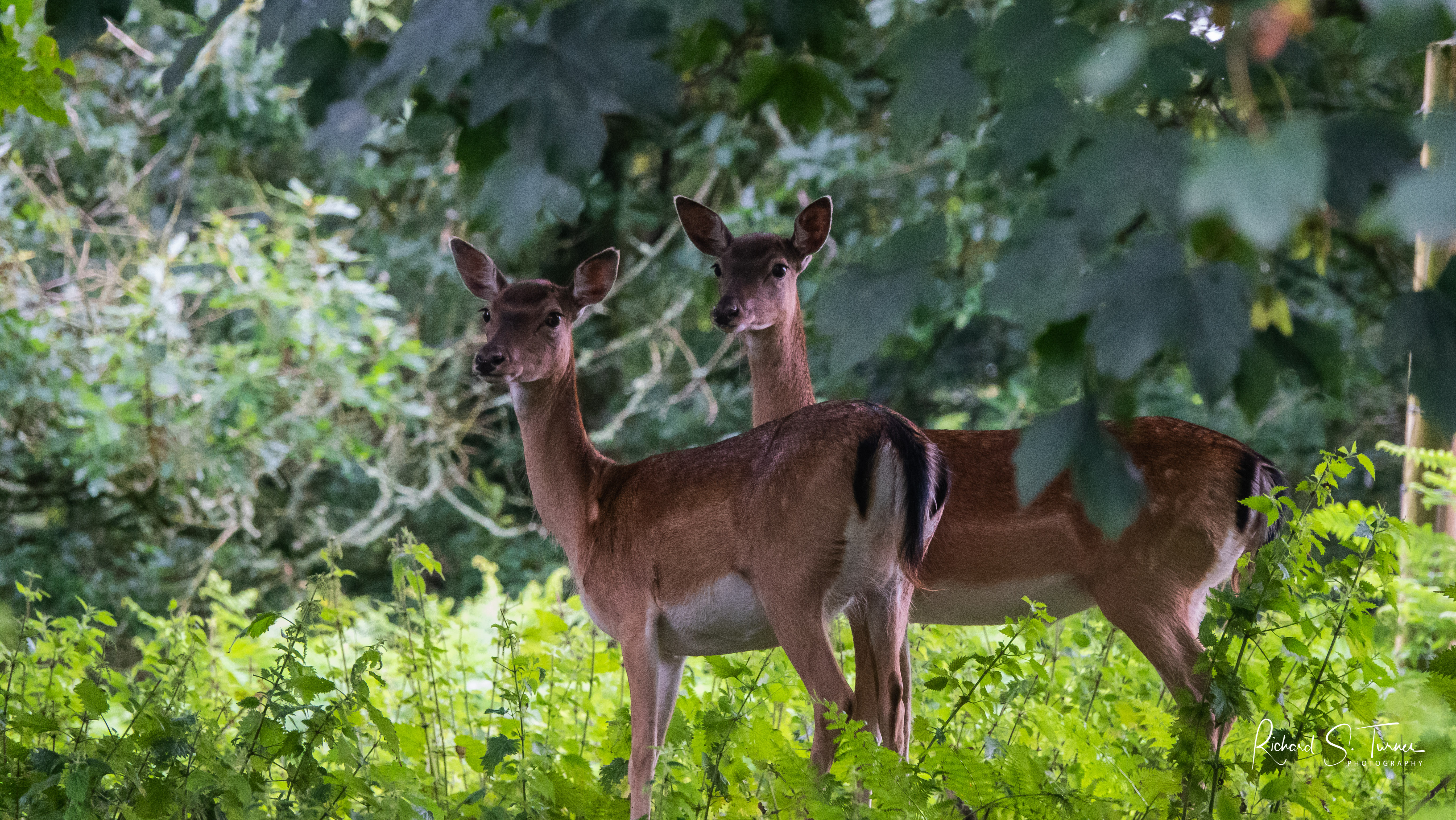 What I am recording is their distribution and social life. June is when the fawns are born and for most of June and July the does are spread out through the bracken, keeping their babies well hidden. As is evident from their colouring, Fallow Deer did not evolve in temperate forests, and the pale dappled colours of the fawns do not camouflage them in our green undergrowth, so the does need the sort of dense cover which the bracken provides to keep them hidden from predators – foxes, badgers and above all humans.

The bucks meanwhile form a boys-only gang, preoccupied in getting enough calories and calcium to fuel the astonishing growth of their antlers. This began in April when they shed the previous year’s growth and the growing points called “pedicles” appeared. 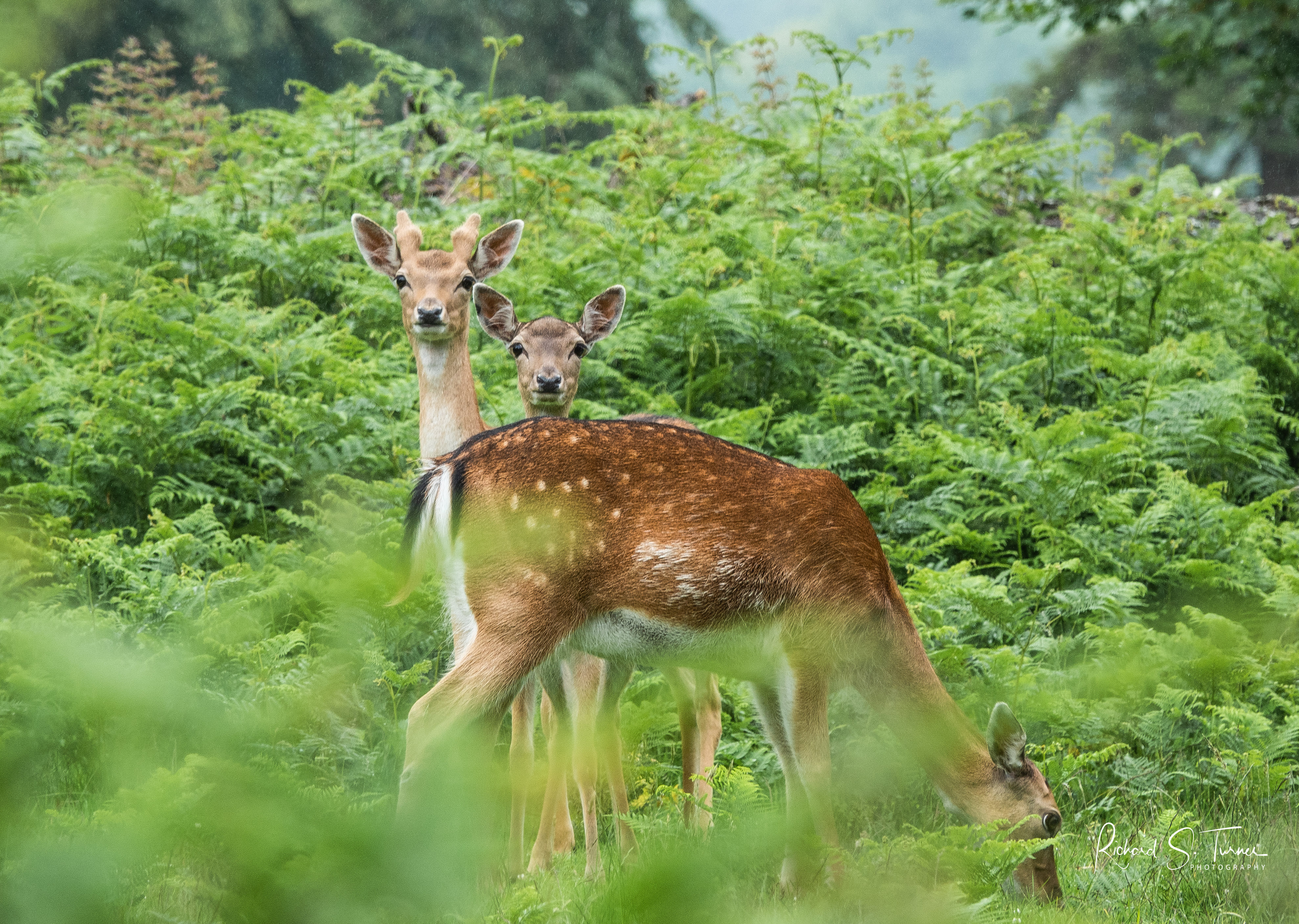 Within weeks the first tines appear, covered in the blood-rich “velvet” which feeds the growing bone. Now the antlers are fully formed, but the bucks have an even more pressing concern in August – staying alive. This is when the bucks are culled, and some of the mature males will not make it.

Most of the youngest bucks, distinguished from their sisters only by two short spikes, and thus known as “prickets”, will stay in the undergrowth with their mothers, but the second and third year bucks can join the gang and are also subject to the cull.

This week I begin my rounds by walking up the Brown Path and over the ridge near the northern boundary to the Badger Hide. This is set in a very craggy area of old quarry workings overlooking a smooth grassy area bounded by mature trees. The week before I had spent half an hour here and seen barely a living thing. This week I expected the same and was getting to the point of severe boredom when I spotted movement. What followed was an enchanting 30 minutes in the company of a group of does and fawns behaving in a completely relaxed and natural manner. 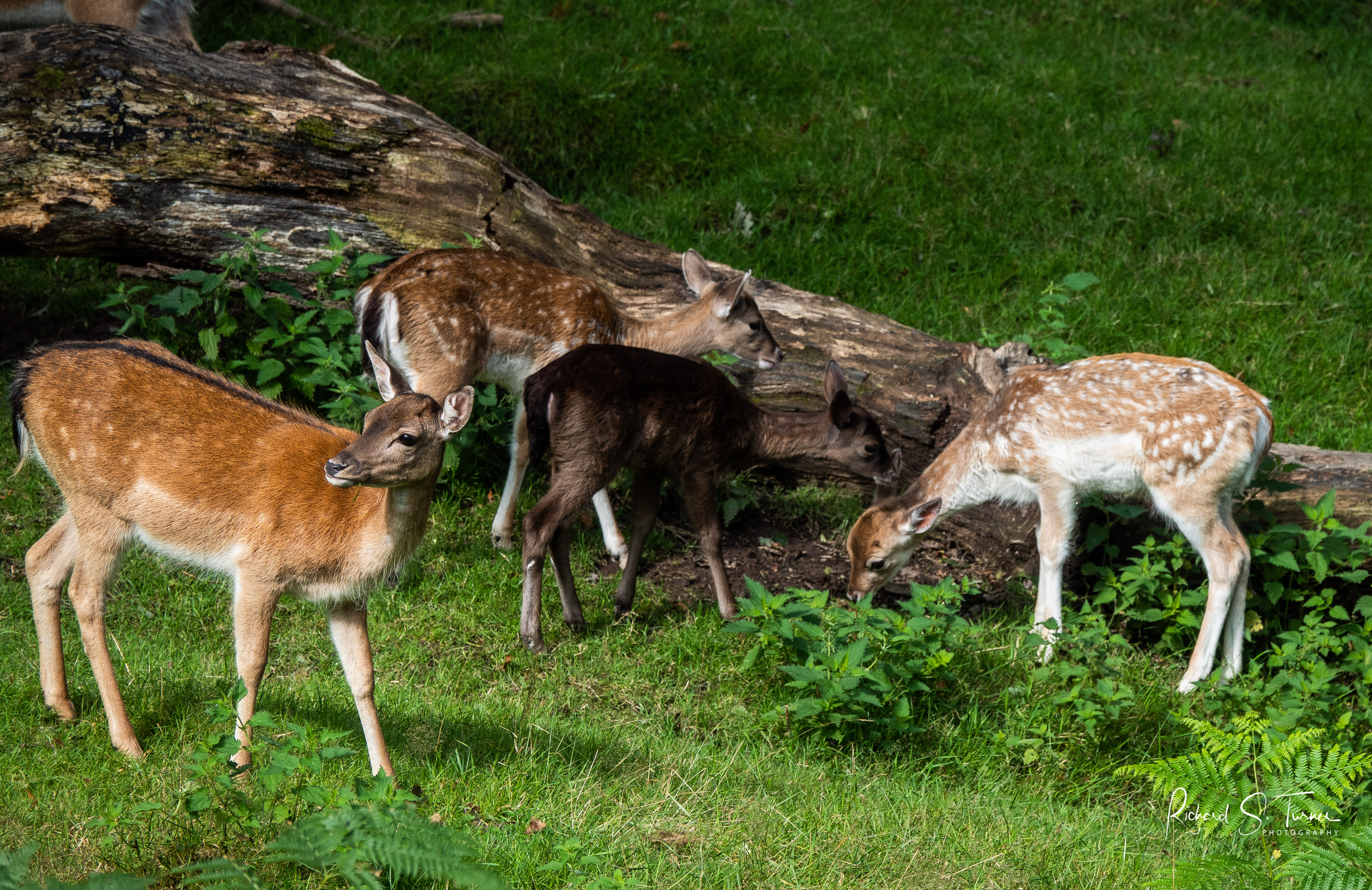 I captured it all on video, but am still learning not only how to edit the clips but how to make the resulting 500 megabite file into something small enough to show here!

That was the high point of the day. As usual I slowly patrolled the boundary fence and found no problems. At lunch time I spent an hour in the Kingfisher Hide overlooking a small, lily covered ox-bow lake, watched the usual resident moorhen, and saw a kingfisher flying rapidly across the lake, but otherwise only a few common dragon and damsel flies.

The big-boys gang were all together tightly bunched in the long field below Newton House. I counted 21 of them, mostly mature.  (Picture from July) 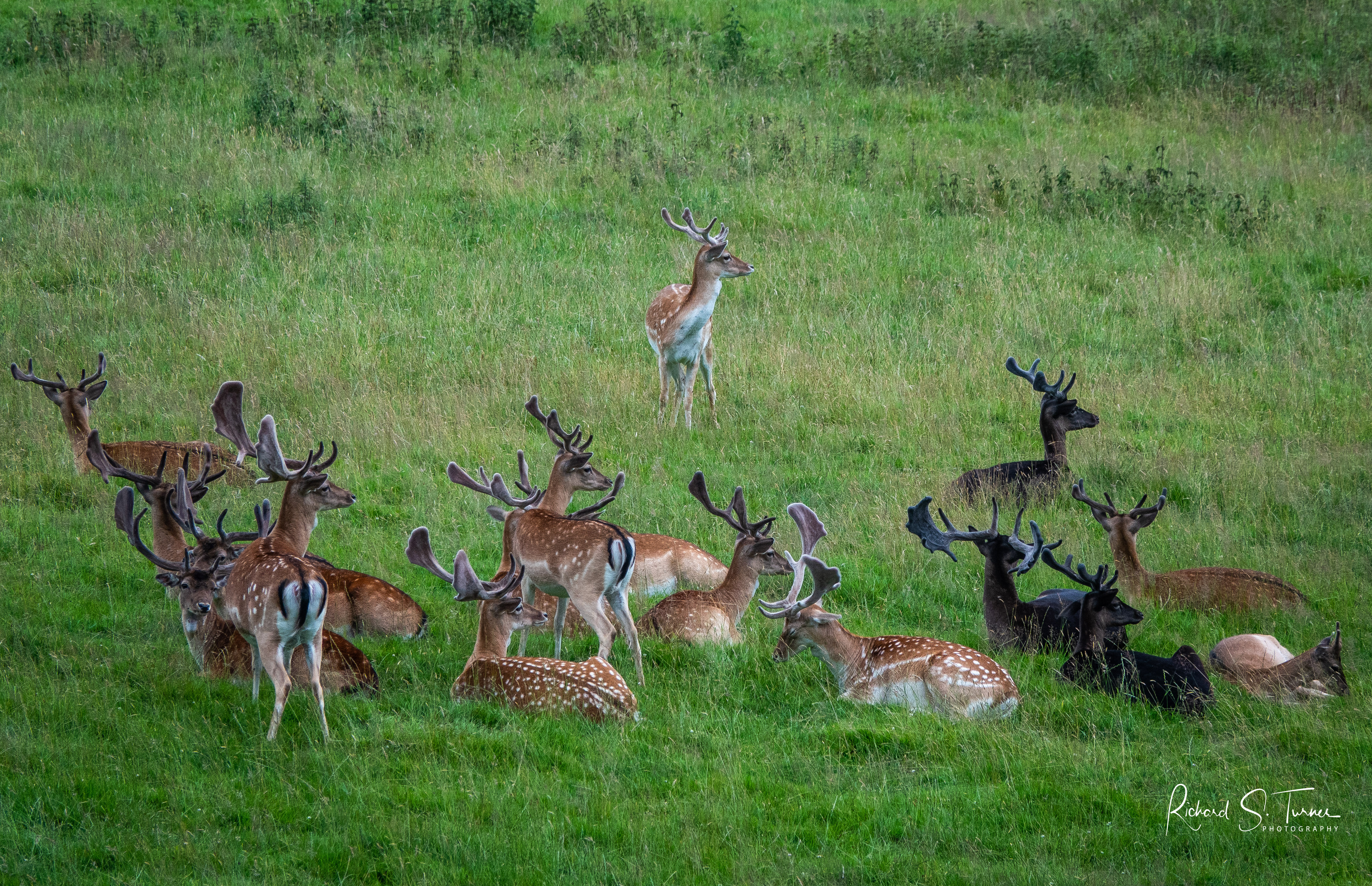 Some days at this time of year I battle through the often very wet bracken, get stung by the nettles, alternate between overdressed and sweaty or underdressed and cold, and get depressed by the absence of birds and the seclusion of the deer.

This week made it all more than worthwhile. It was sublime.