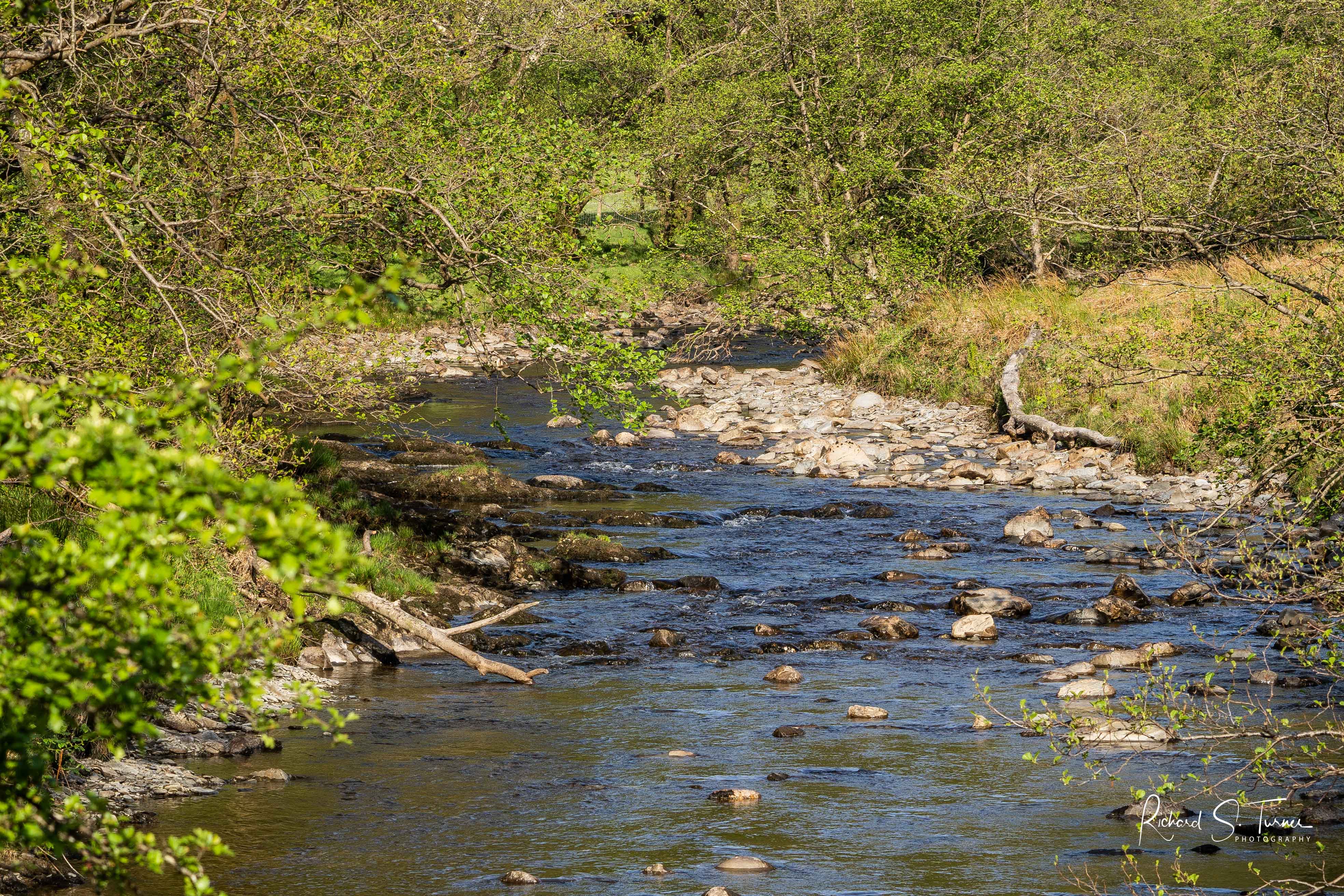 Yesterday, before anyone was around, in cool sunlight I unfolded my folding bike and rode to the point where the Pisgotwr river runs into the Towy. A “pisgotwr” is a fisherman, but I have never seen a fish in the river, and the signs indicating angling beats are decayed and derelict. There is a road sign with one arm which points on up the valley to Llyn Brianne and one which points over a new wide ugly metal bridge over the Towy to Troedyrhiw (foot of the slope). A few hundred metres upstream is the new pumping house for the privately owned hydro scheme which is scarring the valley and silting the river.

When I first discovered this place in mid-seventies it was magical. I spent many hours as a volunteer nest guard watching the big cliff above the Pisgotwr called Craig Clungwyn where peregrine falcons had nested for countless years. 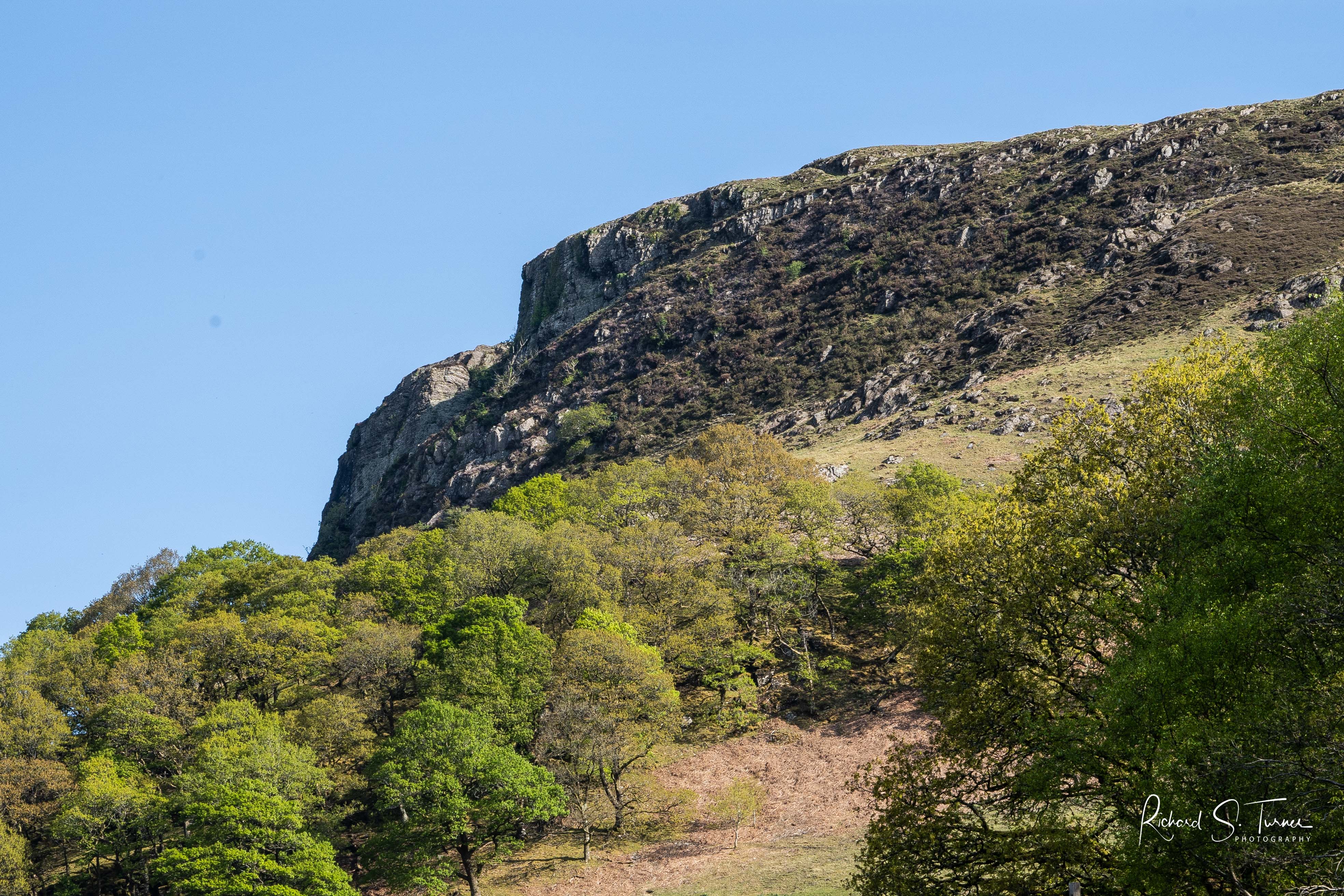 I once watched one of the birds stoop on a flight of racing pigeons hurrying down the valley. There was a brief flutter of feathers and one less bird flew on. There are no peregrines there now, though they are still around. Instead there is a kestrel.  Peregrines now find more food in the towns and cities than out here, but kestrels, driven from their roadside verges by pesticides, find refuge in the mountains.

All around are the great  hanging oak woods of the upper Towy, last refuge in the first decades of the twentieth century for the Red Kite. It was from the top of Craig Clungwyn on a bright March day 45 years ago that I saw my first Red Kite, and to make the experience unforgettable, it flew beneath me fox-red against the dull greens of the valley. The 120 year story of the re-establishment of the kite is an inspiring conservation success, but it hangs in parallel with big declines in other species.  Crows and Ravens though are flourishing here on the great bounty of sheep carrion spread across these hills. Further up the valley, by the little wooden bailey bridge, a path leads on to the rough old cottage we bird volunteers used to sleep in. Over the bridge and further on there were sandpipers bobbing from stone to stone, and in early spring great orgies of frogs mating. Now this sturdy cob stared at me but did not move: 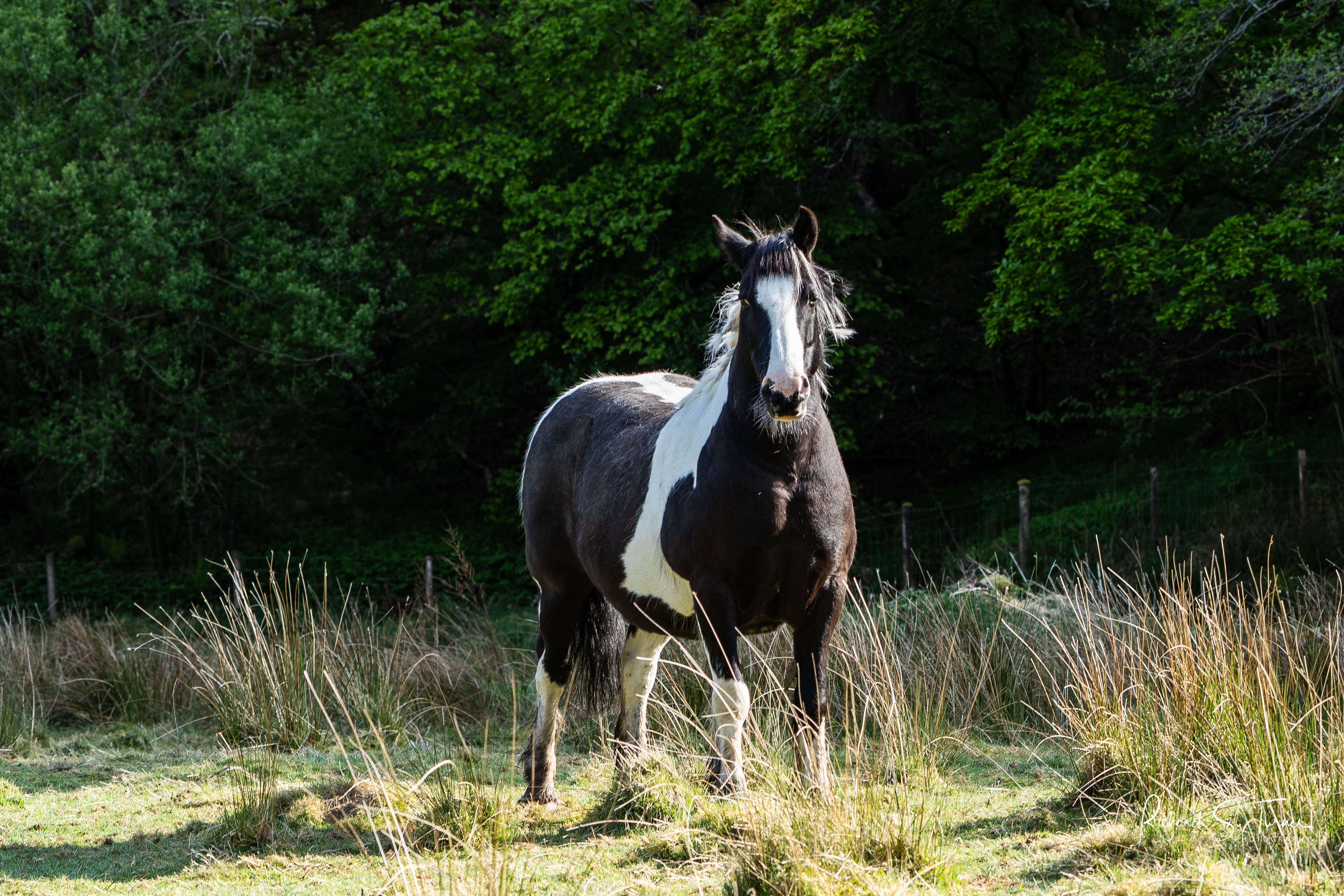 The road winds uphill and the path branches. On the right a track leads up over the mountain to the isolated Soar y Mynedd chapel. In the seventies there was no road up there and I spent an hour or so talking to a tramp-cum-hermit who lived in the preacher’s cottage attached to it. On the left it runs through a farm yard and on to Troed-rhiw-cymmer, (foot of the confluence slope) a small farm with a heavenly view then owned by a family from the English midlands called Voyle who became friends. In later visits they lent ponies to my children so that they could experience the lovely Doethie river which joins the Pisgotwr at the confluence. There is a footpath through this little valley which climbs np over the hill and also leads to the chapel. Here, in the 70s I saw Merlin nesting, a Ring Oozel and once even a Golden Eagle, though at the time I thought it must have been a buzzard. Many years later I discovered that it was indeed a falconers eagle called Random.

The biggest change of all, and the one that led to all the others, was the building of the Llyn Brianne dam in the sixties. Having discovered the area ten years after it was built I can only imagine how remote and mysterious it must have been before then, but I also learnt how hard life was for the scattered farms by talking to those who had moved down the valley. There was little regret amongst the local community when the dam was built. Nobody was thrown off their land, and the winters up there were cruel.

Much has been lost, but this is still an intensely beautiful and peaceful place, and on a sunny morning in early May it is alive with birdsong. I locked the bike to a post and began to walk, binoculars and camera slung on either side and a pack with a flask, a snack, an extra garment and a few essentials: notebook, pen, phone, pocket knife. There were two birds I particularly wanted to see, one of which I had never photographed. They are both summer visitors little seen further east: Pied Flycatcher and Wood Warbler. Every year for the past few  years I have made 50 new nestboxes for the RSPB Dinas reserve, just over the river, and all intended to attract even more Pied Flycatchers. I didn’t see any so conclude that they are still in transit. I did though chalk  up the first Spotted Flycatcher of the year and a Balckcap living up to its reputation as the poor mans Nightingale with its loud and melodious song. 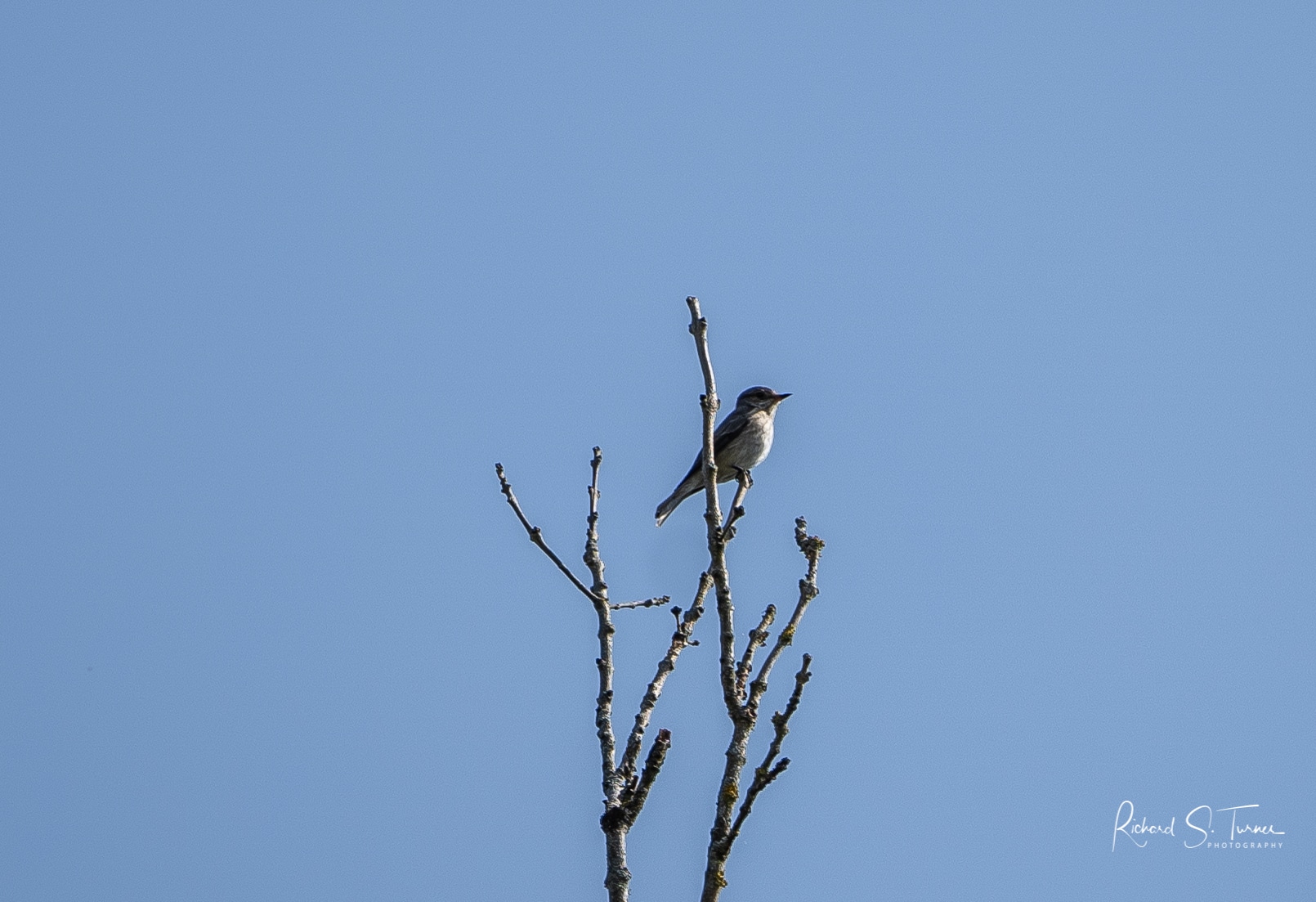 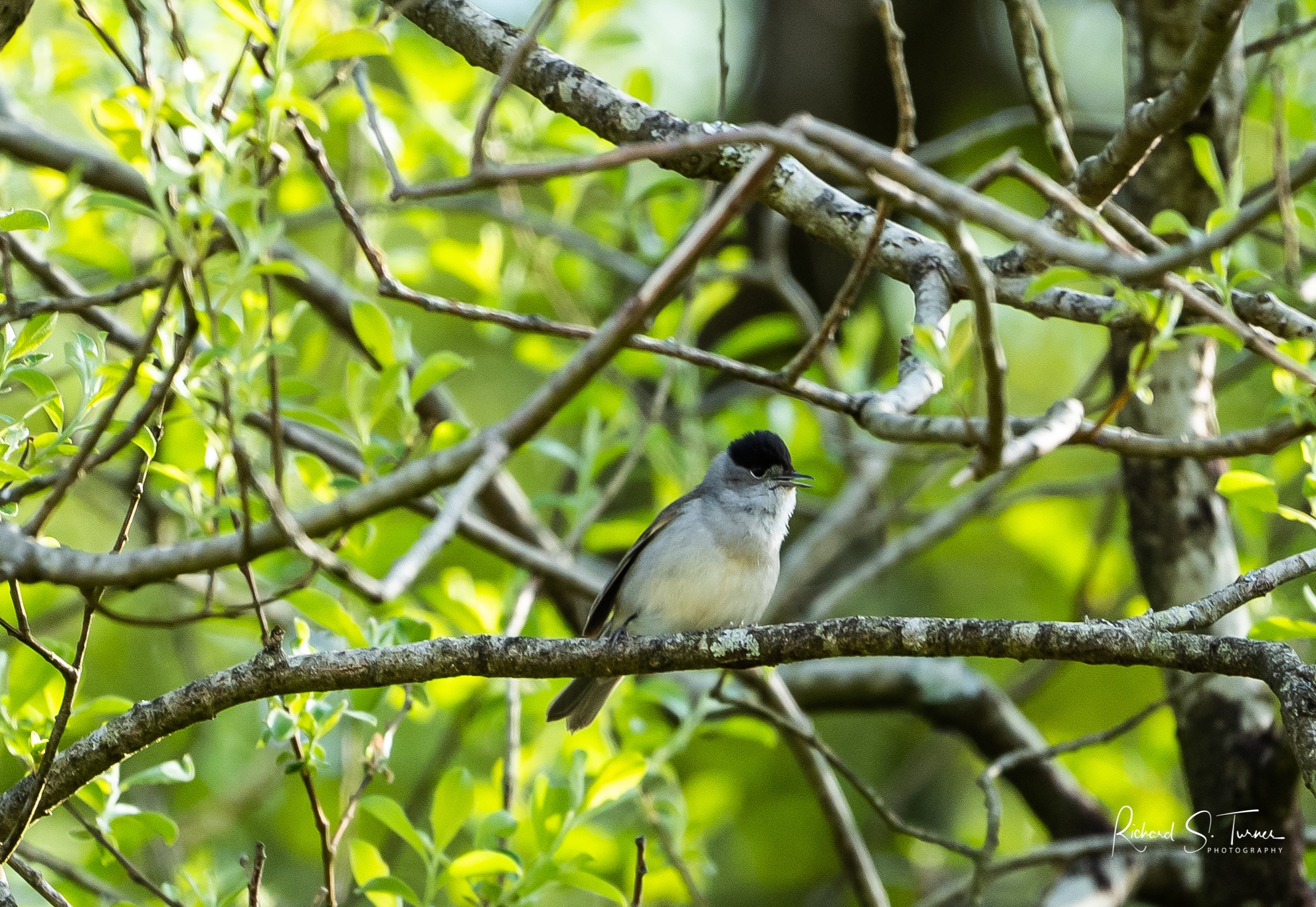 Though it is yellower, the Wood-Warbler is not easy to tell apart from the Willow Warbler except by its song which has a distinctive trill. Slowly walking through an open canopy of fresh spring-green oak and birch leaves glowing in the still-low  sunshine, my monophonic electronically amplified hearing was overwhelmed by different strands of birdsong: Chaffinch, Great Tit, Willow Warbler and  yes, unmistakably a Wood Warbler. I stood and watched and was at last rewarded with this shot. 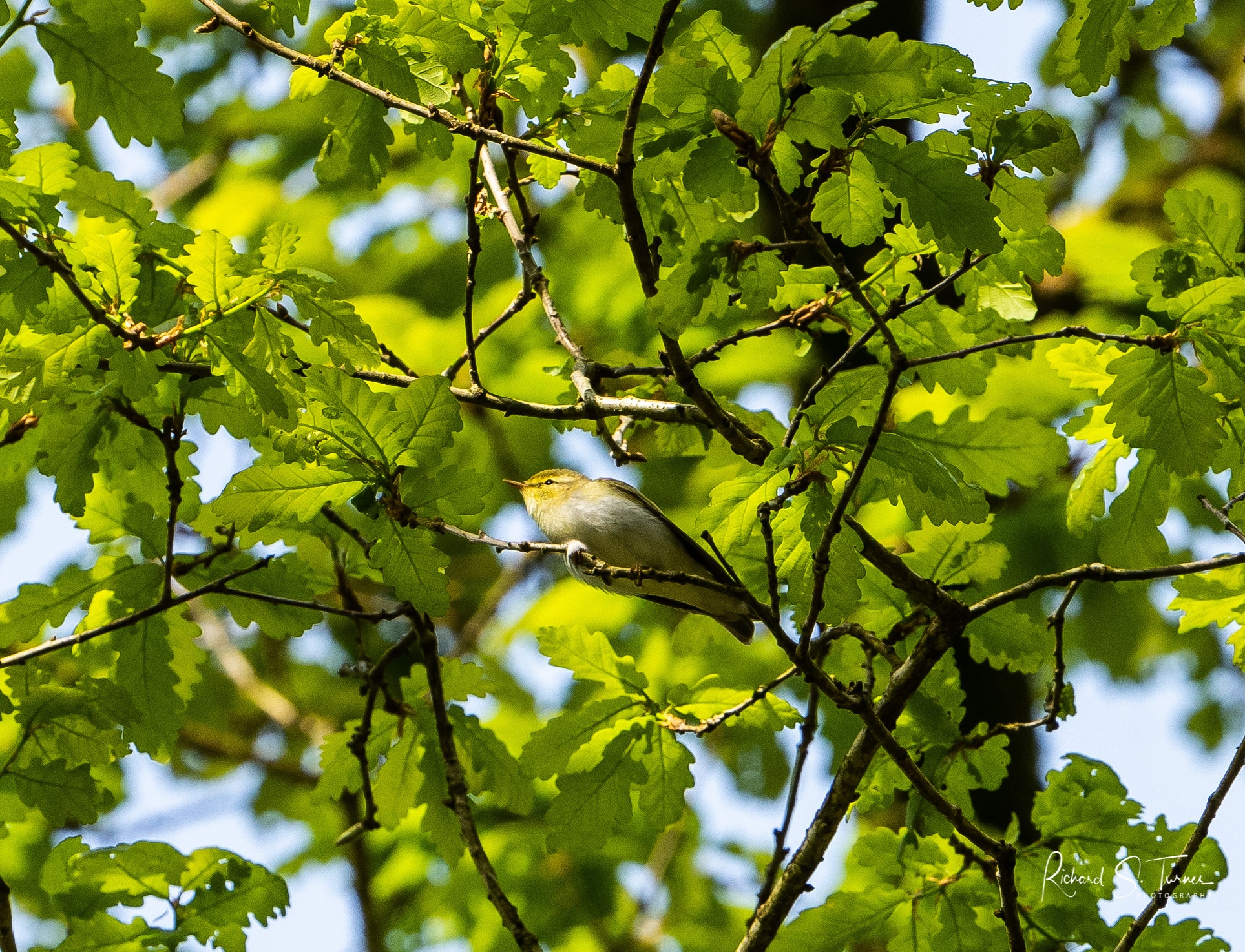 One car passed me going, and on the way back one woman was walking two dogs. Otherwise it was silent but for the birdsong. It must have been like this before all the roads were built. Now the sheep claim the roads, wandering down the middle or sleeping on the verges. There is very little traffic to disturb them.

5 Responses to The Fisherman’s valley