The Red Kites of Llwynsion 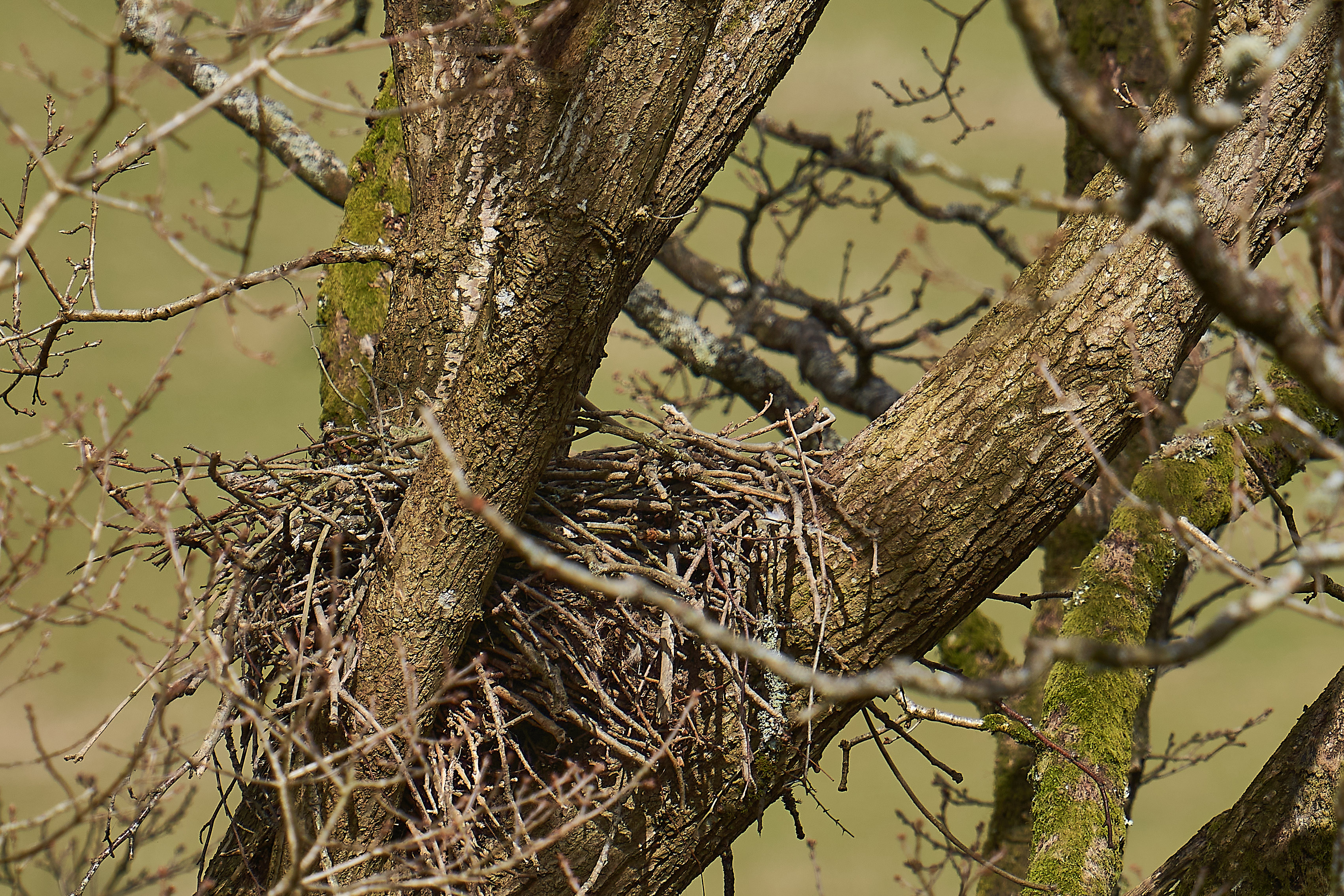 In the paranoid atmosphere of the early days of the first lockdown in Wales, when even a farm gate was thought to be a source of infection, I had little hesitation in saying to Aled at Llwynsion Farm that I would not be doing a kite watch in 2020. Llwynsion is a recent name for the Home Farm at “Neuadd Fawr”, The Great Hall, a Regency mansion just outside Cilycwm – now in spectacular ruins.

This year feels a lot more normal in our little corner of Wales, so, with Aled’s agreement I decided to set up the hide again. It’s not difficult to position it, but protecting it from sheep and cattle involves some fencing. In a spell of dry weather in mid-March I found a couple of old posts and some rails, loaded bar, sledge hammer, power driver and screws plus camera gear and a folding stool  into the car, and made my way gingerly down the track and across the field to the big oak tree where the hide is set. Although there was no sign of the kites, it was important to work rapidly to keep disturbance to a minimum. I took a few pictures of the nest (above) for the record and left.

On the 31st I returned for a longer session and made these notes:

2pm warm sun. 1 bird perched nearby flew off when I arrived. No bird on nest. 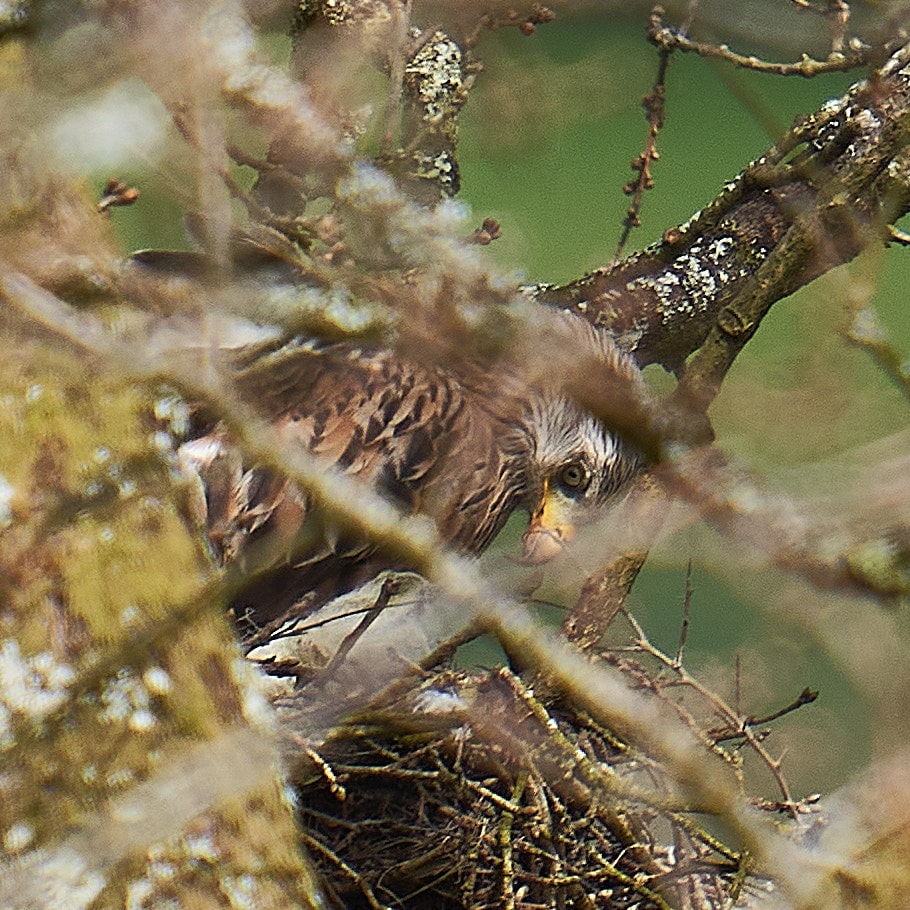 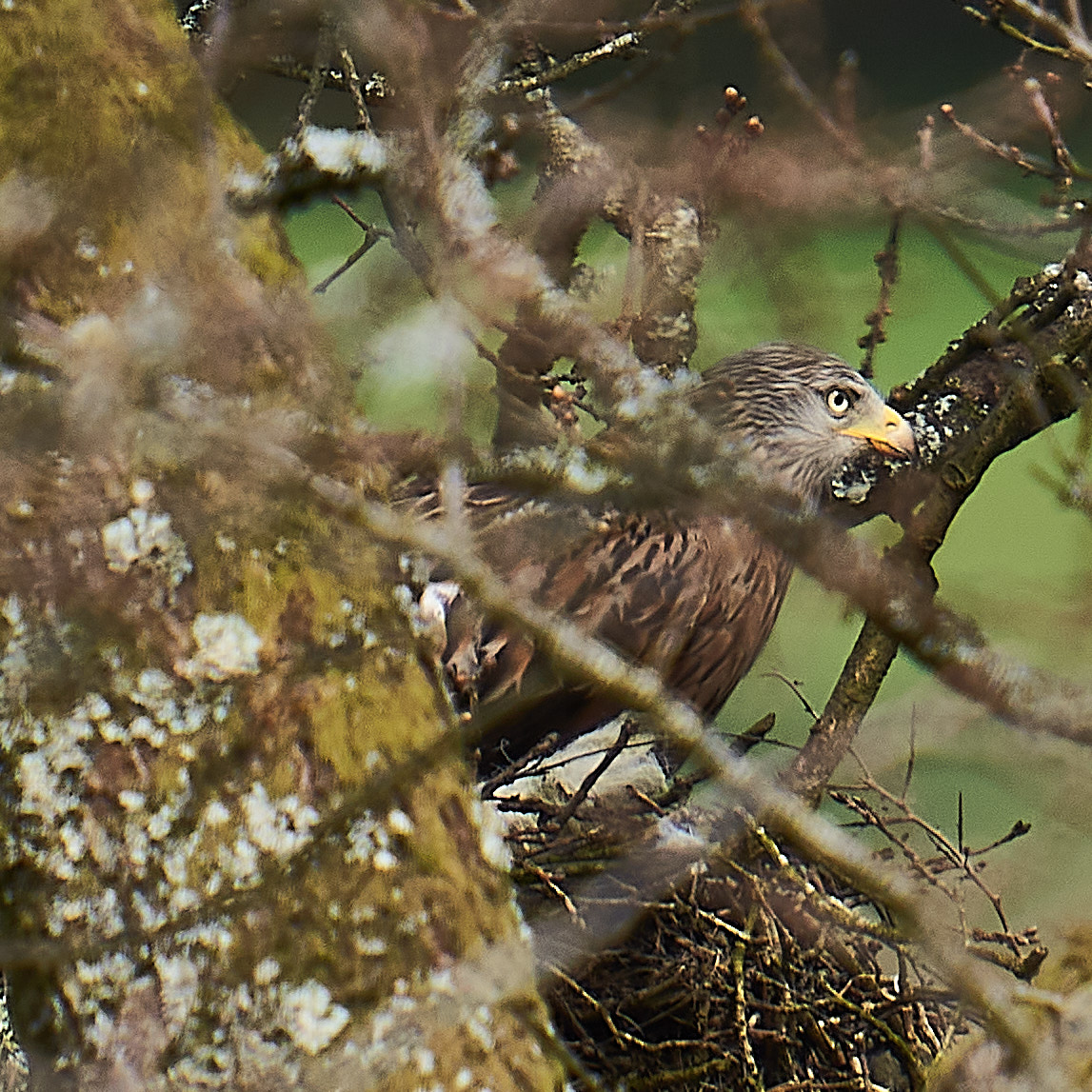 This was extraordinary! A new nest had been built barely 10 metres from the old one. The bird in attendance did not seem to be sitting, but there were scraps of wool, and he or she kept looking down as if about to lay an egg.  It  looked at first like a deliberate attempt at concealment from the nosey human by the oak tree. However, it didn’t take me long to work out that since I had not been there for nearly 2 years and the nest had been built during the winter, a less anthropomorphic theory was required. What had made them abandon the old nest?

The prospects for decent photos of this nest looked poor, but the hide was there, so on 7 April I was back. As soon as I entered the field I could see the familiar white face on the old nest! She was still there when I arrived at the hide but by the time I had set up she had gone. That was 2:15 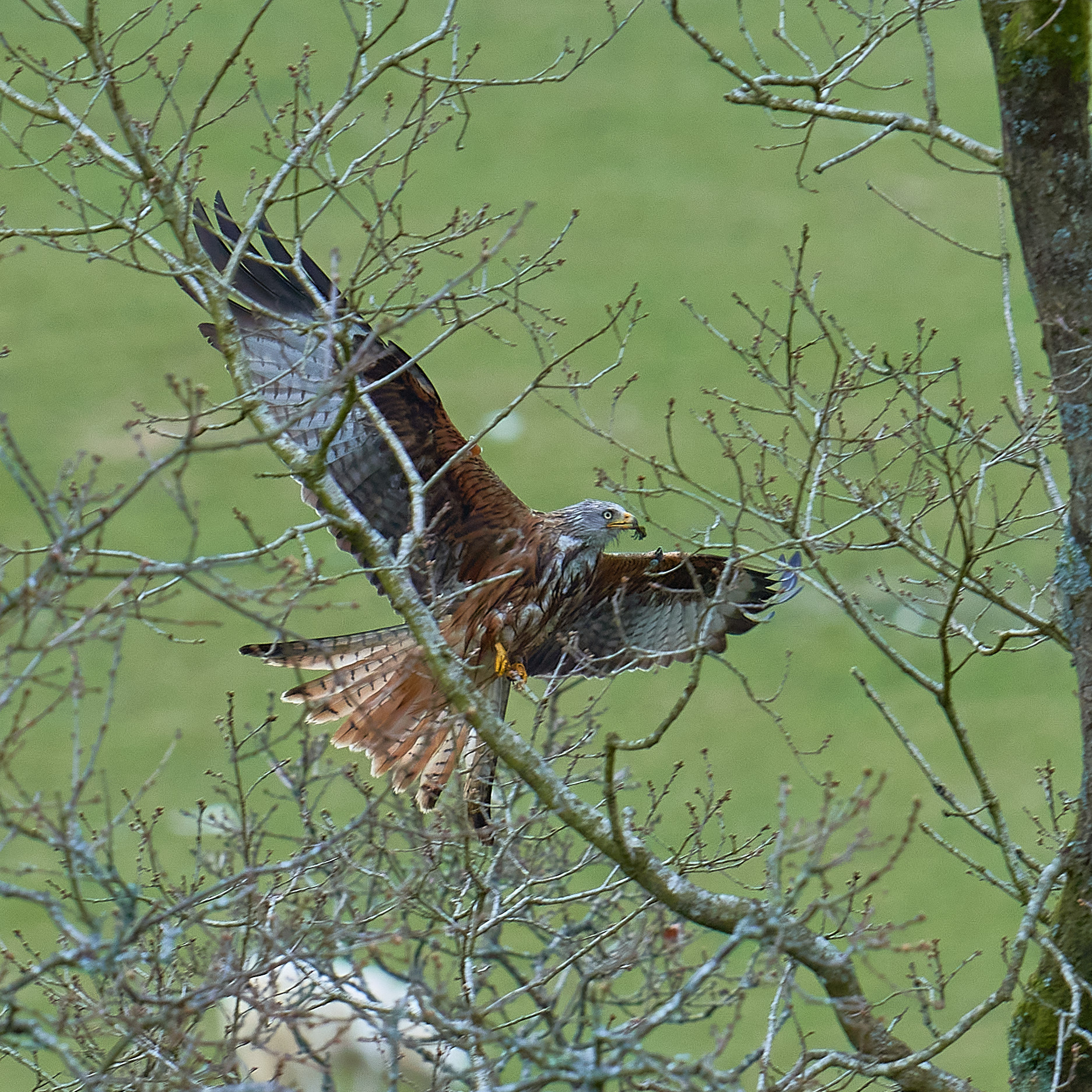 Fifteen minutes later she was back with a food item  – mouse? frog?  Now I could see that this was the same wing-tagged bird I had first pictured 5 years ago. Since this bird seems to do most of the sitting I will assume it is a female. Her tags show she was born in 2006 in Wales, so she’s a real veteran. She was also the most daring at snatching food from the ground when I was throwing out meat scraps at home in February. I shall call her Alpha. 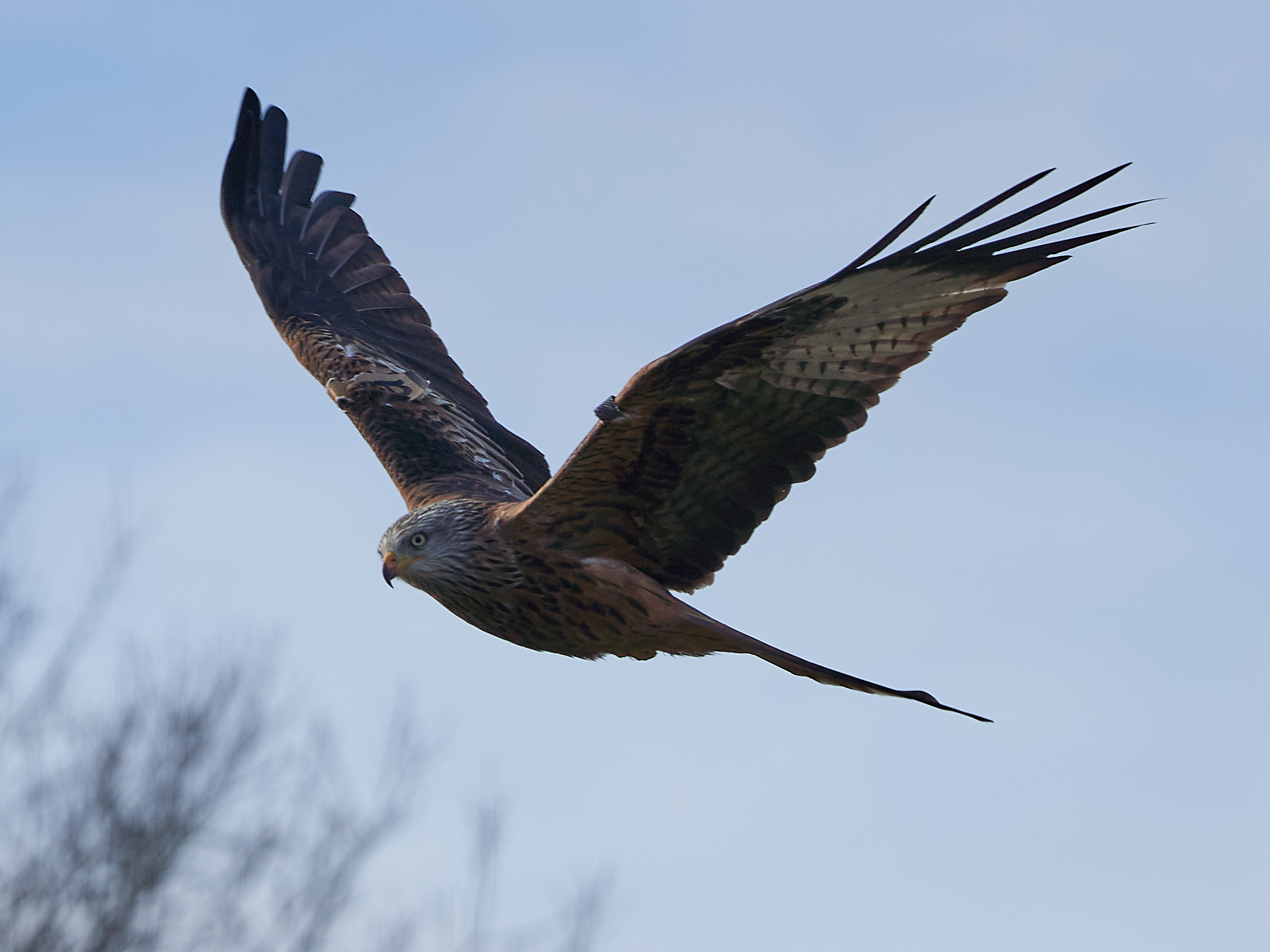 Five minutes later a second bird arrived, perched in the next-door tree but was restless and flew off again.  (In case you are wondering, this type of shot can only be achieved using manual focus.) 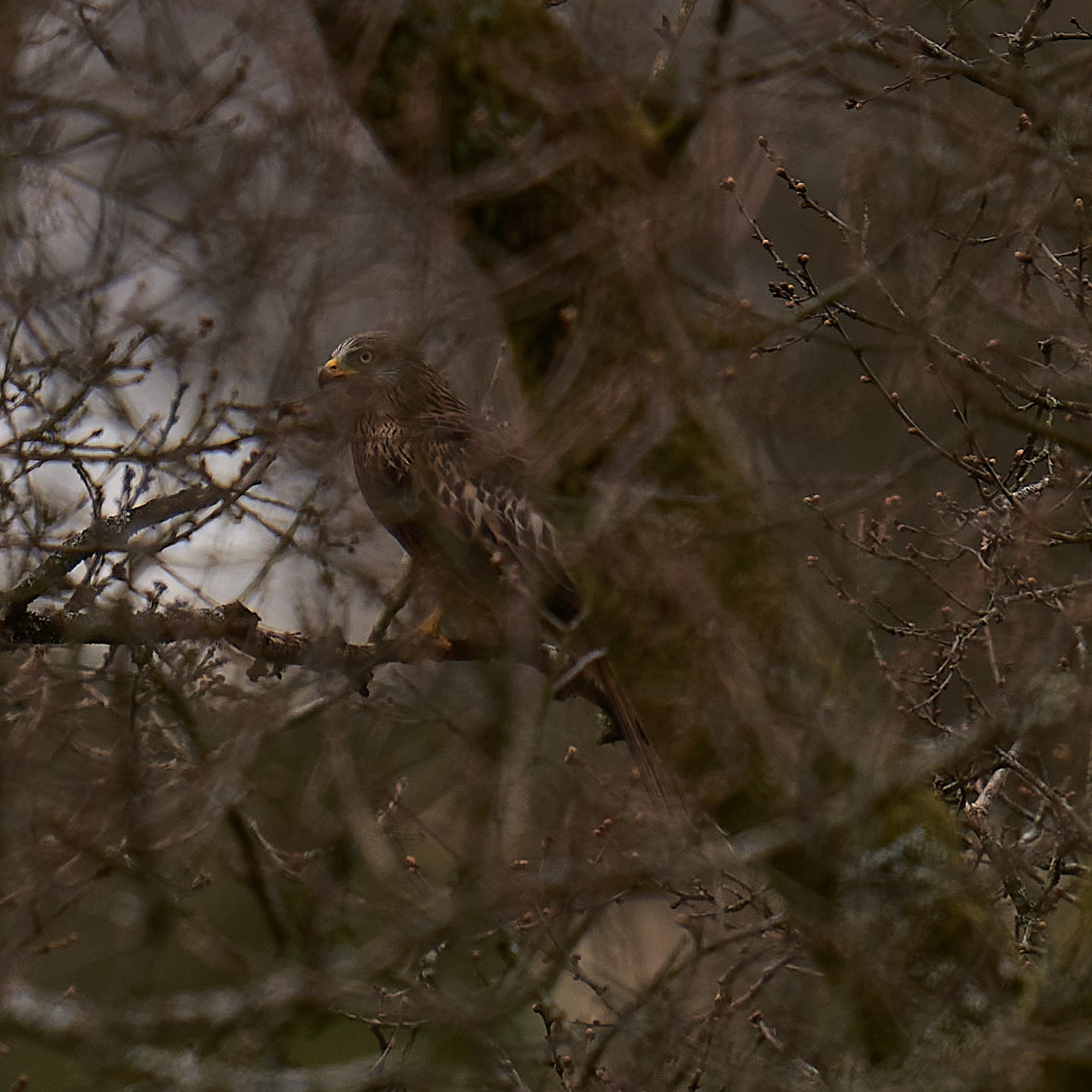 At 2:50 he joined Alpha at the nest, but she then flew off taking her food item with her. 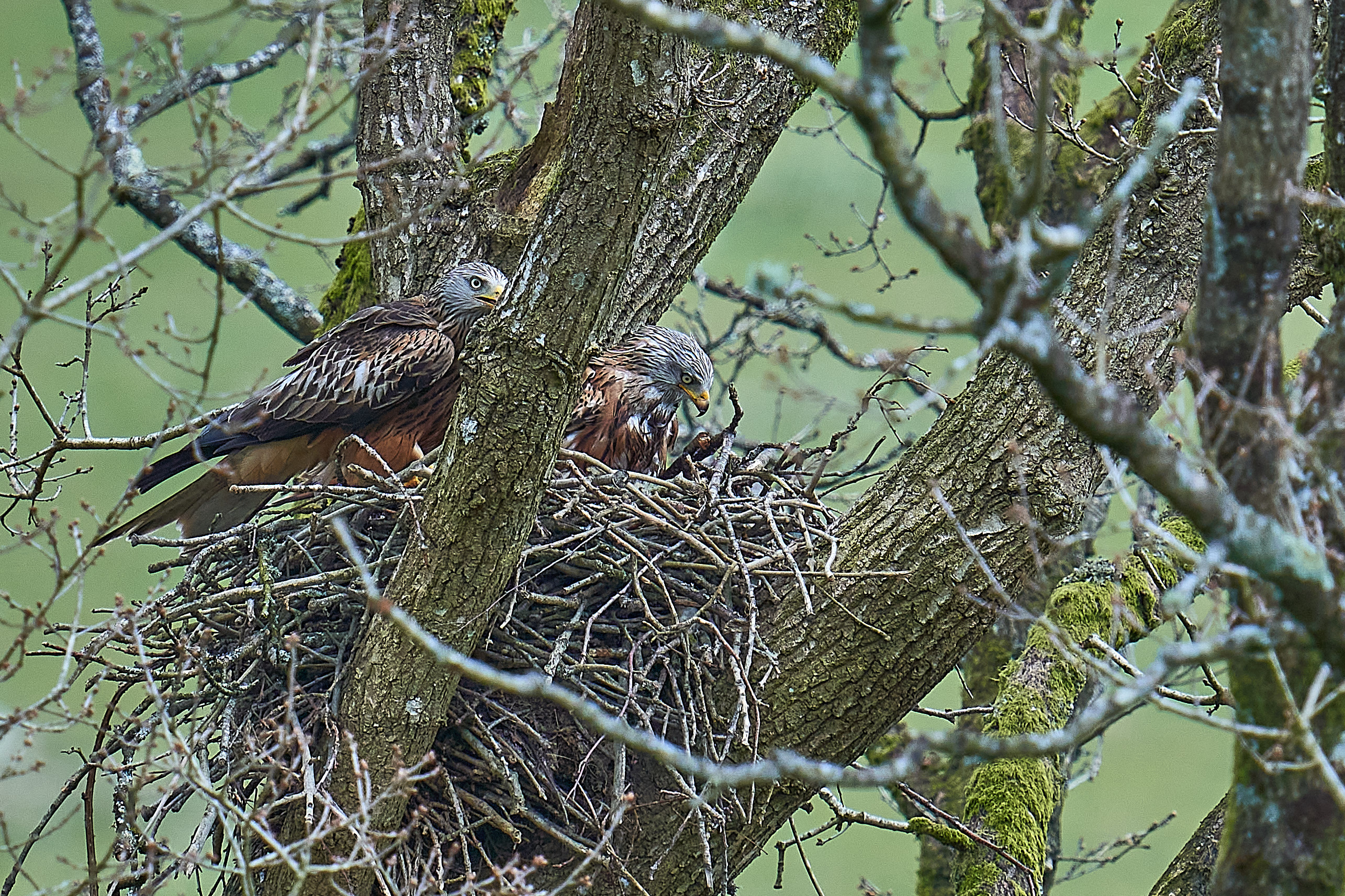 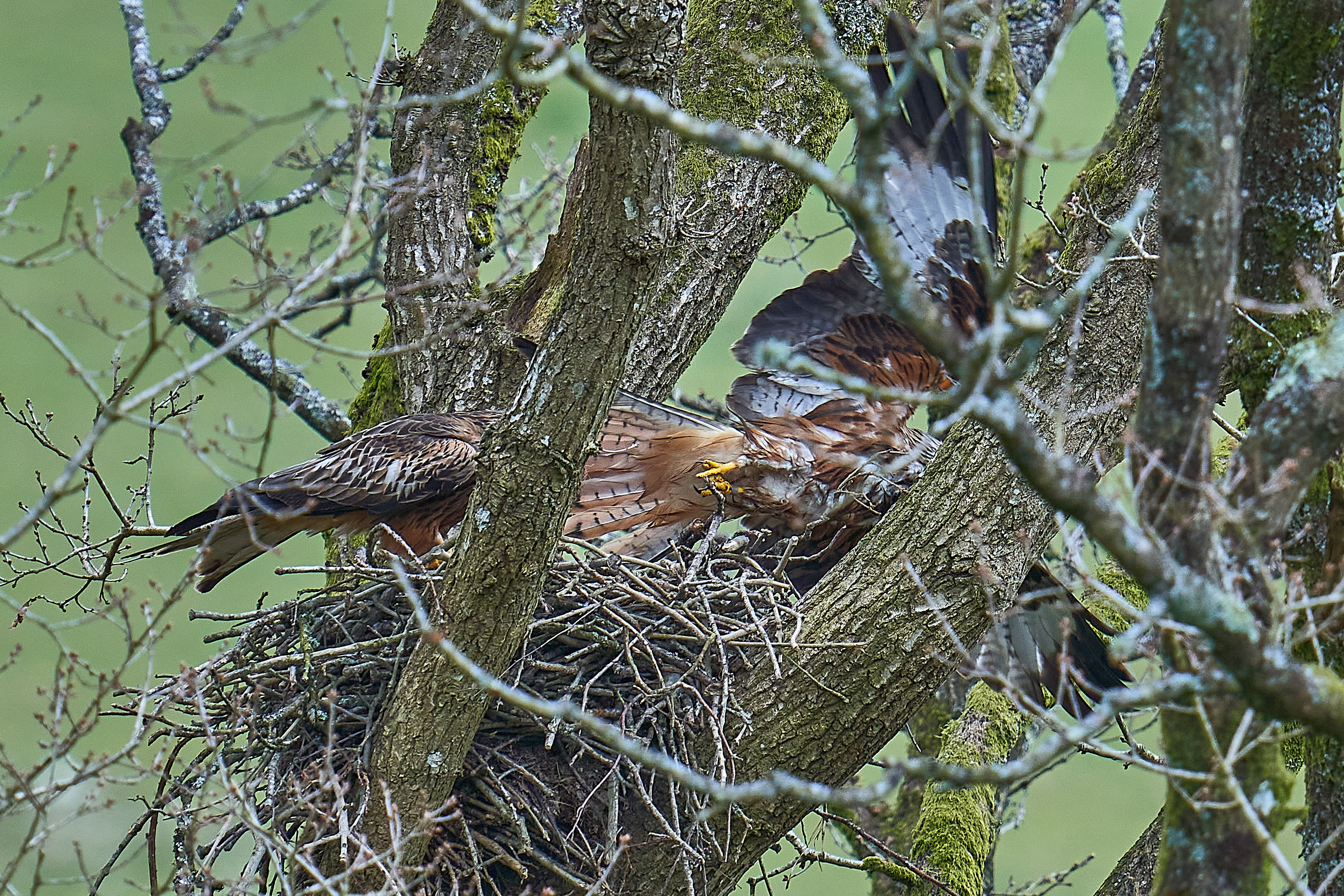 The second bird followed. At 3 one of them flew in but didn’t stay. They seemed restless. At 3:08 Alpha chased off a raven, and at 3:10 they were both doing aerobatics, sparring with another pair of kites, but there were too many trees in the way for me to catch a shot. 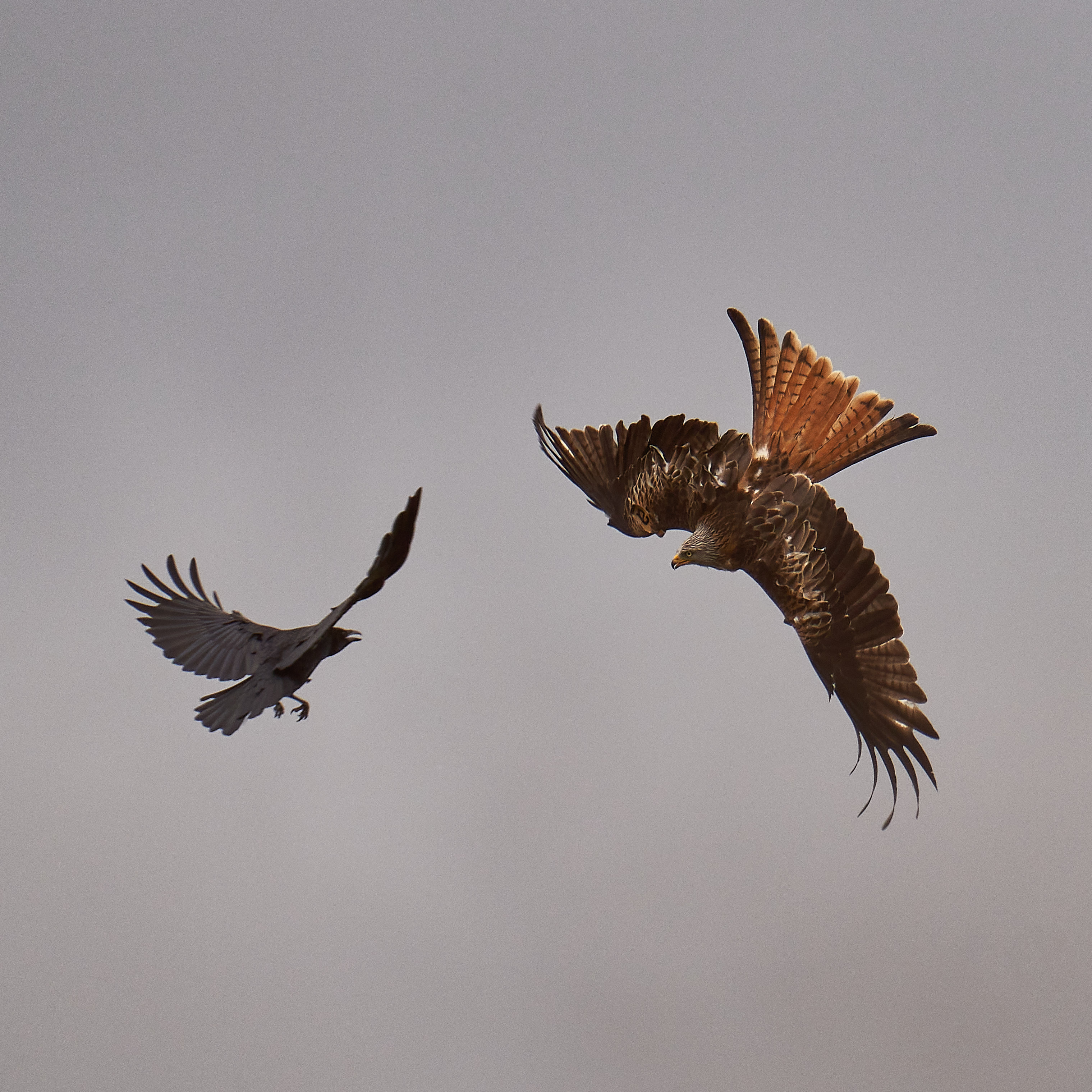 At 3:15 She was back on the nest, and something about the quick and determined way she took up her position made me feel that the restless phase was over and it was time for me to go.

I now think that what has been going on here is a territorial dispute between the established pair, (or at least Alpha with a mate) and one or more usurpers. Kites are what the scientists call philopatric which means they have a strong attachment to the area they were born in, and it’s quite likely that the usurpers are Alpha’s offspring.

How and why did they manage to build a nest so close to the old one? Perhaps Alpha was too pre-occupied with my feeding routine in February. 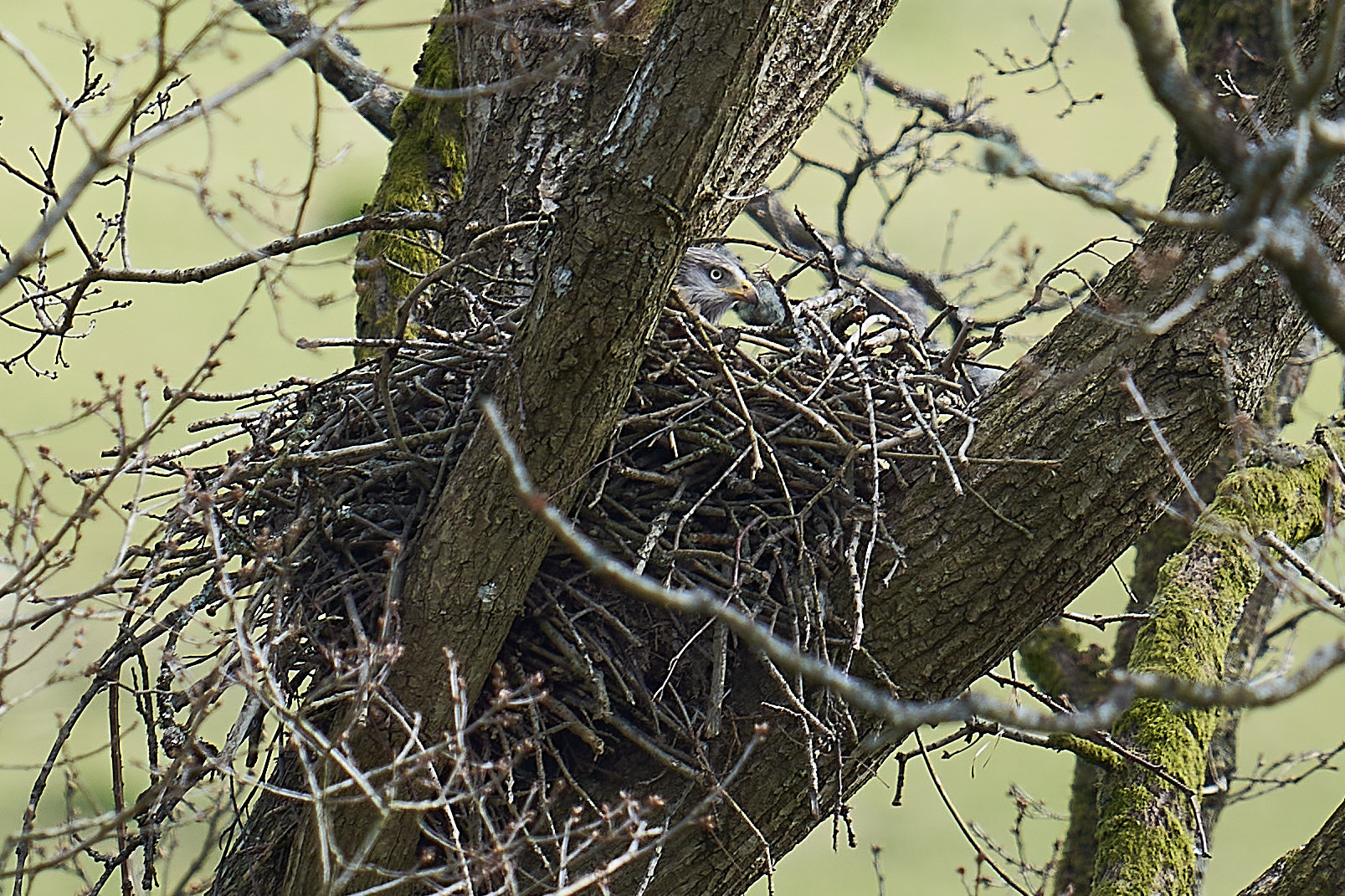 Sunday morning, sunny but cold. When I arrived, got the pack and stool into the hide and set up the tripod and camera, it was 10:45. One of the birds was sitting low in the nest. Ten minutes later it left, but was back at 11:05, and stood over the nest.

Then at 11:10 I recorded in my notes that Alpha arrived, but none of the pictures I took show wing tags so I can’t be sure. One of them flew off the nest and the other was perched in the next tree. I was beginning to worry about the cold wind and disturbing them, but at 11:15 one of them returned, shuffled the eggs and settled. 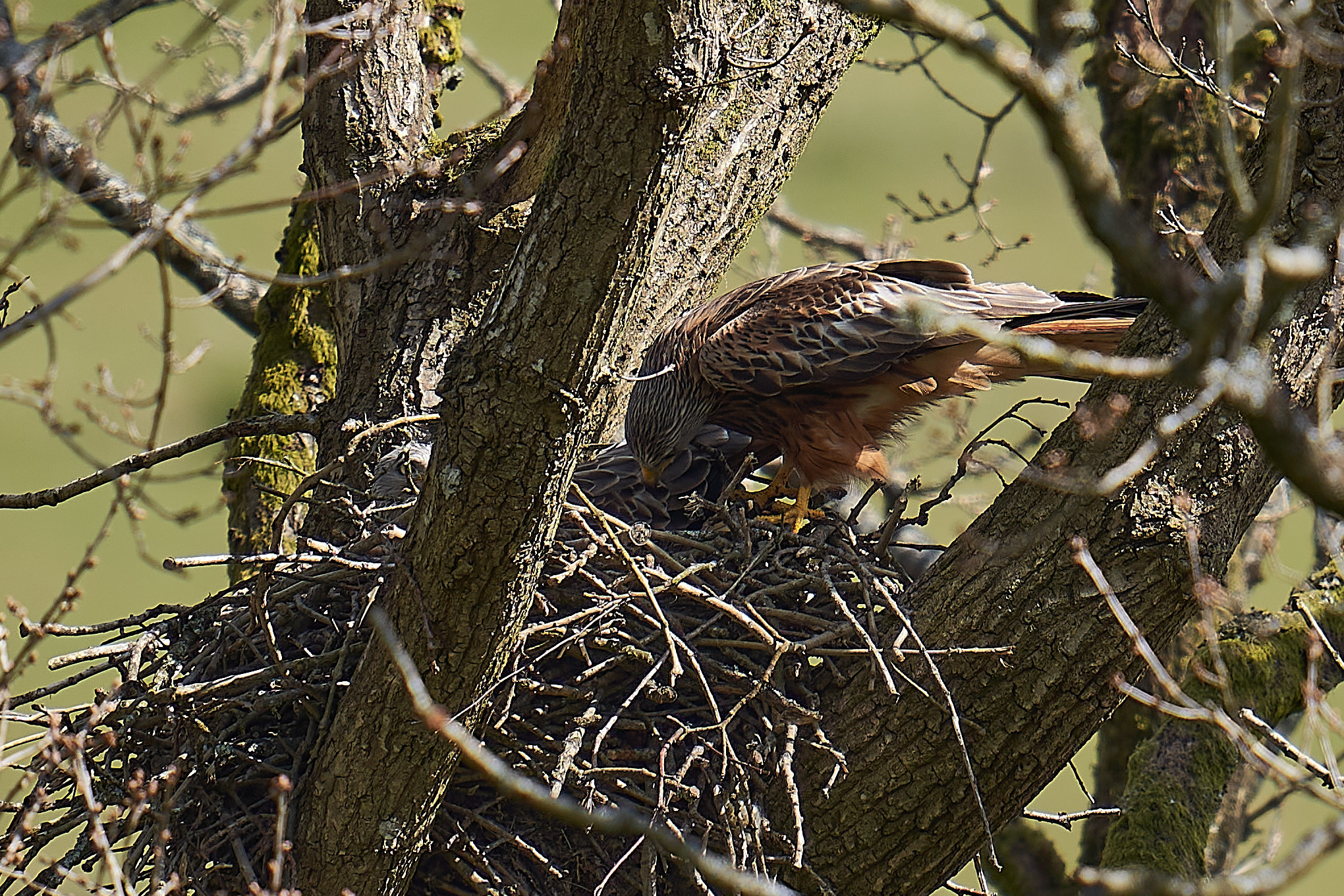 However, at 11:35 another bird arrived and pecked at the one sitting to indicate that he or she should budge. The new arrival then settled on the nest in a different position. I left at 11:45. 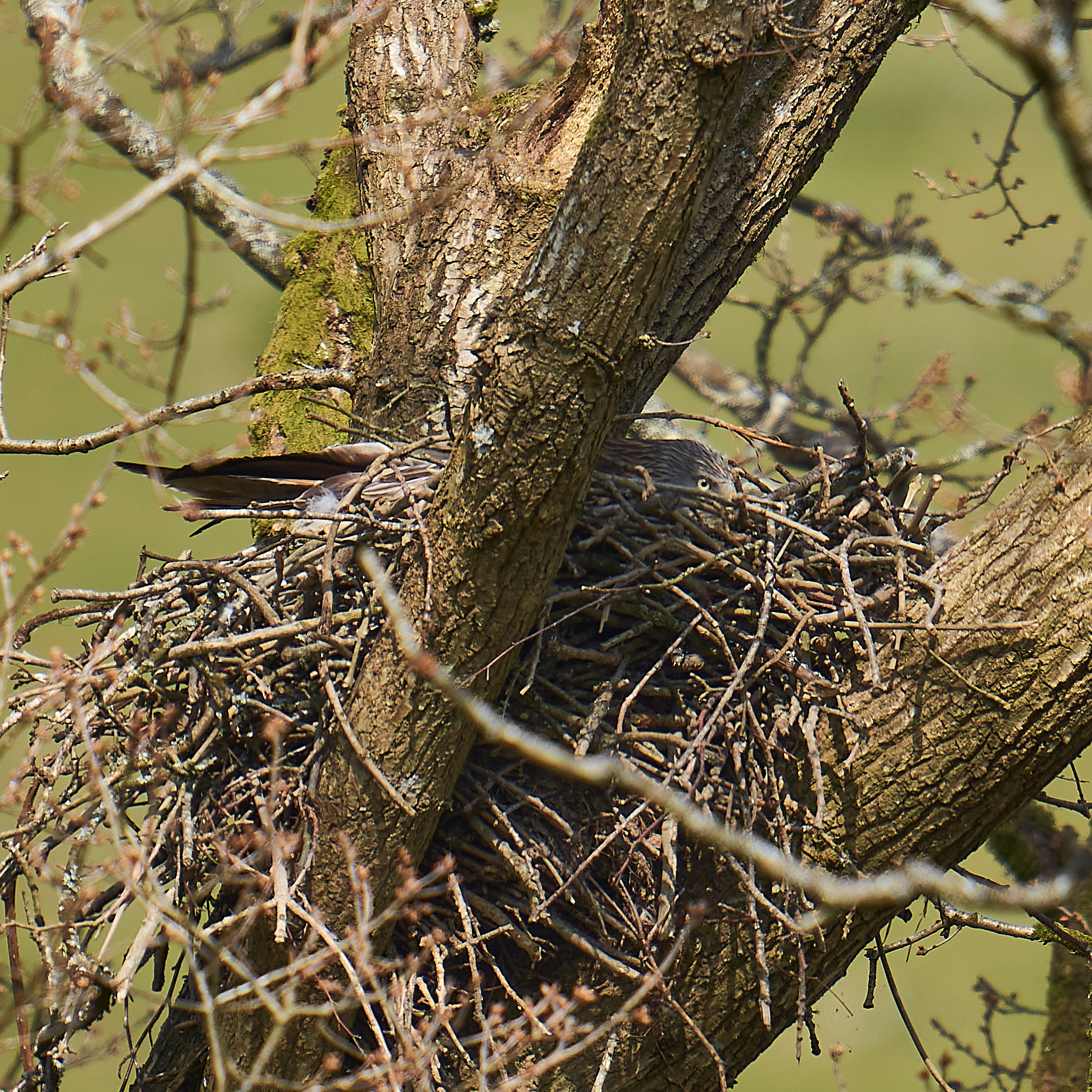 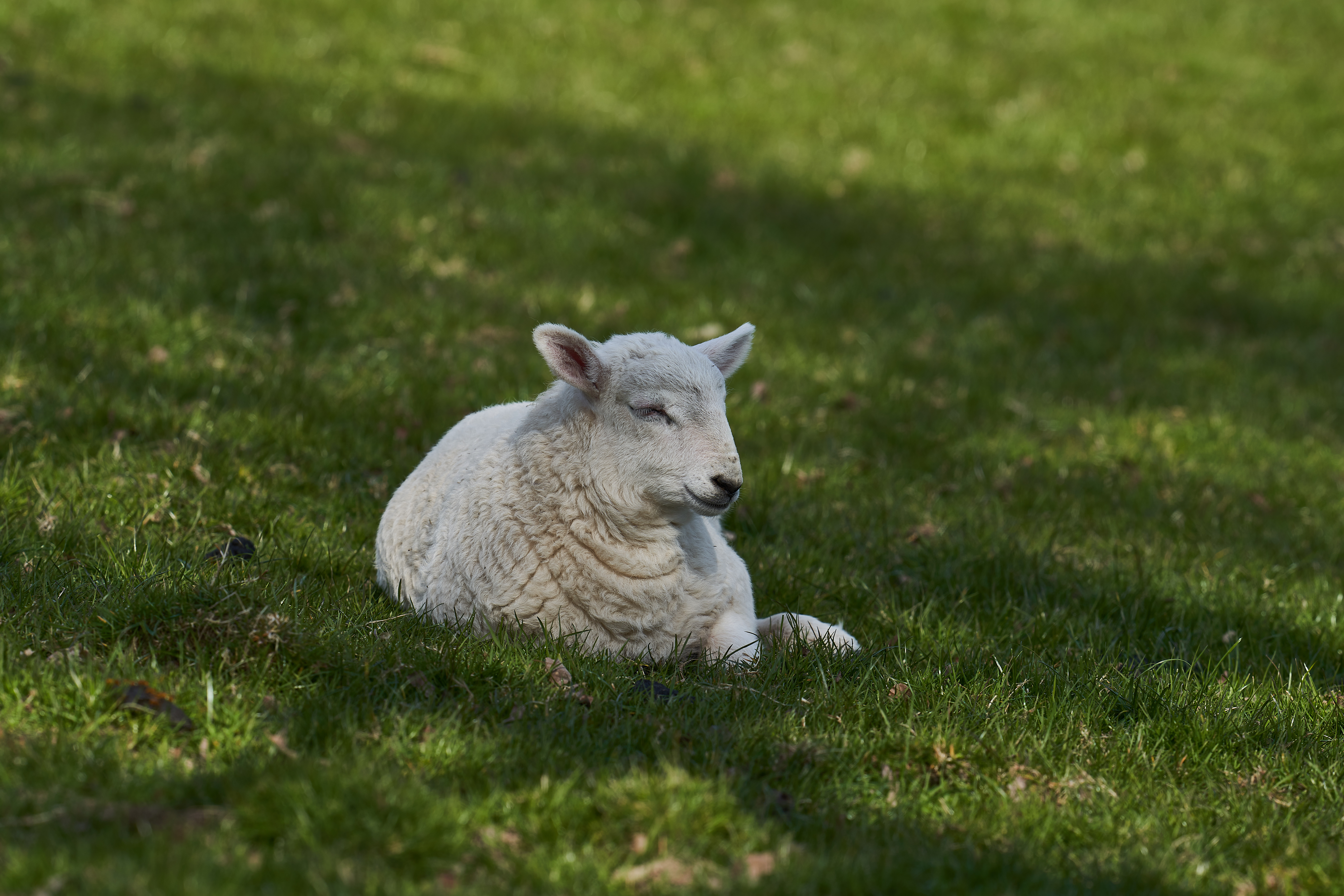 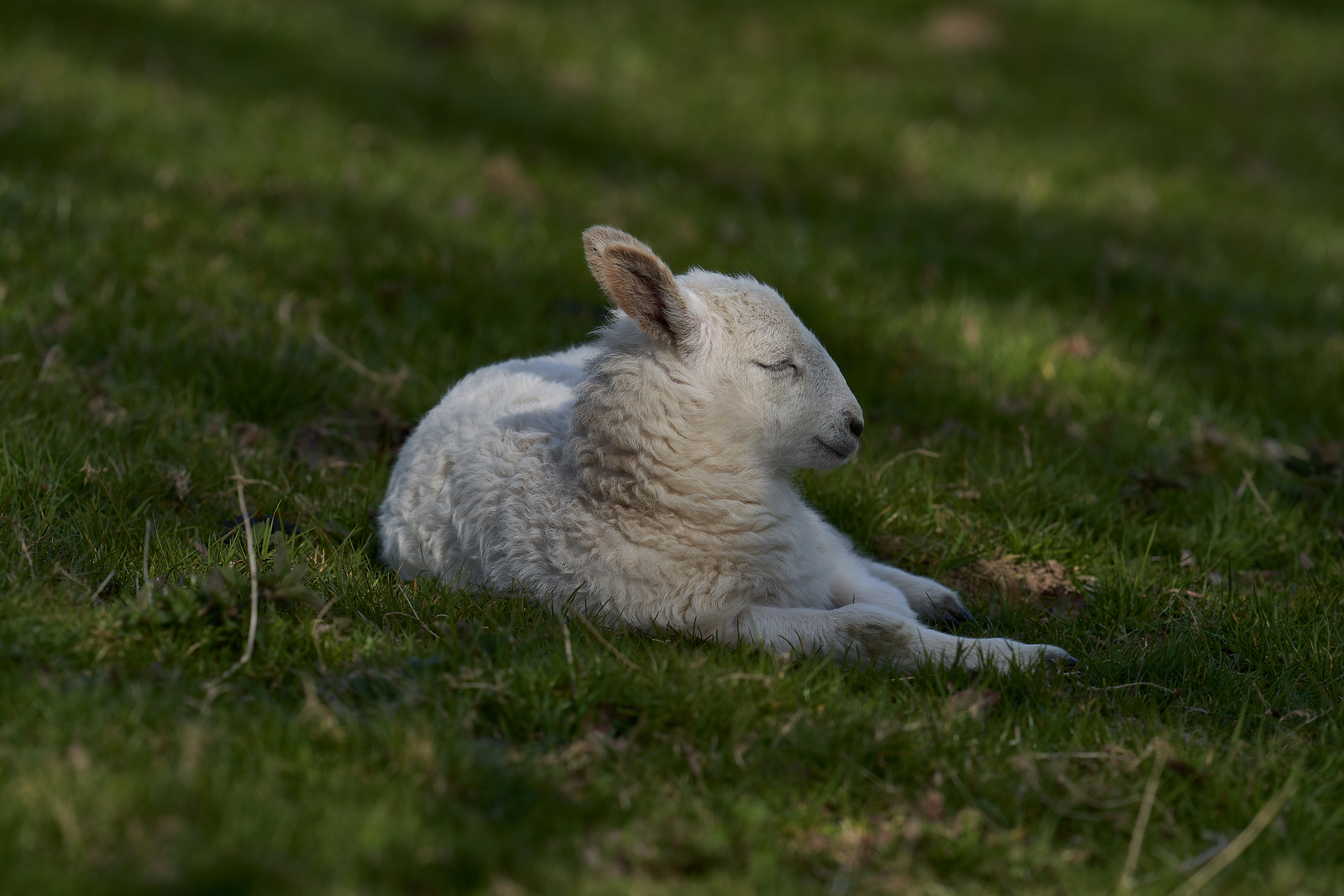 Some very relaxed looking lambs; all seems well with the world. Does the kite looking anxiously around its tree, or the lamb dozing contentedly in the sun, have any idea of how different their life expectancy is? Even if this is Alpha who is already old, she is likely to live three or four times longer than the lamb.

3:28 Looking up.  After almost an hour the sitting bird has moved! 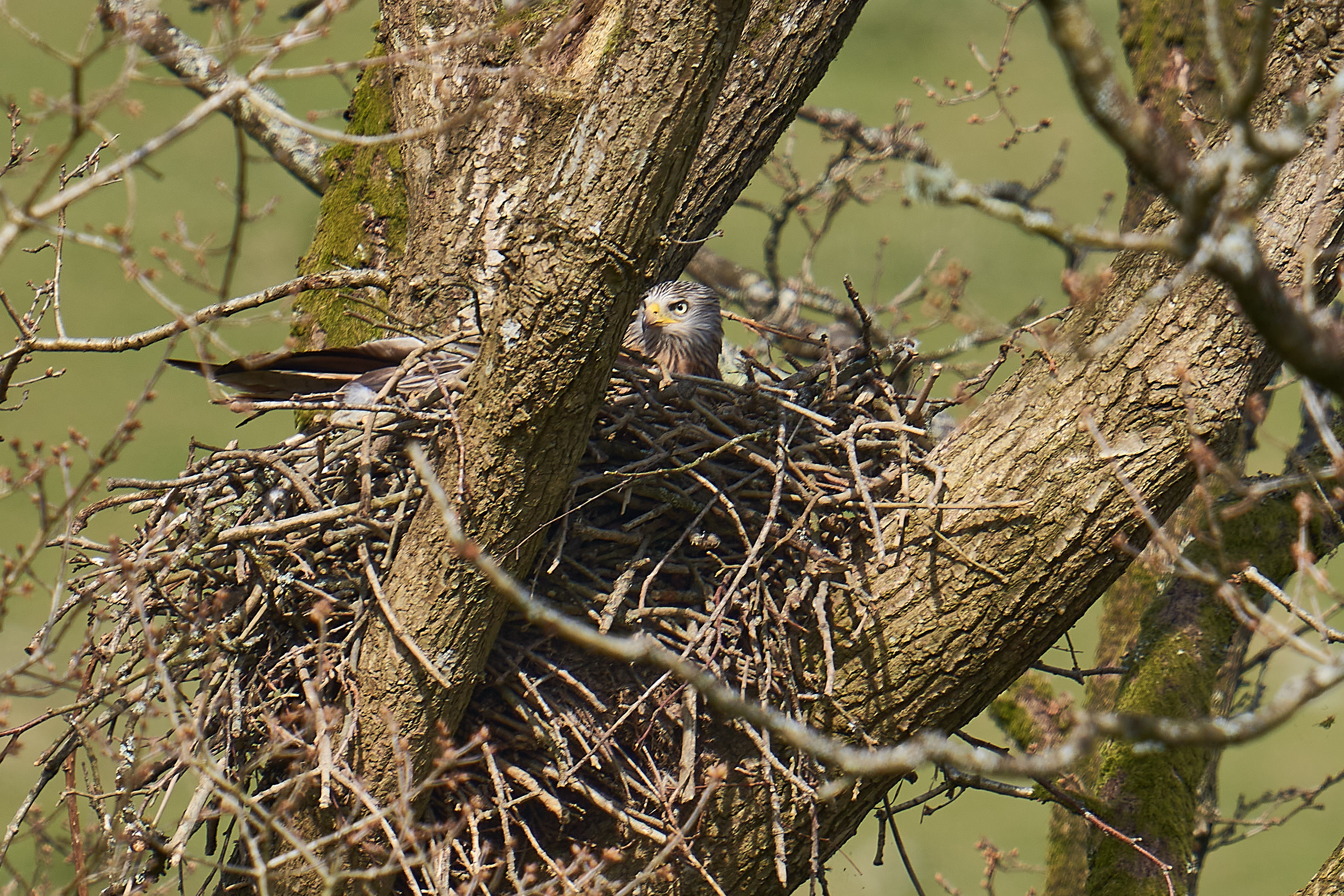 Too much drama; it was time for me to go.

1:45  Aled tells me there has been no activity at the nest in the last few days.

1:50 The nest is unoccupied; no kites in the vicinity.  It’s warm. They could be taking a break.

2:15 No sound but the occasional bleat. No movement but shadows moving in the breeze. 2:25 A crow flies up to its nest in a nearby tree.

2:35 Again a crow moves across the area but nothing else.

The nest has failed. I feel a looming sense of loss, not just for this little bubble of life, but of a long association with this spot and these birds. I so longed to see those little white heads poking up above the sticks again. I so eagerly anticipated those moments of interaction with these spectacular birds as the young developed and the leaves spread around them.

What has happened? The most likely is the death of one of the birds – perhaps the veteran Alpha.