The Season of Disappointment 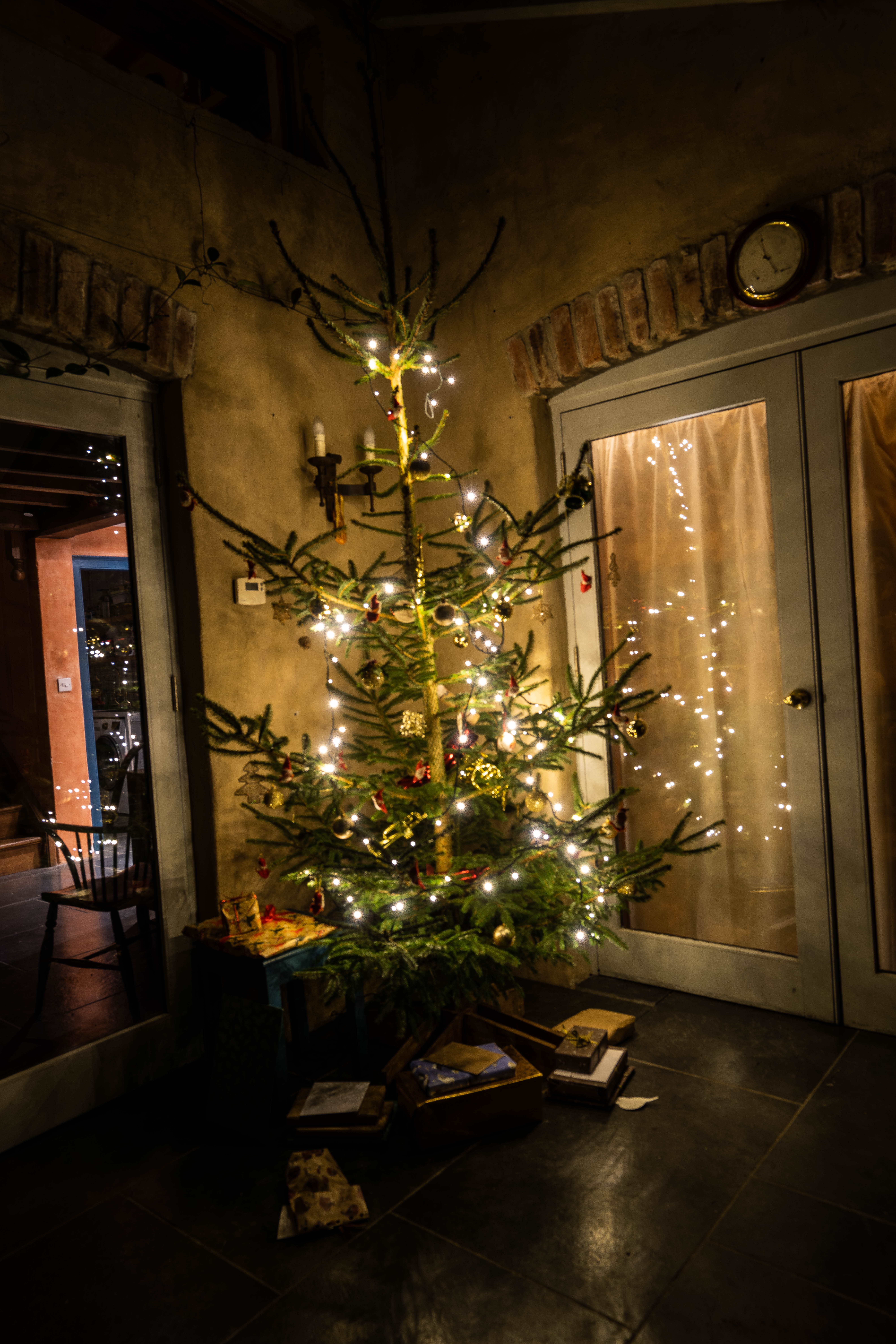 How will you remember this Christmas? The tree that nobody saw? Did you begin the month in hope and end in despair? Misery, grief, or just tedium and boredom?

I had great things planned. I was to spend the best part of a week at Steart Marshes. This extraordinary peninsula seaward of Bridgwater is the biggest of the Wildfowl and Wetlands Trust’s reserves and a pioneer in new flood management techniques. At low and neap tides it can be very disappointing – acres of uninhabited mud – but the December spring tide, when the whole area would be flooded, was predicted to fall around  the 17th My aim was to study and photograph in particular Short Eared Owls, and I was promised as much help as I needed from the staff in exchange for records and pictures.

In theory I could have gone, but it seemed against the spirit if not the law of the lockdown rules in Wales and the restrictions in England. Instead I concentrated on trying to increase the list of birds coming to our feeders, and setting up  disguised viewing areas from where I could photograph them. I set up two feeding stations in the “orchard” area of our garden and a screen with a bench seat to enable me to photograph whatever turned up. To attract raptors I bought a pack of frozen day-old chicks, a few of which were prominently displayed. I expected first Jackdaws, Crows and  Jays and hoped their movements would attract Buzzards, Kites and even a Sparrowhawk. The wretched little yellow corpses were completely ignored, until one or two were taken at night, presumably by the neighbours’ cats which dominate the night time videos I have taken with a trail camera.  I did however get a few interesting pictures of the Sparrows, Nuthatches and Starlings.  With only the prospect of more of the same, I gave up the idea in the end and took down the extra feeders and the screen – a fitting seasonal disappointment. 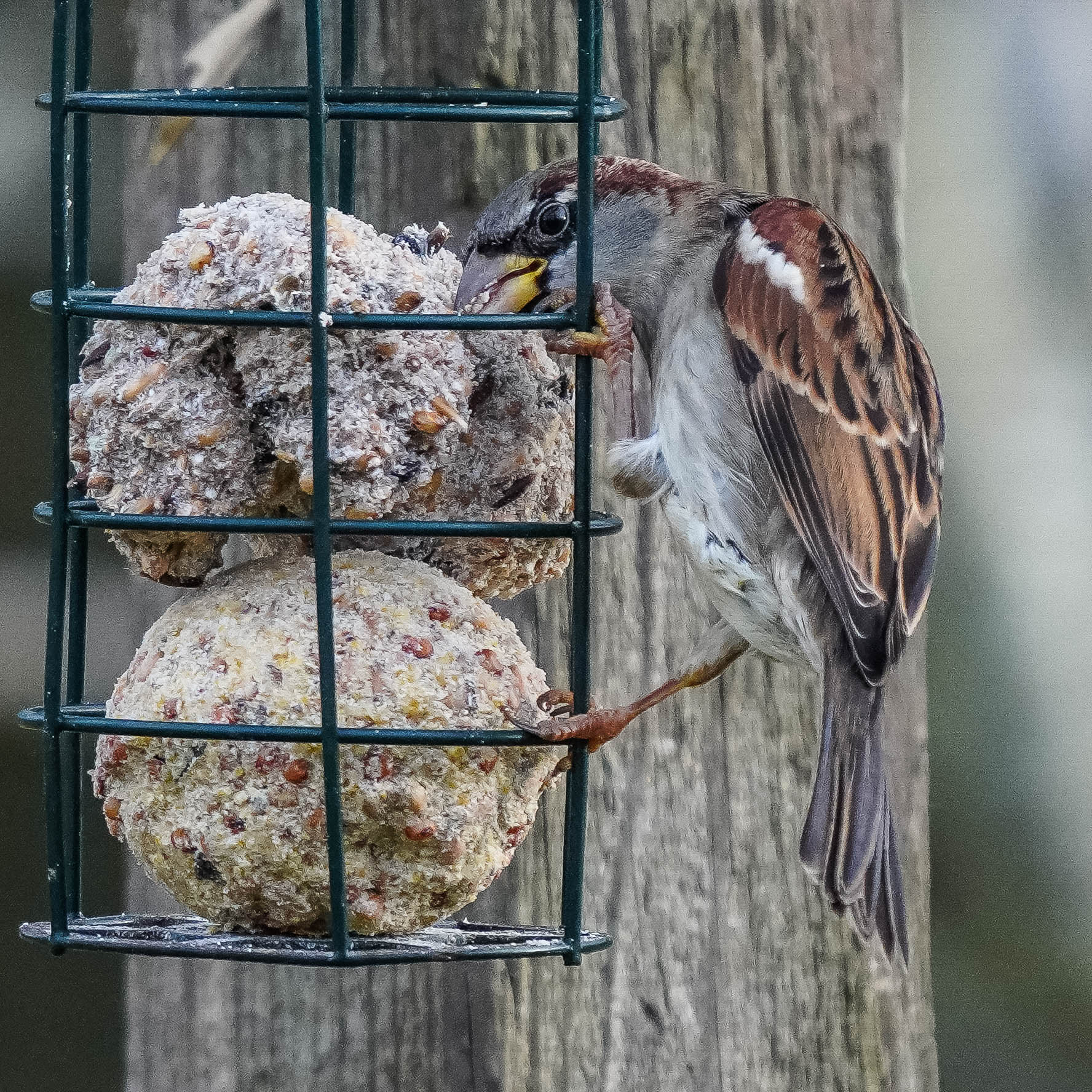 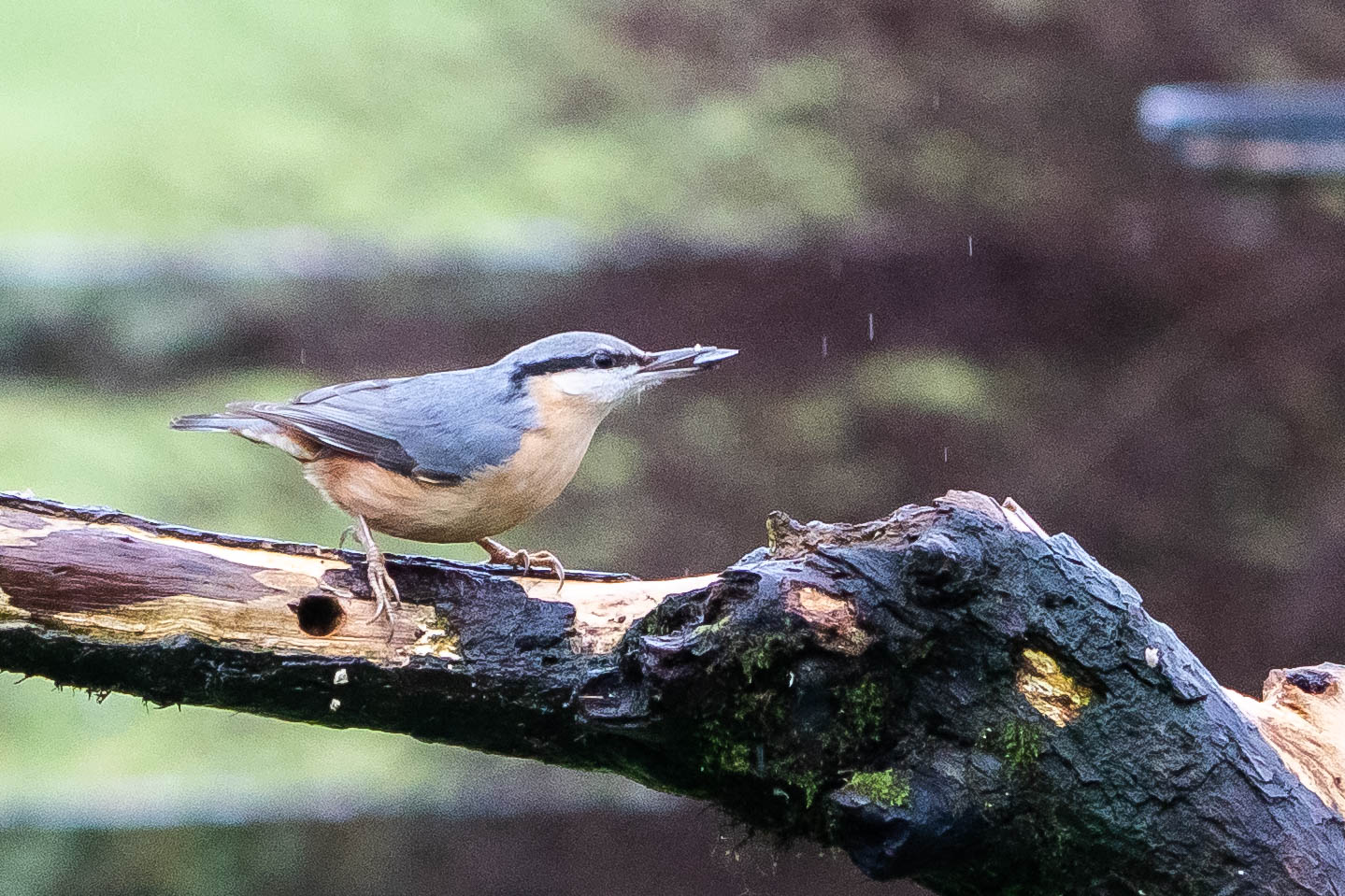 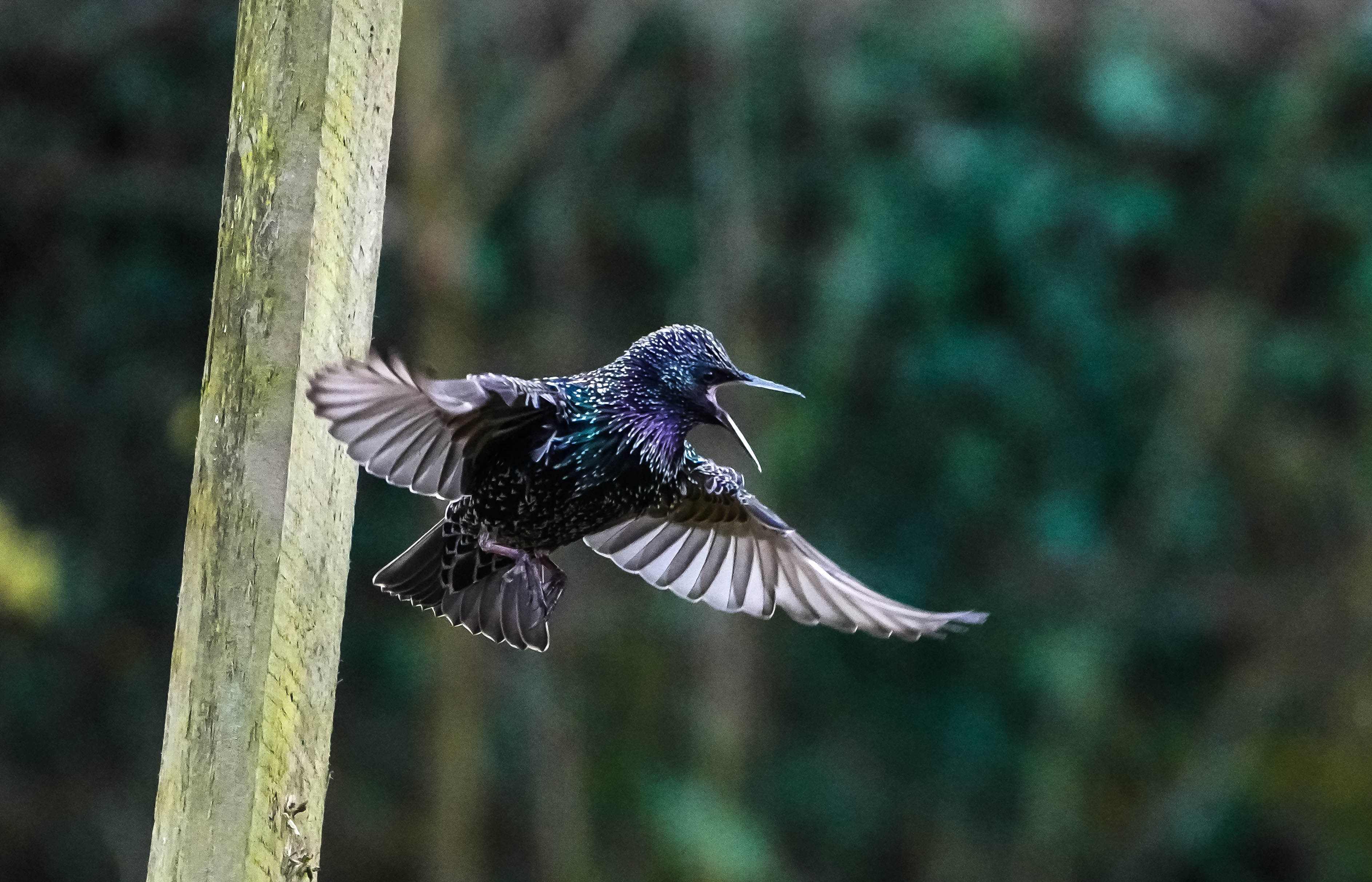 Maddened perhaps by the constant rain, thinking of my bucket list and sorely tempted by one of the iconic big telephoto lenses produced by Sony, I negotiated a deal with the Camera Centre in Newport. Here are a few of the shots I achieved with this lens over the weeks that followed. If you are interested in how a 400mm f2.8 lens works I will cover this in a separate post. 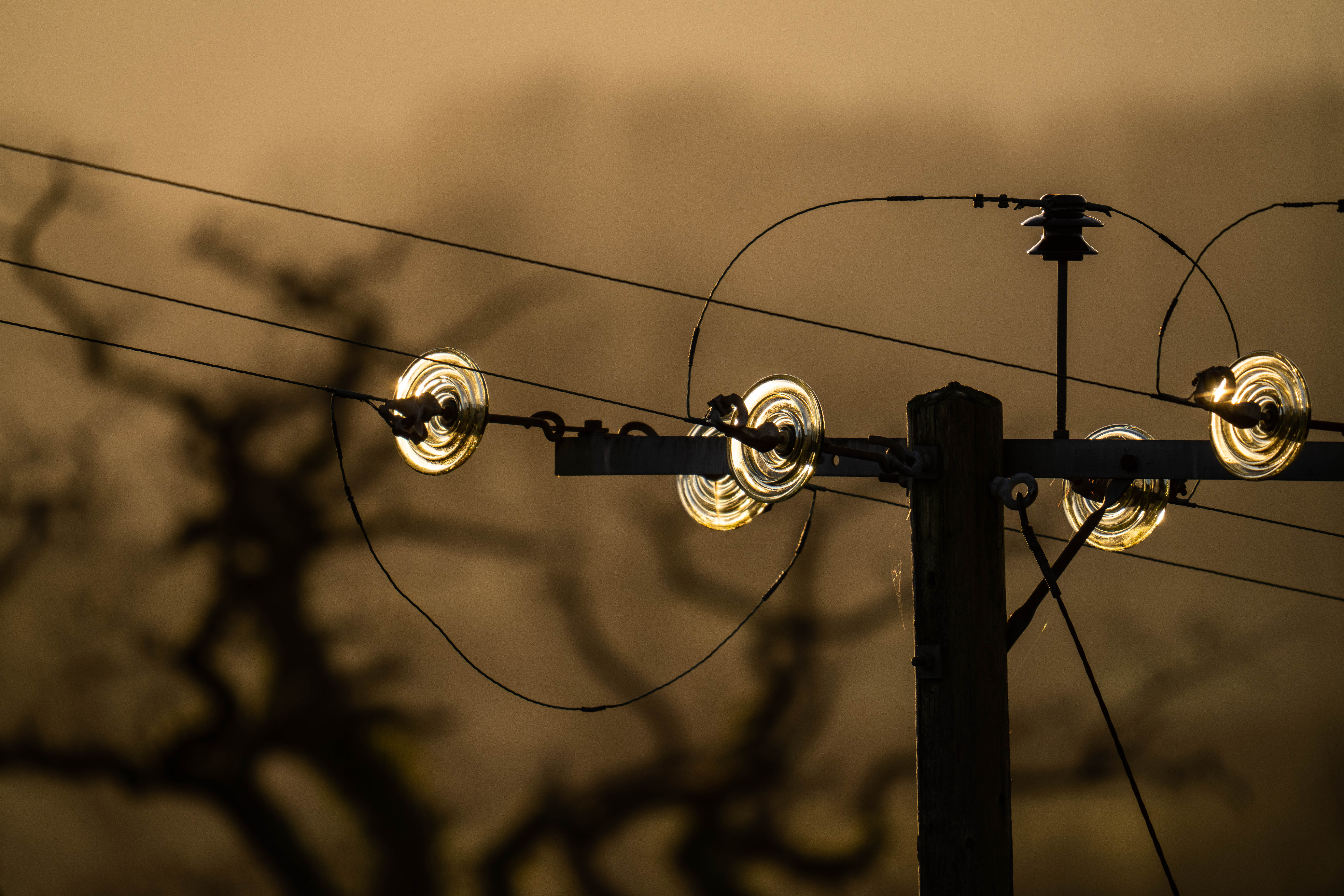 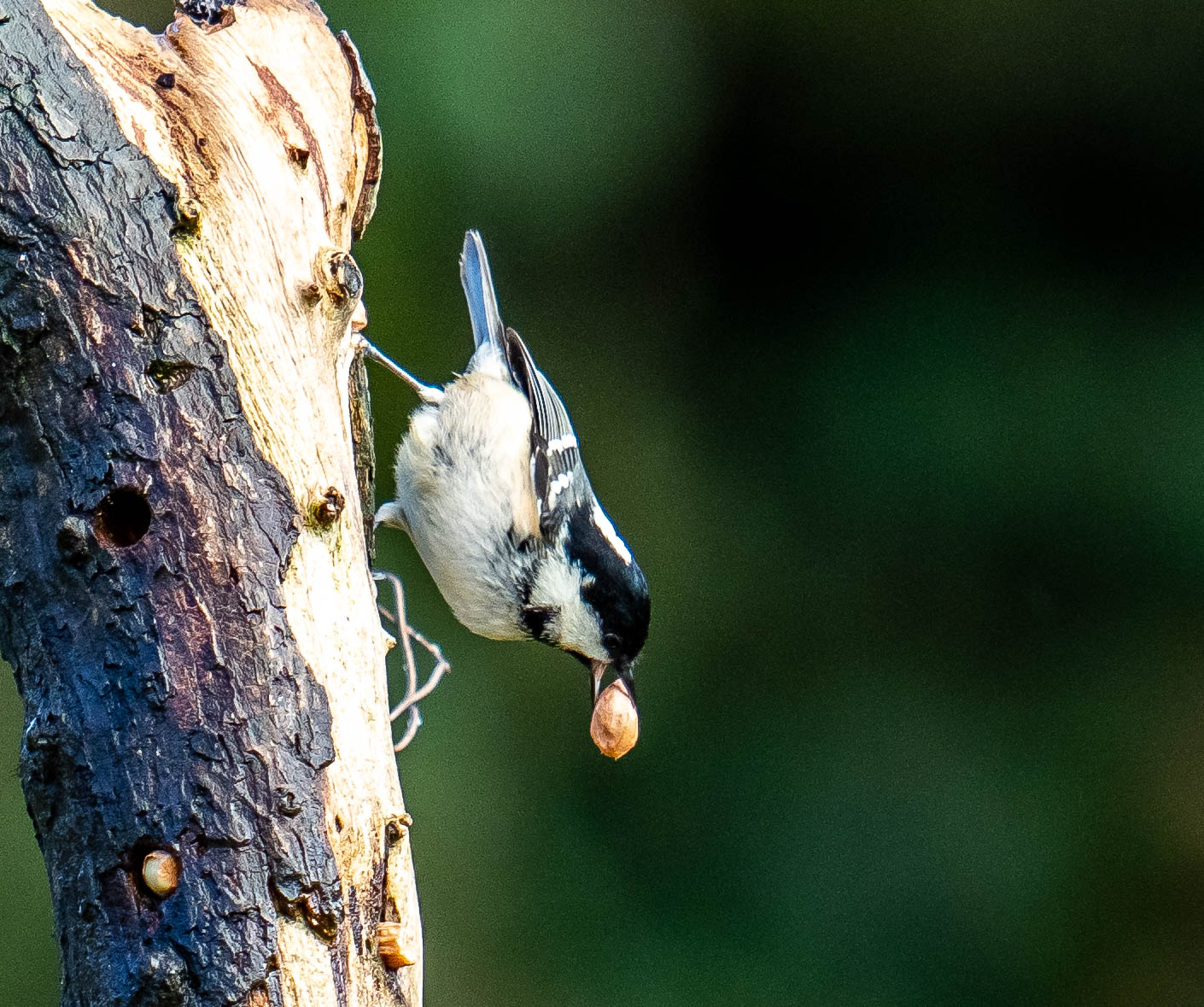 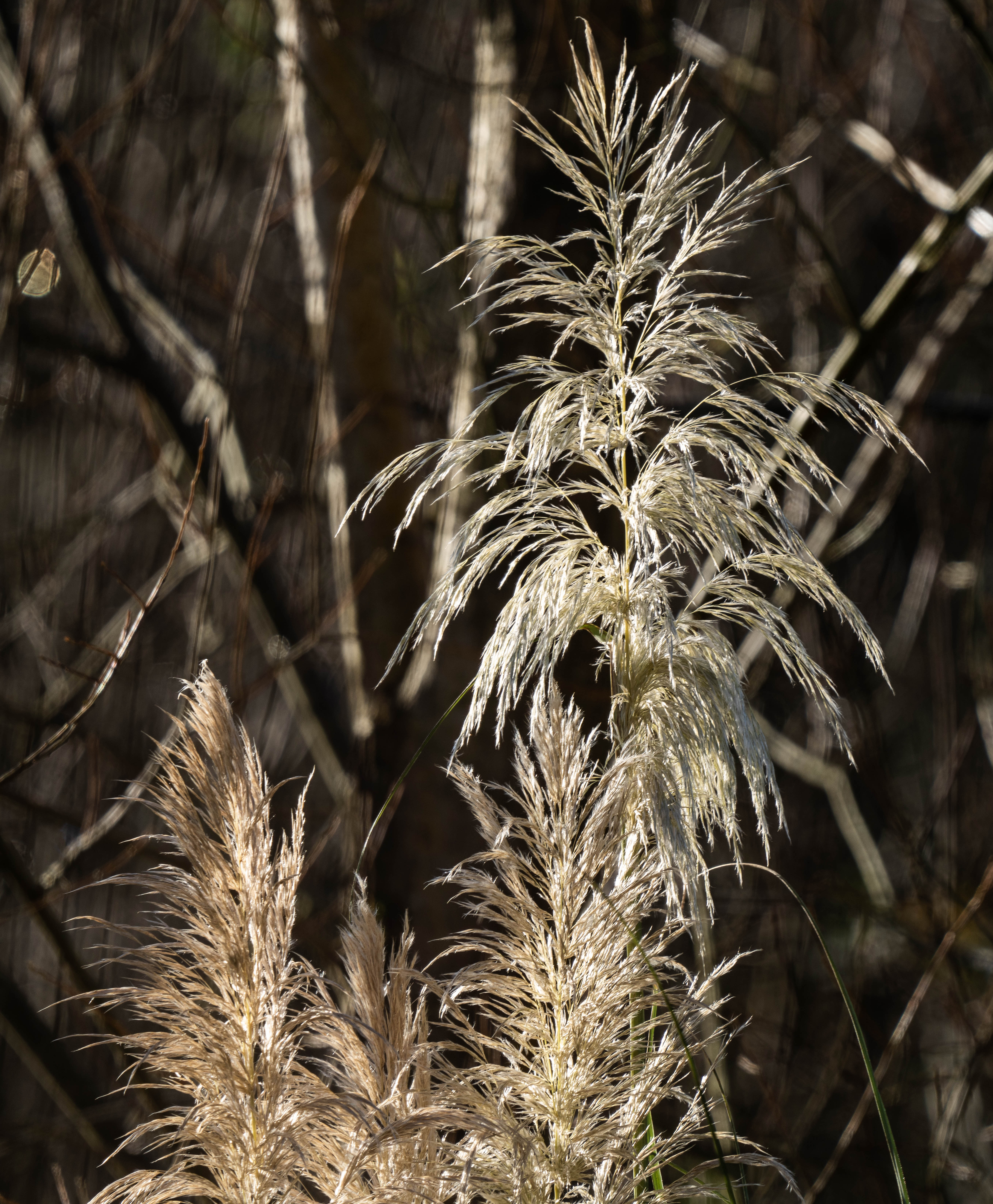 I particularly liked this close up of two tiny drops of water which picked up the low sunshine: 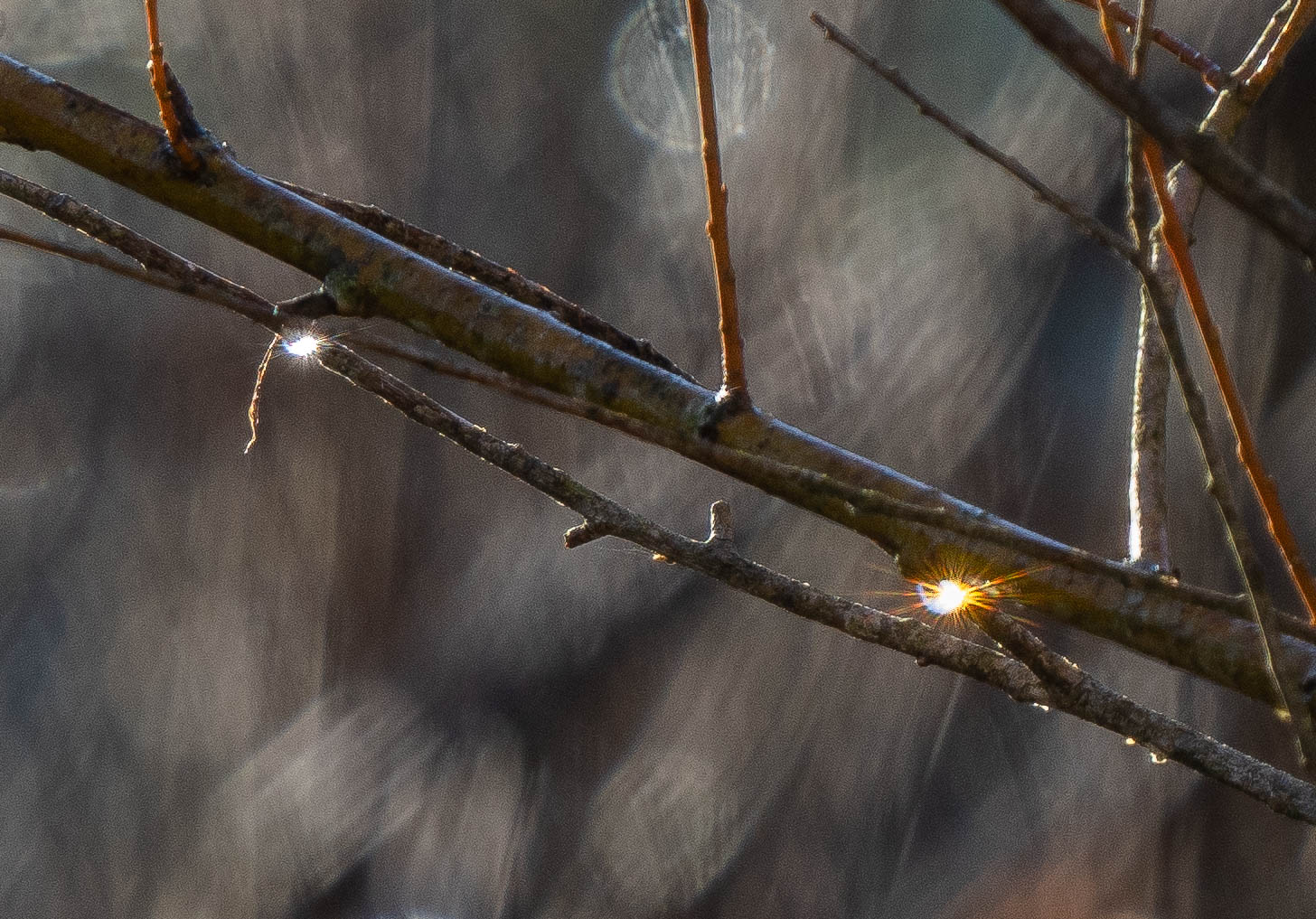 Suddenly, around the 17th there was a window of fine weather with no travel restrictions. I decided to do a day trip in the car to Slimbridge, and had the idea to ask my daughter Hannah to join me there. The pictures were mostly disappointing, partly because I had a focus setting wrong when shooting birds in flight. Some of the long distance shots though were impressive. This Barnacle Goose was 300 metres away, and the Golden Plover even further. This picture was just a small part of a huge flock. 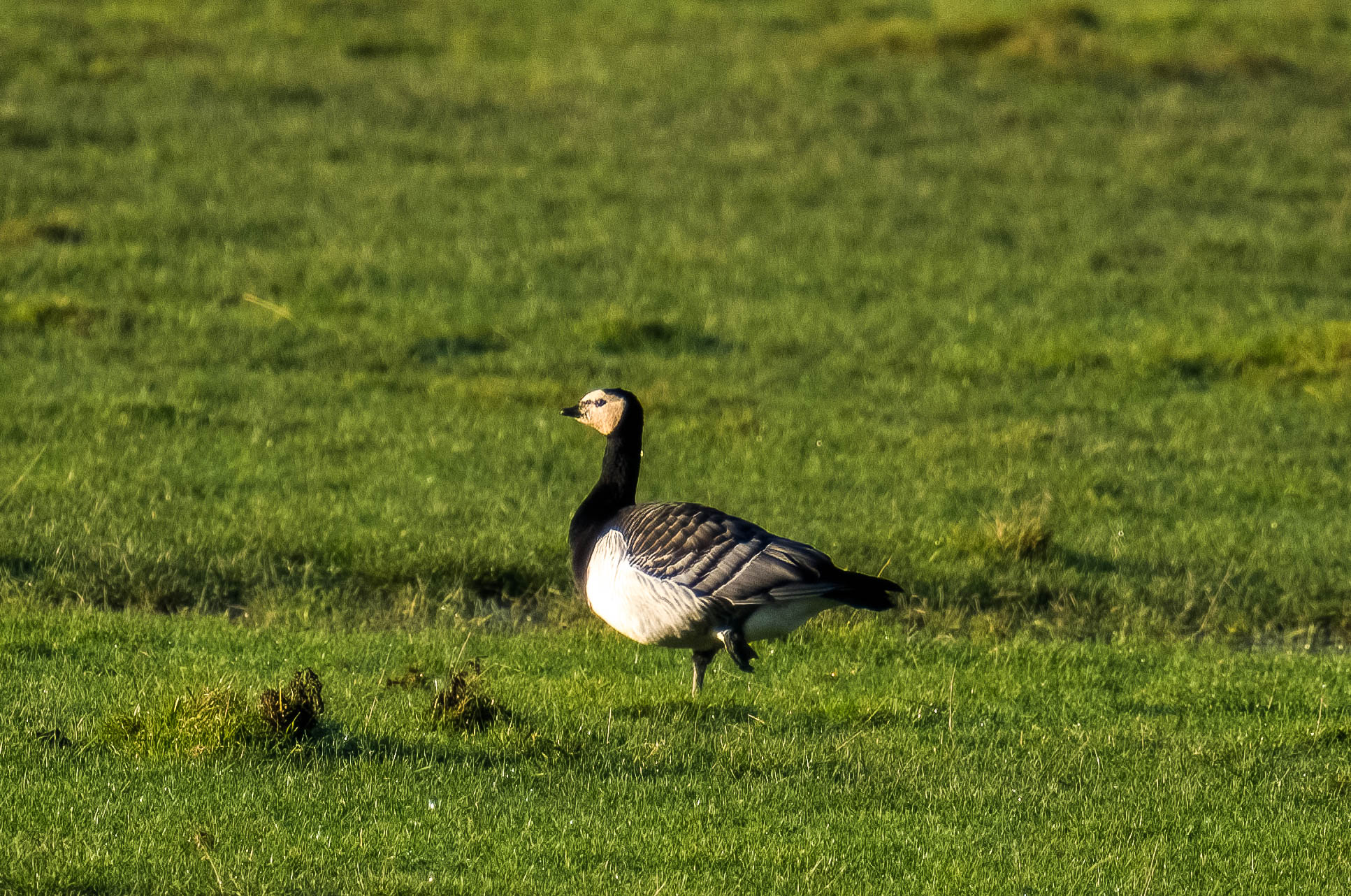 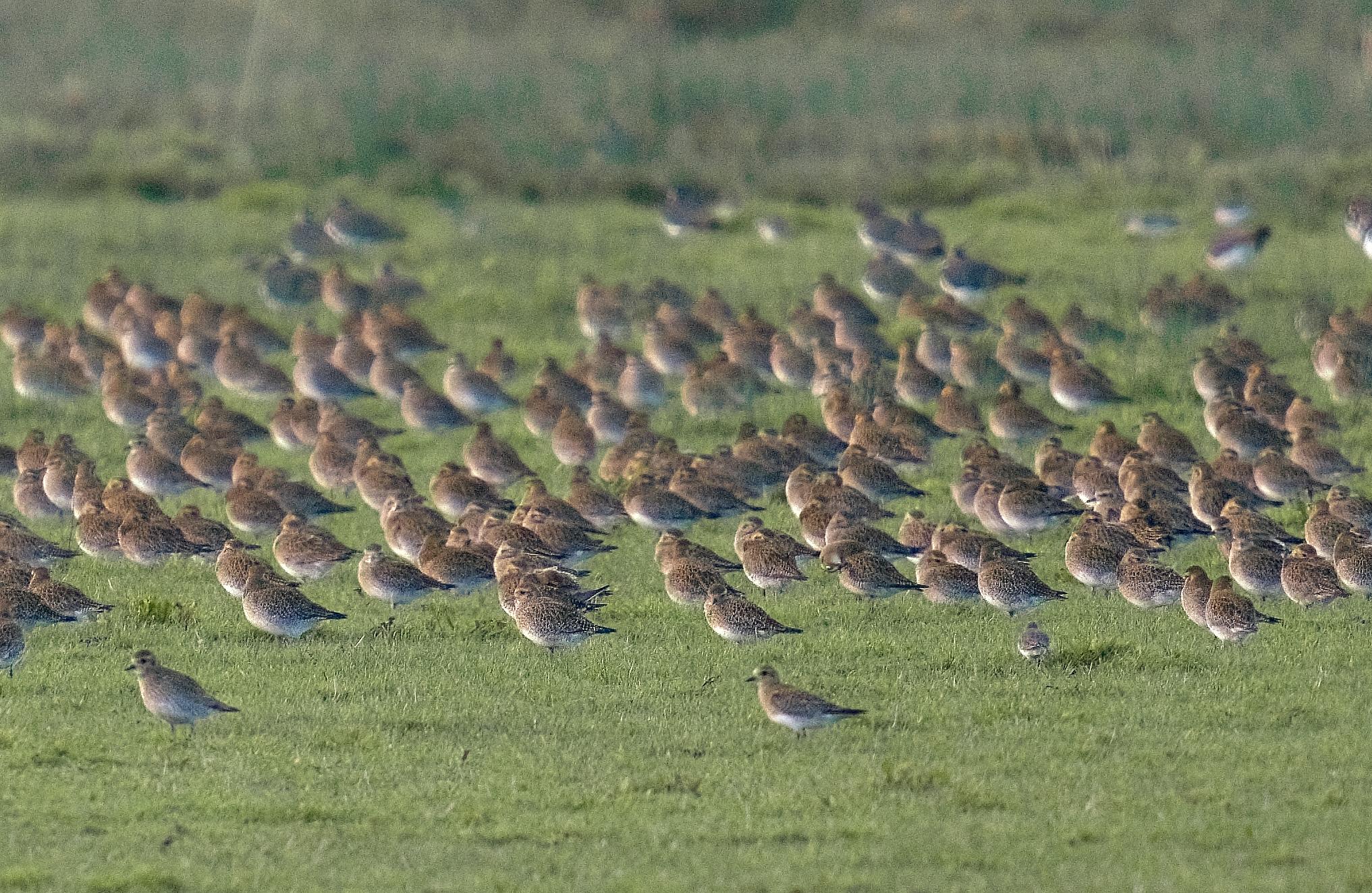 It was wonderful to spend the day with Hannah doing something we both enjoyed. One day I hope to do the same with my other daughter, Natalie. As things turned out it was the last chance of this disappointing year to hug my closest relative.

Later in the month I returned to some of my spring lockdown favourite local places. One, further up on the Towy involved hacking a 500m path through the brambles which had grown up since my last visit. Laden with camera, lens, tripod, pop-up hide, and machete it was worth it. As soon as I got the hide set up this young Cormorant appeared, and spent the next 20 minutes preening and drying off his feathers. (Curiously cormorants can’t waterproof their plumage with oil like other sea-birds.) The low sun was directly behind him which made for some interesting light effects: 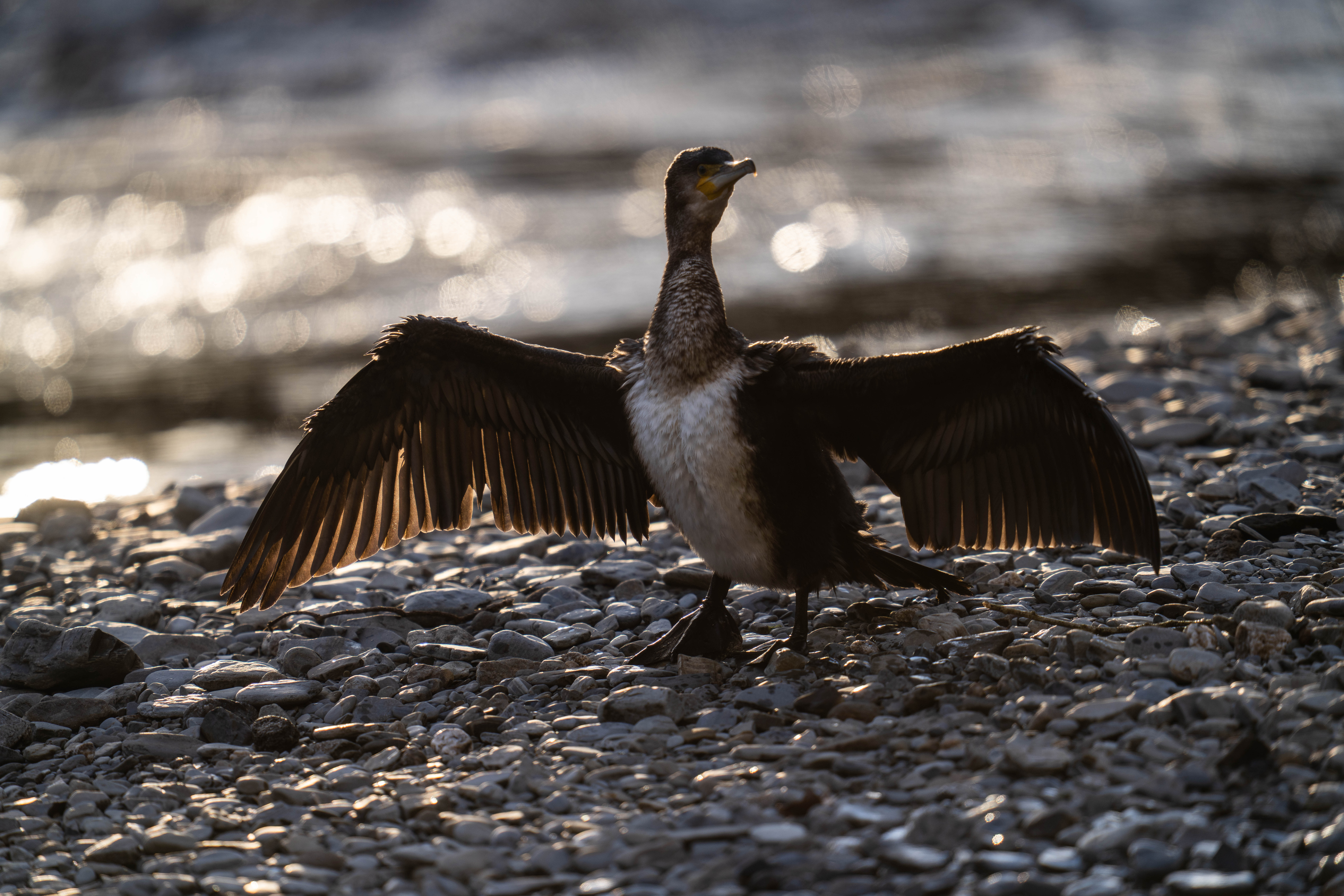 After Christmas the rain began to recede and I went in search of the flock of Redwings which spends the winter around the old Neuadd. I had seen them nesting in Iceland where they are quite approachable. Here though they flee at the first sight of people so are difficult to photograph. Are they different birds of have they learnt to behave differently? 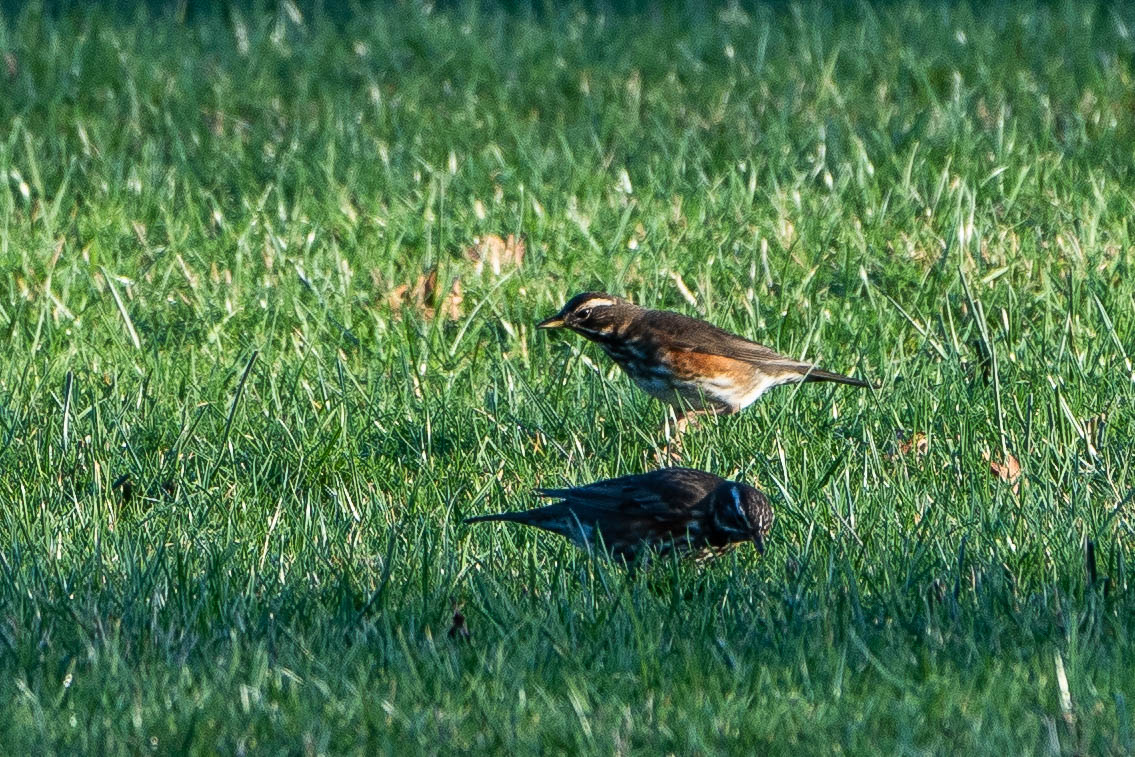 The Gwenlais valley past Penstacan is gorgeous in the other seasons, but in damp cloudy winter, uninspiring until I got to a clearing above the forestry and could look out over the Towy valley. Could be worse! 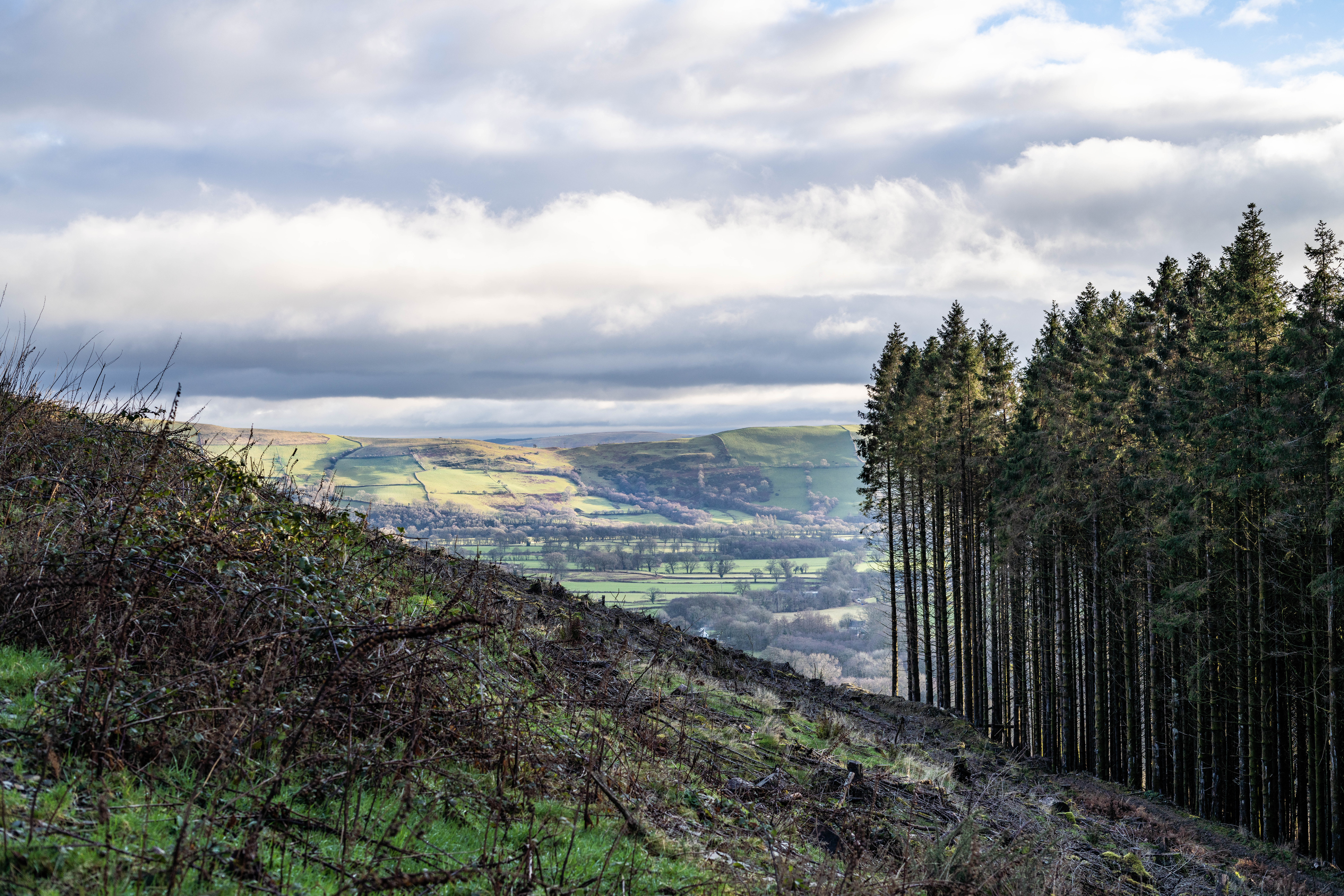 This entry was posted in This Domestic Life, This Wild Life. Bookmark the permalink.