The Wild Man and the Data

I am a wild man, tangled hair unwashed for 6 days; tea with milk just about to turn and slightly acidic; straight out of my bunk and into my clothes. Actually I’m cheating. It’s not that wild: the heating has been on low during the night!

I watch the voltometer in the van avidly. It tells me the state of the batteries. 11.5 volts – not good. If it drops below about 11.3 I need to run the engine to give them a boost. The solar has done well up to now but there was little sun yesterday. The biggest drain comes from the fridge, the ignition for the gas hot water and the same for the heating. The fridge is on its highest temperature setting, both heaters are running on thermostats so every time they switch on, the voltage dips a little.

Today our job is monitoring tree growth and dispersal in an area of light deer browsing – it’s been fenced off but a some deer have got in. We set off up the track in the firm’s mini-bus, a Ford H2 L3 all-wheel drive with much better suspension than mine, but it’s still a rough ride to the gate at Affric Lodge. The tall wooden gate is secured by a necklace of locks all strung together with short lengths of heavy chain. Each lock has its own code or key, so several different key holders can share the track. Problems arise though if one lock gets short-circuited.

We walk along a decent track for 45 minutes, reach the site and sit down for a coffee break. We then split into two teams working two transects 100 metres apart. Every hundred metres we put a pole in the ground and then measure out 5.6 metres. I tried pacing it and to my astonishment got it exactly right. One person holds the tape at the pole and the other scribes a circle. This radius will give us a circle of exactly one hundredth of a square kilometre. Being pretty much innumerate, I accept that I will never know how a hundred circles can fit into something square! As the end-stop walks round, the others – spaced out along the tape -count each tree as the tape passes it and report to the recorder who stands with a clipboard making records. We make estimates of tree height, tree cover, potential growth and type of site. It’s a very welcome change from planting and gives me a chance to take some video. One of my ideas was to record interviews with some of the group talking about the experience. Most were interested but not keen enough to volunteer. After a relaxed lunch Dom suggested I try again. Marius and Alan volunteer: (This is where I intended to show the video, but even greatly compressed this site refuses to accept it. More research needed.)

I also get the chance – thanks to Rachel pointing it out – to get a clear identification of a very common plant here which I have seen nowhere else, the Bog Asphodel. It has three stages, all neatly illustrated here. The bright orange fruits were apparently used as a dye in Shetland. The pale version on the right is the last one when the seeds have dispersed.

Another common plant here is Tormentil, which I’d never seen before. We didn’t see many flowers, but the leaves are everywhere, some of them now bright red: (stock picture) 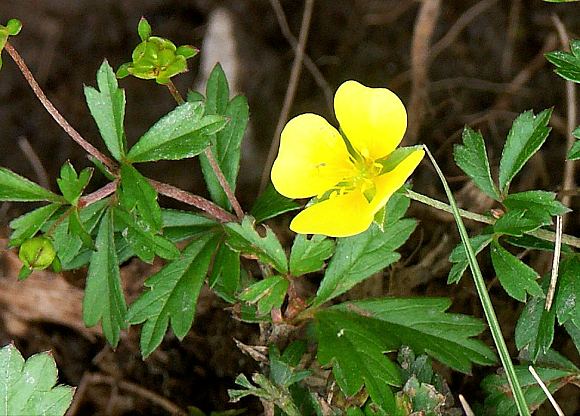 It’s an easy day with only a few circles to do after lunch. As we walk back Nigel is scathing about the process:

“We know what the problems are and we know what has to be done.” He has a point but I argue that data collected in a systematic manner over several years is real evidence. A series of approximate records gives in the end a true picture of what is happening on the ground. I should add here that even on the open moorland where the deer prevent any growth above about 30cm, the vegetation is much more varied than on our sheep-ravaged uplands in Wales.

Cloud builds up during the day and it’s cold when we get back to camp. I’m beginning to wonder if the gas will hold out and have decided to turn off the water heater until I get back to internet land.

1 Response to The Wild Man and the Data