For our physical and mental health at this time of crisis, we are encouraged to walk run or cycle in the areas close to where we live once a day. Although all our public rights of way are open, there seems to be a prevailing fear that using the footpaths will risk the lives of the owners and tenants of the land crossed by the paths.

My natural bent is to get as far away from other people as I can. I love the wilder places where I can get some feeling for the dense network of non-human life that surrounds us but always seem to keep us at arms length. There are in the upper Towy valley still some winding wooded valleys, wide open uplands, moss covered rain-forests and secret woodlands of gnarled sessile oak. It would be hard to imagine places less likely to harbour a virus that can only transmitted by humans, but people are afraid and I respect that fear, so, in the next few weeks I will be engaging with a new experience – walking the network of lanes and back-roads within reach of my feet or my bicycle.

This is the second of such outings, and it began a week ago with a route from the town to home which I had cycled before but never walked. On one of our rare trips to the local shops for groceries, I left Thelma at the edge of town and was soon walking along a completely traffic free lane in cool bright sunshine. Resolving to observe rather than photograph, my camera was packed away in my little rucksack. A hush had settled on the landscape, one I’d never heard before in this settled area of farms, scattered houses and roads. I trod more carefully on the tarmac to mute my footfall and listened to the birds shouting out their messages of lust and territory, scanning with binoculars for movement in the still bare trees and rapidly greening hedgerows.

I came to a fork. To the left the road snaked round a small wooded hill and above it two buzzards circled and tumbled, sparring. They were joined by two kites who seemed to drive off the buzzards and claim the territory. I noted a possible kites nest site, but my route took the right fork. Half a mile further on I approached a small band of trees and a buzzard flew out mewing plaintively and circling me. This was certainly a possible nest site and was noted.

After an hour of this slow walking I came to a high point and found a place where I could sit and enjoy my mid-morning coffee and biscuit. It looked out over a familiar mix of sheep pasture and patches of woodland. It’s beautiful, but as usual in our sheep-dominated landscape, few birds and no other animals. A pick-up truck drove slowly past – the first vehicle.

A few hundred metres further on I came to one of the many half-abandoned chapels in this landscape. It’s beautifully proportioned and positioned. As with most it has, on the left,a cottage for the preacher or the teacher. I took some phone pictures – “CWMSARNDDU BAPTIST CHAPEL” – the “valley of the dark causeway”. The date 1926 on the wall must be the date of the plaque because it records, in English, “Erected 1814, Rebuilt 1858, Rebuilt 1876”. Though the community it served would have been Welsh speaking, it was considered proper then for official signs to be in English. Now the reverse is true. Although everyone speaks English, it is considered proper to have all signs in both languages. It’s hard in our secular, interconnected world to imagine the intense emotion gathered together in places like this. Revivalist preachers were the pop-stars of their day, the chapels their community centres. 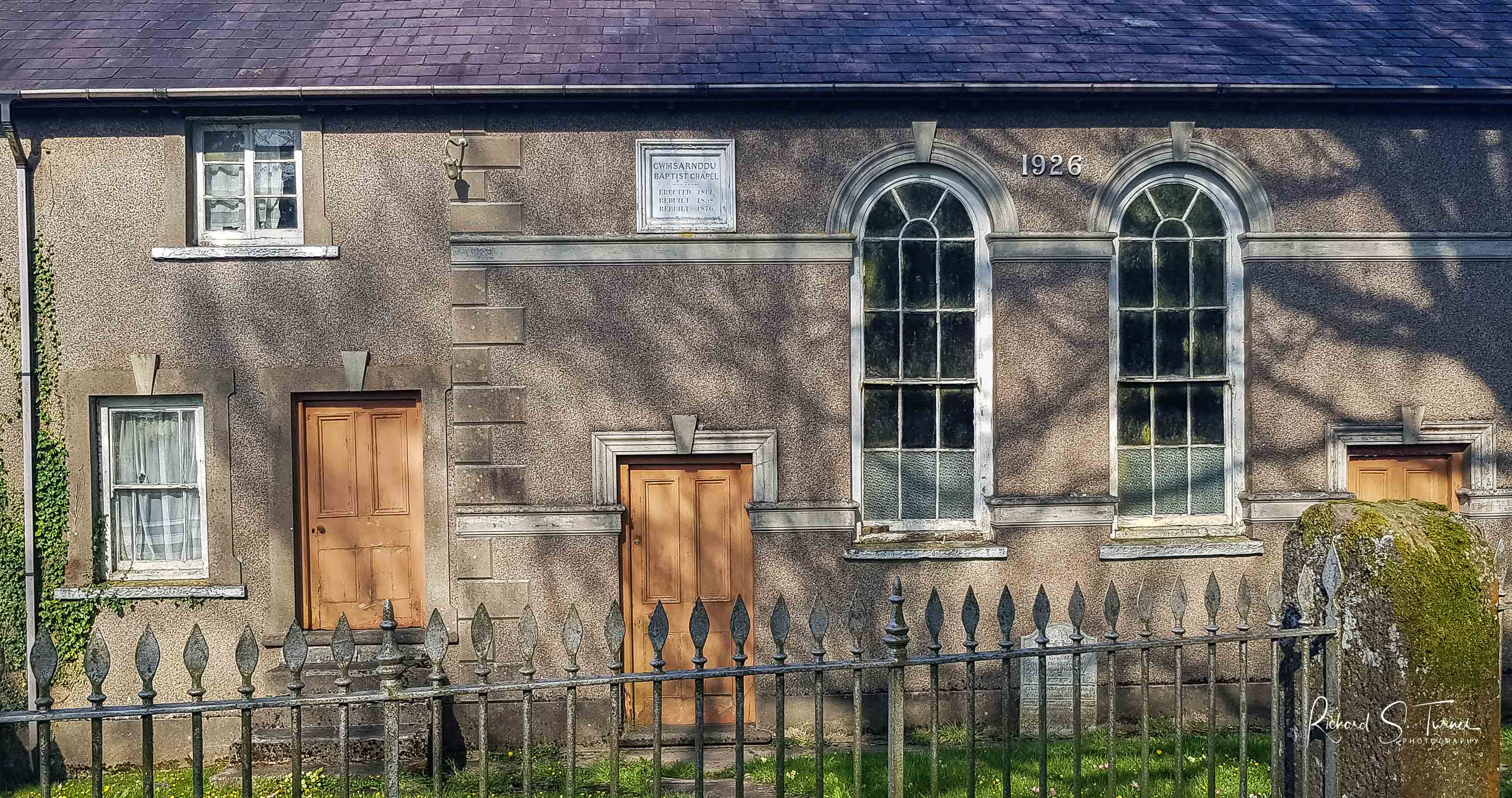 Walking down to a B road I know well, a lycra-clad cyclist whizzes past, head down. I wish they would ring a warning bell before passing. Hearing nothing I could have turned into his path and we could both have been seriously injured. Over the bigger road and up another smaller road I look down on a wild area I had hoped to get to know better this spring.  There is a footpath down to lake surrounded by scrubby wetland and trees. “Maes-y-gwaelod” it’s called – “bottom ground”. I scan it carefully but see nothing of particular interest. Soon I am in the much more familiar lanes leading to Cilycwm. It’s been a 5 mile walk and a good start to the study of the lanes.

This entry was posted in This Domestic Life. Bookmark the permalink.

5 Responses to Walking the Lanes