If you travel by road across the South of England from Poole to Portsmouth, most of the journey is a tangled mass of big heavy roads and big heavy traffic, lined by miles of dreary suburban development built to house the bloated populations of these overgrown cities. Yet there is one section where the houses stop and suddenly you are in a different world. On every side and as far as you can see is one of the most precious and beautiful habitats in the UK: heathland. It’s the northern end of the New Forest, and somehow it has learnt how to be itself alongside millions of people. I have just come from another such area: the Arne peninsula on the west side of Poole harbour. If your thing is landscape this is your place. 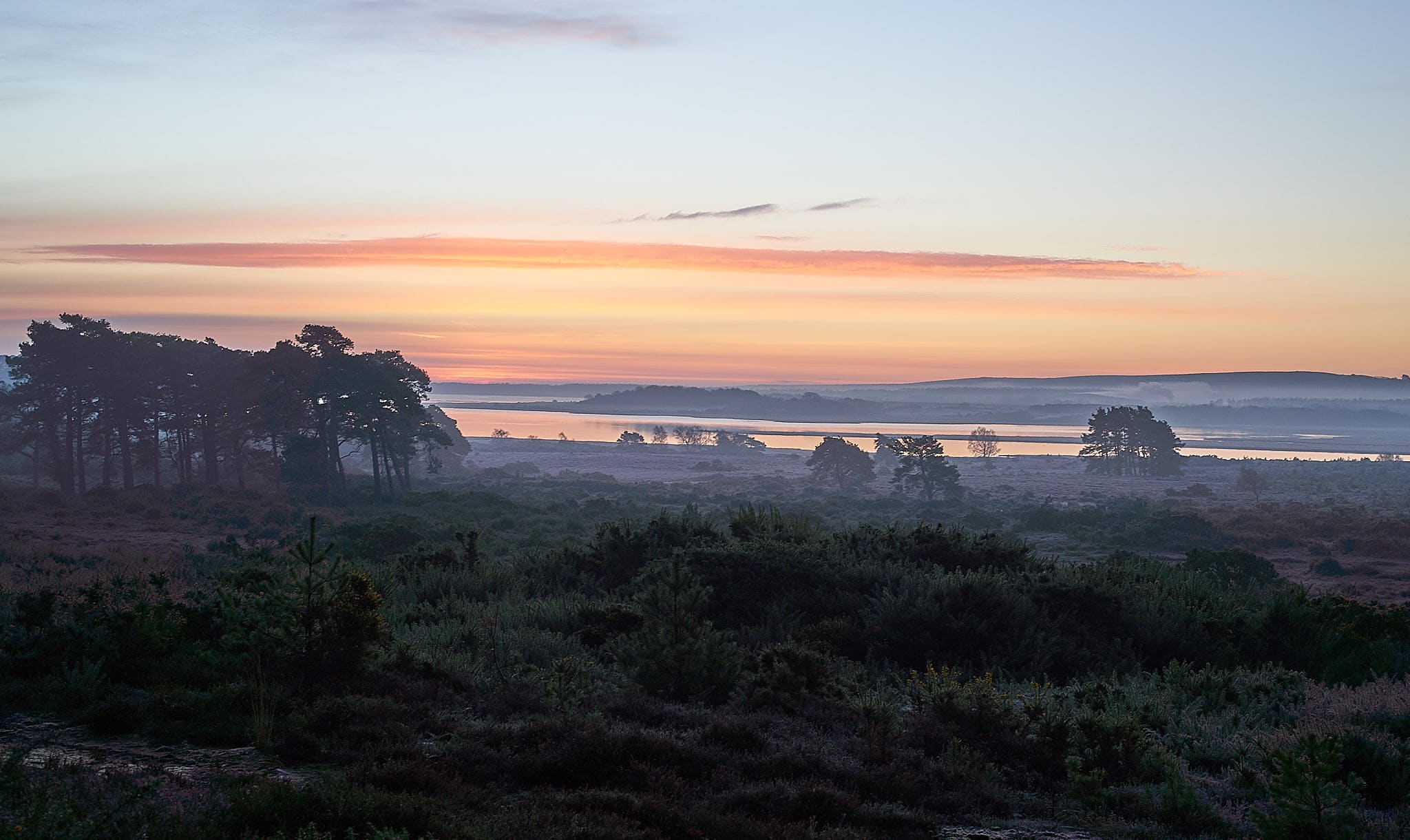 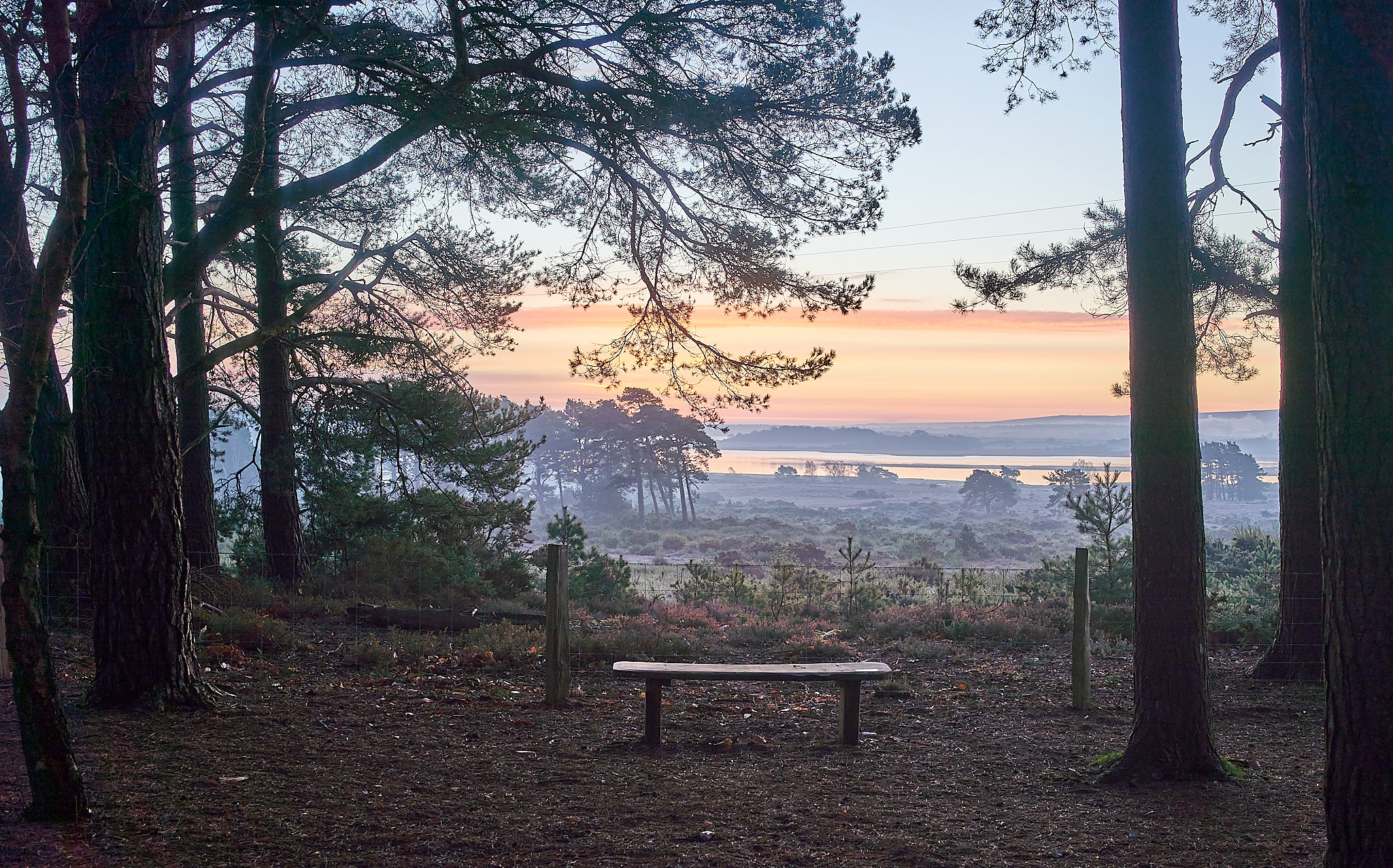 It doesn’t seem small when you are here. Down by the shore you can see Poole across the water, and to the south, Brownsea Island. From here south to Studland it’s all protected woodland, farmland and heath. 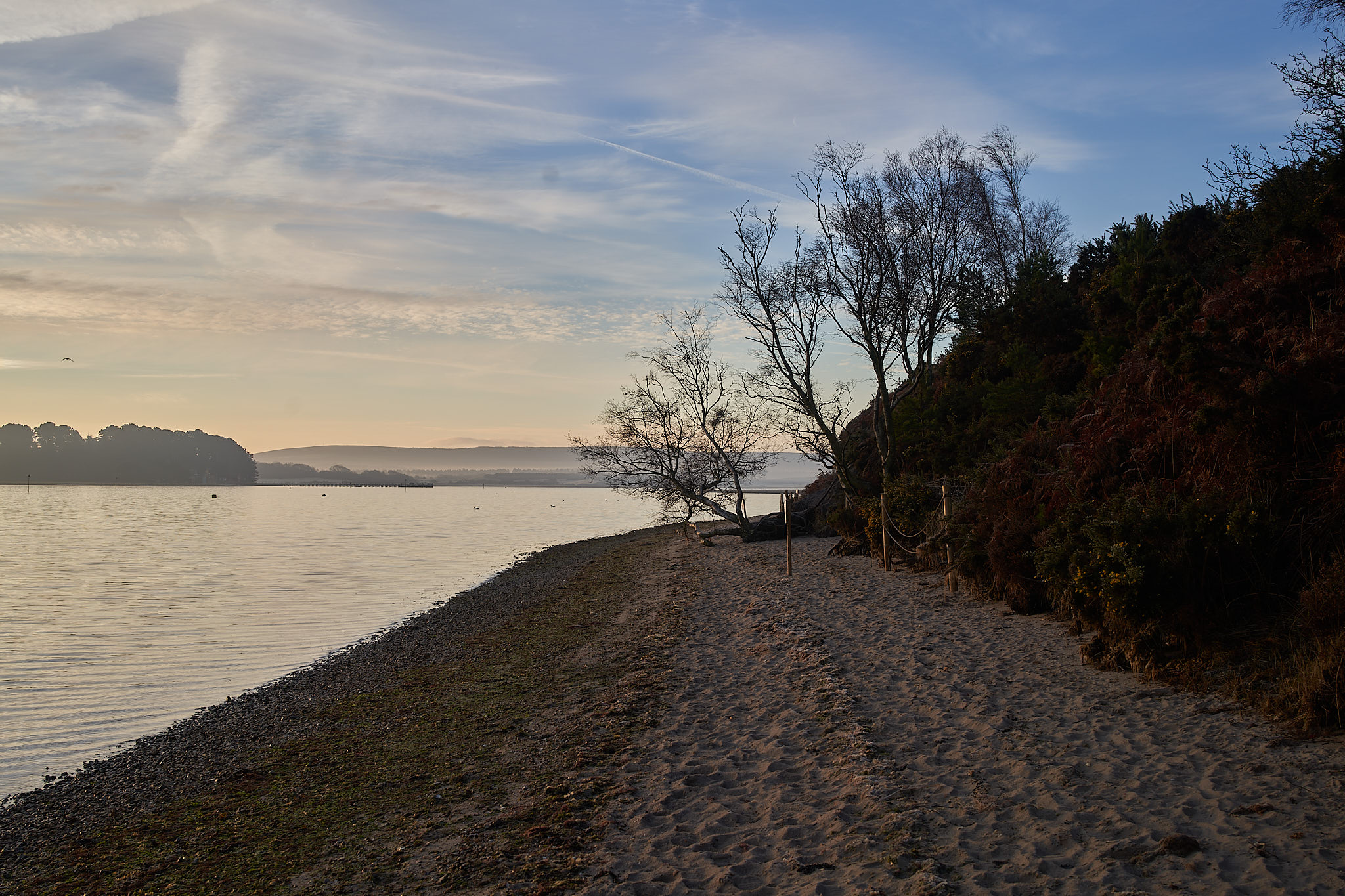 When I reached the shore on Wednesday late morning, the tide was right out and few living things were to be seen on the mud. Later in the afternoon I went to another part of the shore and saw a group of what looked like black ducks. They were Brent Geese of the dark bellied race who nest in Siberia and overwinter here. “Brent” comes from “burnt” and they do indeed look charred. I set the tripod up and took a few shots from a secluded spot near the beach. Then I walked round the corner and saw a group of them a few metres away, behaving like park ducks. I guess someone feeds them. Imagine flying from Siberia for a few mouldy crusts. 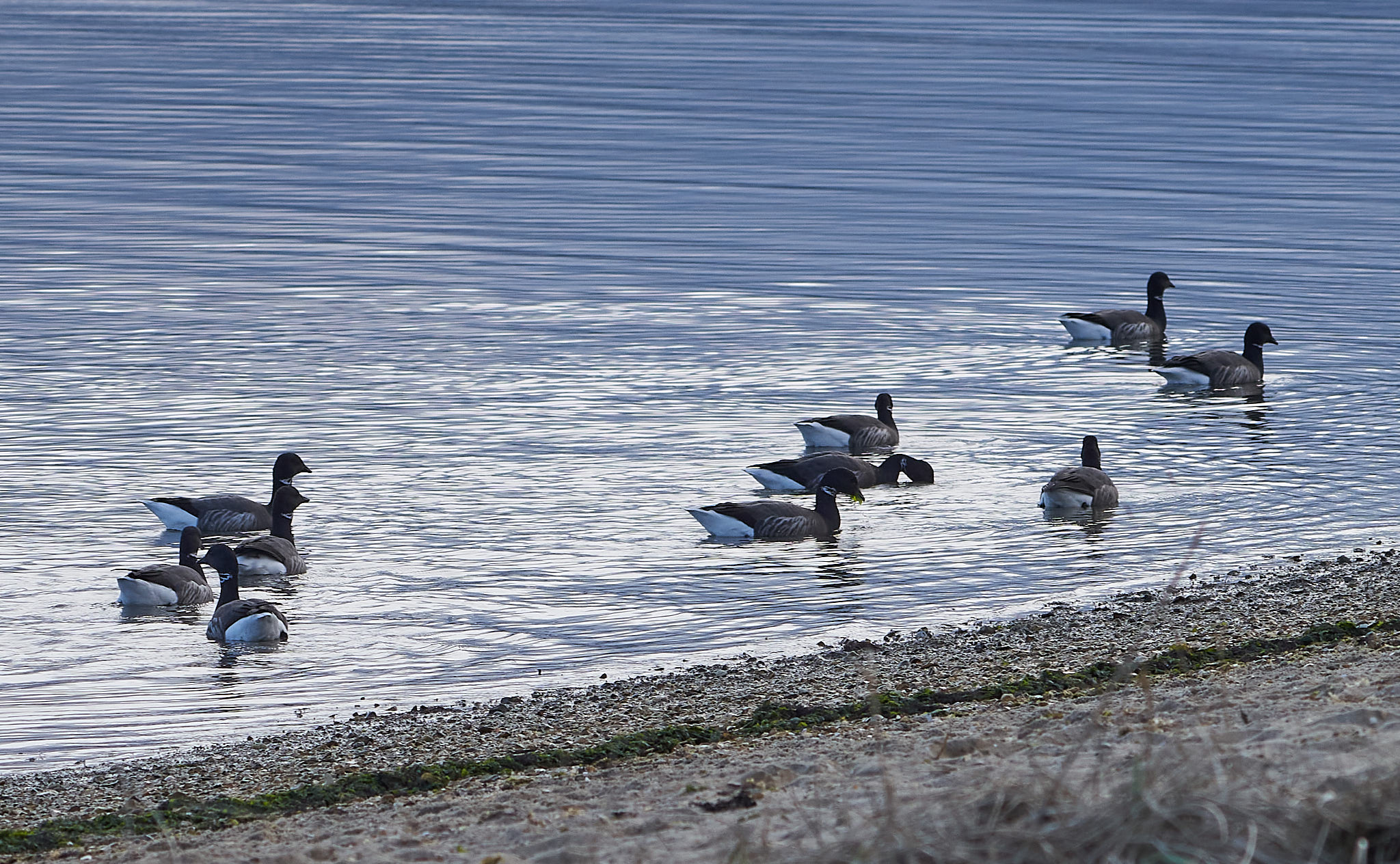 I stayed the night nearby and arrived before sunrise. The tide should be high, but the path to the best hide was closed for a reason familiar from my Dinefwr sessions: deer culling taking place. The deer here are Sika.

Ten minutes later I forgave them. I was laughing with joy at the astonishing views, some of them above.  For the next hour I had the place to myself, and all the stresses of the last few weeks were dissolving. 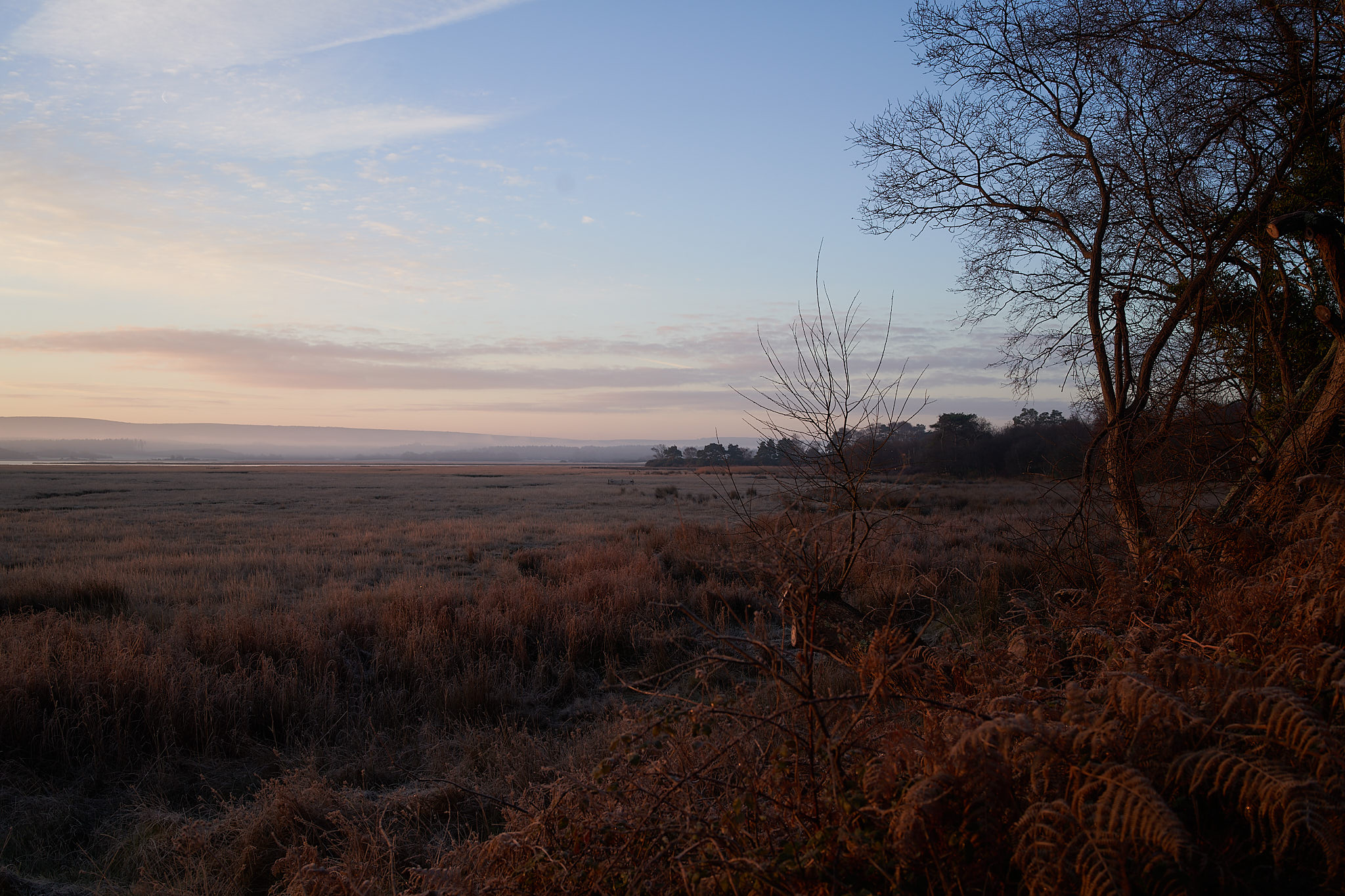 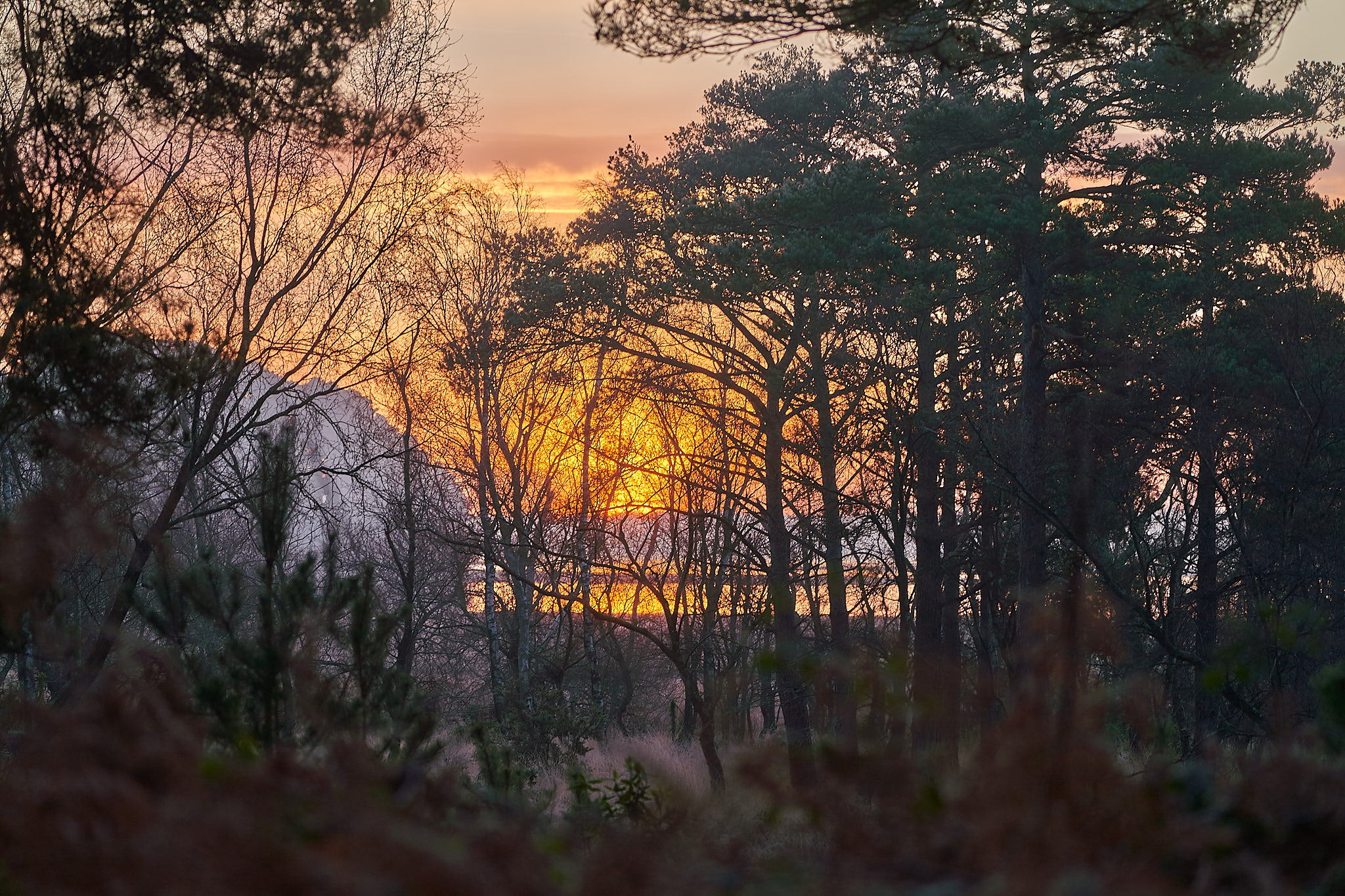 Further on round the estuary there is an older elevated hide and I was there before anyone else. By this time the tides was out again but I did count 25 spoonbills – the biggest group I had ever seen. Considering they only began to arrive in Britain a few years ago this is quite something. Sharing their water space are Teal, Wigeon, Pintail and Curlew. As I sat quietly watching, two foxes came past just beneath me.

Time passed. Nothing was moving except the far off spoonbills fidgeting. It was still, silent and freezing. On the way out I stopped at the top of the steps. The delicate purple tinged  birch twigs were alive with little brown birds: Lesser Redpolls, a whole flock of them feeding on the seeds-their preferred food. 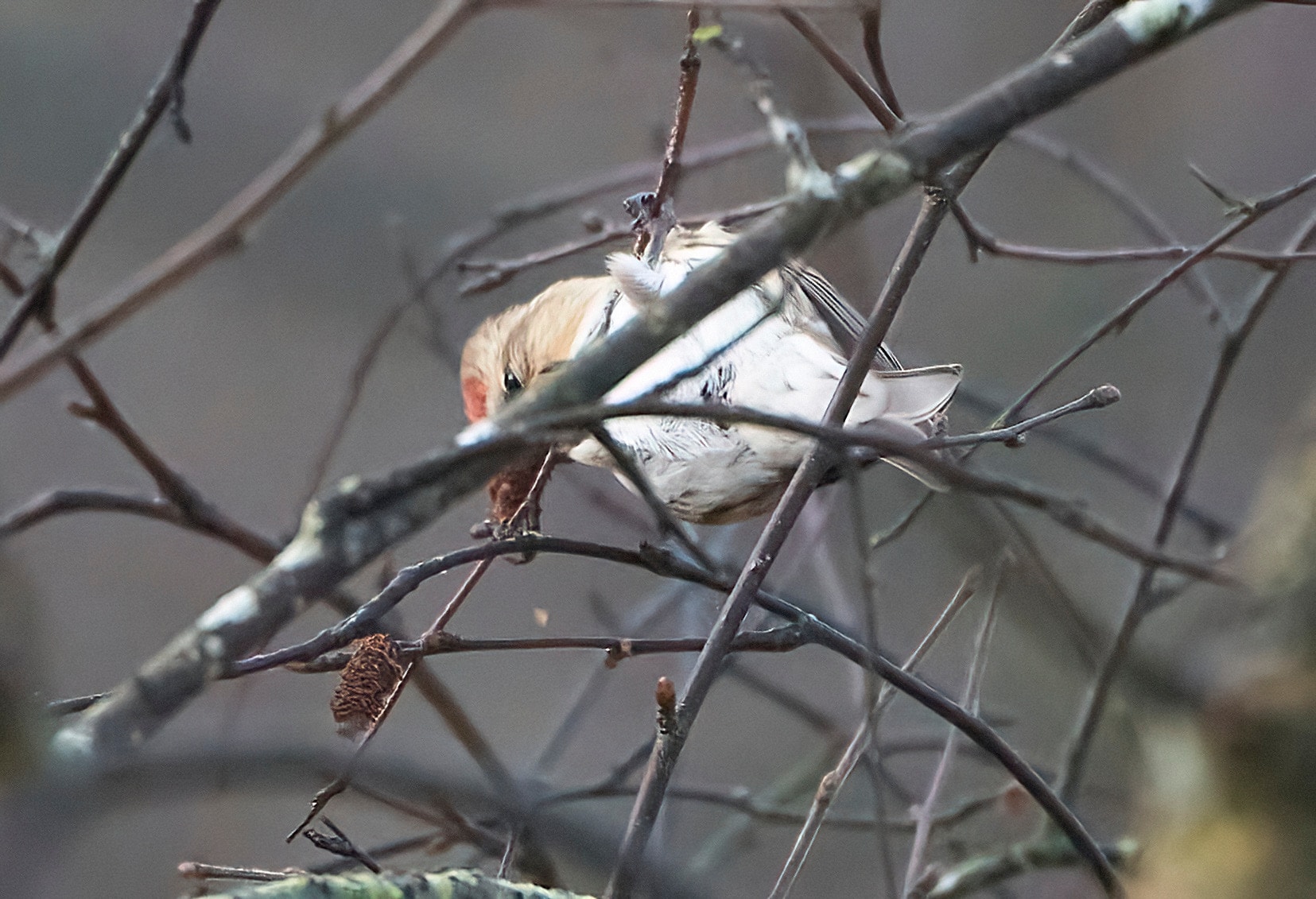 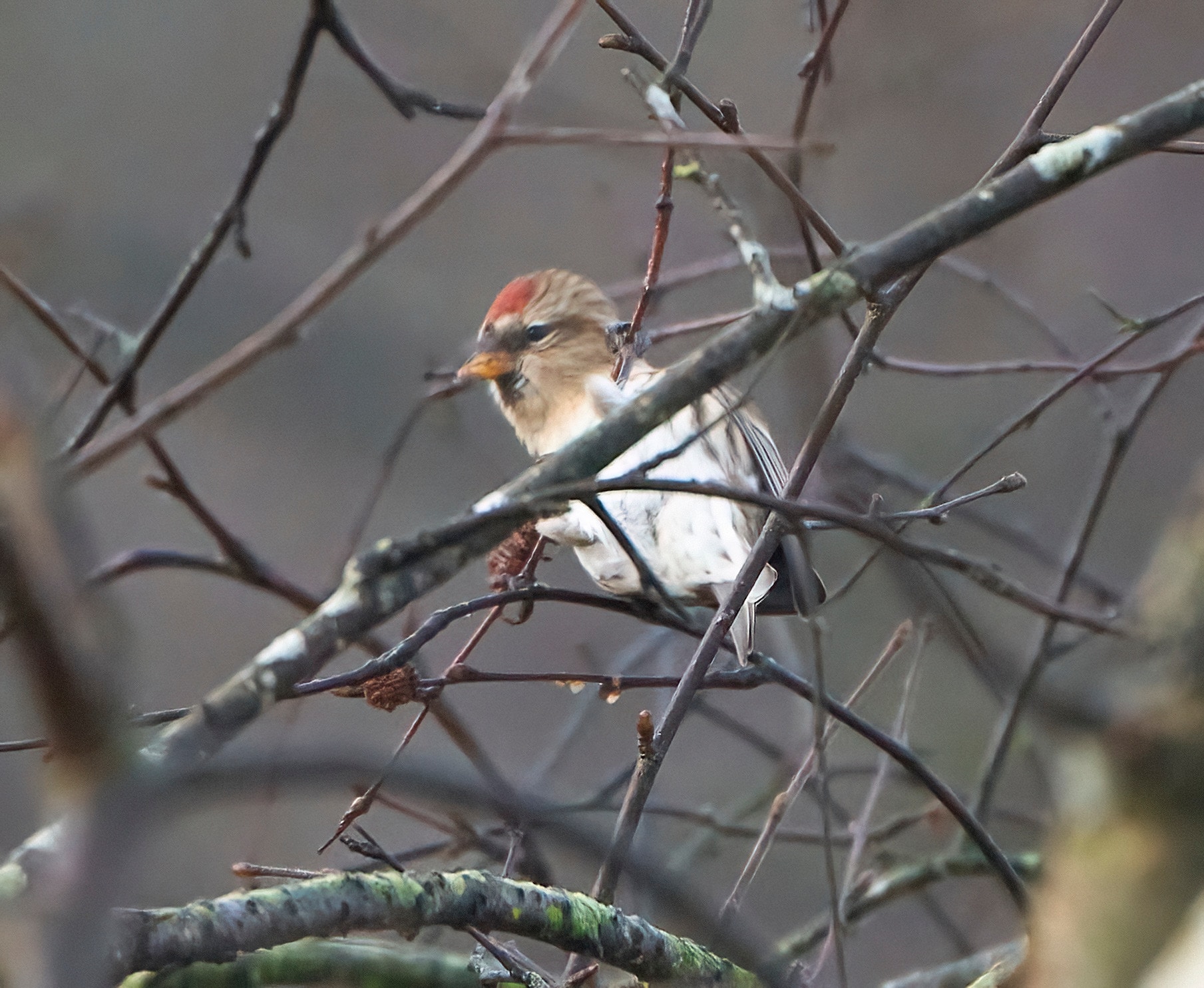 The next day I was in another bit

of wilderness in the urban sprawl around Portsmouth. This was Tichfield Haven, a patch of marshland in a small rural enclave hemmed in by Fareham and Gosport. I only had an hour but the light was perfect and the birds plentiful. I saw Teal, Wigeon, Snipe, Black Tailed Godwit, Marsh Harrier, Lapwing, Starling, Black Headed Gull, Canada Goose, and Oyster Catcher.  Here is a selection, including a strange looking leucistic Oyster Catcher: 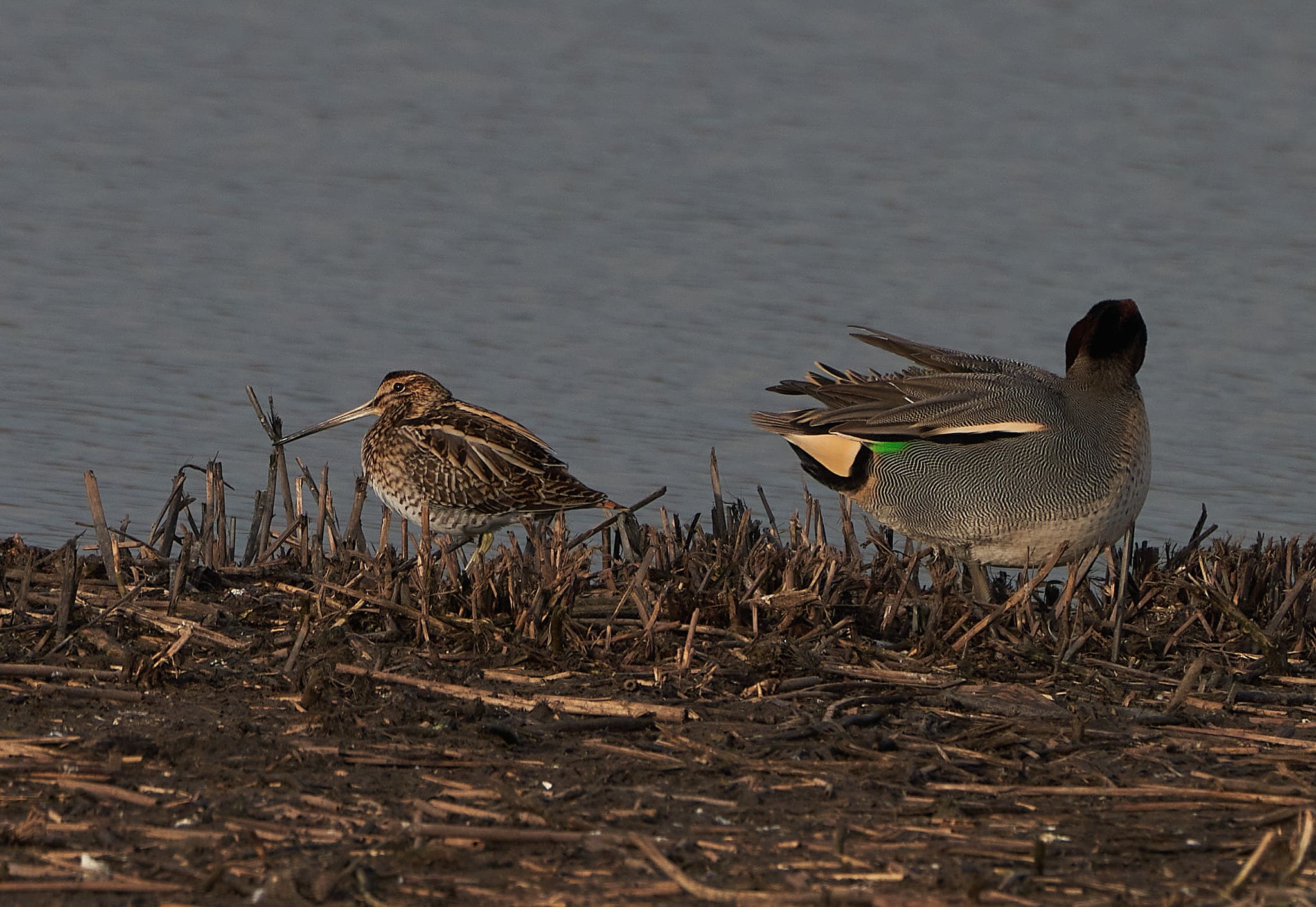 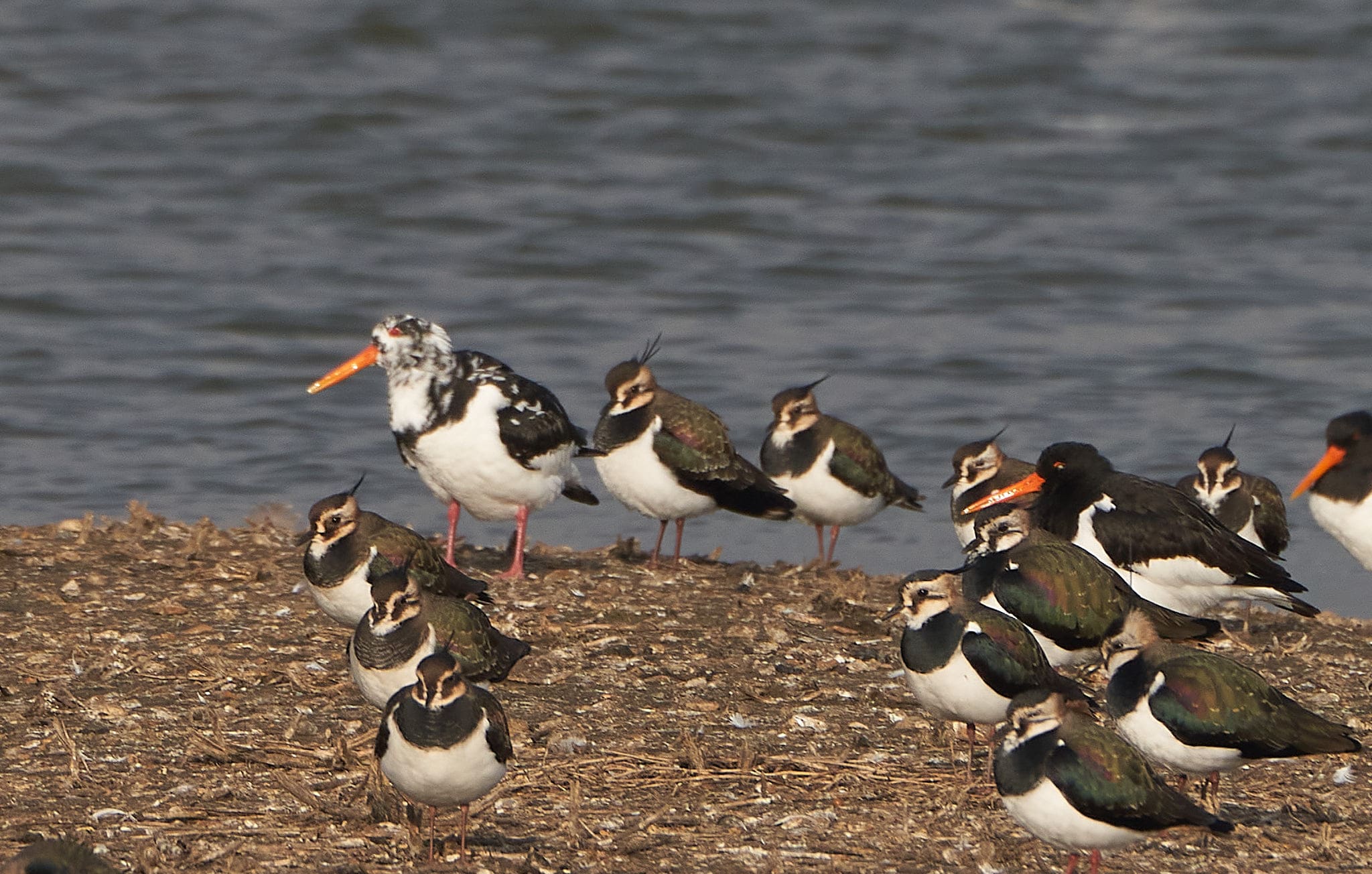 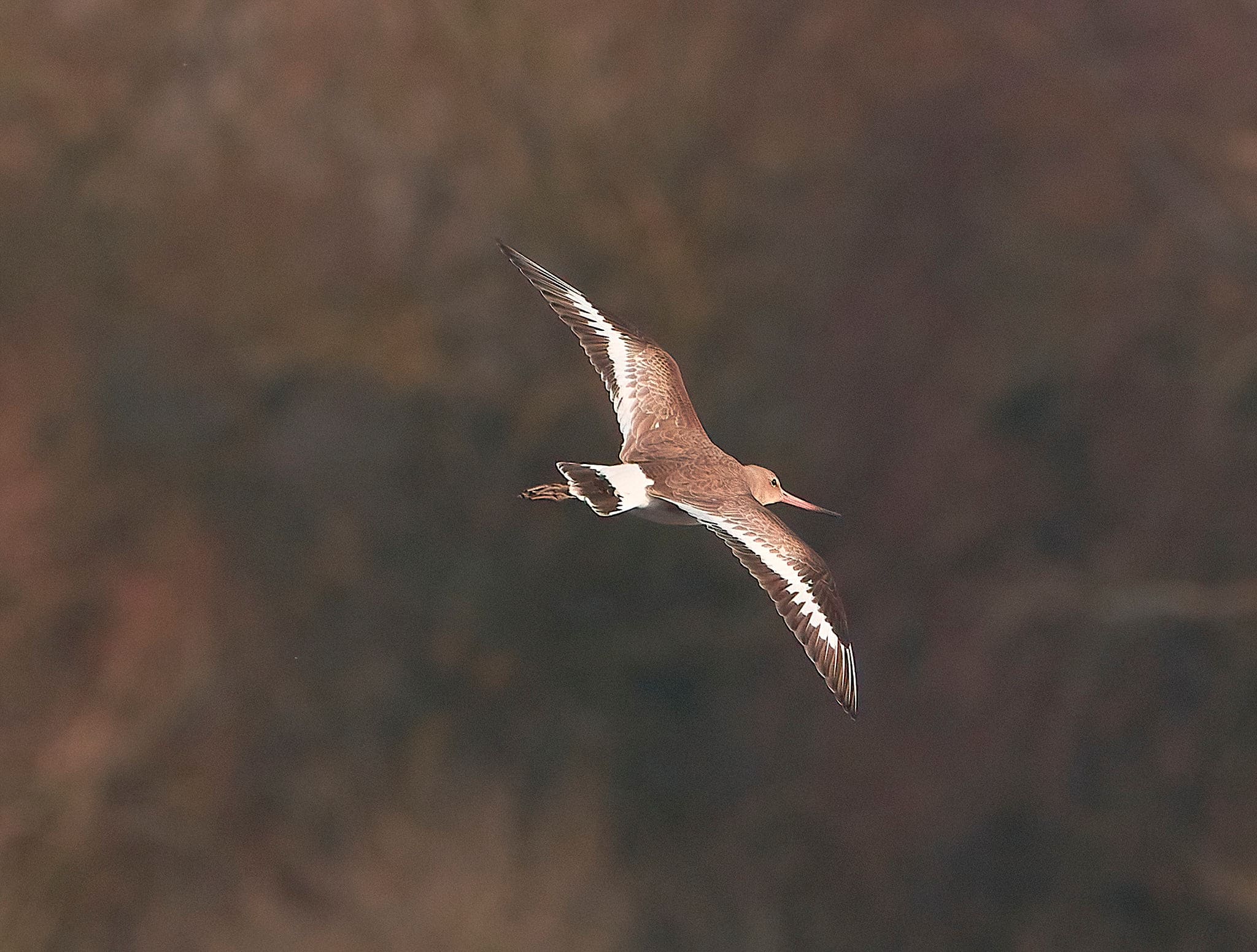 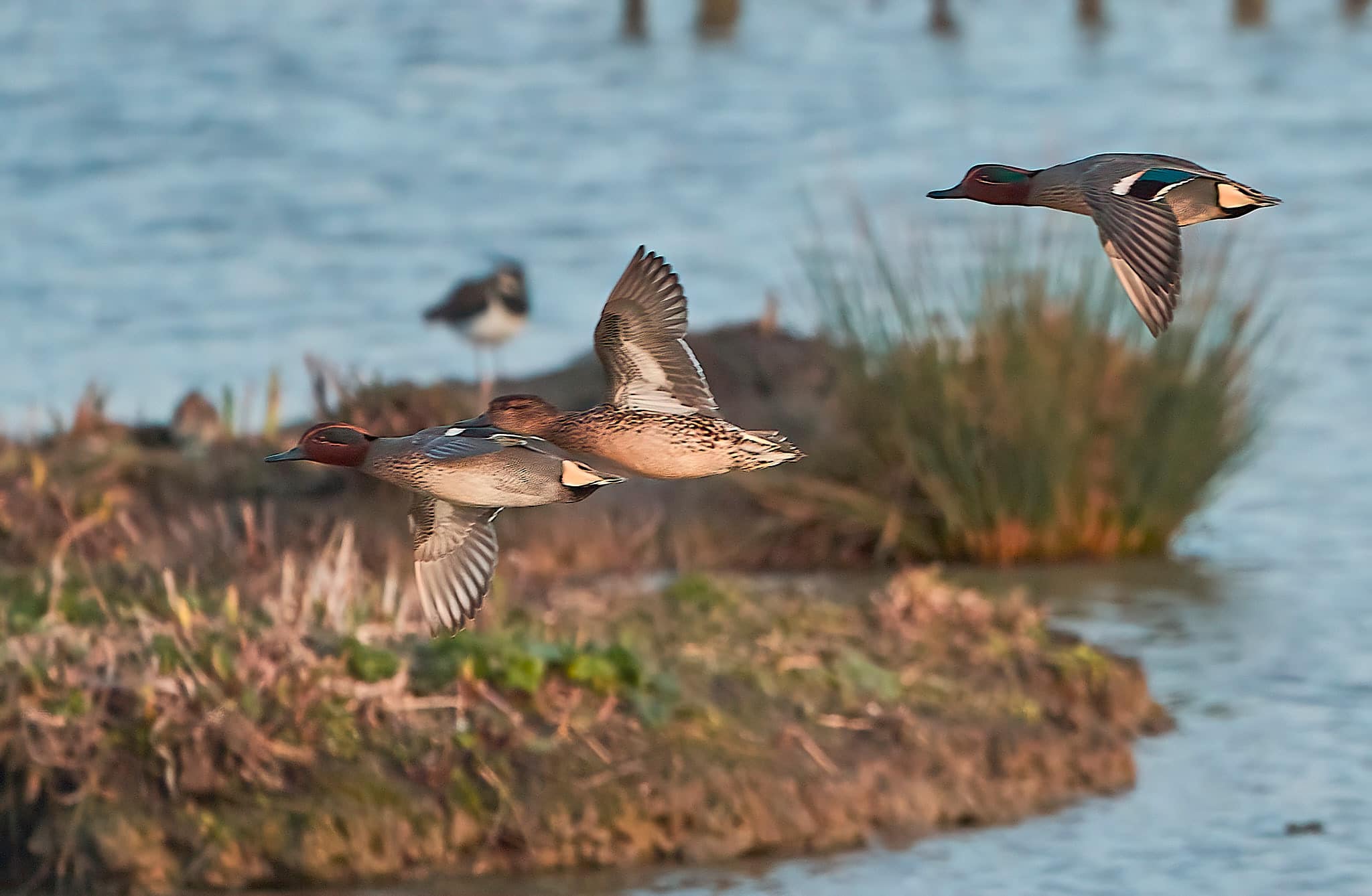 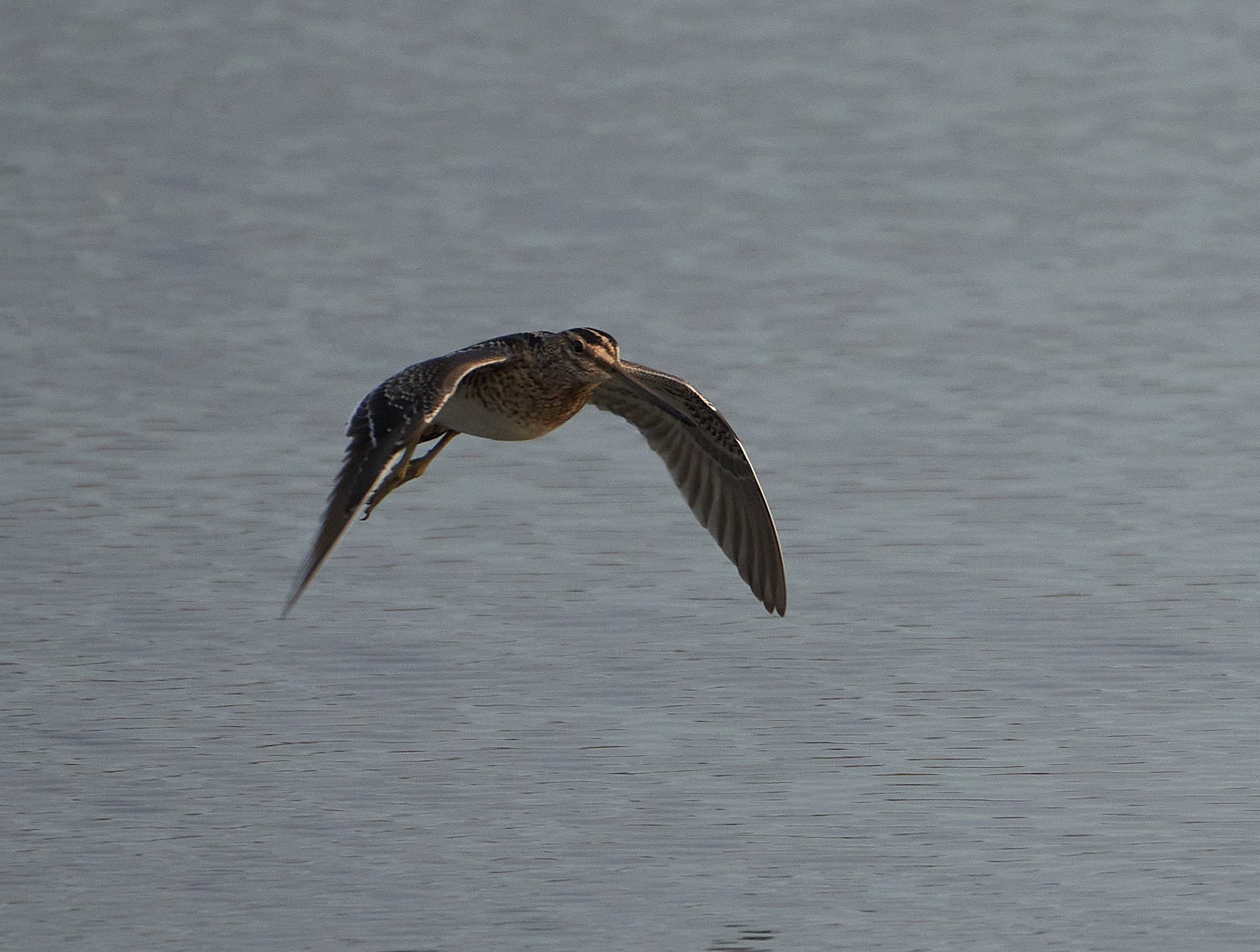 Could this area be some sort of model for the cities of the future? When I am being pessimistic I see the human tribe hurtling towards disaster, unable to change its entrenched habits of consumption. And yet, every day I come across more and more reports of people coming forward to reverse the ongoing damage to the natural world. If, as many believe, an increasing proportion of us will live in cities in the future, in my most optimistic mood I could see our cities becoming havens for wildlife, with big areas set aside as semi-wilderness, and others for intensive food production. I doubt I will live to see it though.

Now I am in France for a week with my daughter Hannah who is recovering from Covid. It’s very strange not being able to be together indoors – we sit outside in our coats 2m apart!

This entry was posted in This Wild Life, Uncategorized. Bookmark the permalink.

4 Responses to Cities and Wilderness