Stories from the Early Morning 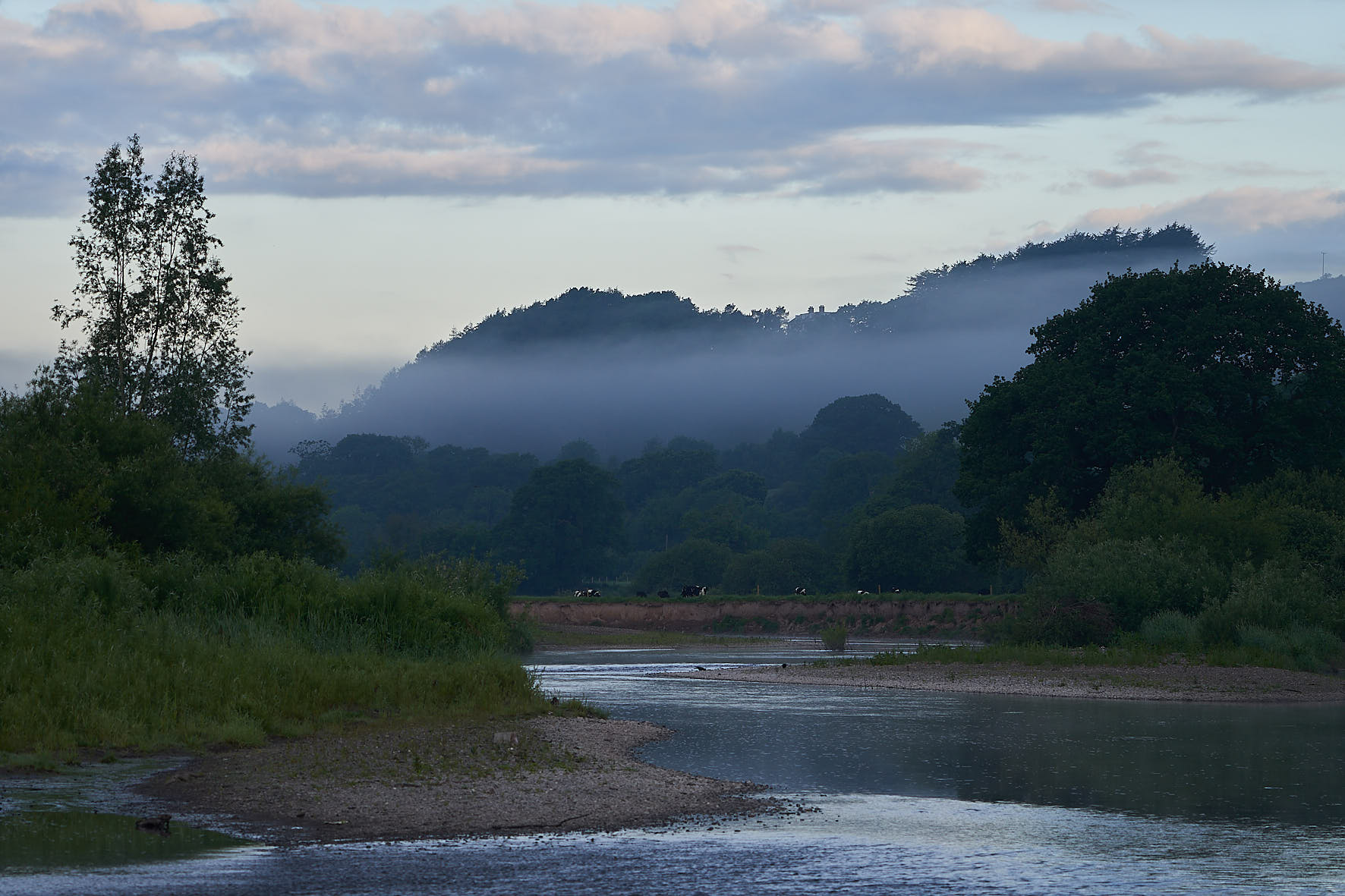 There is a long period at this time of year between dawn and sunrise when light has a special quality –  less contrast, less colour, yet far from gloomy. The picture above captures it. I parked the car at 5:30 and set off on a long trudge through long grass so intensely wet it defeated my walking shoes and gaiters within minutes. By 5:50 I and my wet feet were set up (with permission)  in my little pop-up hide by one of my favourite stretches of the Towy. 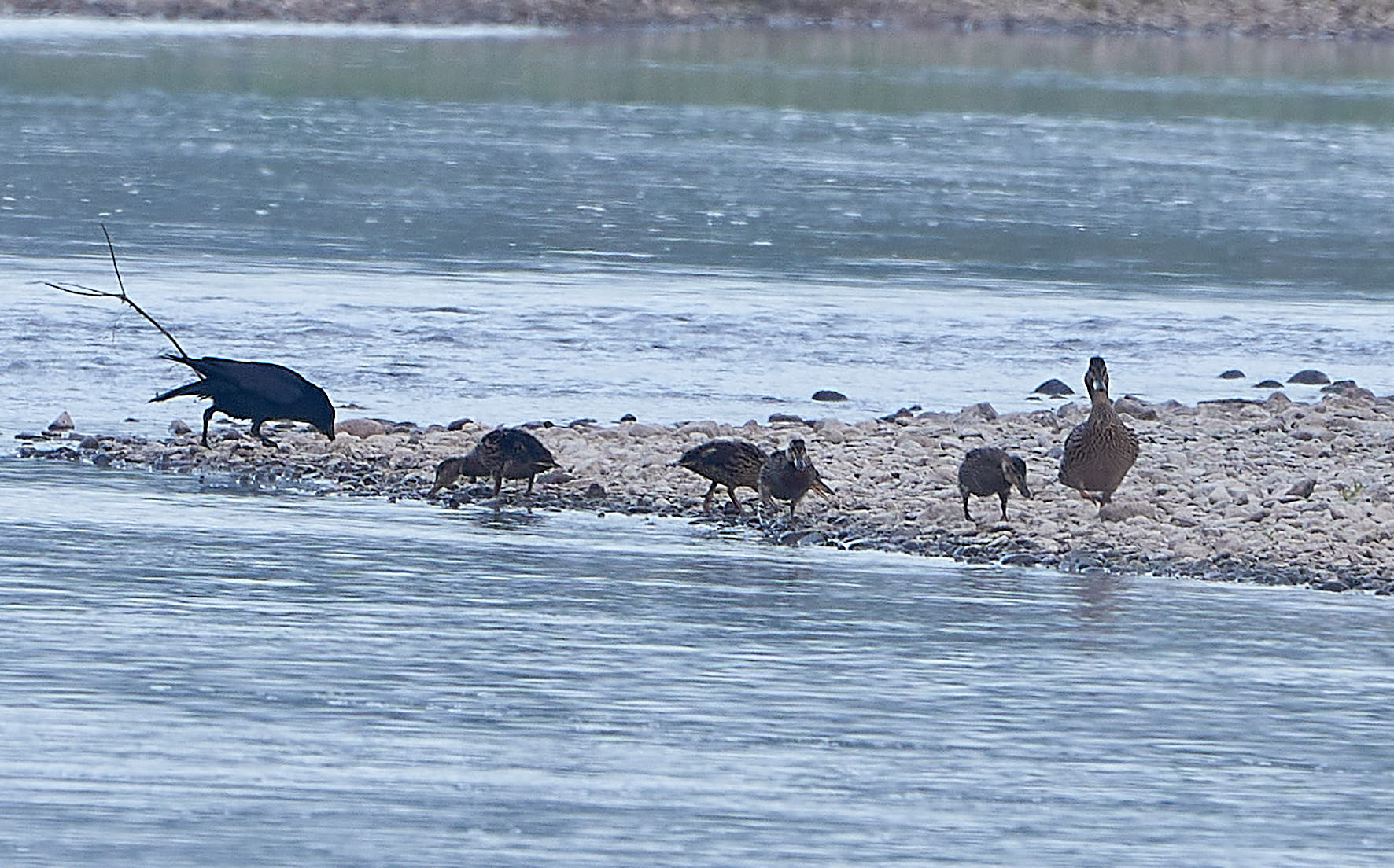 Alert for any movement, I waited, and then I waited some more. Two Carrion Crows away upstream; a few Mallards also a long way off; then I noticed a flicker of movement much closer. A Reed Bunting had flown across in front of me to a little shingle island where a few willows had taken root. 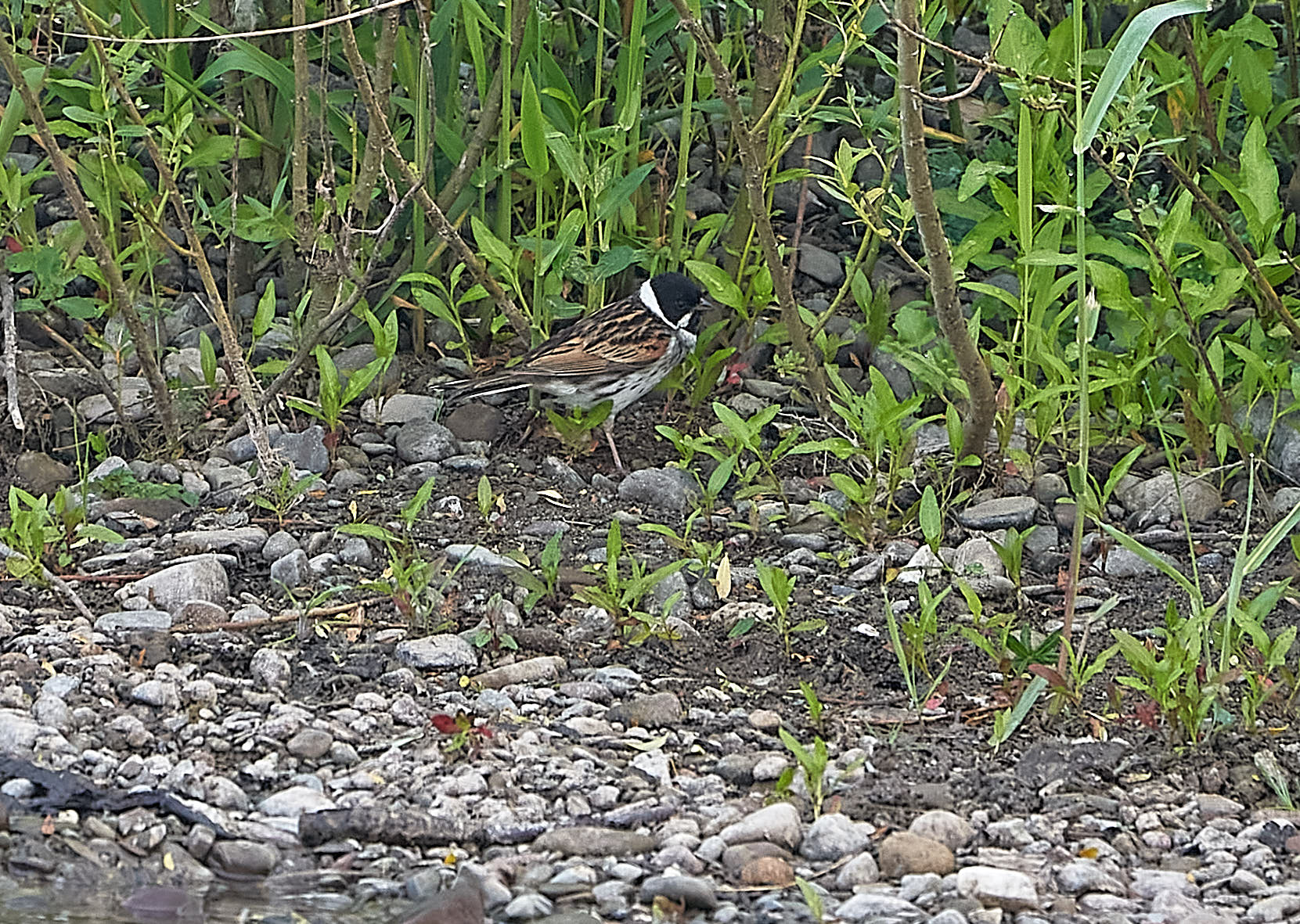 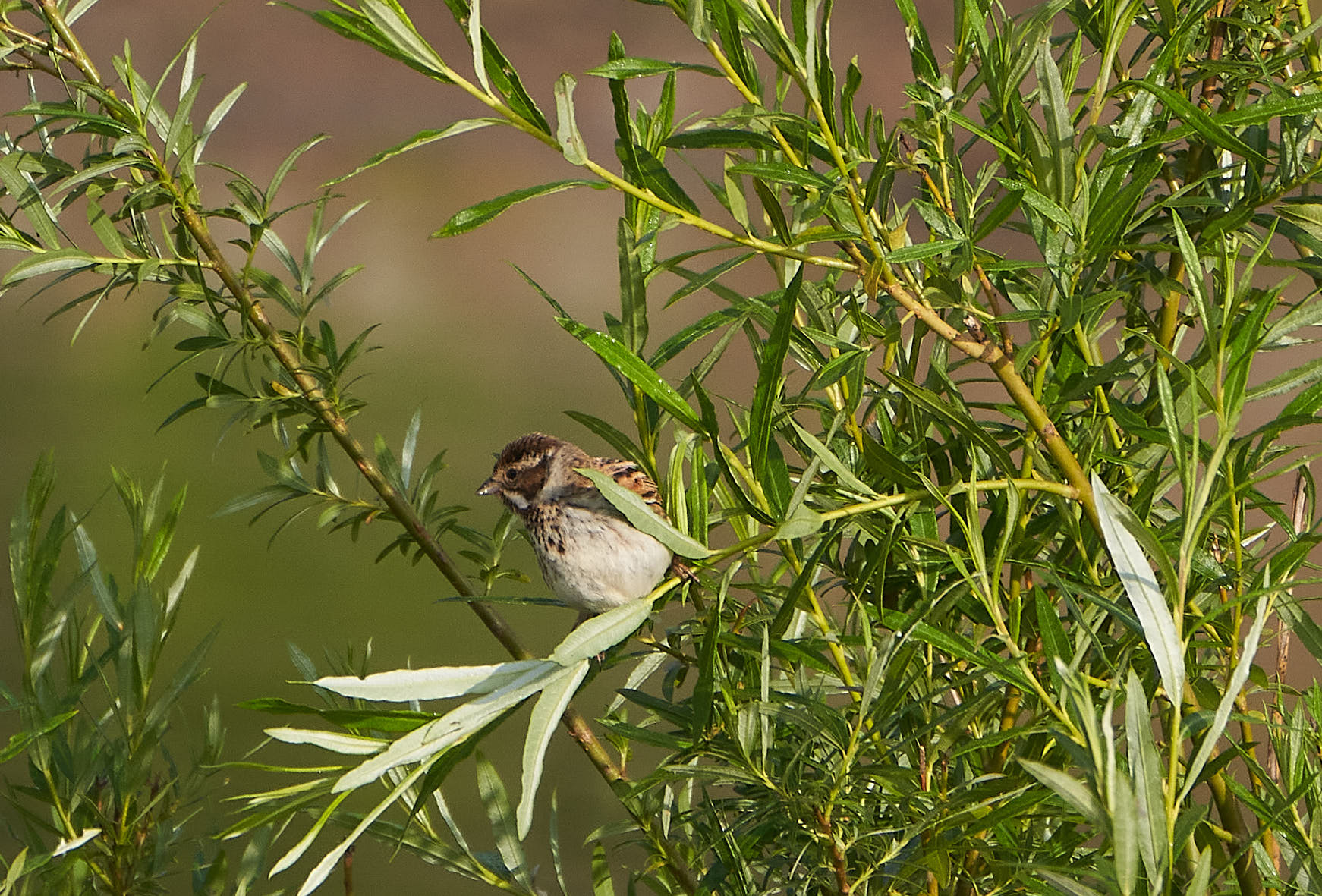 Did he have a nest there? After a few minutes he flew back to the bank. Then a female appeared and rustled around in the willows. Ah .  . .  I see, they are collecting nest material. The flood water must have left bits of dry stuff tangled in the willows, but where could they be nesting? There are no reedbeds nearby. 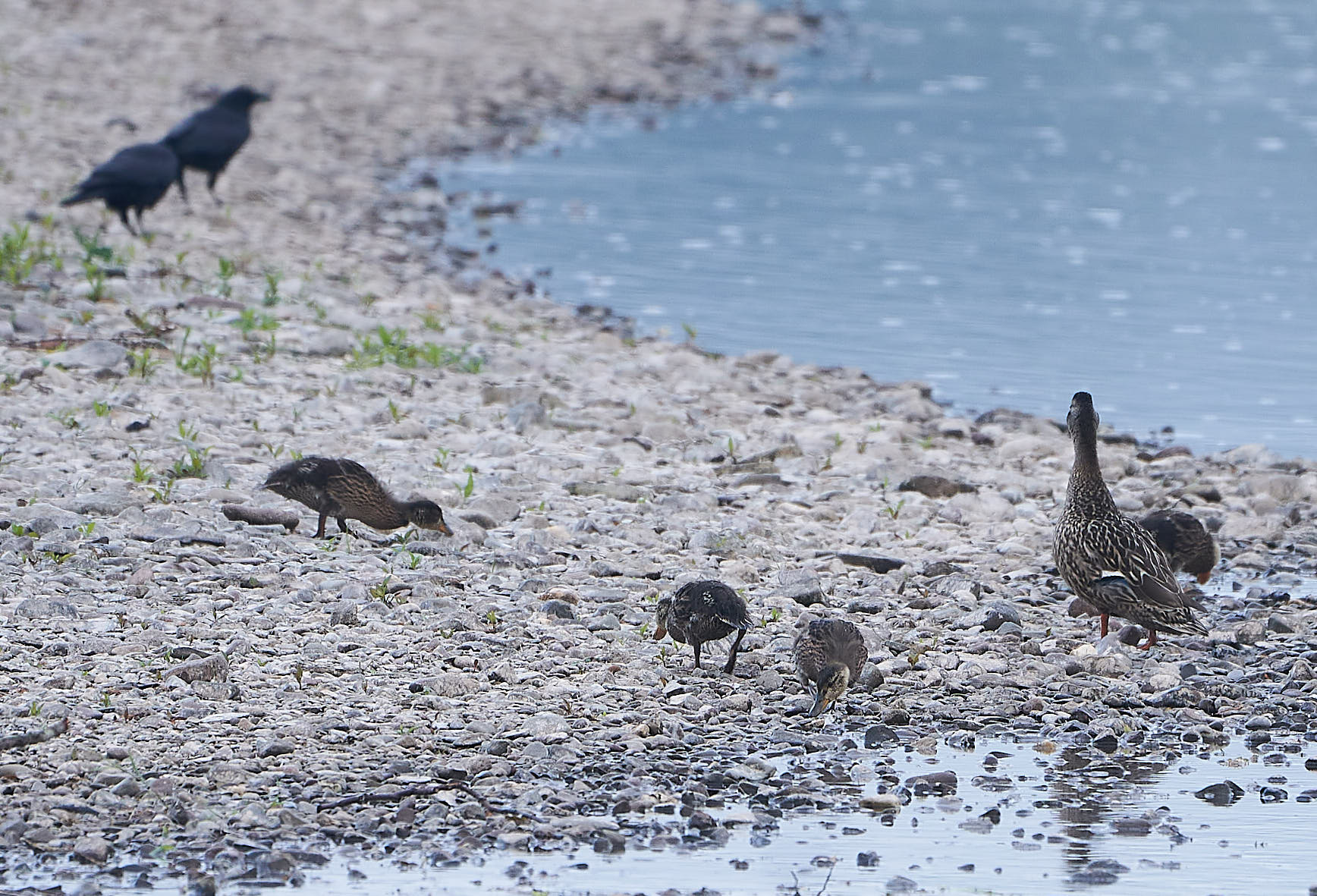 Now I see that my little group of Mallards has drifted closer and, with the crows for company, are searching diligently among the pebbles. There are four youngsters and a mum, and they are very busy for a while, but they are still only a couple of weeks old and get tired, so settle in for a snooze. 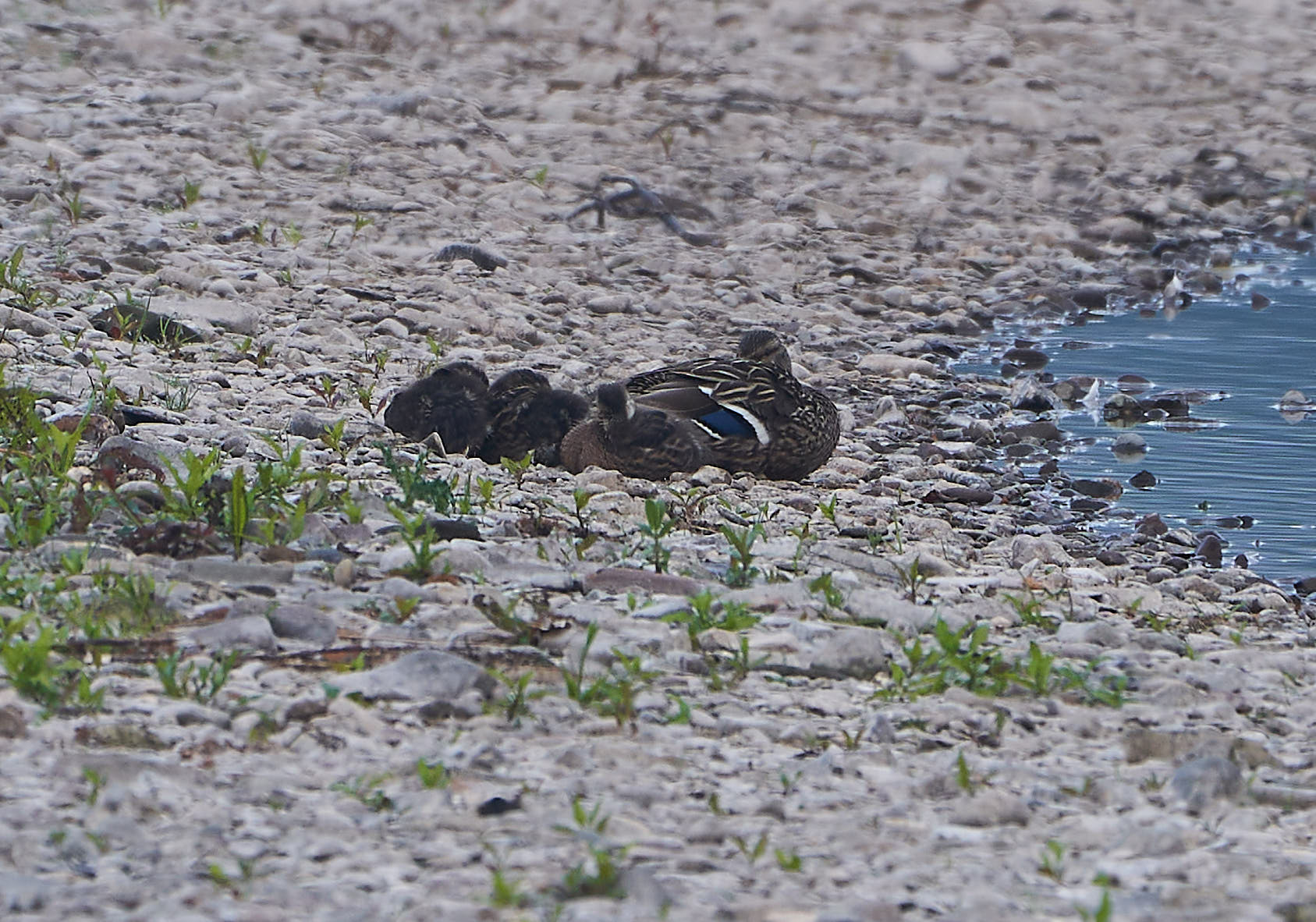 I focus back on the more distant gravel spit and watch a Mute Swan approaching, swimming at considerable speed downstream. A slightly different pebble (almost invisible to the naked eye) reveals itself to be a Ringed Plover – gorgeous little waders who nest among the pebbles. 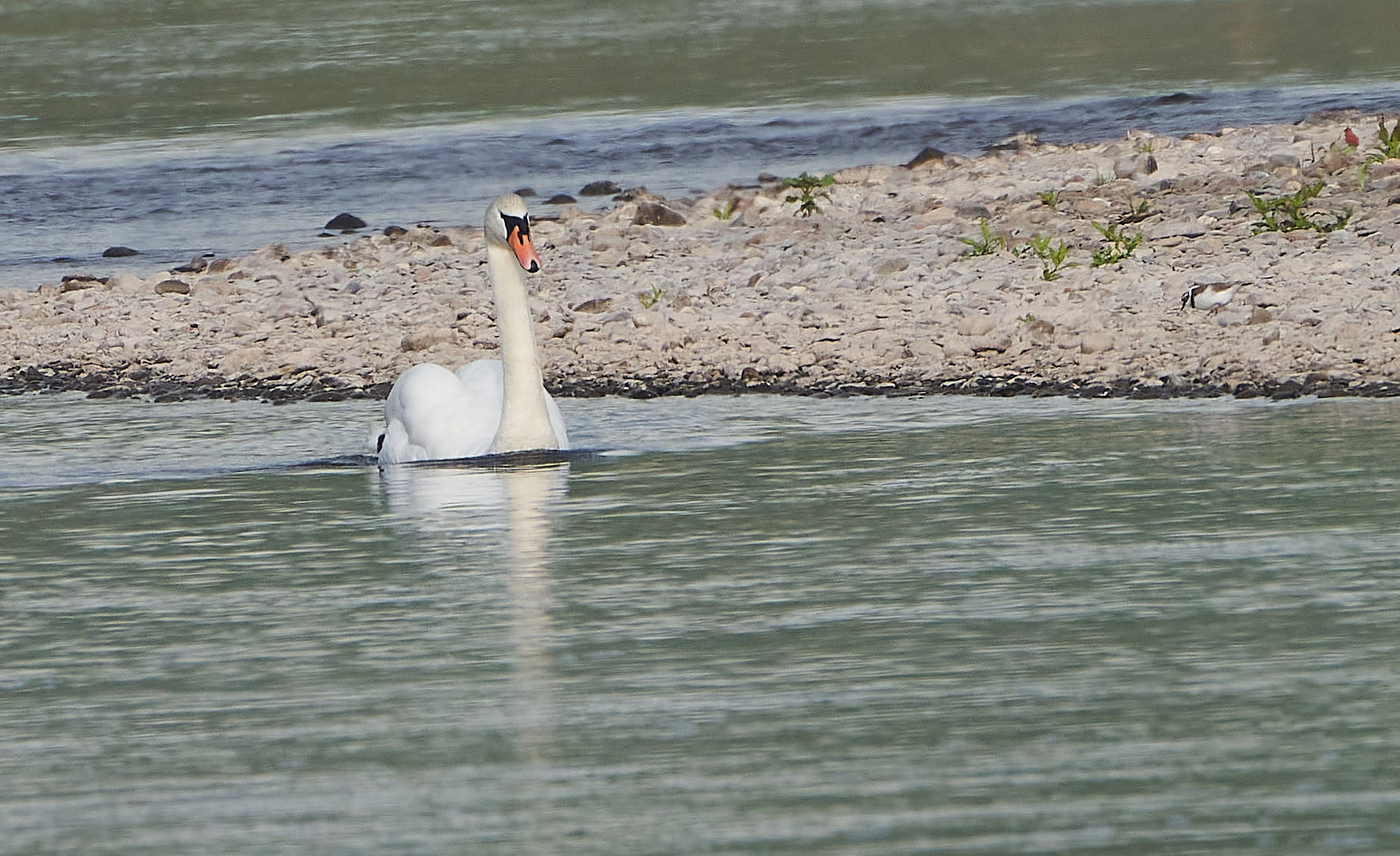 As the swan gets rapidly closer I see a disturbance in the water ahead of her. It’s an otter, and it’s moving very fast. I catch a shot before it swims behind the willow island and then position the camera to catch it the other side. Nothing happens. Somehow I missed it – must have dived. Never mind, great to know they are here still. 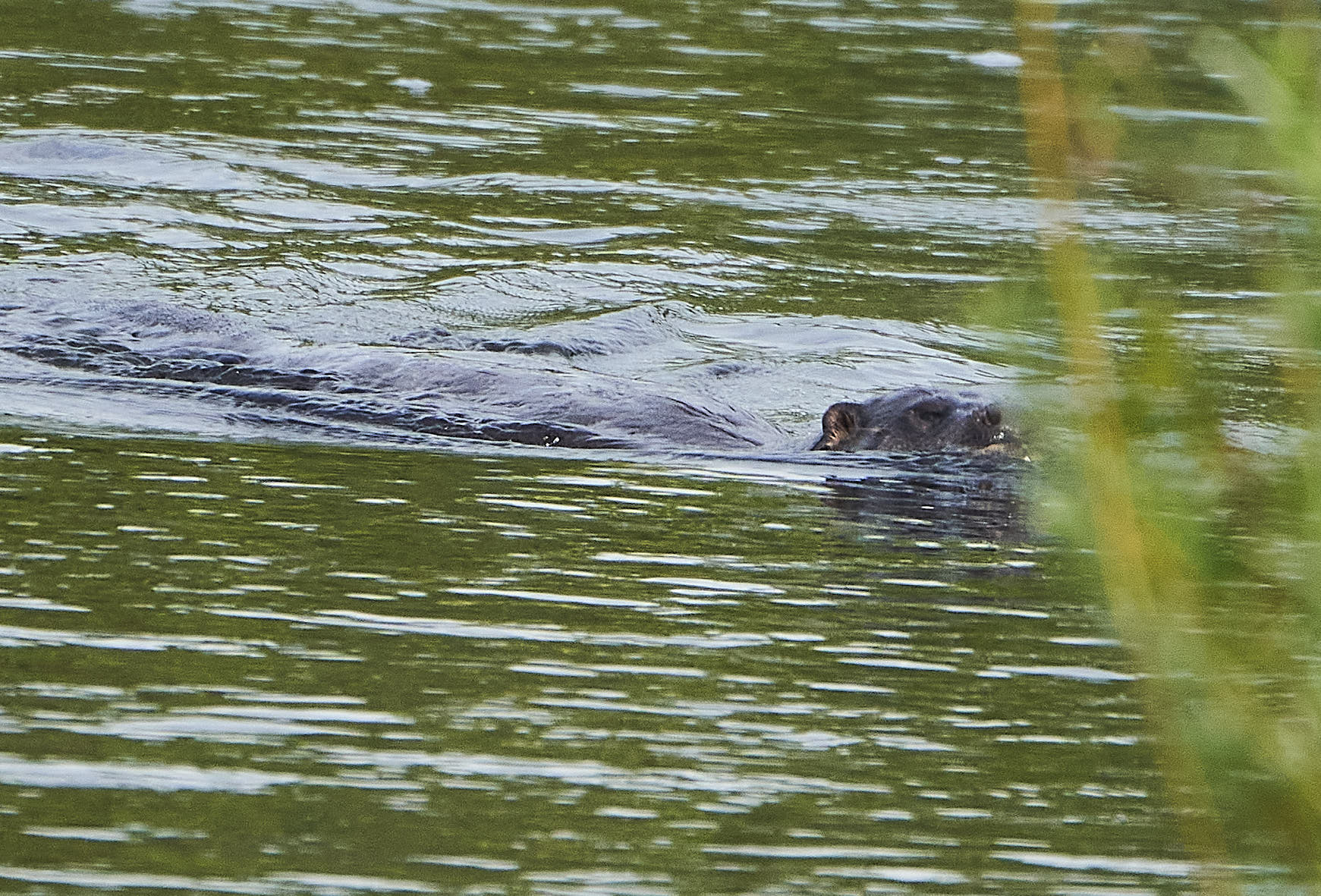 Now the sun is elbowing its way through the cloud and lighting up the big daisies on the opposite bank. It’s the “golden hour” for photography. 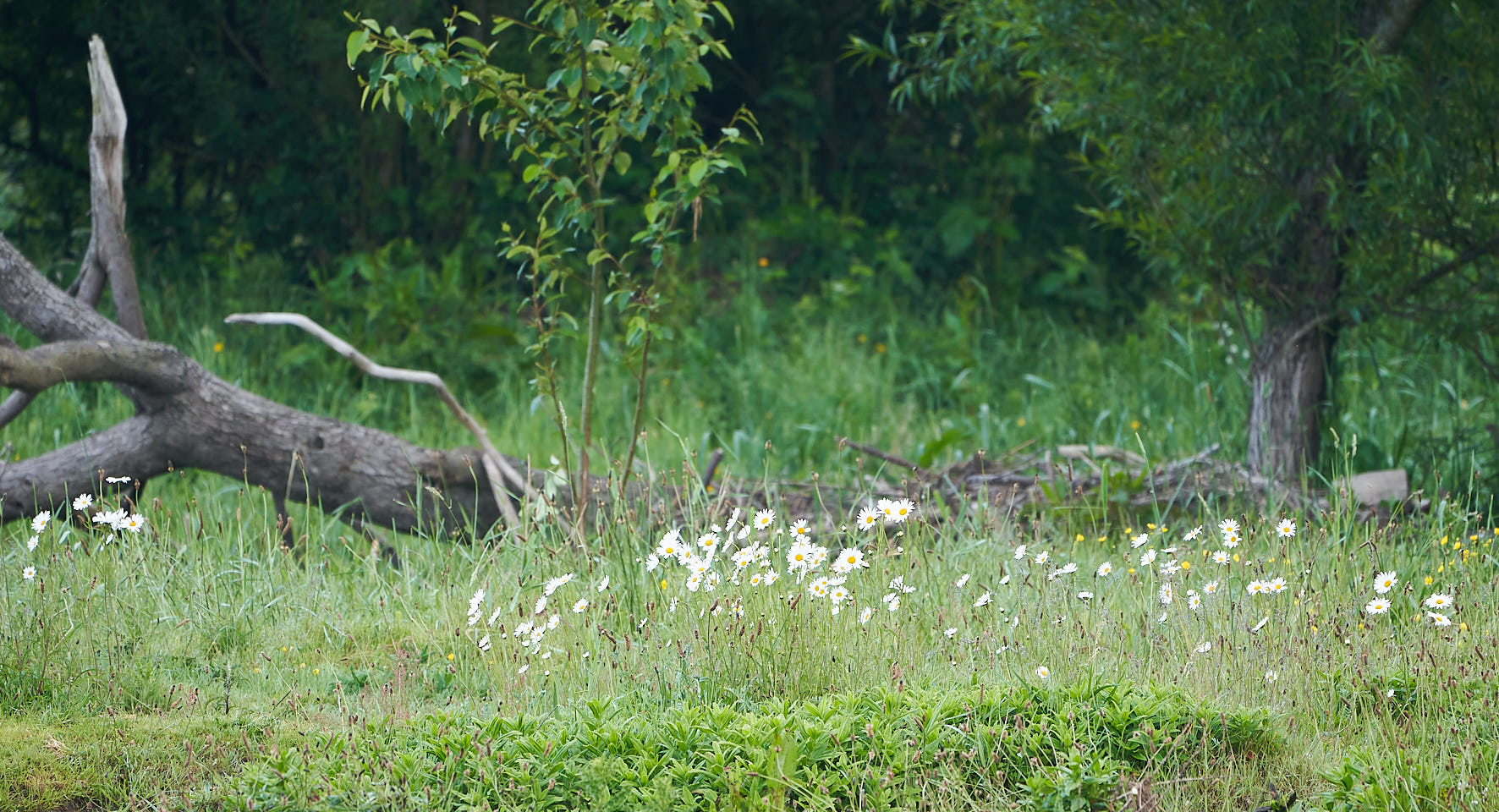 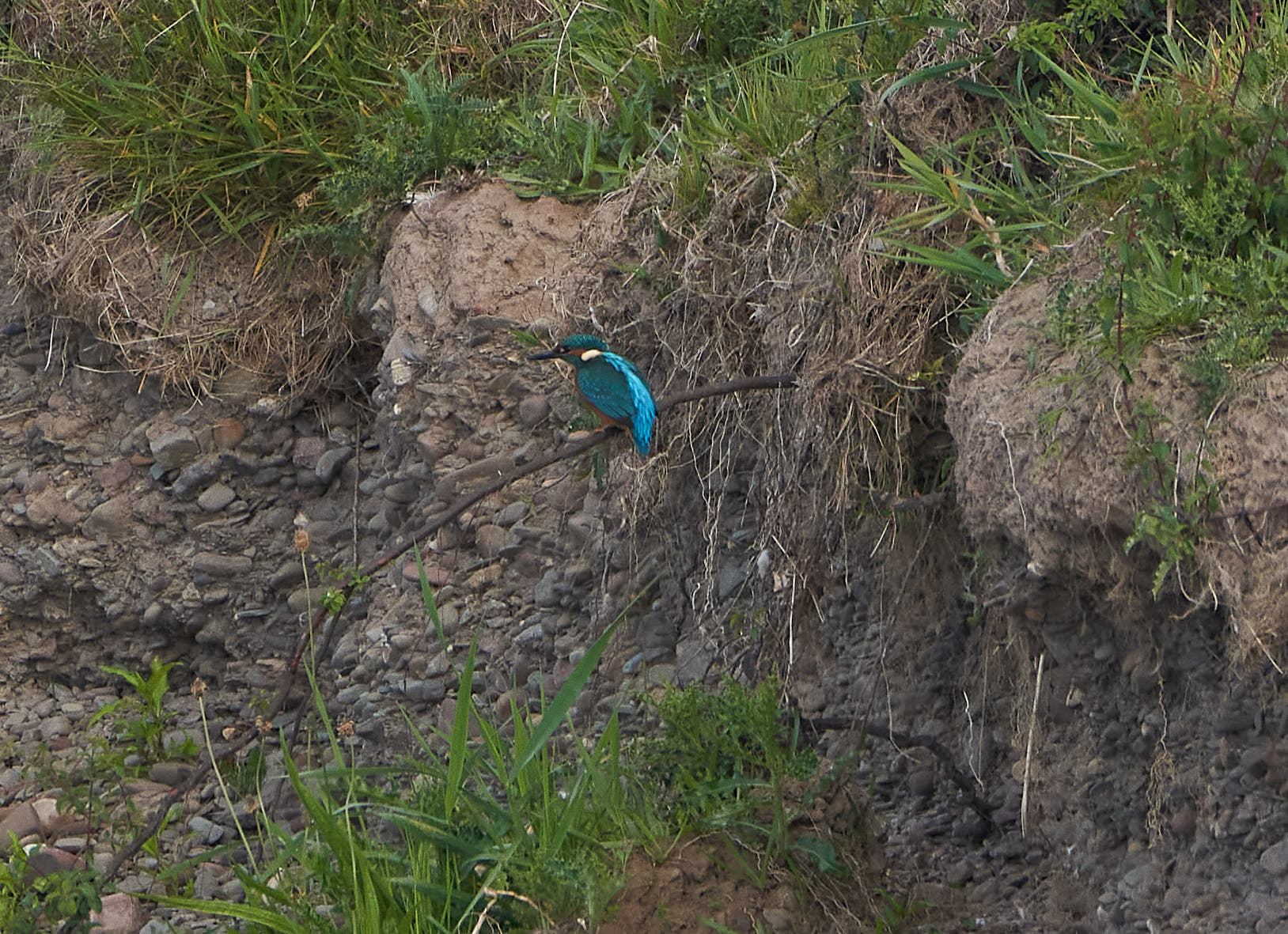 There’s a flash of blue zipping across the water to the far bank. Kingfishers are quite common on this part of the river, but I’ve yet to have any idea of where they might nest. The bill is black so it’s a male. He dives and returns, fidgets around and then dashes across the river and does a circular tour of the bank just beneath me. What’s he doing? Over a period of perhaps 20 minutes he makes several trips to this part of the opposite bank. Could this be a nest site?

I realise I have been almost two hours sitting here watching. This is the closest I can get to meditation – a term which fills me with dread. I can’t do deliberate relaxation, but I can do this.  This is my therapy. 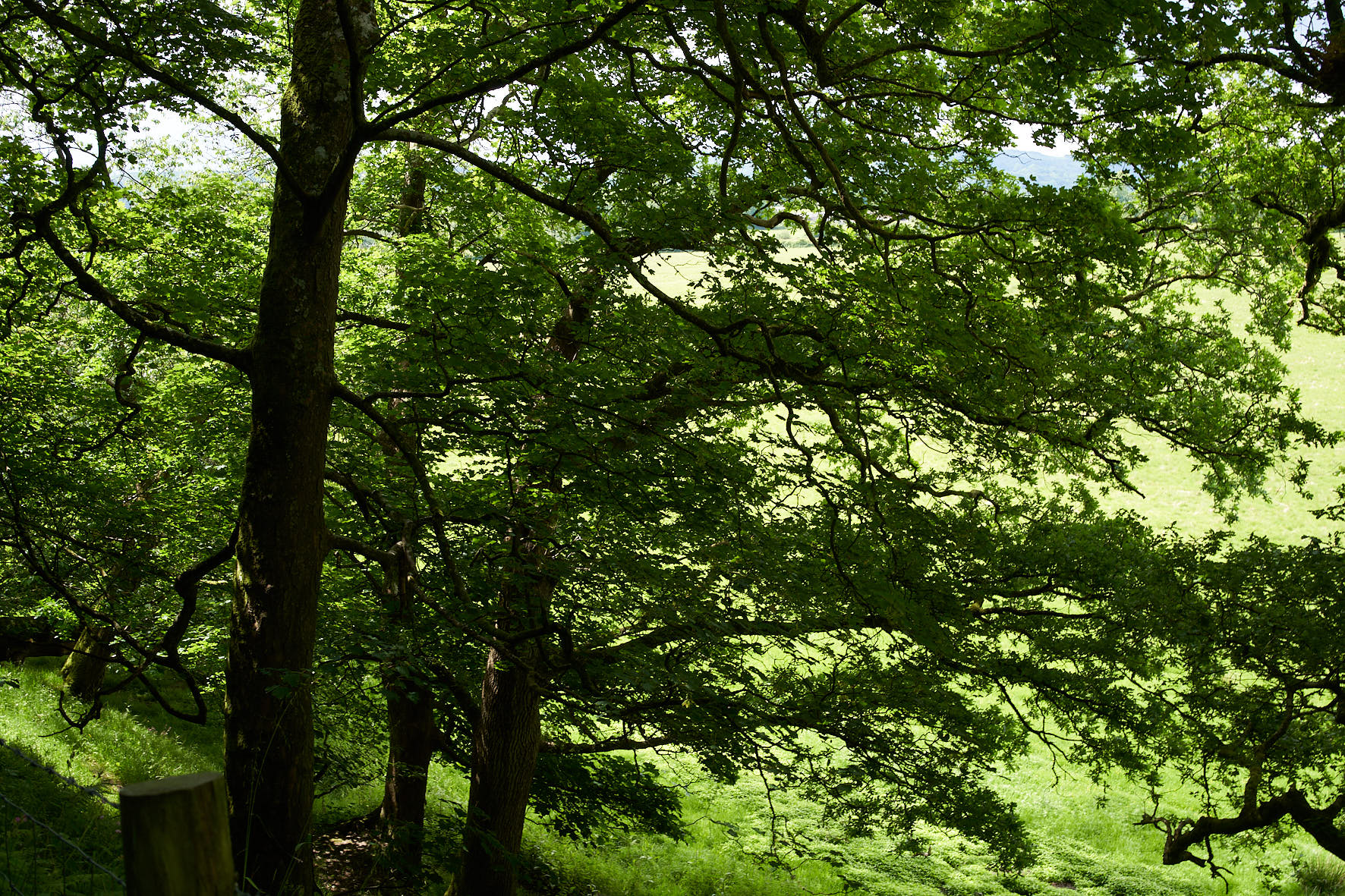 Now it’s time to go and give my feet another drenching. On the way back  I pass this tree which reminds me of the famous line from “The Garden” by Andrew Marvel

“Annihilating all that’s made

To a green thought in a green shade”

I’m still the only person around and this fox can safely go where he likes. 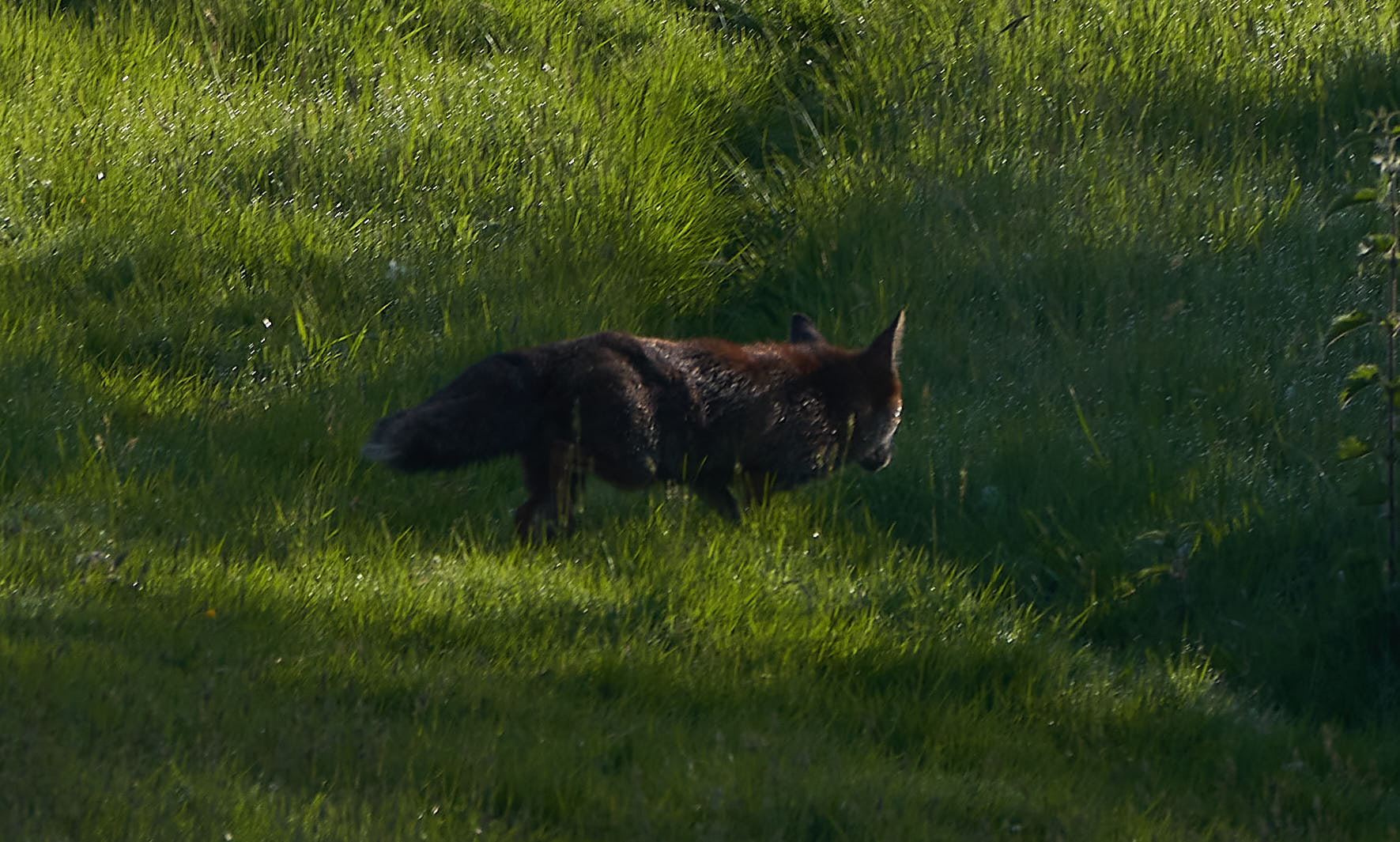 1 Response to Stories from the Early Morning